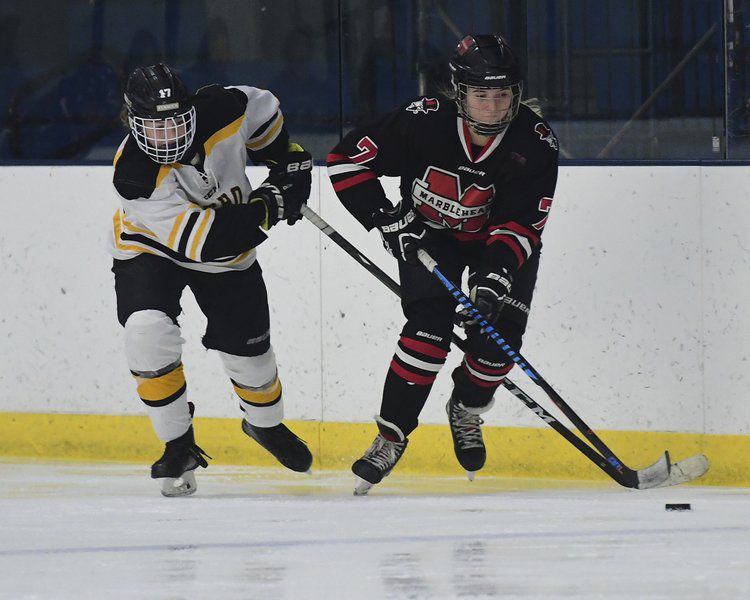 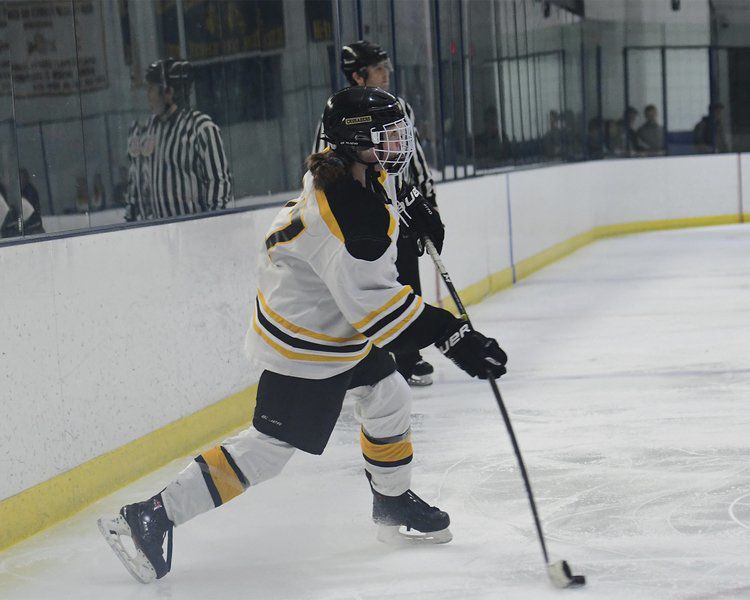 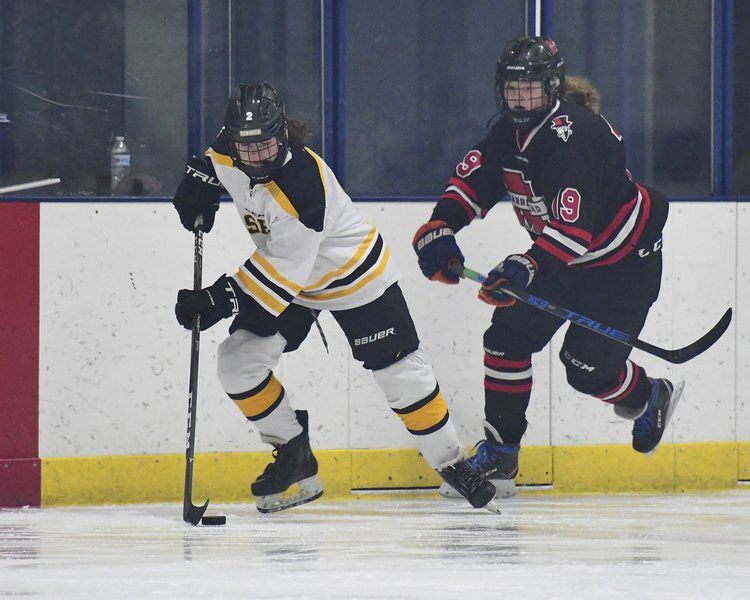 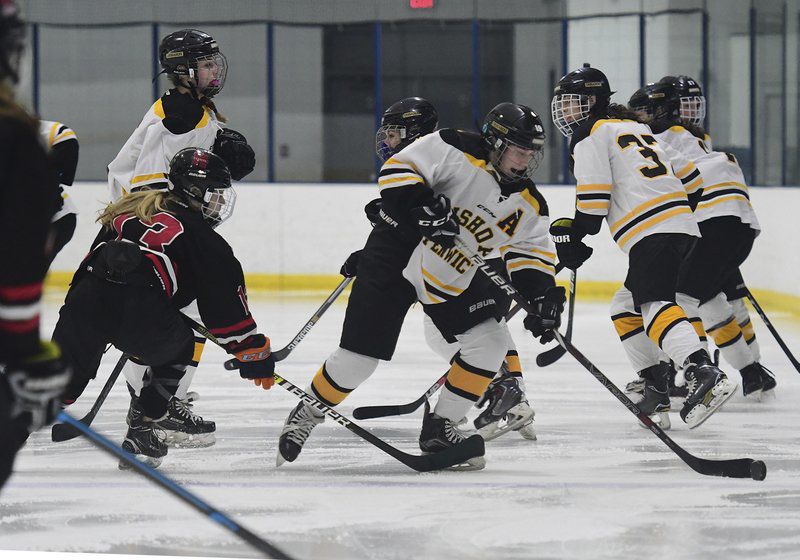 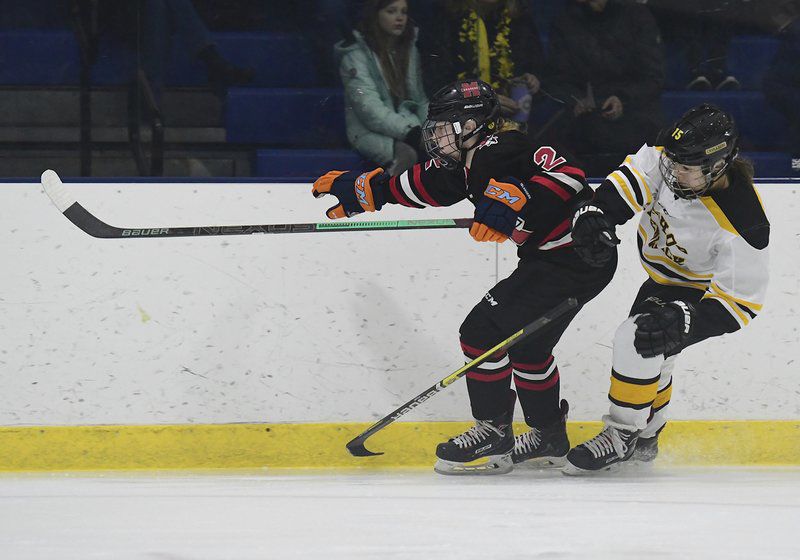 Madison Twombley had both goals for Marblehead Sunday morning and pulls away from Fenwick's Abbey Millman here. Rose Raymond photo 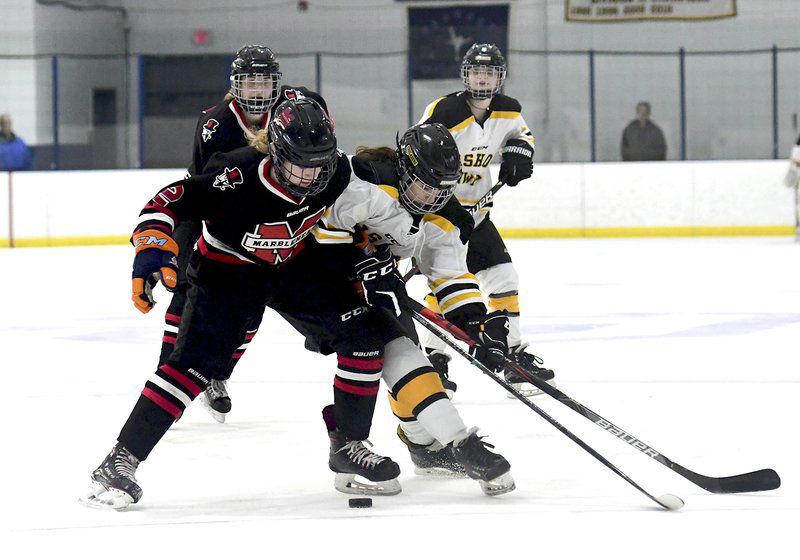 Madison Twombley had both goals for Marblehead Sunday morning and pulls away from Fenwick's Abbey Millman here. Rose Raymond photo

PEABODY — With every save Marblehead goalie Lily Francoeur made Sunday morning, the confidence of the skaters in front of her seemed to grow.

Bishop Fenwick's girls threw all manner of pucks at and around the Marblehead goal, but 8th grader Francoeur and the Lady Header defense stopped them all to score a 2-0 decision that was certainly their best win of the year at McVann-O'Keefe Rink.

Making her first varsity start, Francoeur stopped 30 pucks in all and the Lady Headers (3-5-1) got both goals off the stick of Madison Twombley. The game-winner came just 3:05 into the opening period and the insurance tally coming with only 2:32 left in the third. In between, a total commitment to team defense helped the visitors hold Fenwick (7-2-2) off the scoreboard.

"It's getting sticks on their sticks, being committed to what we're doing and our positioning," said Marblehead coach Ryan Wood, whose team tied Fenwick 2-2 a few weeks ago. "Fenwick's been on a tear since that tie so to hold them off the board is pretty good. For Lily, it's her first start, first win and first shutout all in one."

For much of the game, it felt like one goal might not be enough. Fenwick brought more and more pressure but the Lady Headers found ways to escape unscathed. When the Lady Crusaders drew a power play with 5:39 left in the third trailing by a goal, it was their golden opportunity to draw even.

Despite a variety of looks, they couldn't. Gabby Davern had a blast from the slot saved by Francoeur, Lauren Dirarian's bid sailed over the cage, Abbey Millman had a backhander deflected at the last moment by a defenseman — and these were just a few examples of quality chances that didn't hit the back of the net.

"We kind of ran into Ken Dryden from the 1970's," said Fenwick coach John Kastle. "That goalie was outstanding. Not to take anything away from the rest of Marblehead's team, because they played hard and played well, but that's a perfect example of what can happen in hockey when you run into a hot goalie."

The Lady Headers drew confidence in part from playing with the lead. Twombley took care of that when she swept Molly O'Handley's rebound under a diving Cailyn Wesley (13 saves) early in the opening period. Her other tally, and team-leading fourth of the year, was unassisted after she stole the puck and finished.

"Maddy's got a great sense of the puck," said Wood. "And she does a lot more for us besides scoring. She'll put her body between shots in the defensive zone, she's a hard worker and an unselfish player."

Defensively, captain Abby Kalinowski had a strong outing for Marblehead along with Hannah Tsouvalas and Brooke Brennan. Though they were outshot 30-14 for the game, the Lady Headers did a decent job making sure a fair number of those shots came outside the most dangerous areas of the ice.

Playing for the second straight day after beating Matignon Saturday night didn't help the Crusaders, but Kastle didn't feel like tired legs had much of an effect on his team.

"Maybe in the first five or six minutes, but after that I don't think it was fatigue," the first-year boss said. "To be honest, overall, I like our game today better than last night even though we won. We moved the puck better, we executed better. We did everything but score ... everything we tried, Marblehead's goalie had the answer."

Defenseman Grace Morey had a strong game for the Crusaders, as did Catherine Salvo, in terms of controlling the puck at the offensive blue line. Both had multiple slappers on net saved by Francoeur in crunch time.