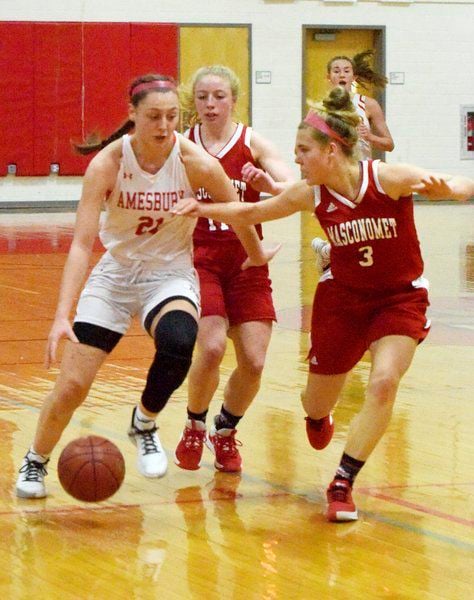 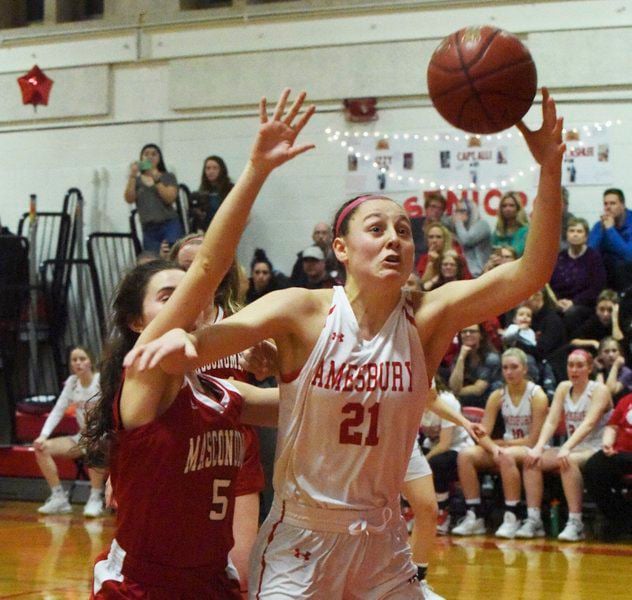 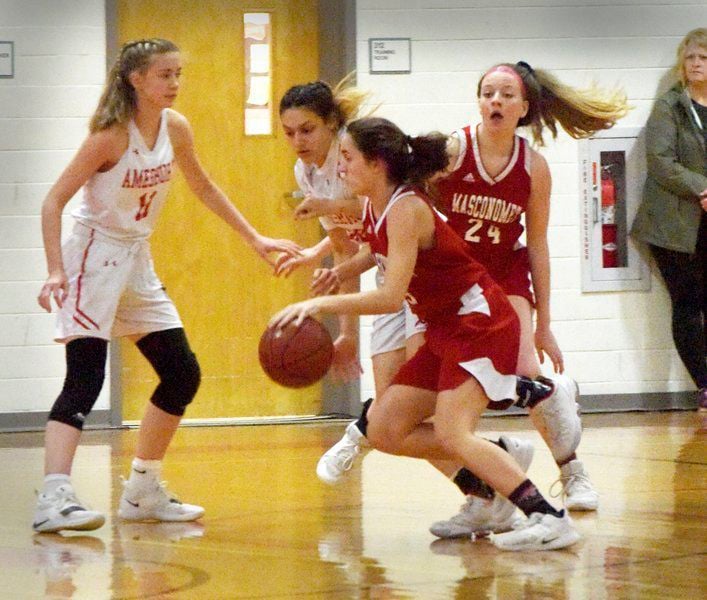 AMESBURY — It seemed like the wait would never end.

After a leaky roof postponed what was expected to be Alli Napoli's 1,000th point celebration last Friday, the Amesbury girls basketball senior went into Tuesday's tilt with Masconomet needing just 13 points to reach the milestone. Napoli electrified the standing room only crowd with a series of early baskets, but went into halftime kicking herself after a missed free throw left her one point short going into the break.

That last point proved stubborn, especially after Napoli missed two subsequent free throws to start the quarter. But the brilliant point guard wouldn't be denied for long, as Napoli finally broke through and achieved the milestone after putting back her own miss under the basket, becoming the third player in program history to reach 1,000 career points.

A short time later, she and her teammates were also celebrating their best win of the season.

Amesbury pulled out a thrilling 48-42 win over Masconomet, holding off a late Chieftains' charge to improve to 15-1 on the season. Napoli finished with 14 points on her big night and sophomore Avery Hallinan led the way with 23 points. Mak Graves led Masco with 13 points, including a huge 3-pointer with under two minutes left to get the Chieftains to within two points before the Indians pulled away.

"To be honest, beating Mak and having Masco come here and having a huge crowd, and especially all the fans, my family is here, my teammates even they were hyping me up before the game, they really inspire me," Napoli said afterwards as a gaggle of young Amesbury fans gathered around for her autograph. "I'm truly honored to be on that banner with Ashley Waters and especially my good friend Flannery [O'Connor], I'm so excited and I can't believe what's been going on."

Napoli scored her historic basket with 7:00 minutes remaining on the third quarter clock, after which point the Indians seized control of the game on both sides of the ball. The Indians held Masco to just three points in the quarter, utilizing a 13-3 run to go into the fourth leading 35-27.

Masconomet didn't go quietly, however, fighting back over the final minutes and making it 40-38 after Graves' big three. After Amesbury called timeout, Napoli and Hallinan stepped up and finished the game, with Hallinan scoring four points in the final minute while Napoli nabbed a steal and an assist to Gabby Redford in transition to seal the deal.

"We had to slow down, man," said Amesbury coach Gregg Dollas of the final minutes. "We were trying to rush and get quick baskets, we were shooting with like 20 seconds left on the clock, we need to run it down better. I think we'll learn from that, we'll practice it more because we're going to be in some close games."

Despite the intense atmosphere, Masconomet played with poise and kept Amesbury from pulling too far in front. The Chieftains ultimately couldn't get enough offense going, however, and coach Shannon Kirwan said that was ultimately the thing they'd need to do better going forward.

"(We need to) hit a shot, particularly not go ice cold like we did in the third quarter and only come up with three points," Kirwan said. "If we want to compete with anyone in the state tournament, we have to produce offensively. Holding a team like that to 48 isn't necessarily a bad night, but we have to either dig in even deeper and hold them to 38 or we need to score."

Amesbury will now face Ipswich on Thursday while Masconomet (10-4) dropped its third straight in CAL play (and third in the last four overall) and looks to rebound against league-leading Pentucket.