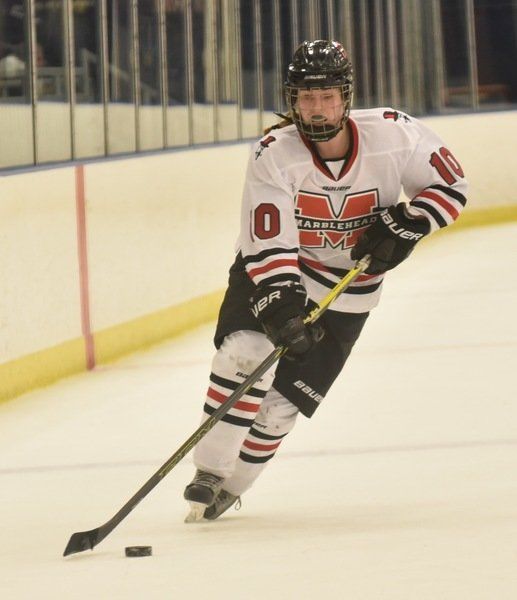 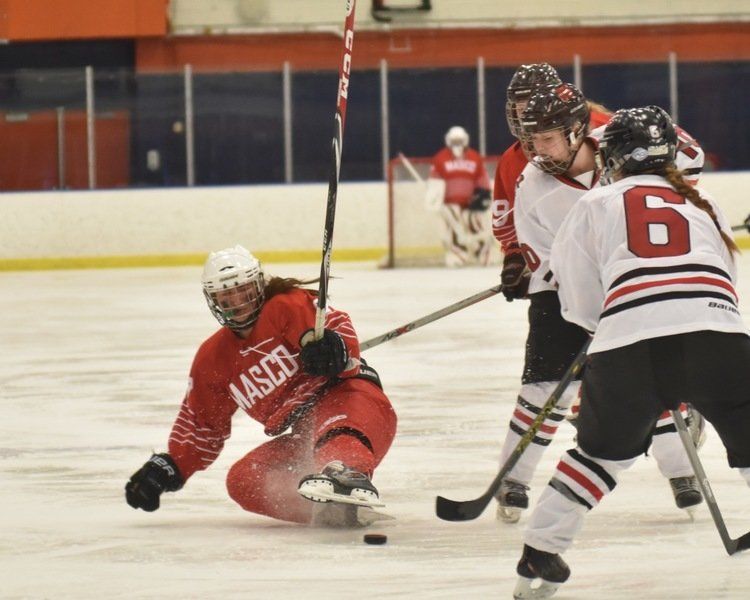 Marblehead’s Emmarose Winder (10) attempts to work the puck past this sliding Masconomet player during last night’s game at the Rockett Arena in Salem. Marblehead captain Caroline Hughes (6) comes in to help out Winder. 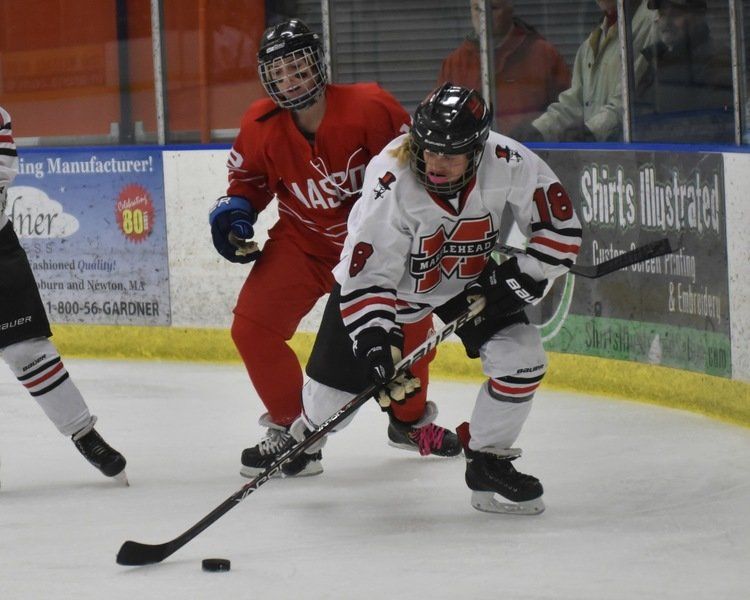 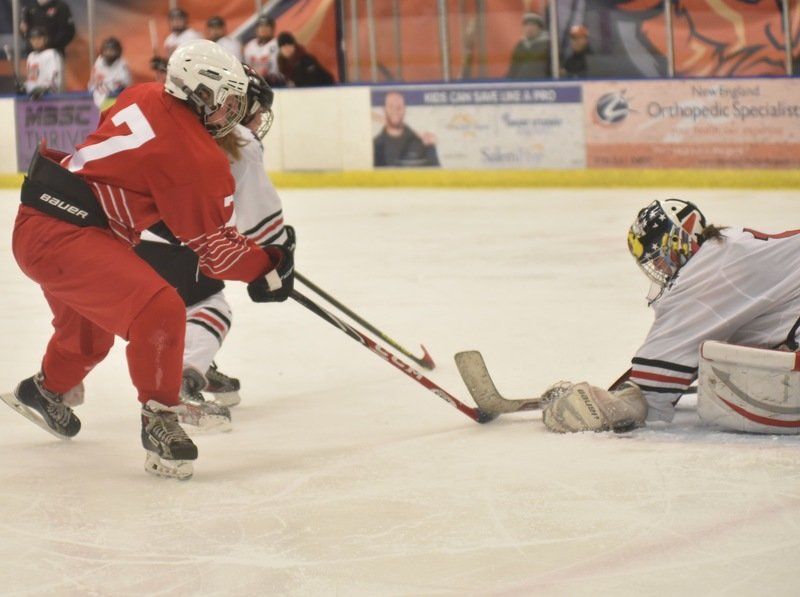 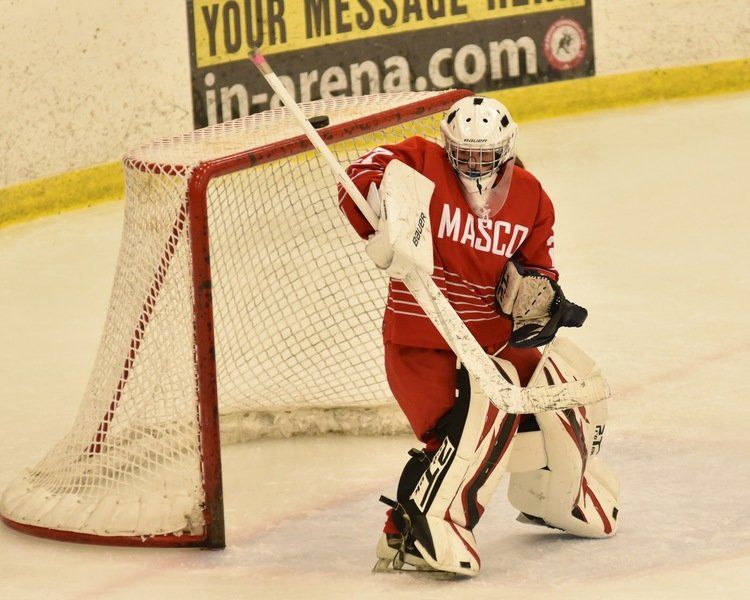 Molly Kelly makes one of her 23 saves for the Masconomet girls hockey team last night in its 6-2 victory over Marblehead.Rose Raymond photo 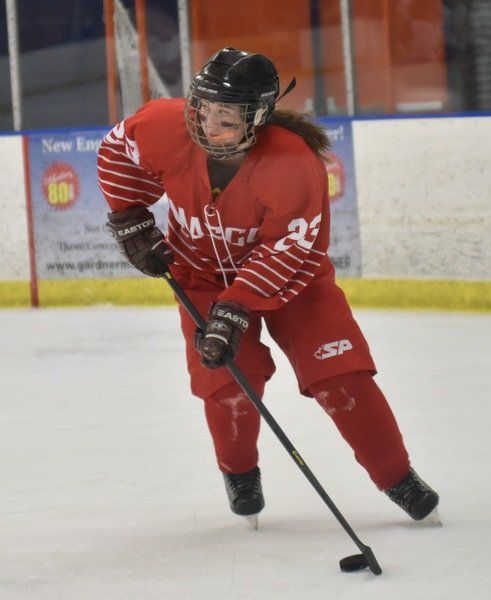 Marblehead’s Emmarose Winder (10) attempts to work the puck past this sliding Masconomet player during last night’s game at the Rockett Arena in Salem. Marblehead captain Caroline Hughes (6) comes in to help out Winder.

Molly Kelly makes one of her 23 saves for the Masconomet girls hockey team last night in its 6-2 victory over Marblehead.Rose Raymond photo

SALEM — The goals came in bunches at Salem State’s Rockett Arena last night, so after the Marblehead ladies scored twice in 47 seconds to make it a game visiting Masconomet returned the favor.

The Chieftains potted a pair 31 seconds apart late in the third to pull away from the Lady Headers and win 6-2. It was the third straight victory for Masconomet, which is now 6-4-2 and led 4-0 after two periods.

”I told the girls between periods that four goals wasn’t secure. We had to play better than we did in the second period, because the teams in this league are really good. You never know what you’re going to get,” said Masco coach Ryan Wood, whose team is 5-1-1 against Northeastern Conference foes.

Brooke Keough scored her team-leading 14th goal of the season at 5:25 of the third when she used a fast start-stop-and-shoot move to beat Masco goalie Molly Kelley. It was the first goal allowed by Kelley (who made 23 saves) in nearly 130 minutes of play.

Shortly thereafter, Masco took a too many men on the ice penalty and Marblehead’s Emmarose Winder tipped in Hadley Woodfin’s shot to make it a two-goal game at 4-2 with just under nine minutes to go.

”We were working hard, but couldn’t get the puck to bounce the right way until then,” Marblehead coach Emily Hudak said after her team fell to 3-5-2. The Lady Headers put nine shots on Kelley in the second period alone, but couldn’t get one by the Masco goalie.

”I think part of it is the mindset, we maybe psych ourselves out a little. If we’re able to get one to go in a little earlier things might feel a little different.”

The Chieftains regrouped and ended up scoring their second shorthanded goal of the game with 2:28 to go to put it away. Maddy Werner cut to the front of the net and finished, assisted by her penalty killing partner Charisse Flanagan. On the next shift, Flanagan broke in and scored a goal of her own to send Masco to its third straight victory comfortably.

”We took that penalty (that led to Marblehead’s second goal) but the girls didn’t let that get in their heads,” said Wood. “They understood to let it go and battle the rest of the way, and that was big for us.”

Besides the strong play of Kelley in net, Masco’s rotation of six defensemen did a good job keeping Marblehead’s shooters away from the cage. Meg Hubbard, Lily Dow, Sydney Shreenin, Madi Brooke, Brynne O’Connor and Meagan Aponas were fresh throughout and seemed to wear down Marblehead’s attackers.

Masco jumped ahead when Izzy Sarra scored the first of her two goals just three minutes in. Jensena Moner broke in alone shorthanded in the first, and tucked it behind the pads of Lady Header goalie Aly Hopkins (22 saves) to make it 2-0.

”Masco has some girls with good skill,” said Hudak. “They did a good job of making sure they got their shots off, and of creating chances.”

Sarra’s second tally made it 3-0 in the second and Rachel Duval netted her first of the year for a 4-0 edge after two stanzas.