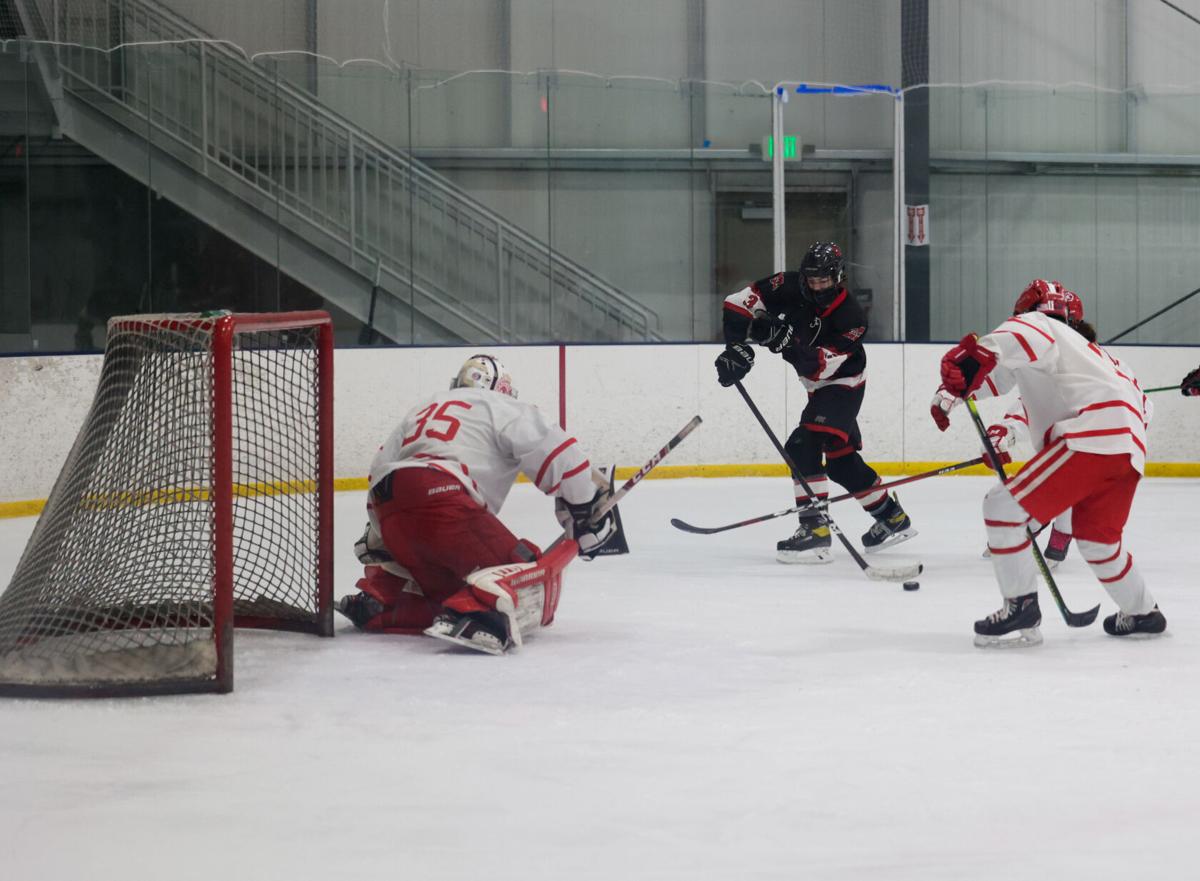 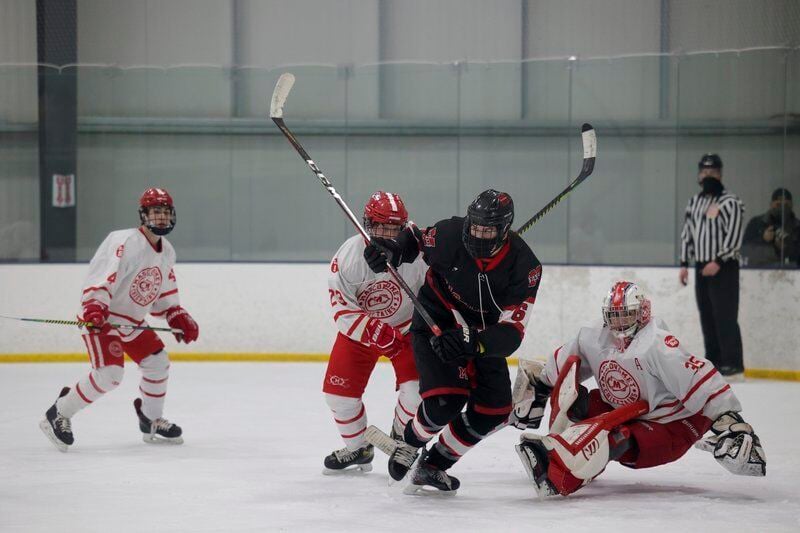 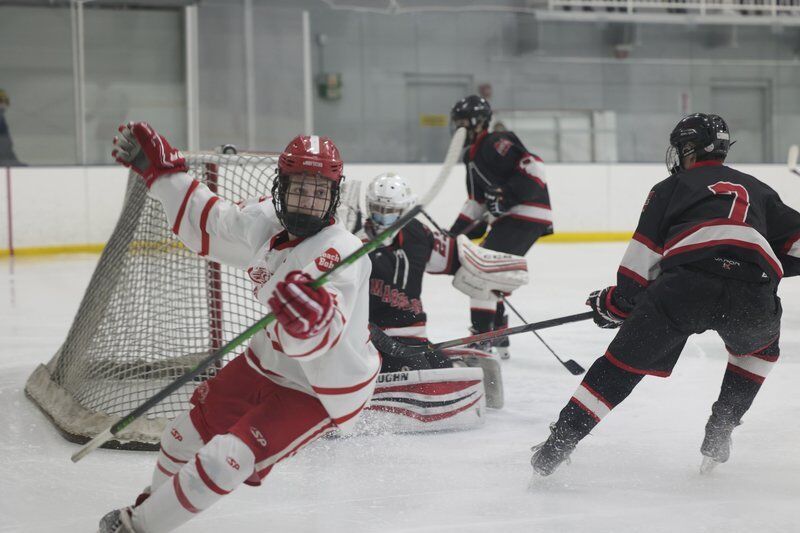 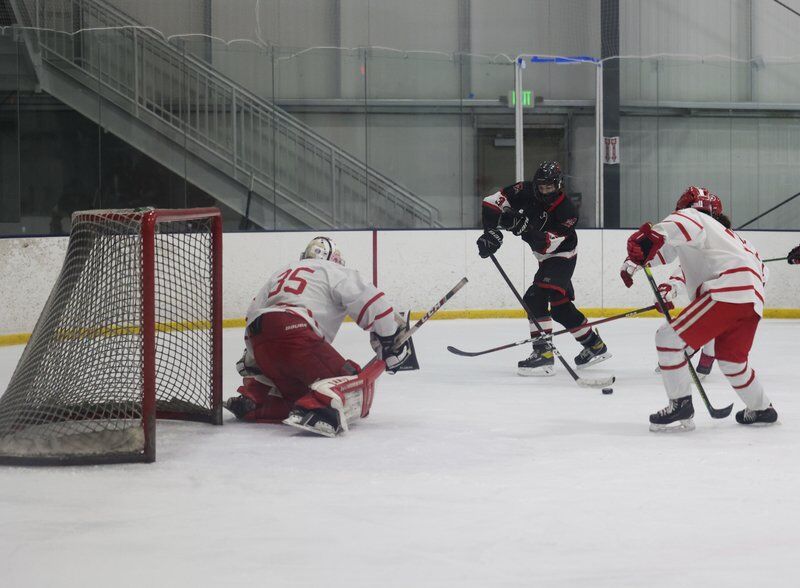 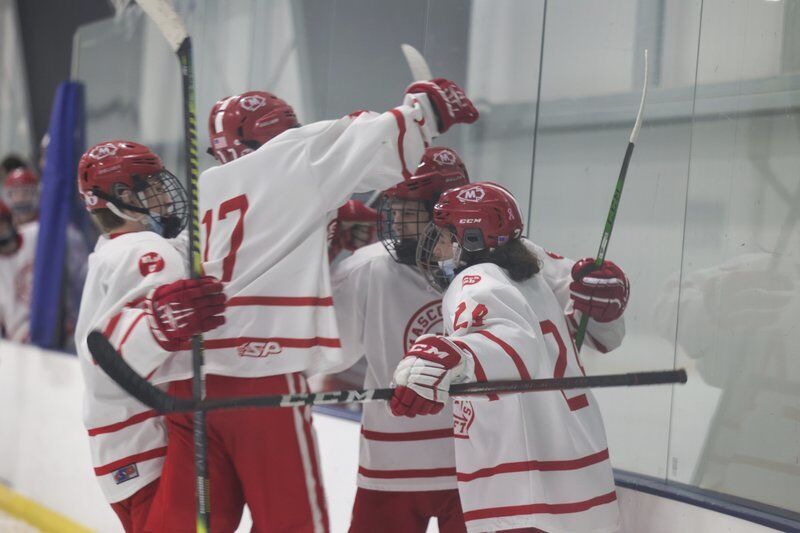 Masconomet players celebrate one of their six goals during Saturday night's 6-3 win over Marblehead, which clinched a share of the Northeastern Conference North crown. Jared Charney / Salem News

MIDDLETON — The final buzzer sounded, and both teams gathered to embrace on the ice.

For Masconomet Regional, it was a celebration of joy after the team's third straight league title — and first as new members of the Northeastern Conference — after conquering Marblehead, 6-3, Saturday night at the Essex Sports Center. The Chieftains finished tied atop the NEC North with Winthrop, each finishing this shortened season with 19 points.

Nearby, the Headers' players also gave each other hugs, but of the consolation variety. Down two of their regular defenseman (including the team's top blue liner, junior Aidan Jalbert) for this contest, Marblehead was clearly gassed in the latter stages of the second period and for much of the third, when they tried valiantly to cut deeply into Masco's lead but were unable to do so.

Veteran Masconomet head coach Andrew Jackson, whose team got a pair of goals from Jason Hurford in the third period to help cement the win, said he was proud of his team for the commitment they made to the program and each other, with many of his players choosing to attend classes remotely from home so as to lessen the chances they could become a close contact to someone who may have been exposed to COVID-19. As a result, the Chieftains had virtually no shutdowns this winter.

"They approached the situation maturely and decided this was something they wanted to do," said Jackson, whose team avenged an earlier 6-4 loss to the Headers. For the season, Masconomet, which finished 9-2-1 overall, averaged 4.75 goals per game.

"For starters, Lucas Canelli was stellar in goal in his final high school game (23 saves), especially on the penalty kill. We got some strong work on the kill from a pair of seniors on defense, Trevor Currier and Parker DeFeo, and (fellow senior) Jacob Mair had a great all-around game on defense. We were also able to get our three senior forwards, Jason, Aaron (Zenus, who also scored) and Tony Tozier a half-dozen shifts out there together, which was nice for them in their final game."

Aside from their six power play opportunities (resulting in a pair of goals), Marblehead had difficulty maintaining any offensive jump against the deeper and speedier Chieftains. They never led and, despite herculean efforts from the likes of captains Will Shull, Charlie Titus and J.T. Monahan, as well as fellow senior Ian Cody, goalie Nate Samuels (20 saves) and others, it wasn't to be.

"We just ran out of gas. That's not complaining; that's just a fact," said head coach Chris Wells, whose Headers finished 8-4-1. "Losing a chance at the league title is frustrating and disappointing, but it certainly wasn't for lack of effort. I have a ton of respect for these kids for how hard they worked and battled through injuries and bumps and bruises to give it everything they had."

Junior winger Eli Feingold potted a pair of goals for the Headers, giving him 12 in 13 games. The second of those came after a turnover just inside the neutral zone, in which he broke in alone and Canelli and scored on a backhand, cutting his team's deficit to 5-3 with a little less than seven minutes to go. But that was as close as Marblehead got, and Hurford iced it with an empty netter in the final minute.

Nick McMillan, Josh Brann, Chris O'Grady and Zenus had the other goals for Masconomet, which took the lead 109 seconds into the contest and never relinquished it. While they were often on the penalty kill, Jackson was pleased with how "we were able to keep their shots to the outside and a great player like Shull (stationed at the right point) from doing any real damage with that big shot of his in close."

Aside from Feingold's two strikes, Hayden Leveroni added a rebound goal on the man advantage early in the third period, cutting it to 4-2.

With his team shorthanded on the back end, forward Connor Sheridan took a regular turn as a rearguard with Monahan, while Titus paired up with freshman Hogan Sedky.