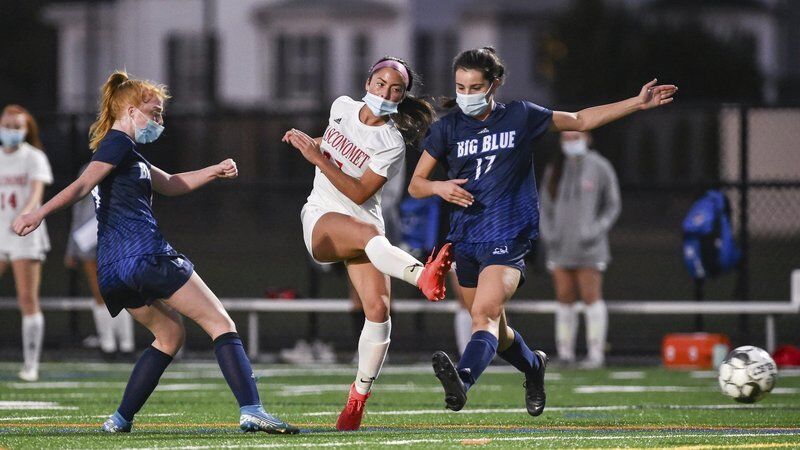 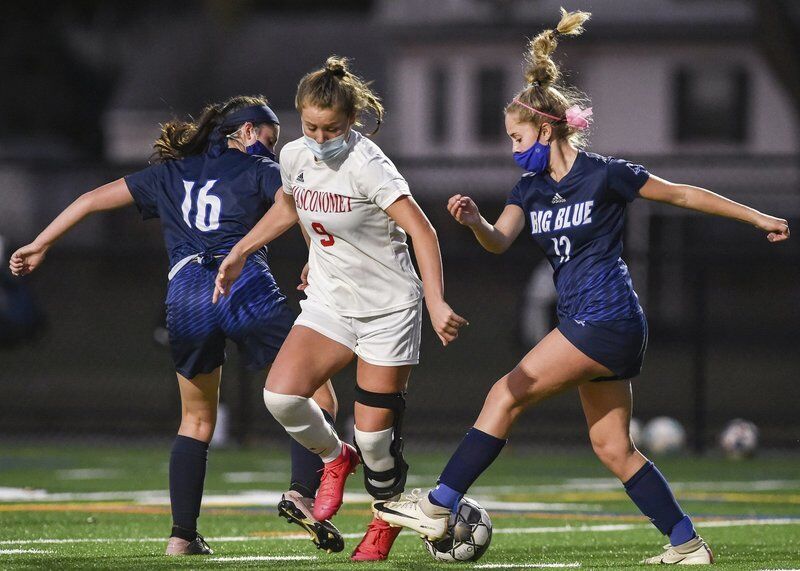 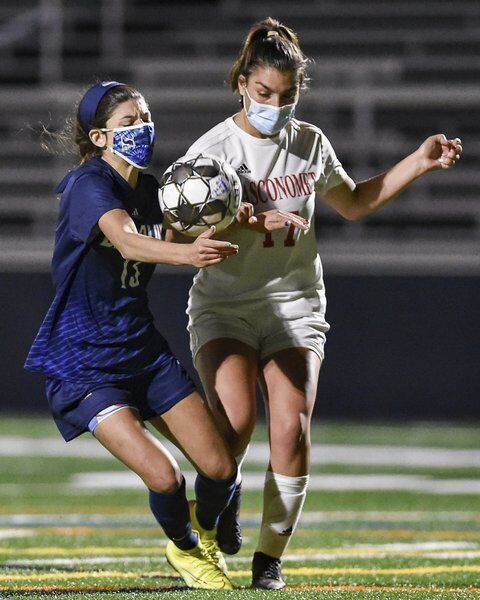 Swampscott's KK Kearney (13) is disrupted on her way to a goal attempt by Natalie Nolan (17) of Masconomet. JAIME CAMPOS/Staff photo 10/9/2020 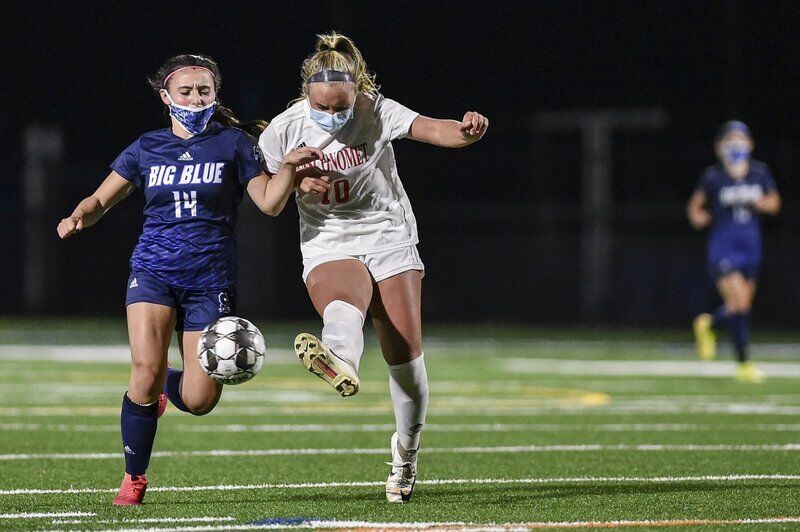 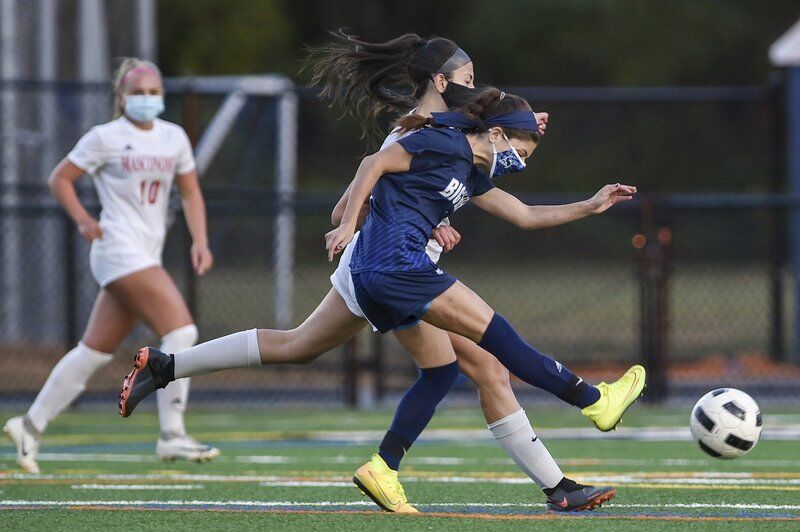 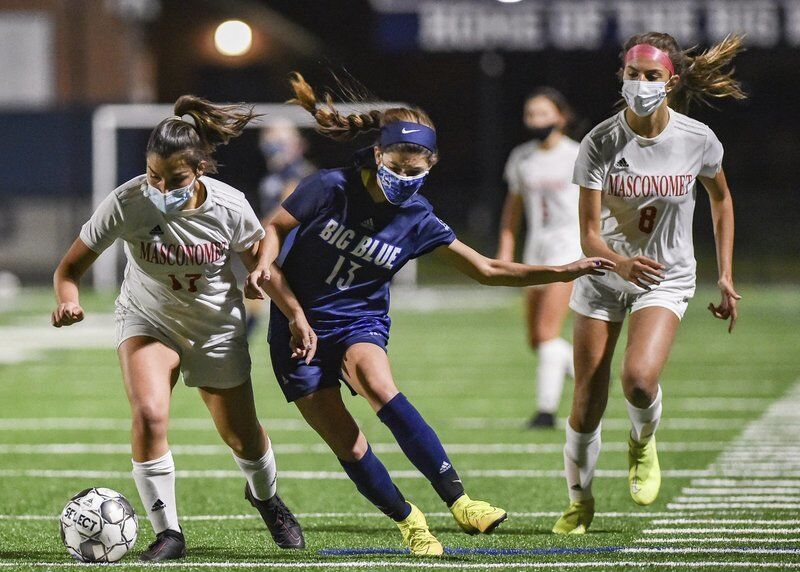 Swampscott's KK Kearney (13) loses control of the ball while being defended by Natalie Nolan (17) of Masconomet. JAIME CAMPOS/Staff photo 10/9/2020 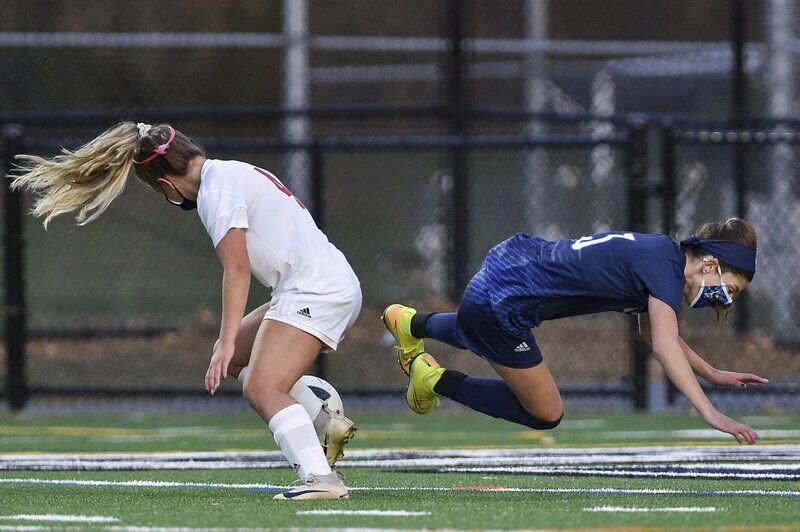 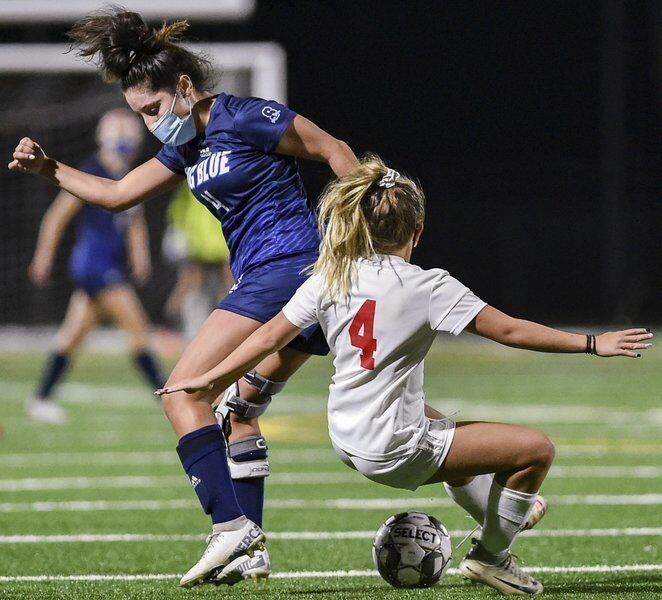 Swampscott's Sophie DiGrande (4) tries to get the ball from under Kylie DuMont (4) of Masconomet. JAIME CAMPOS/Staff photo 10/9/2020 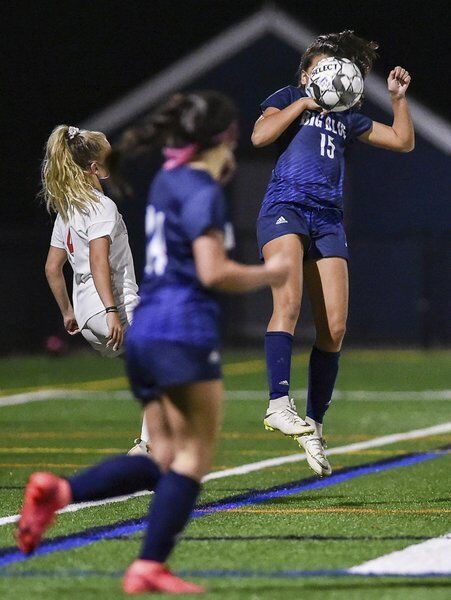 Priya Cooper (15) of Swampscott goes up for a 50-50 ball during a soccer match between Swampscott and Masconomet Friday.JAIME CAMPOS/Staff photo 10/9/2020 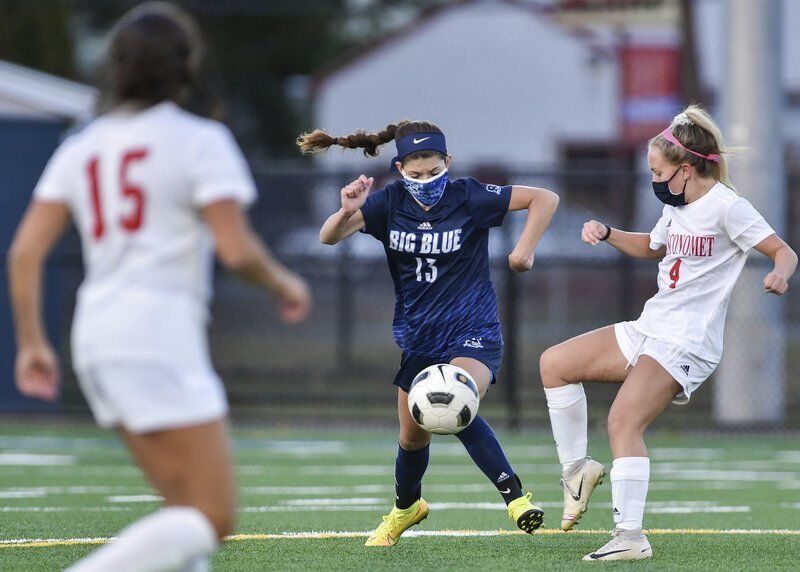 Swampscott's KK Kearney (13) is disrupted on her way to a goal attempt by Natalie Nolan (17) of Masconomet. JAIME CAMPOS/Staff photo 10/9/2020

Swampscott's KK Kearney (13) loses control of the ball while being defended by Natalie Nolan (17) of Masconomet. JAIME CAMPOS/Staff photo 10/9/2020

Swampscott's Sophie DiGrande (4) tries to get the ball from under Kylie DuMont (4) of Masconomet. JAIME CAMPOS/Staff photo 10/9/2020

Priya Cooper (15) of Swampscott goes up for a 50-50 ball during a soccer match between Swampscott and Masconomet Friday.JAIME CAMPOS/Staff photo 10/9/2020

SWAMPSCOTT — With Masconomet's girls soccer team having nearly hit double-digits in goals in its first game of the 2020 season, you couldn't blame Swampscott for seeing itself as a bit of an underdog in Friday night's Northeastern Conference bout under the lights at Blocksidge Field.

After surviving an early storm, the Big Blue found their footing and used the new 20-minute quarter structure to its advantage while securing a well-played 1-1 draw on a chilly evening.

"I think the timing makes the game easier to manage. It's like, 'alright we hold them for 20 minutes then we get a break.' It's very much like a basketball game now where you almost want to win a quarter and see where it goes," said Swampscott coach Ken Leeder, his club earning its first point at 0-1-1.

Big Blue captain K.K. Kearney netted her team's first goal of the young season in the 14th minute of the second quarter (34th minute of play) with a tremendous effort inside the attacking box. Kearney used both feet to dribble horitonzally to the center of the field before uncorking a rifle of a shot to the top corner.

The hosts held the lead through halftime but the unbeaten Chieftains (1-0-1) proved impossible to hold off the board. The Bovardi sisters combined for a tally in the third quarter with sophomore Taylor making a blind pass to her left across the box to senior Morgan, who one-timed the ball home for the equalizer.

"What a great finish that was," said Leeder, whose team was on its heels a bit in the fourth quarter but made a big push over the final five minutes.

"Masco's an excellent team so I was ecstatic with the way the we played. It was a really good game. The officials were great, it was open and quick and they let the girls play a little bit out there."

For the Chieftains, defenders Lauren Hanson (a senior) and Natalie Nolan (a sophomore) each blocked potential game-winning goals in the fourth quarter. Both found ways to get their bodies in front of Big Blue striker Sophie DiGrande without fouling; with excellent defense also played by Masco sophomore Kylie DuMont it was a great example of the mix of youth and experience the Chieftains have on their back line.

"We've got some young players on defense and it's a great mix with the older kids that are leading and showing their example," said Masco coach Alison Lecesse. "They worked really well together."

Keeper Lillian Goesslin made six stops in the Big Blue net while sophomore Mia Schena had a strong all-around game. Maddie Hudson and Lily Raymond, both juniors, helped keep the Chieftains from getting easy looks at the cage as well.

For Masco, captains Olivia Guerriero and Allie Vaillancourt were in the middle of everything during the time the Chieftains controlled play. Junior Charlotte Meixsell also showed off good sense for the attacking end pushing forward along with Carissa Scannell.

"It was a pretty fast, pretty open game and I thought we adjusted to it well. It was a real test for us and our first game on turf," Lecesse said.

An up-and-down bout that saw both teams endure major swing of momentum should benefit the Chieftains and Big Blue as they continue their 10-game slates in the coming weeks.

"The NEC is just ridiculous," Leeder said. "We had Beverly the other day and they were very good. This team (Masco) is excellent, then you've got Danvers and Peabody ... there should be a lot of good soccer."