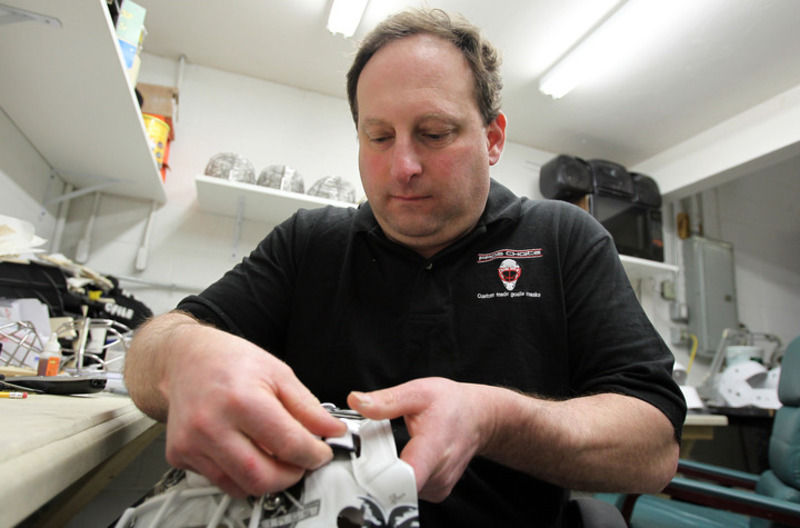 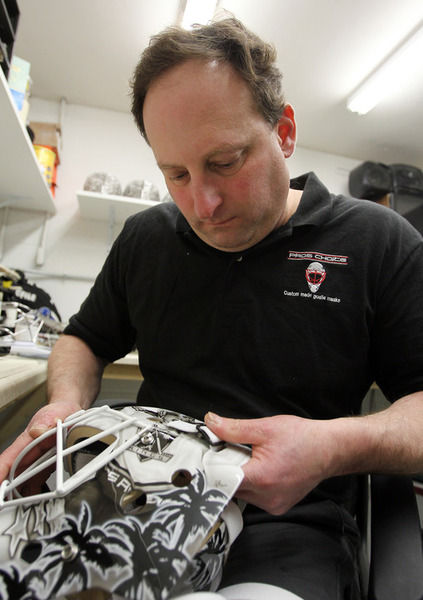 Middleton: Dom Malerba of Middleton makes masks for goalies all over the world, including numerous NHL players. David Le/Salem News 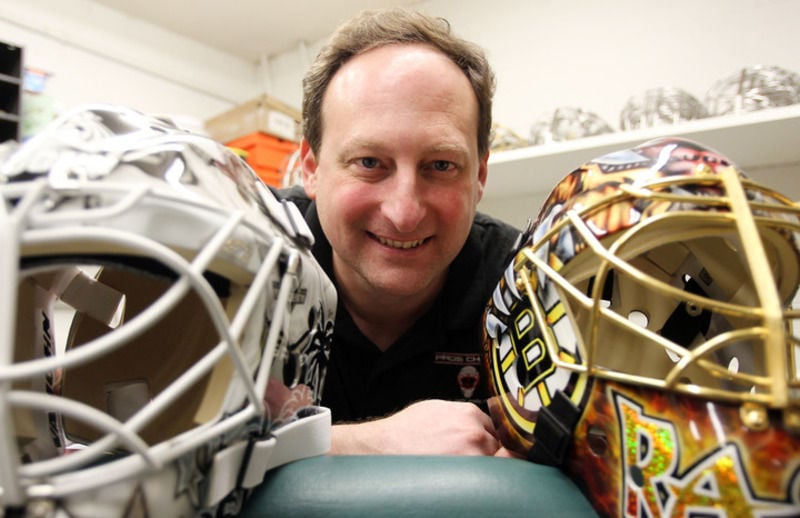 Dom Malerba makes goalie masks for netminders around the globe from his Middleton home, including those for Boston Bruins star Tuukka Rask and the defending Conn Smythe Trophy winner, former UMass Amherst star Jonathan Quick of the Los Angeles Kings. 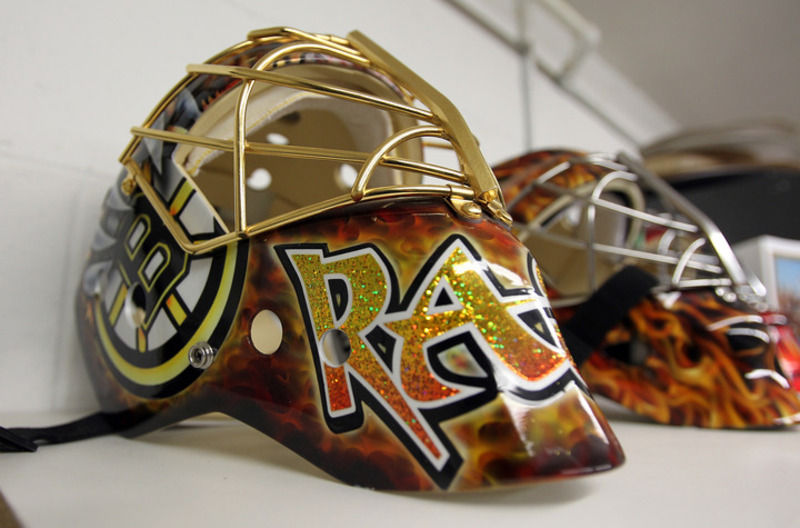 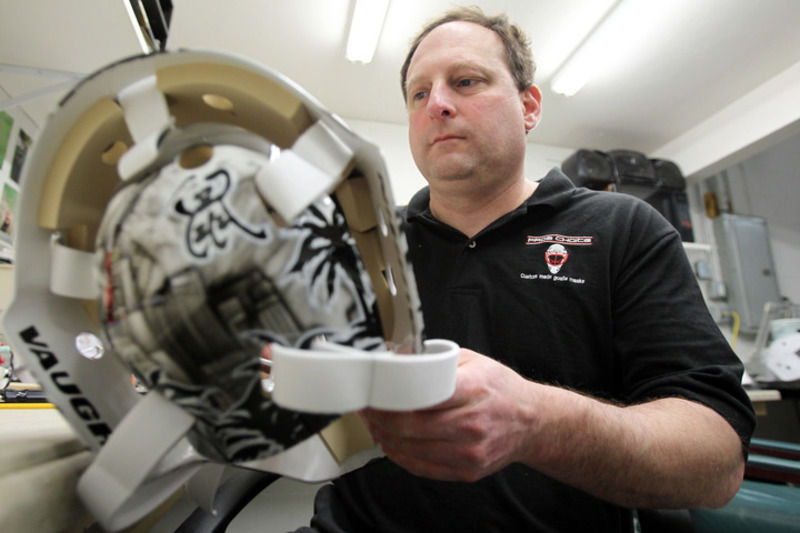 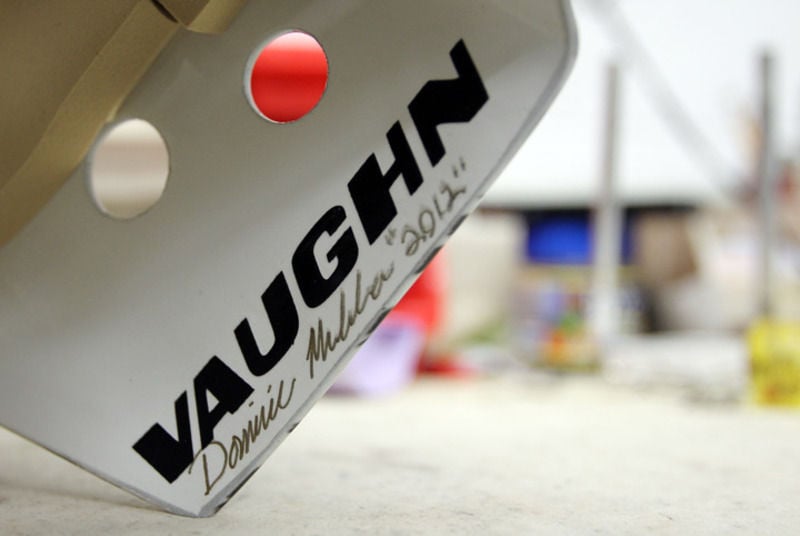 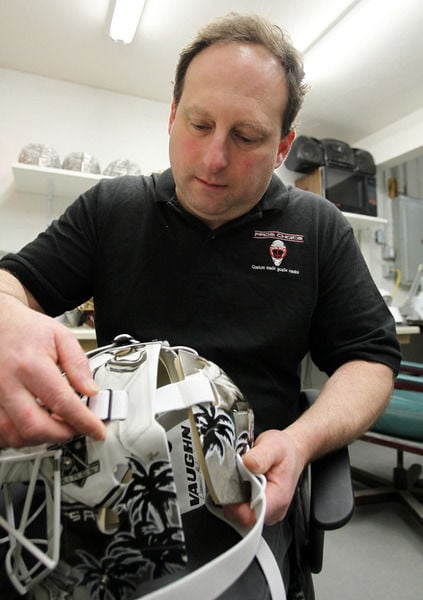 Dom Malerba of Middleton makes goalie masks for numerous NHL players. Malerba attaches the back plate on a mask and makes some finishing touches.

Middleton: Dom Malerba of Middleton makes masks for goalies all over the world, including numerous NHL players. David Le/Salem News

Dom Malerba makes goalie masks for netminders around the globe from his Middleton home, including those for Boston Bruins star Tuukka Rask and the defending Conn Smythe Trophy winner, former UMass Amherst star Jonathan Quick of the Los Angeles Kings.

Dom Malerba of Middleton makes goalie masks for numerous NHL players. Malerba attaches the back plate on a mask and makes some finishing touches.

MIDDLETON — It started out as a hobby.

It has grown into a booming business that reaches its satisfied customers — those who stop speeding pucks for a living — worldwide.

Dom Malerba has been designing and crafting custom goalie masks since 1986. Malerba’s Middleton company, Pro’s Choice, was selected by Vaughn Hockey to produce their National Hockey League and minor league masks. He has mastered the art of mask making over the past 30 years and established himself as one of the premiere go-to guys for custom helmets.

As a young entrepreneur, Malerba’s business venture didn’t take off overnight. But it got a helpful boost from a well-known goaltender at the time: then-Lynnfield resident Andy Moog of the Bruins.

“It was a hobby that just kept growing,” explained Malerba. “One thing led to another, and all of sudden things started to avalanche.

“Having Andy as one of my clients, other goalies would ask him where he got his mask made ... and it spread by word of mouth from there.”

As a kid, Malerba played hockey and became a goalie at Malden Catholic High School. He wanted a custom mask of his own, so he took a trip up to Canada to see a man who designed them.

“He was the only one around that made them at the time,” Malerba said. “This guy would take years to make one mask, and in some cases you wouldn’t even end up getting them. So I always said that if I was going to do this, I would get my masks out faster.

“I found out not only could I do it faster, but I was making them better. The goalies weren’t used to that. Sometimes masks could take up to two years, but pros don’t want to wait that long. They can’t.”

When he first began to fool around with the idea of making the masks, Malerba worked out of the shed in his backyard. From there his father gave him a place in his business to work on new ideas until he opened his own shop in Middleton.

“I remember doing the first one and if it wasn’t for my wife, I was gonna quit,” admitted Malerba. “It wasn’t as easy as I thought — it was an all-day thing. Certain things that take me 10 minutes today took me four hours back then.”

There was a lot of trial-and-error that went into perfecting the masks. Malerba taught himself what he could about constructing the masks, but he also attended many seminars.

To get the masks to fit perfectly, Malerba has goaltenders come into the shop to take molds of their faces. After Malerba has the proper forms, he can then customize the helmet and put on the cage, which he also designs and builds himself.

Malerba has several different cage designs, but it’s up to the goalies which one they decide to go with. It comes down to comfortability and preference when deciding which cage to put on the custom masks.

One cage in particular has a triangular bar running down the middle of the mask, which Malerba thought up while watching a TV show on building bridges.

“With the new composite sticks, the puck is going so much faster and the (shot) impact is harder,” Malerba said. “When they were building these bridges, they used triangles and I always knew it was the strongest shape. I developed a cage that incorporated the triangular form, which made the center bar stronger. It deflects the impact, instead of absorbing it. And it holds up.”

Before the cage goes on, Malerba sends the masks out to be painted to the individual goalie’s specifications. When he first started out, Malerba did the painting himself (including Moog’s Bruins mask), but now sends them out to be airbrushed — although he still helps in the design aspect.

Rask’s mask, for instance, is plated in 24-karat paint ... Malerba’s own idea.

“Sometimes goalies know exactly what they want, and sometimes they ask for my input,” said Malerba. “I give them suggestions and let the painters know what to do.”

The masks then get shipped back to Middleton before Malerba applies the final touches, which includes putting the cage on and sewing on the straps in back so that helmet fits properly.

When a pro goaltender is traded, he needn’t worry about getting his new team’s colors on his mask. Malerba has the process down to a science and is able to get a new custom mask out to a player within three days if need be.

His clientele isn’t limited to just NHL goaltenders, either; Malerba makes masks for all ages. The waiting list might be a long one, but his custom creations appear to be worth the wait.

During the NHL lockout, Malerba and business partner Paul Cena traveled up and down the West Coast to meet with goaltenders and came back to Middleton with a list of 30 masks that needed to be made.

Business has never been better at Pro’s Choice as Malerba continues to crank out his one-of-a-kind creations.

“I’m always trying to come up with new things to improve the product,” added Malerba. “I’m the only one in the world (who makes masks) as a full-time business. Nobody else does this.”