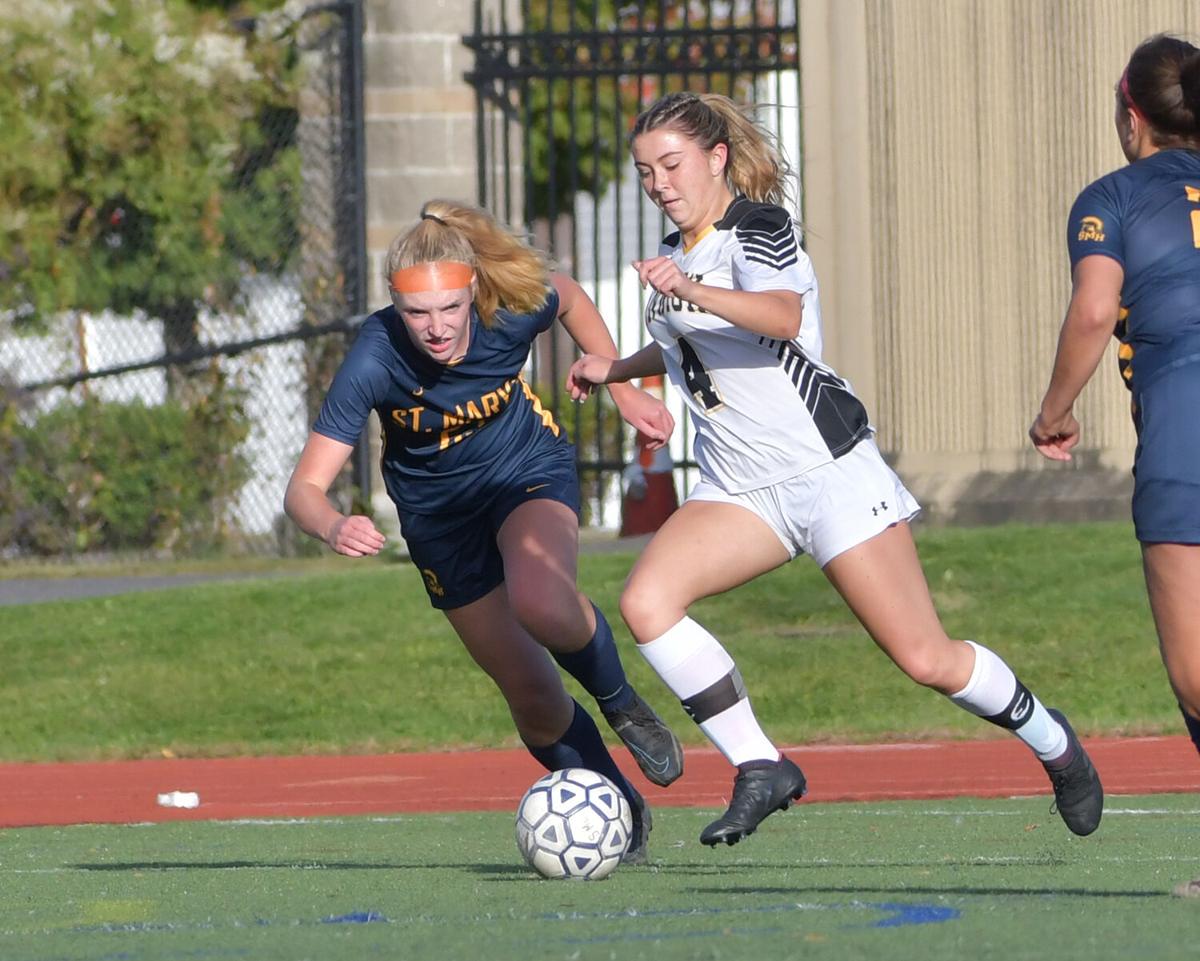 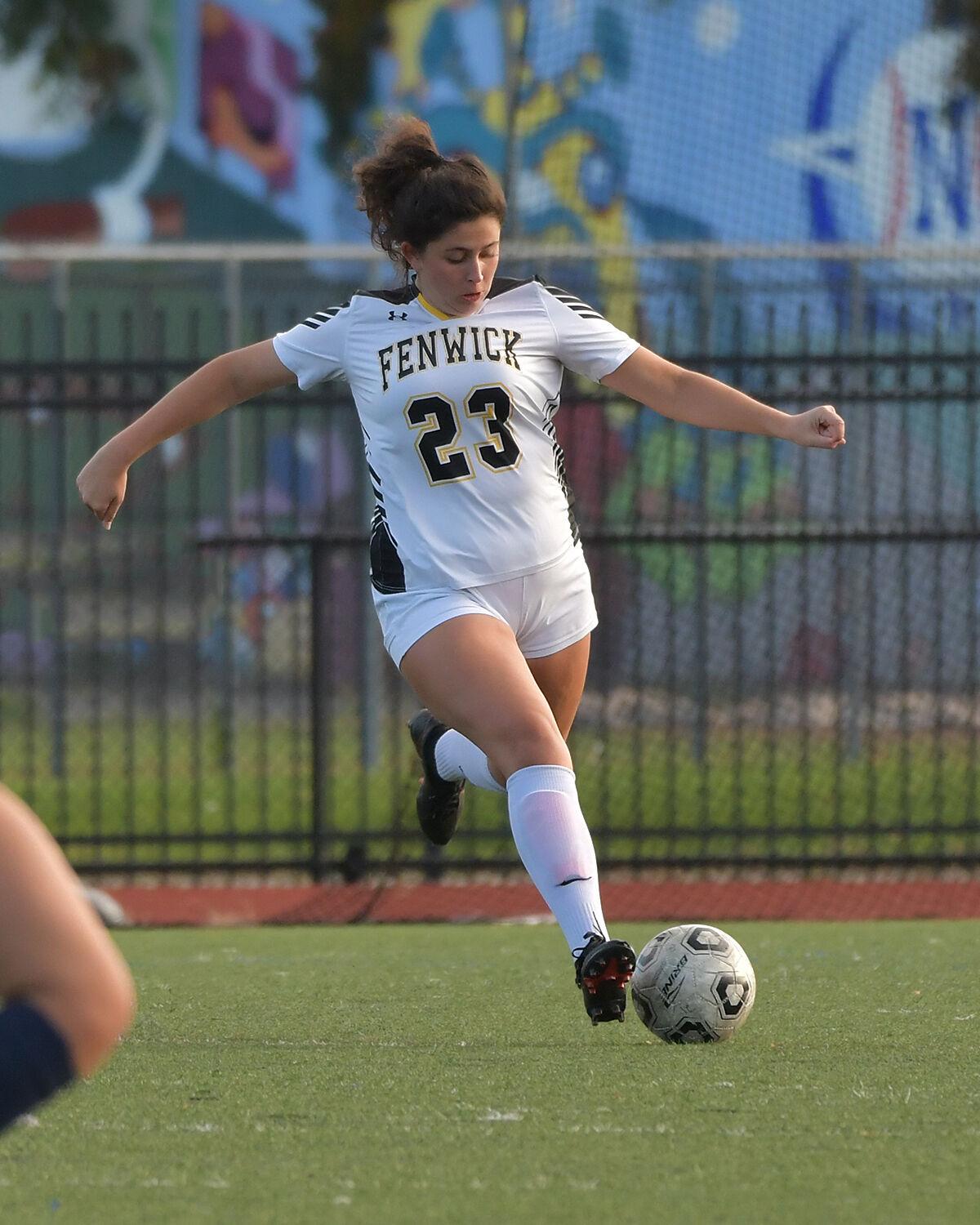 Bishop Fenwick's McKenna Gilligan is about to blast a shot upfield during Monday's win over St. Mary's of Lynn. 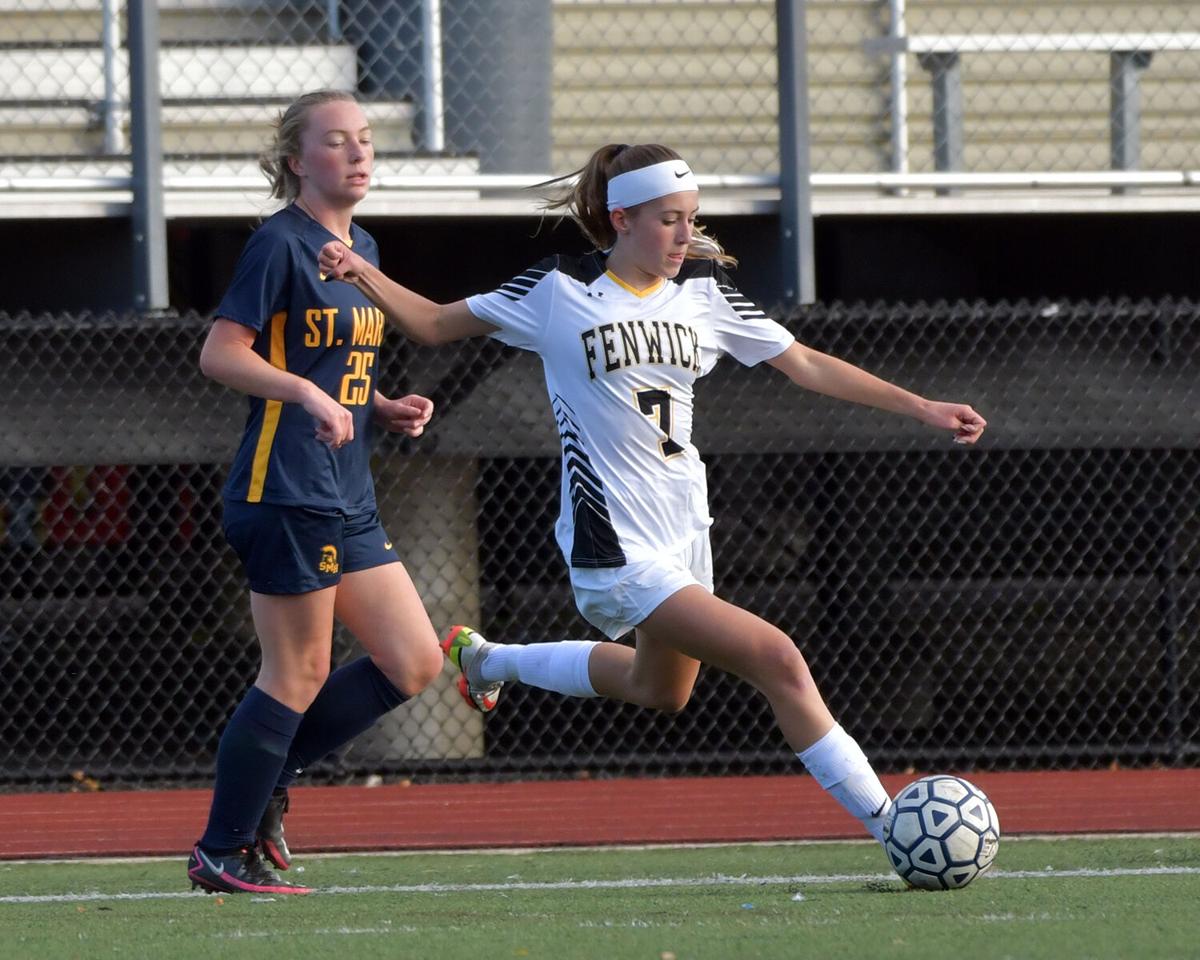 Skyliar Dempsey of Bishop Fenwick boots the ball away from a St. Mary's of Lynn defender during Monday's win.

Bishop Fenwick's McKenna Gilligan is about to blast a shot upfield during Monday's win over St. Mary's of Lynn.

Skyliar Dempsey of Bishop Fenwick boots the ball away from a St. Mary's of Lynn defender during Monday's win.

Swampscott's Spellios moves on to states: By shooting a 86 at Monday's Division 3 North sectional at the difficult Renaissance Golf Club in Haverhill, Lou Spellios of Swampscott High is moving on to the Division 3 state finals next Monday at Shining Rock Golf Course in Northbridge.

"Today I saw some of the most difficult playing conditions. I'm proud of Lou and his grit," Swampscott golf coach Jay Knowles said. "It's easy to get rattled when things don't go your way, but he battled all day.

Hamilton-Wenham's top finisher was Aidan Noonan, who finished in the middle of the pack with an 88.

Marblehead 2, Peabody 1: Oliver Buckhoff's rocket was the game-winner and Isaiah Pine also scored for the Magicians, who got a superb effort in net from Rory Zampese.

Beverly 7, Salem 0: The Panthers cruised to a shutout win.

Masconomet 8, Winthrop 1: Brennan Johnston had two goals and an assist while Nate Collins added a pair of goals as the unbeaten Chieftains rolled. Thomas Downs scored his first goal of the season for the winners, who also got tallies from Eion O'Brian, Simon Berents and Sam Brockelman (who added 2 assists). Kevin Pelletier and Marco Russo both played well in net, while Zack Peterson, Ara Scarpaci and Tanner Mandalinci also had assists.

Danvers 4, Saugus 3: Jake Ryan, a senior, had a pair of goals to give the Falcons an exciting win. Marcelo Caixeta and freshman Nate Flint also found the back of the net for the winners.

Gloucester 3, Swampscott 2: In a close battle, the Big Blue got goals from Valerio Tatafiore and Mason Bergeron as well as a helper from Lucas Bereaud.

Essex Tech 3, Hamilton-Wenham 1: Senior midfielder Jack Pais' goal in the second half was the eventual game-winner as the Hawks won their 13th game of the season. Sophomore Dylan Martin and junior Ryan Lovasco also found the back of the net for the winners, with Mateus Lima earning two assists and Lovasco one. Senior defender Austin Medico had an excellent game on the back line for Essex Tech.

St. Mary's Lynn 2, Bishop Fenwick 1: Ryan Morganstern had the goal for the Crusaders in their setback, assisted by Ryan Noci.

Hamilton-Wenham 3, Essex Tech 1: Claire Nistl potted a pair of goals while Jane Maguire also tallied for the Generals, who improved to 10-1-1 with the non-league victory. Ella Schenker, Chloe Gern and Lily Mark all had assists for Hamilton-Wenham, which had 15 shots and controlled play most the day. Goalie Stewart Bernard (2 saves) earned the win.

Masconomet 7, Winthrop 0: Elena Lindonen and Taylor Bovardi each finished with a goal and an assist while Charlotte Hill and Marcy Clapp split the shutout in net for the Chieftains. Abby Moore, Charlotte Meixsell, Samantha Schena, Alex Woodland and Kara Lindonen (assisted by her sister Elena) added solo goals for Masco, which got a pair of assists from Lauren Boughner and one from Carissa Scannell.

Bishop Fenwick 6, St. Mary's Lynn 0: The Crusaders blasted their rivals behind two goals from Ally Mitchell, a goal and an assist from senior captain Bella DelVecchio plus goals by Ella Demakes, Skyler Demsey, Haley Lawrence. Ella Morgan had a pair of assists for Fenwick (7-0-5), Amy Hatfield had one helper and Claudia Keith earned her 10th clean sheet of the season.

Beverly 5, Salem 0: The Panthers (6-5-1) climbed over the .500 mark led by a goal and an assist from senior Kayleigh Crowell and two tallies from Mia Bilotti. Anna Carbone and Izzy Sullivan also scored with assists from Maddy Young and Jenna Schweizer. Tatum Panjwani, Carly Jones and Lily McCarthy stood out for Beverly as well.

Masconomet 3, Swampscott 0: It was a sweep for the Chieftains.

Peabody 8, Revere 1: Senior captain Bella DeCicco scored a career high four goals and added one helper to power the Tanners to a blowout win. Fellow senior captains Gina Terrazzano and Jackie Scopa (assist) also had goals while junior Siobhan Smith and sophomore Kyra Buckley did as well. Goalie Gianna Degianfelice finished with three saves. It was Peabody's third non-league win in as many tries this season.

Ipswich 3, Georgetown 2: Ashton Flather had two goals, including the game-winner, to propel the Tigers (11-1-1) to their fifth one-goal victory of the season. Exchange student Linde Ruitenberg also notched a goal for Ipswich, which got assists from Lexi James, Chloe Pszenny and Ella Vogler as well as five saves from goaltender Morgan Bodwell.

Manchester Essex 4, Hamilton-Wenham 0: Despite a remarkable 26 saves from junior Maeve Clark, the Generals were unable to keep the powerful Hornets off the scoreboard completely. Marly Shea added a defensive save for Hamilton-Wenham (2-11-1).

For Salem State, freshman Ethan Doyle of Salem and teammate Brian Cannata each shot plus-9 to finish tied for 7th out of 141 individuals.