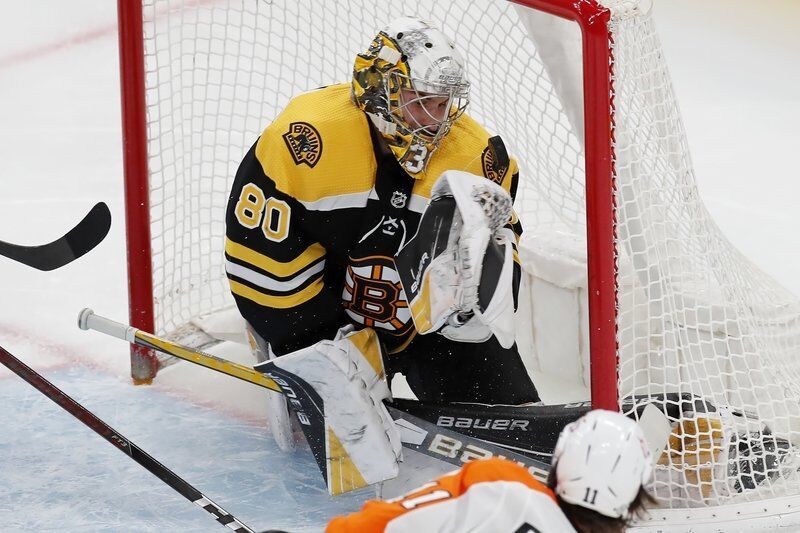 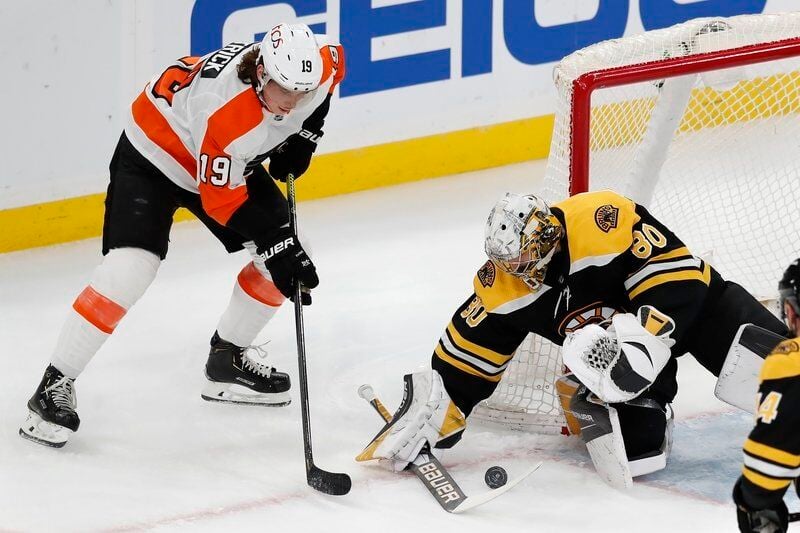 BOSTON — The two men wearing the synthetic leather pads in team colors, masks adorned to suit their respective personalities, and oversized hockey sweaters had a combined 208 minutes and 42 seconds of NHL experience between them.

Yet these two men, Dan Vladar and Jeremy Swayman, were the goaltenders at the Boston Bruins' disposal Monday night.

With Tuukka Rask still unavailable with what the organization continues to refer to as an 'upper body' injury and backup Jaroslav Halak having tested positive for COVID-19 prior to Monday's game, it was left to 23-year-old rookie Dan Vladar and his understudy, 22-year-old NHL newbie Jeremy Swayman, to keep the Philadelphia Flyers at bay.

In a bit of bizarre irony, it was the Bruins' senior statesman, captain Patrice Bergeron, who slipped and fell in overtime after having his shot blocked, allowing Philadelphia's Travis Sanheim to blow past him and in alone to roof the game-winner by Vladar.

In his fourth NHL start, Vladar had 26 saves in regulation and another three in the extra session. But the 3-2 loss meant the fourth place Bruins are now just three points ahead of fifth place Flyers for the final East Division playoff spot.

The two clubs meet again Tuesday night in Philadelphia, and it's very possible that Swayman will be making his National Hockey League debut.

It had been nearly four-and-a-half years — that'd be October 26, 2016 — since the Bruins dressed a pair of rookie keepers. On that night against the Rangers at Madison Square Garden, Zane McIntyre went the distance in a 5-2 loss while Malcolm Subban spent his night wearing a cap while opening and closing the door at the far end of Boston's bench.

Vladar, who noted postgame that he had "goosebumps" when the 2,200 fans in attendance were cheering for him, had denied Sanheim with a right leg save earlier in overtime after the Flyer D-man found himself alone at the far post. But down in the butterfly position, he couldn't get his 6-foot-5 frame up high enough to stop the night's final shot.

But his play wasn't the reason the Bruins lost.

The Prague native was at his scrambling best on a Flyers power play early in the second period. Travis Konecny threw a behind-the-back no-look pass from the low slot to Claude Giroux at the far post, and Vladar dove to make a stop with his right skate. Following the play behind the net, Giroux dished it back out front to Vladar's left, and the first-year pro got back across his crease post-to-post in time to deny him with a shoulder stop.

"I'm just living my dream out there," said Vladar, completely sincere in his postgame Zoom conference. "I just want to save every puck."

He also bailed out Charlie McAvoy as a Bruins power play elapsed with less than five minutes to go in the second after the puck skittered off McAvoy's blade and Flyers blueliner Justin Braun raced the other way. McAvoy got back to nudge him slightly off his stride, but it was Vladar who made the big stop to keep his team up by a goal (2-1).

"He never gives up on a play, which is what everyone loves about him," said head coach Bruce Cassidy.

Vladar, of course, made his NHL debut in the Toronto playoff bubble last summer, replacing an ineffective Halak in Game 3 against Tampa Bay. He stopped a dozen of the 15 shots that came his way in a 7-1 drubbing to the eventual Cup champions.

While only 15 months older than his fellow goalkeeper, Vladar is a grizzled veteran compared to the green Swayman when it comes to professional experience. Born and raised in Alaska, he has played nine games with Providence (all this season) before he got the call to come north up Route 95 Monday.

Although not quite as tall (6-2) or light (187 lbs.), Swayman had a fine career at the University of Maine, playing an even 100 games from 2017-20 after having been chosen by Boston in the fourth round of the 2017 draft. The Bruins feel he has skills, but almost certainly didn't see him suiting up for the big club at any point this season.

While he didn't see his first NHL action Monday, Swayman did get his preferred No. 1 uniform top, thus becoming the first Bruin to don the digit since the immortal Marty Turco during the 2011-12 campaign.

When asked if he'd be giving Swayman any advice Tuesday if he's chosen as the starter, Vladar noted he's "still asking Tuukka and Jaro for advice (for himself)." That's how young this Bruins netminding duo is.

So what happens from here? Do the Bruins, already in need of help on both the back line and up front in terms of secondary scoring, start making an aggressive push for a goaltender prior to next Monday's trade deadline? Do they put their eggs in Rask's basket, hoping his mystery ailment clears up in time for him to push them into the playoffs? Do they rely on a speedy recovery by Halak?

Or will they be forced to ride the rookies for this week at least, perhaps longer?

Is this what the Boston Bruins future looks like in net?

We're about to find out.

Phil Stacey, the Executive Sports Editor of The Salem News, covers the Boston Bruins for CNHI Sports Boston. Contact him at pstacey@salemnews.com and follow him @PhilStacey_SN