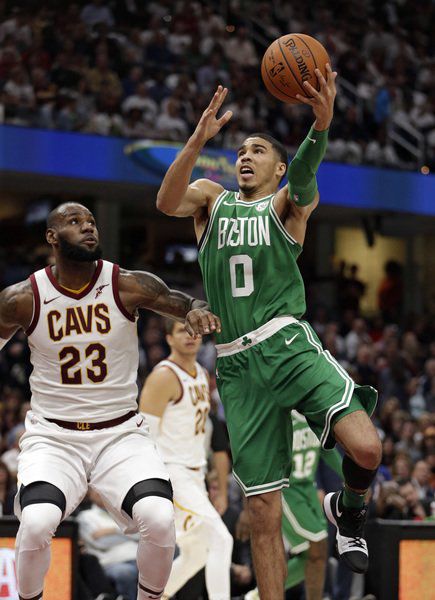 Boston Celtics rookie Jayson Tatum will be thrust into an even bigger role with Gordon Hayward's injury. (AP Photo/Tony Dejak) 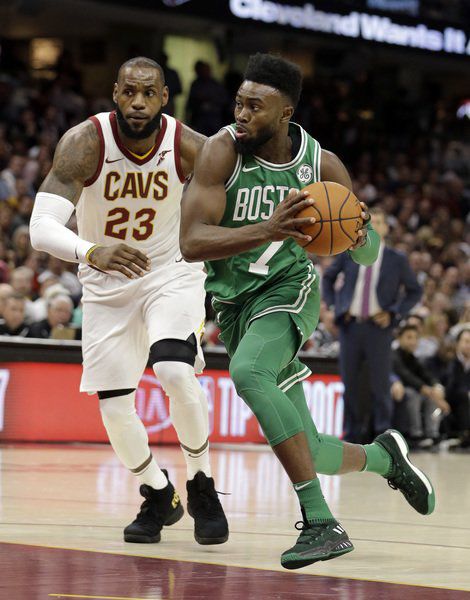 Jaylen Brown (7) is primed for a breakout sophomore season, and the Celtics will need him given all the moves they made in the offseason and the injury to Gordon Hayward. (AP Photo/Tony Dejak)

Boston Celtics rookie Jayson Tatum will be thrust into an even bigger role with Gordon Hayward's injury. (AP Photo/Tony Dejak)

Jaylen Brown (7) is primed for a breakout sophomore season, and the Celtics will need him given all the moves they made in the offseason and the injury to Gordon Hayward. (AP Photo/Tony Dejak)

We’ve all seen it by now, or for the weak stomached, at least heard about it: A fluke play where prized offseason acquisition Gordon Hayward landed gracelessly on his left ankle much to the chagrin of all the players, coaches, fans and anyone else in attendance at Cleveland’s Quicken Loans Arena. The atmosphere in the building went from playoff-esque to complete and utter silence in seconds.

Celtics’ head coach Brad Stevens confirmed prior to Wednesday’s home opener against the Milwaukee Bucks that initial reports of a dislocated ankle and fractured tibia were accurate, noting that surgery is likely to happen sooner rather than later. No timetable for Hayward’s return to the Green-and-White has been determined yet, but it would appear the Celtics will be without their coveted third member of the yet another new Big 3 for quite some time.

The big question is, where do they go from here? Finding an answer to that is virtually impossible at this point. But there’s one thing we do know: The plethora of young talent filling the seats on the Celtics’ bench will certainly have their chance to step up.

“Obviously we’re wishing Gordon well, that’s the first thing,” Celtics’ forward Al Horford said prior to Wednesday’s game. “His health is most important. Then we need to come together as a group and understand that other guys are going to have an opportunity to step up and we’re going to have an opportunity to grow our young guys and grow from this over the course of the year. In a way, I think it’s going to help some of the younger guys get experience and be put in a position they wouldn’t have been in.”

A proven veteran and reliable starter since coming to Boston, Horford’s role likely won’t change much at all.

But guys like touted rookie Jayson Tatum and explosive second-year player Jaylen Brown will undoubtedly see an immediate increase in court time. Brown dazzled in his sophomore debut on Tuesday, dropping 25 points on an efficient 11-23 from the field in a team-high 40 minutes of action. Tatum shook off a rookie-like first half to net a double-double with 14 points and 10 rebounds in 37 minutes.

Less than 24 hours later, Hayward graced the TD Garden Jumbotron with a video message to fans from his hospital bed before tip-off. At the conclusion of his emotional discourse, Tatum and Brown were both on the floor to start the game for a second straight night — and they’ll both be called upon time and time again in an attempt to fill their wounded teammate’s void.

“It’s definitely been tough,” Tatum said. “We’re just trying to keep Gordon in our prayers. When guys go down other guys gotta step up, so that’s what we have to do.

“I’m not trying to change anything yet, just trying to go out there. It’s still early ... I’m pretty sure I’ll have to make adjustments as the season goes on.”

Thrust into the starting lineup on Wednesday in place of Hayward, a slimmed-down Marcus Smart is another guy who will look to produce at a higher rate on both ends of the floor. Same goes for rotational guard Terry Rozier, who was already expected to have the largest role of his career heading into the year.

With Hayward on the floor, it wasn’t far fetched to believe the Celtics could seriously contend with the Cavaliers for an Eastern Conference championship. Without him, it’s on the aforementioned young guys -- along with new superstar Kyrie Irving, of course -- to attempt to fulfill those lofty expectations.

Many people have already written them off as an upper mid-tier playoff squad, but it remains to be seen what this almost entirely new roster is capable of -- with, or without Hayward.

“I’m not sure,” Horford said when asked if he believes the Celtics still have an equal shot at winning the East. “The thing for us is to really take it game by game, try to grow. You can’t replace a guy like Gordon and we had a lot of high expectations for him. (But) we just have to try to look at it game by game and not get caught up in the end result.”