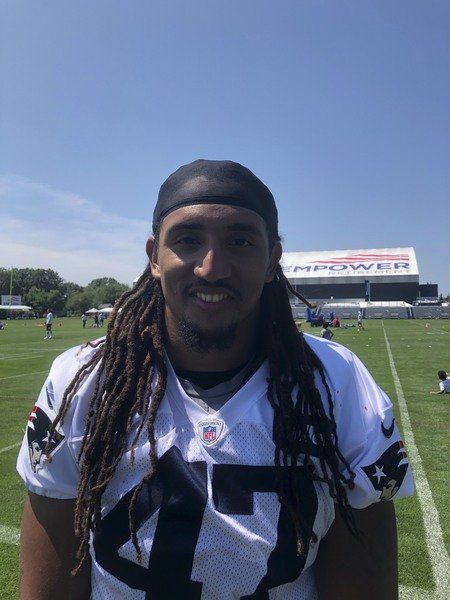 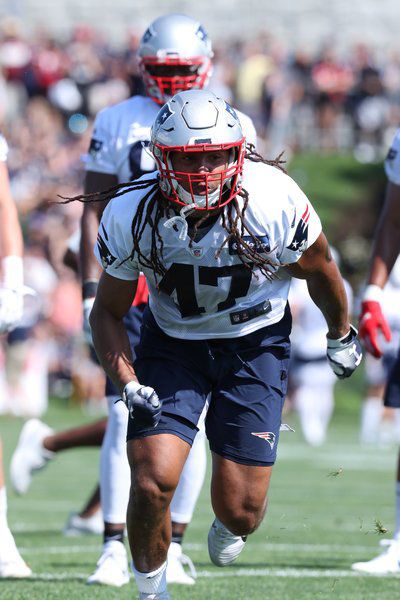 Courtesy of the New England Patriots/David SilvermanPatriots fullback Jakob Johnson thought his football dream was over. Now the German native has a chance to play with the defending Super Bowl champions after being selected as part of the NFL’s International Player Pathway Program.

Courtesy of the New England Patriots/David SilvermanPatriots fullback Jakob Johnson thought his football dream was over. Now the German native has a chance to play with the defending Super Bowl champions after being selected as part of the NFL’s International Player Pathway Program.

When summer practices are over, New England Patriots players typically take a few moments to unwind before heading in for their afternoon lift. Some will chat up coaches or friends visiting for the day, others might play with their kids on the field.

Then there is Jakob Johnson.

He is among a handful of players still sweating in the back part of the practice complex.

The 6-foot-3, 255-pound fullback from Germany, who joined the Patriots in April as part of the International Player Pathway Program, knows how rare an opportunity like this is. Last year, when he went undrafted and unsigned out of the University of Tennessee, he returned to Germany thinking his dream of playing football in America was over. Now, the 24-year-old Johnson is at training camp with the defending Super Bowl champions and he’s determined to make the most of this chance.

A passion for the game

Growing up in Stuttgart, Germany, Johnson was an energetic kid. He joked that he always used to get in trouble at school for wrestling with his friends, so his mother tried to get him involved in as many sports as possible to give him an outlet for that energy.

“I did soccer, basketball, wrestling, everything, a lot of them at the same time, but they never really powered me out,” Johnson said. “So my mom found an article in the newspaper about a local football team, put me in there and I came back from practice and she said it was the first time I just ate my food, shut up and went to bed. So she was happy and I just stuck with it.”

Johnson quickly took to the new sport, and before long he became a fixture with the Stuttgart Scorpions U-19 team. With the encouragement of his coaches, he and a handful of teammates decided they wanted to really give the sport a shot.

“If you play football in Germany, it’s not for the money or the fame, it’s really just because you’re passionate about the sport,” Johnson said. “In Germany it’s not as common for people to be really into their sport, so teachers don’t have a lot of understanding for it. Your classmates, you come in late because you went to the gym in the morning before school and they’ll look at you funny. But we stuck together as a group and got better.”

A turning point for Johnson came when an American player on the club’s top team told him he might be good enough to play in the states. Hearing that, Johnson began exploring the possibility of proving himself against American competition to hopefully earn a chance to play college football. That effort ultimately took him to Jacksonville, Florida, where he had some family and was able to enroll at Jean Ribault High School.

One high school season was all college recruiters needed to see. Johnson earned multiple Division 1 offers and eventually wound up at Tennessee. He spent four seasons with the Volunteers, first as a linebacker and then as a tight end, but after graduating in the spring of 2018.

By all accounts, his American football journey looked like it was over. Johnson returned to Stuttgart and rejoined his old Scorpions club, and as far as he knew, that’s where he would likely play out the rest of his career.

But then, one more opportunity unexpectedly presented itself.

Established in 2017, the NFL’s International Player Pathway Program aims to help give elite international athletes an opportunity to transition to professional football outside of the typical high school to college pipeline.

“They have a group of scouts out of England, the NFL UK office who are scouting any league around the world. And not only football, but also rugby, anything,” Johnson said. “They’re looking for guys everywhere, and they’ll fly out to see them and work them out, get their basic information, measurables, their 40 times, that kind of stuff.”

Johnson got on the international scouts’ radar, and a short time later he was one of seven players selected to try out for the program. The next three months were a whirlwind, as he trained with the other prospects at IMG Academy in Florida before taking part in the program’s Pro Day on April 1. It was an exciting, stressful time, knowing that if he succeeded, he would have a chance to join an NFL roster.

To his delight, he was one of the four players chosen. Then, to his even greater delight, he learned he would be assigned to the defending Super Bowl champion New England Patriots.

What a difference a few months makes.

Johnson reported to New England to take part in the team’s offseason program within days of his selection, and now he and the other International Player Pathway Program prospects, who were assigned to the other three AFC East clubs, will spend the rest of the preseason training with their new clubs. Once training camp is over, they will be eligible for an international player practice squad exemption, which will give their team an 11th practice squad member who is ineligible to be activated during the 2019 season.

Because of that exemption, and because Johnson is competing for the lone fullback spot against veteran James Develin, his chances of making the 53-man roster are slim. But regardless of what role he plays, Johnson is thrilled to have an opportunity to live out his dream of playing professional football in the NFL.

“It’s amazing, man,” Johnson said. “Especially for me because I was in a position where I thought football was over for me. A year ago I was back in Germany playing for my old team over there, so I thought my football journey was pretty much over. To get this opportunity to be here and to work with these guys and try to get better every day, it’s amazing.”