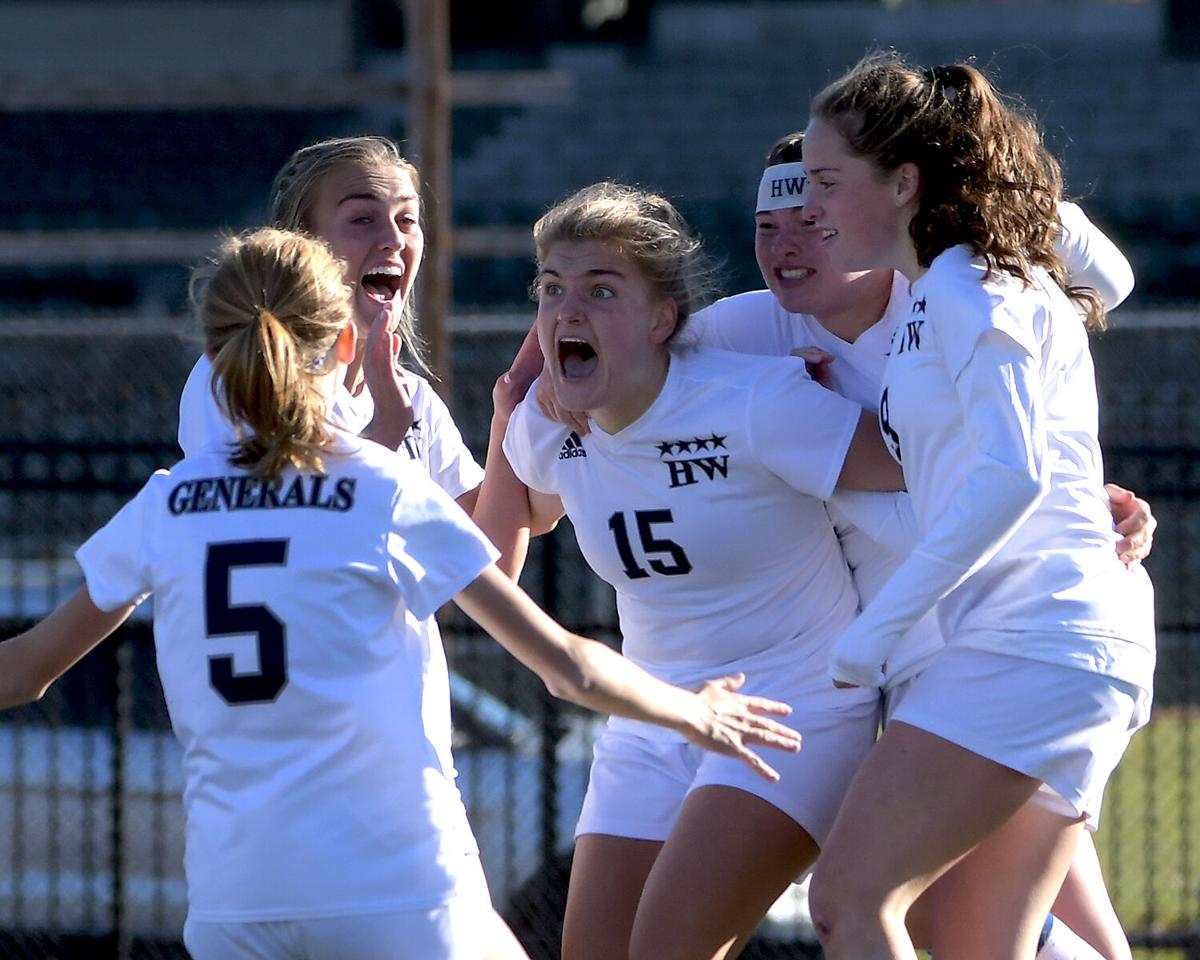 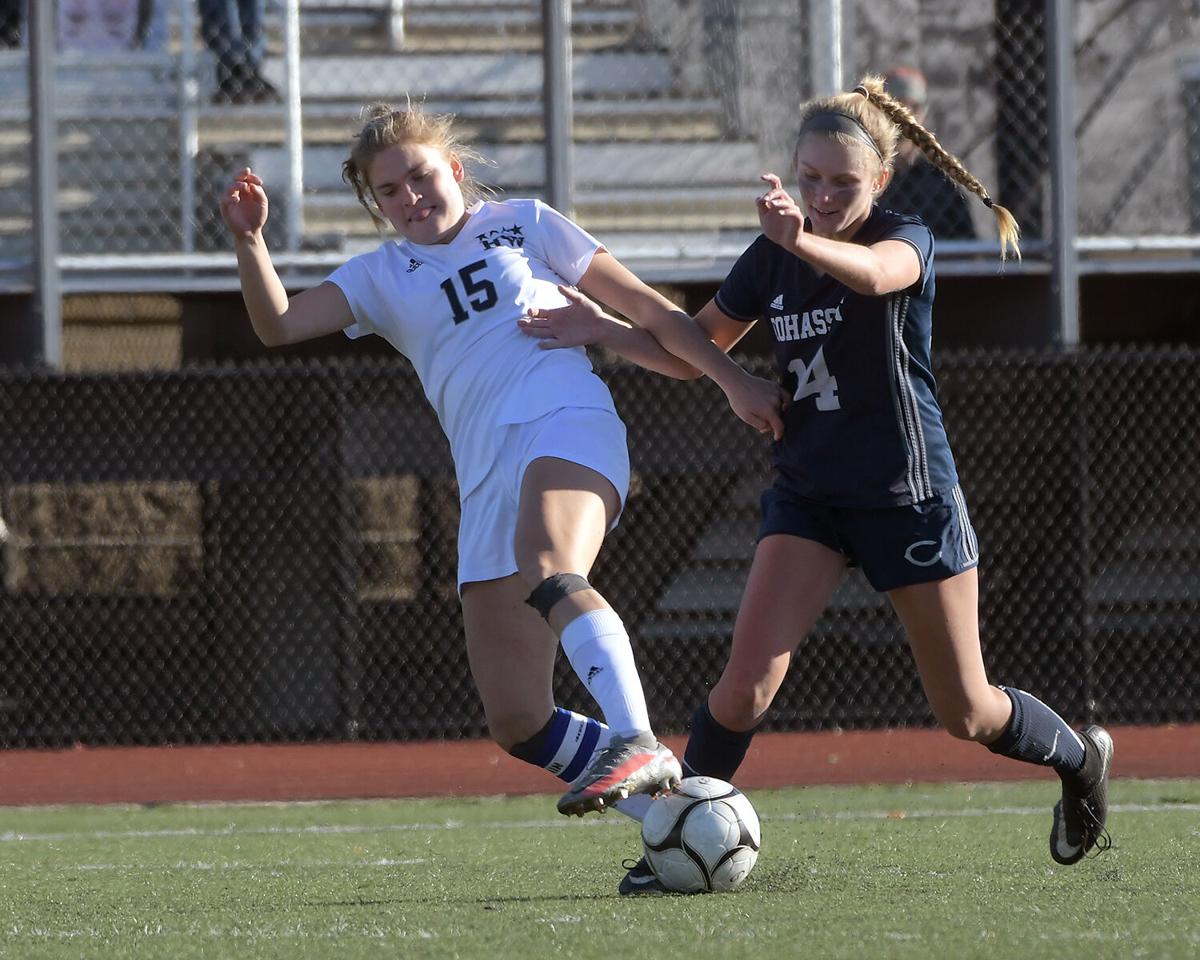 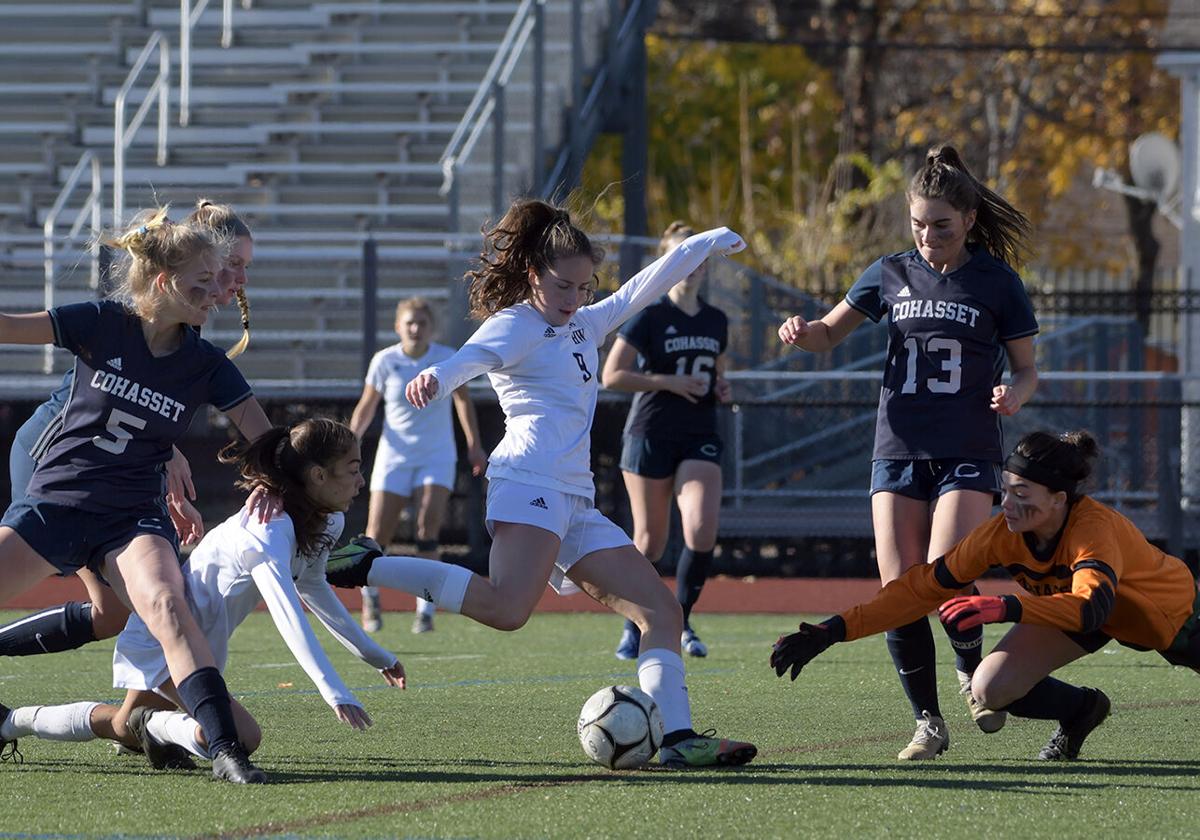 Hamilton-Wenham’s Jane Maguire lines up a boot at the goal in Saturday’s state championship win. 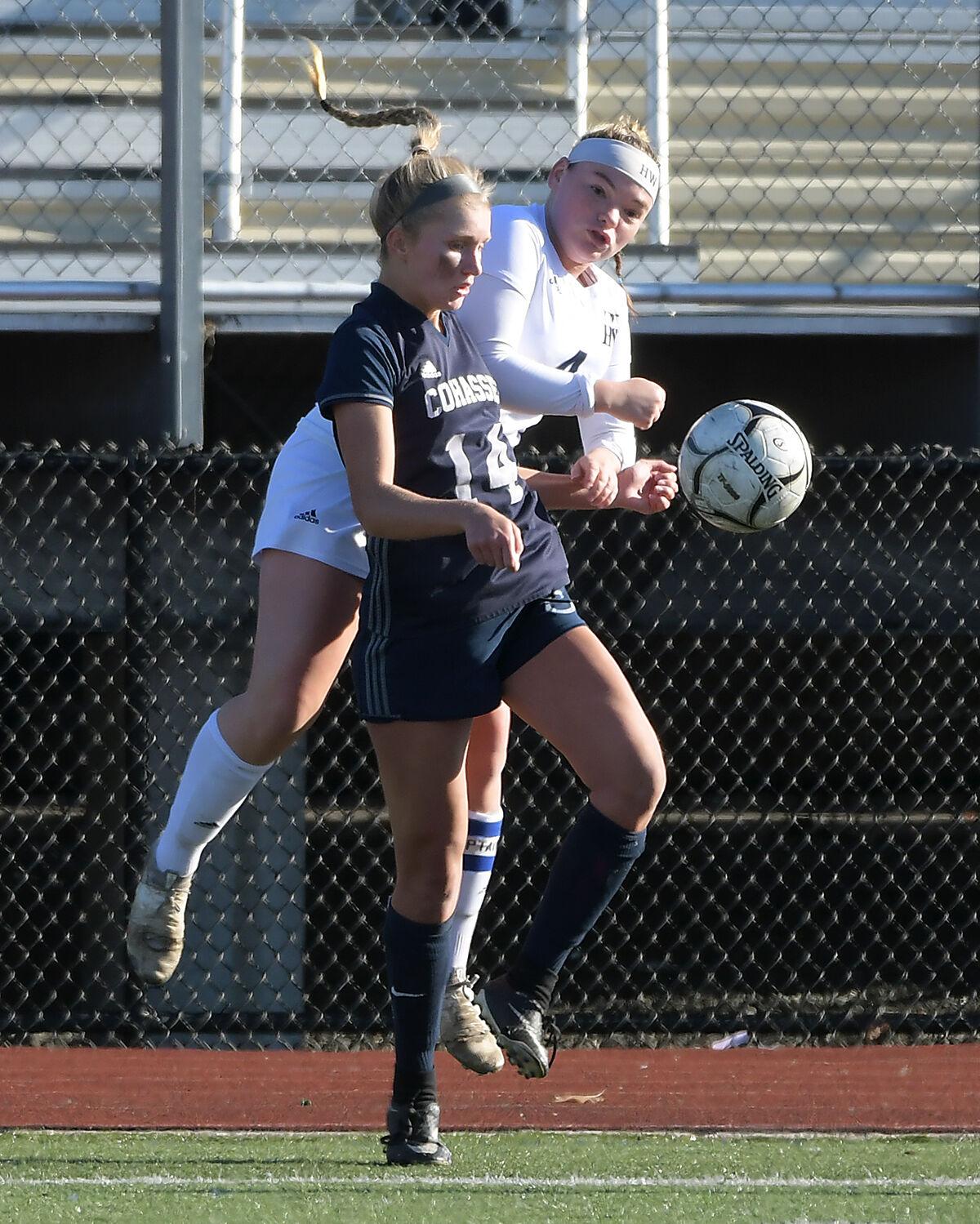 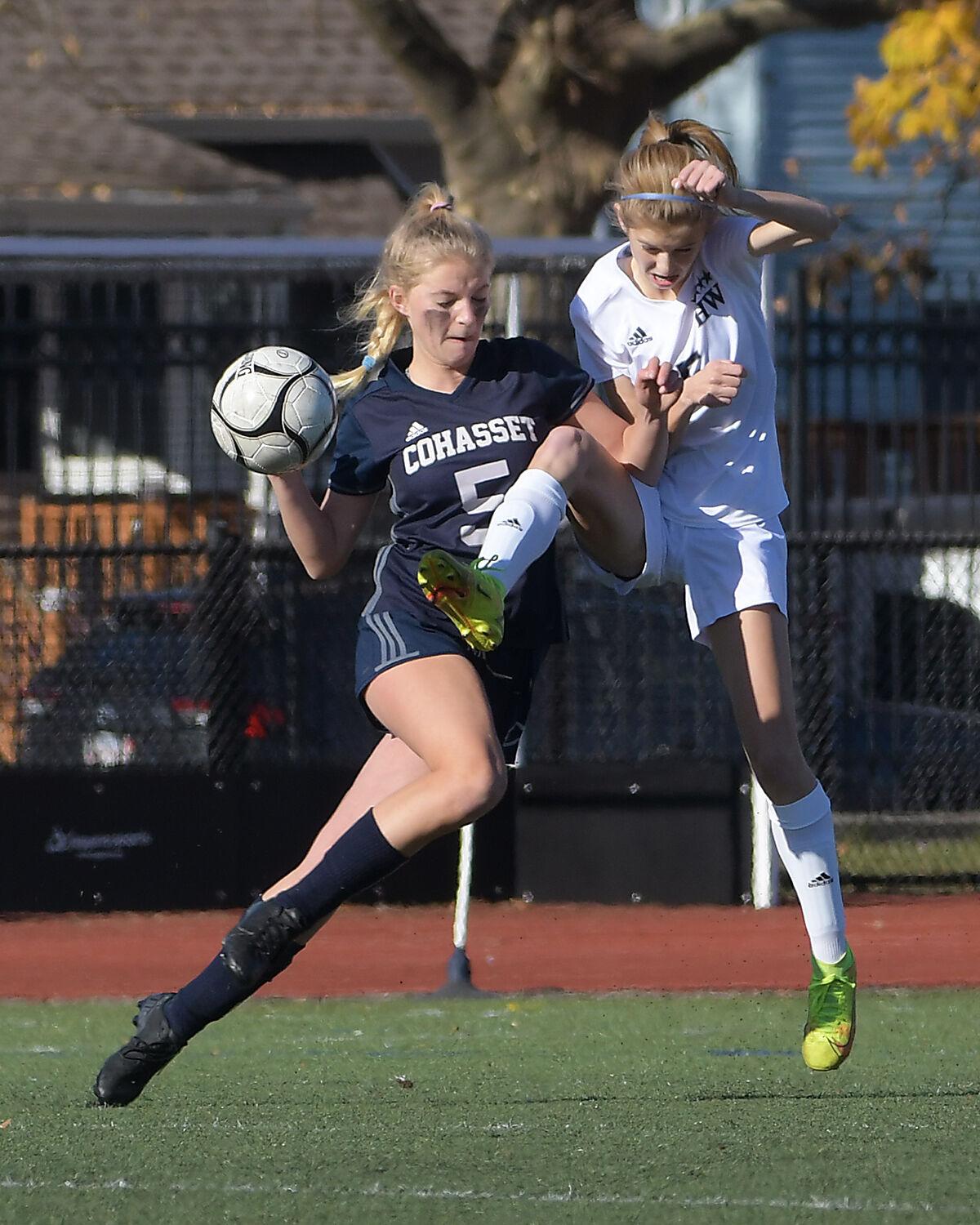 Hamilton-Wenham's Chloe Gern, right, tries to boot it away from a Cohasset player in Saturday's state final. Rose Raymond photo 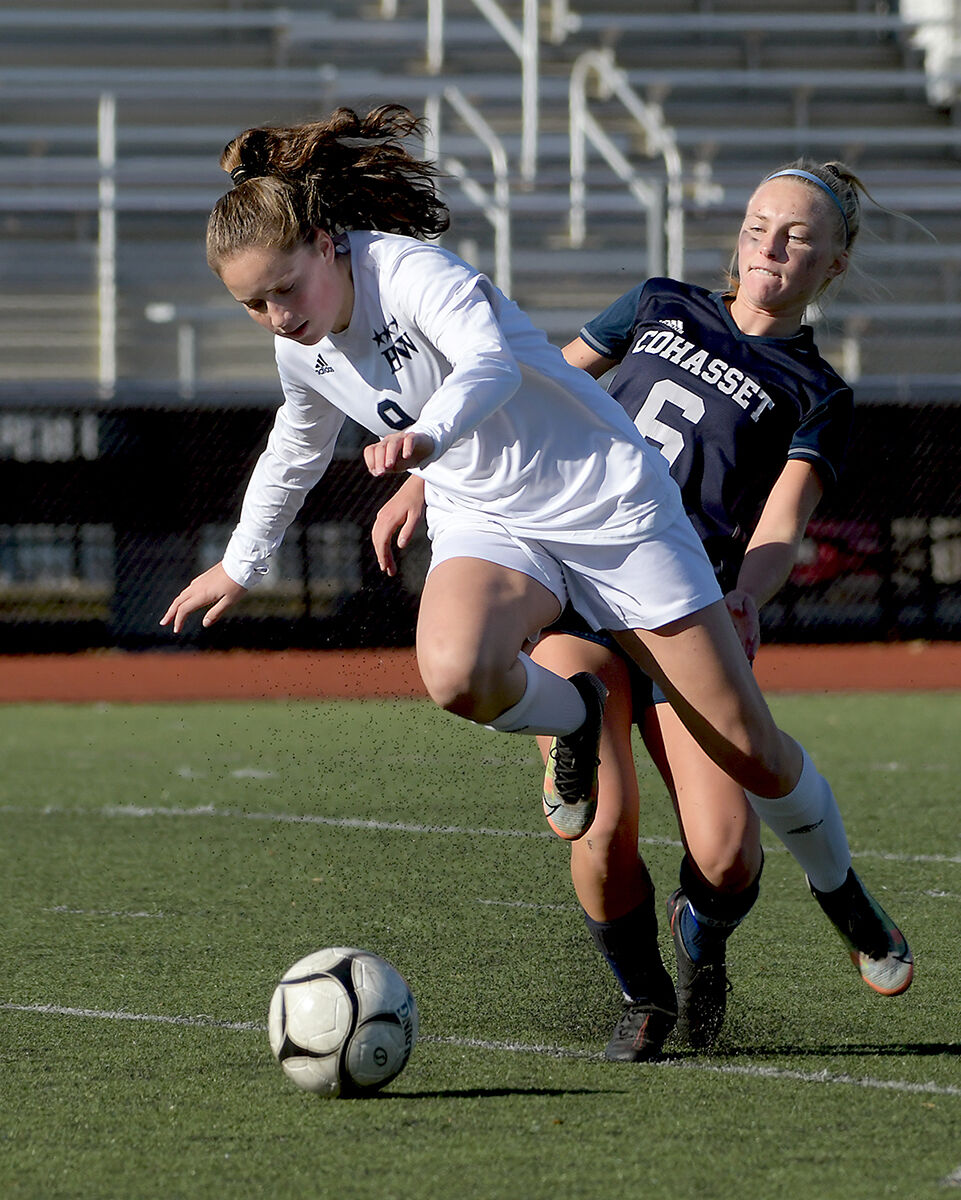 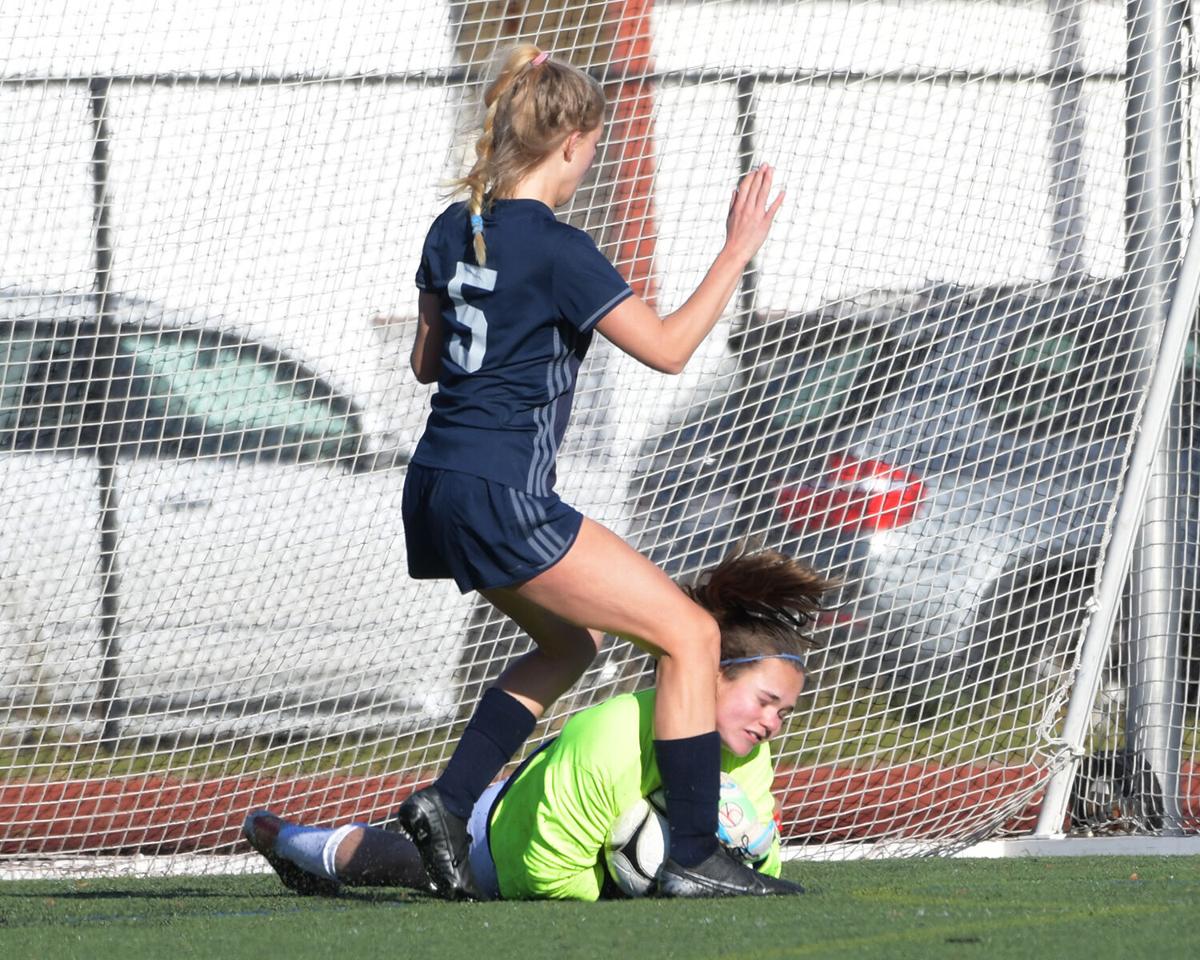 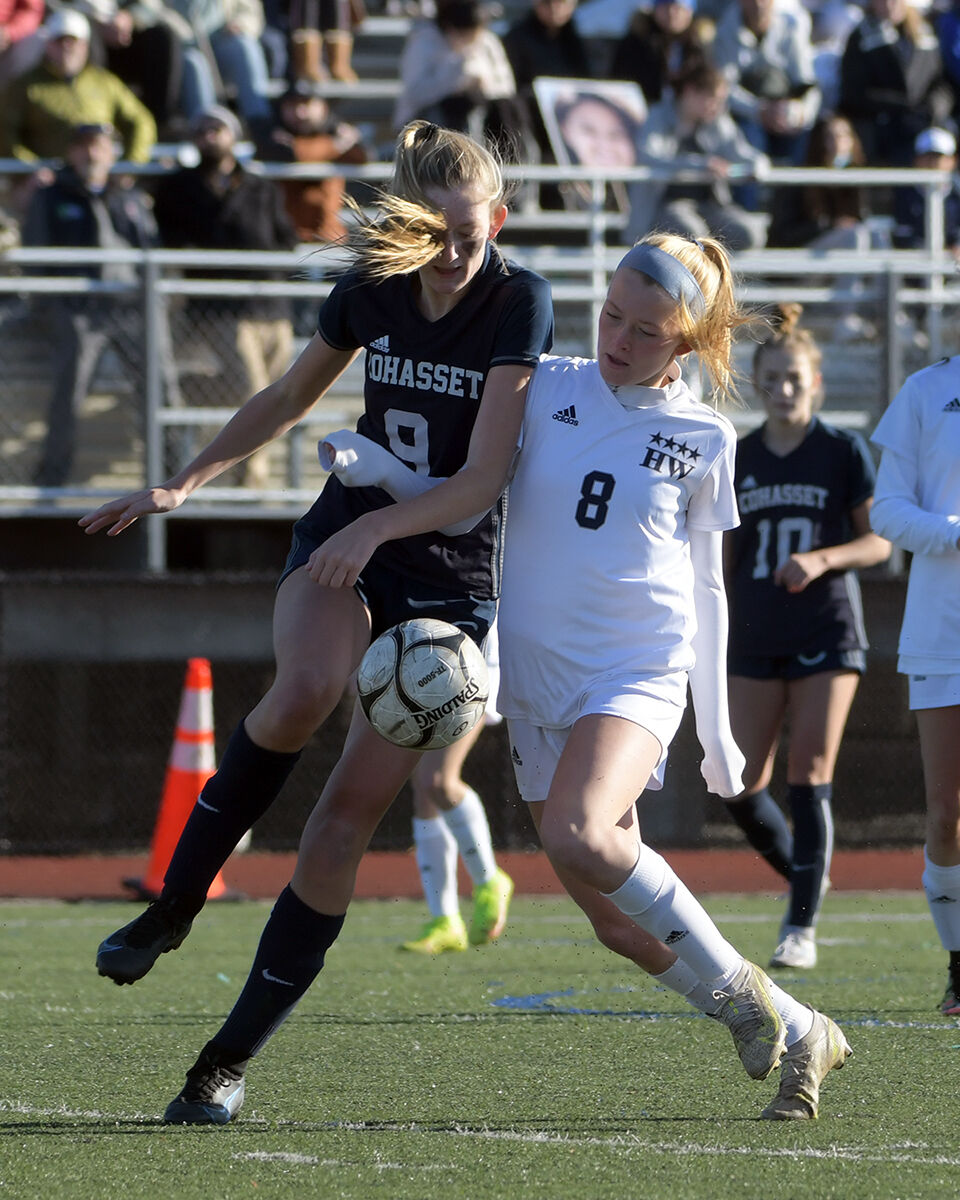 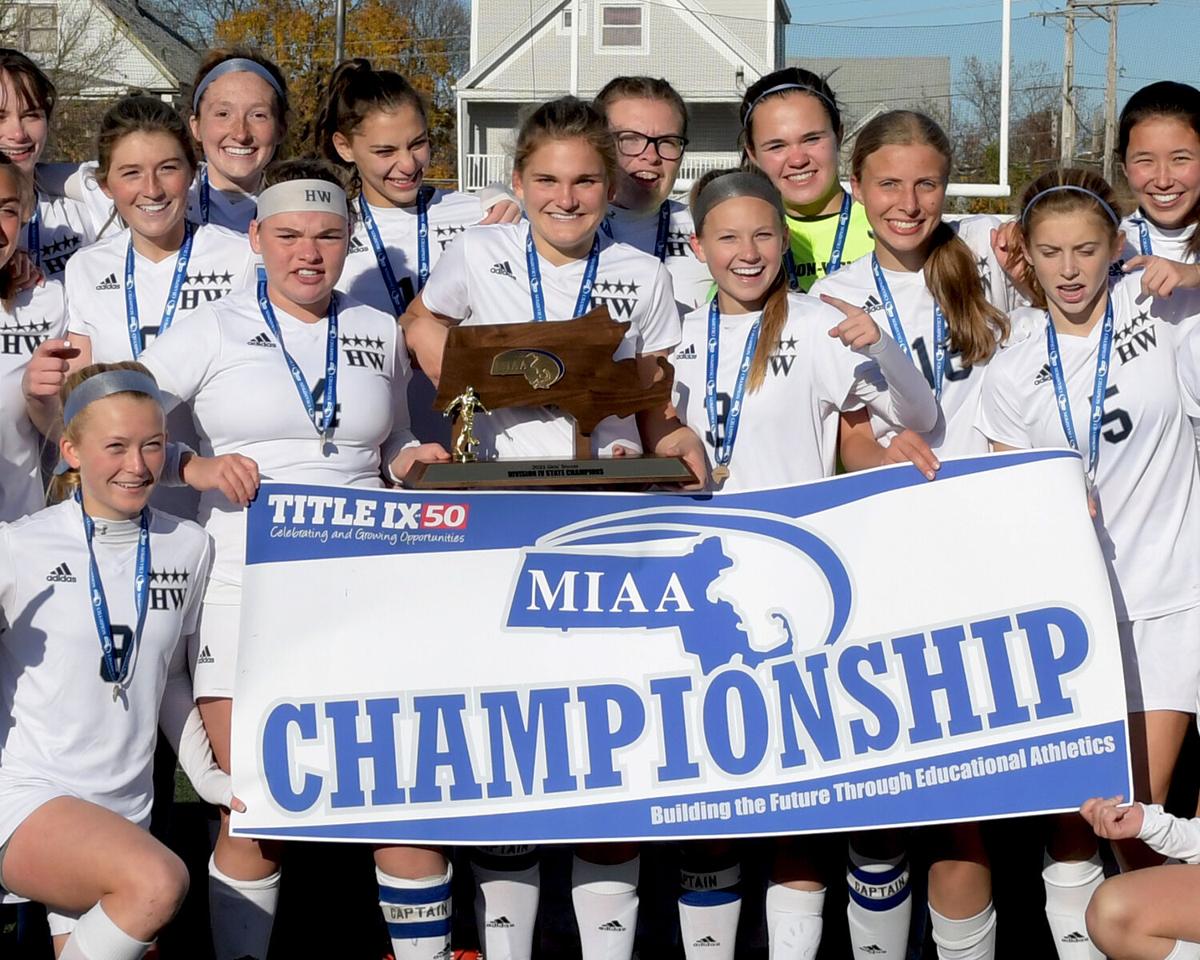 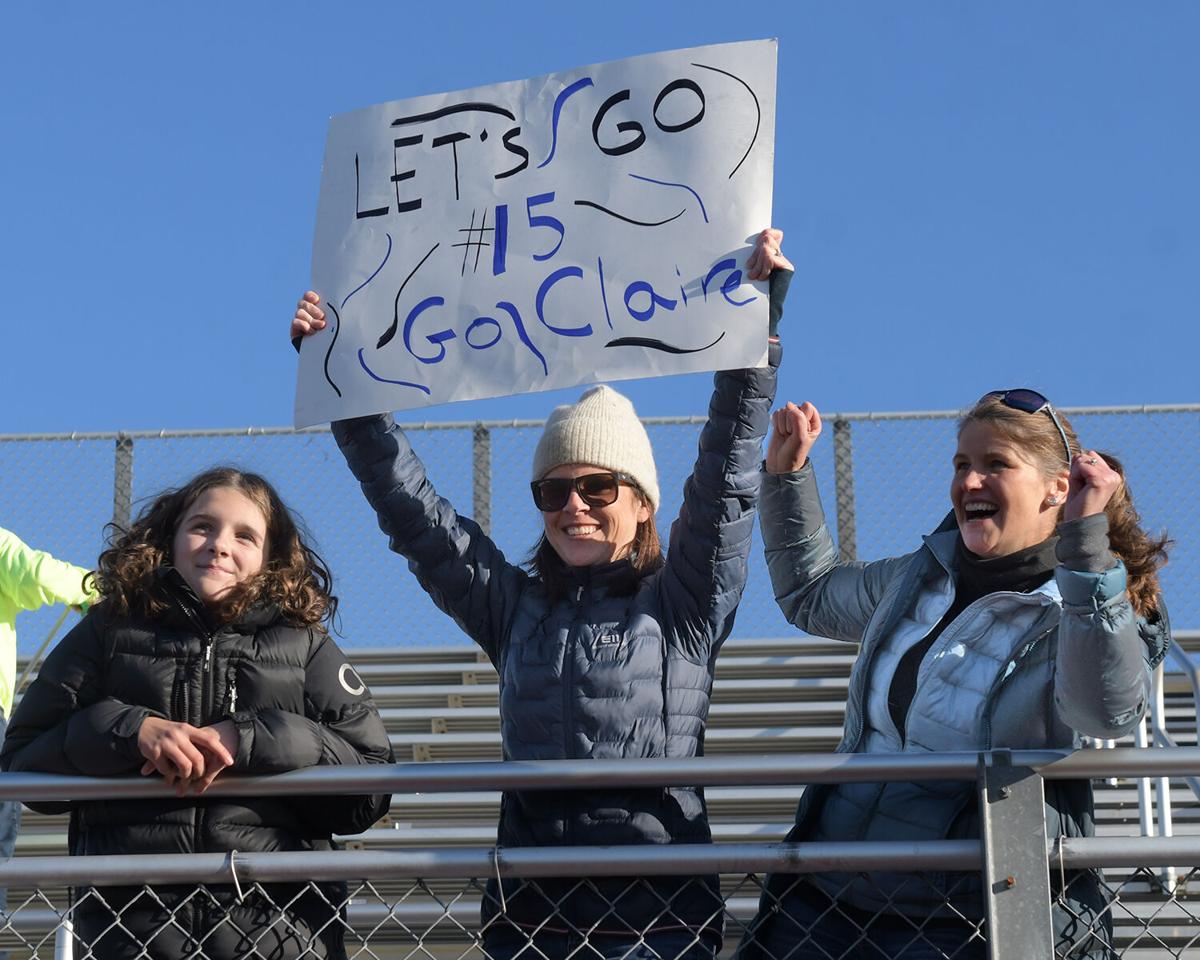 Claire Nistl's mom holds up a sign for her daughter from the stands in Saturday's state final. Rose Raymond photo

Hamilton-Wenham’s Jane Maguire lines up a boot at the goal in Saturday’s state championship win.

Hamilton-Wenham's Chloe Gern, right, tries to boot it away from a Cohasset player in Saturday's state final. Rose Raymond photo

Claire Nistl's mom holds up a sign for her daughter from the stands in Saturday's state final. Rose Raymond photo

LYNN — It all happened so fast that Hamilton-Wenham captain Claire Nistl didn’t even have time to process it.

Taking on top-seeded Cohasset in the Division 4 girls soccer state championship game at Lynn’s Manning Field, Nistl and her Generals were locked in a tie and headed for overtime. Less than two minutes into the extra frame, Nistl found herself alone on a fast break with three Skipper defenders giving chase.

Like she’s done all season — and in the state tournament in particular — the senior standout committed to her move, dribbled around the defense and launched a shot towards the Cohasset goal.

The decisive strike found the back of the net and sent Hamilton-Wenham home with a 2-1 victory and their first state title in program history.

“I saw a couple of players in front of me but I just dribbled through and was hoping it would work,” recalled Nistl. “Once I saw the ball hit the back of the net I almost lost my breath; I thought it was a dream. I didn’t think this would ever happen.

“But the entire team persevered,” she added. “Cohasset was a really great team and we couldn’t have done this without all our coaches, fans and support we had the whole season.”

While Nistl’s game-winner certainly didn’t surprise anyone that’s watched the Generals compete this fall — she finished with 21 goals on the season — it was somewhat of a shocking ending considering the way the game played out down the stretch.

Hamilton had taken a 1-0 lead early in action off the foot of — you guessed it — Nistl, and held that advantage until stoppage time of the second half. That’s when Cohasset finally drew even, as freshman Tess Barrett punched one home from inside the box to seemingly swing all the momentum in their favor.

But the Generals remained calm, poised and determined, ultimately nullifying that equalizer with the incredible finish early in overtime.

“The momentum was totally going Cohasset’s way and I just said to them, ‘It’s not over and you’ve worked really hard for this. You have to keep fighting, weather the storm and just keep pushing and give everything you got,’” said Generals head coach Nancy Waddell. “There’s nothing left, there’s nothing tomorrow so keep working for it. and they did.”

Nistl was obviously the difference maker in the win, but she certainly couldn’t have done it without the help from her teammates.

Hamilton’s defense in particular was incredibly stout, thwarting away chance after chance for a dangerous Cohasset team that had scored at least three goals in every game this postseason. Fellow captain and All-State defender Jackie Chapdelaine was her usual brick wall self in the back. Nora Gamber, Libby Collins (another captain), Chloe Gern and Maddy Wood both marked their opponents like a blanket, and keeper Stewart Bernard provided reliable insurance between the posts.

“We’ve had an incredible defense the last two years,” said Nistl. “They definitely haven’t been tested to their full abilities until today, and I think they held them off the board for almost 76 minutes so I’m very proud of them. I’m so impressed; I know all of them were tirelessly working minute after minute and we couldn’t have done it without the defense the entire game.”

Overall, it was an up and down game with very few serious chances at goal throughout. Neither team gave an inch defensively, and much of the play was carried out near midfield with the two sides battling for possession and space.

Jane Maguire and Kara O’Shea (another captain) both turned in stellar games on both sides of the ball while countless others made the most of their minutes throughout in what was a ridiculously evenly matched, competitive finals bout.

The Generals, who went unbeaten in their last 18 games and finished 18-1-2, felt like this was a long time coming. They came into the season with state championship on their minds, and pushed each other all season long to reach that goal.

“Last year we got a lot of momentum going even with a shortened COVID season,” explained Nistl. “We did lose a couple of good seniors but we had a lot of young talent and Jane (Maguire) came back last year to help us so it was really helpful to have her talent on the field.

“Right when June hit we were practicing all summer and then August 22nd hit and our coaches put this goal in our minds. This was actually our 90th day since the season started and we were just like, ‘Let’s make these past 90 days worth it’, and we did that by winning this game. I’m really grateful.”

Hamilton-Wenham finished the game with five shots on goal compared to nine for Cohasset (16-3-2). The Generals had four corner kicks while Cohasset had three. It wasn’t the most beautiful display of soccer by either side, but it was a visibly hard fought tilt between two talented programs that wanted nothing more than to come out on top.

“There was nothing pretty about that game, that was not a pretty game of soccer by any means,” admitted Waddell. “This is just an amazing group of girls and you get to this point and you just want them to have it all because if you walk off this field today without that trophy, you forget how amazing your season was. I hope Cohasset remembers that because they were obviously an amazing team.

“I just wanted it so badly for this group of girls; they’ve worked hard and made sacrifices for each other all year.”