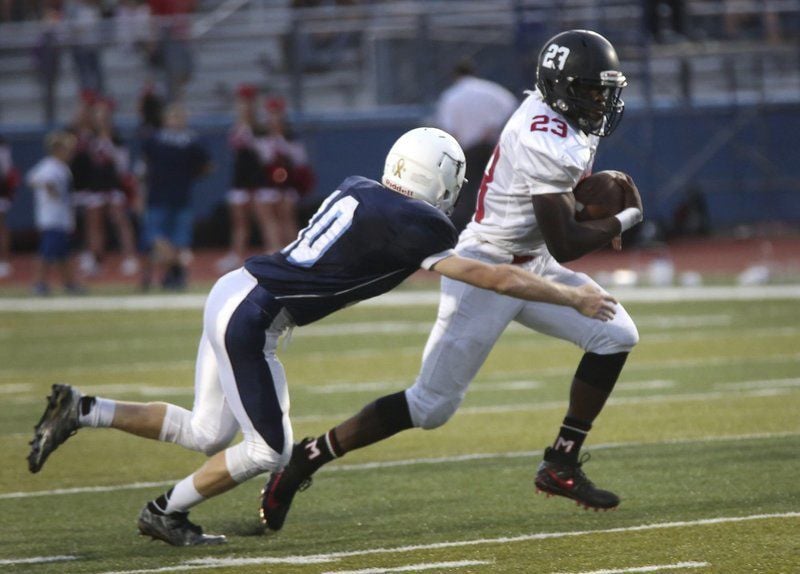 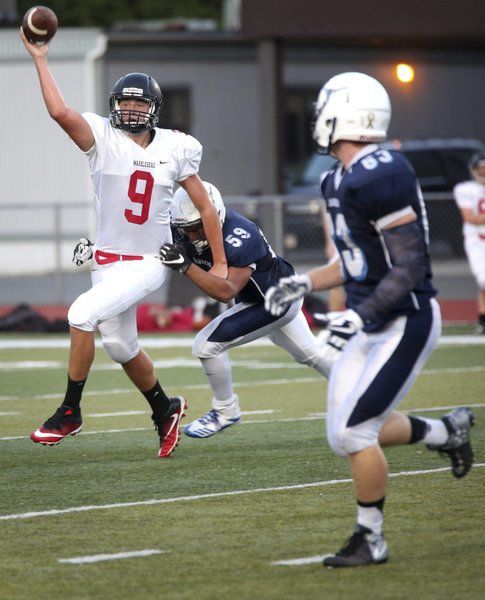 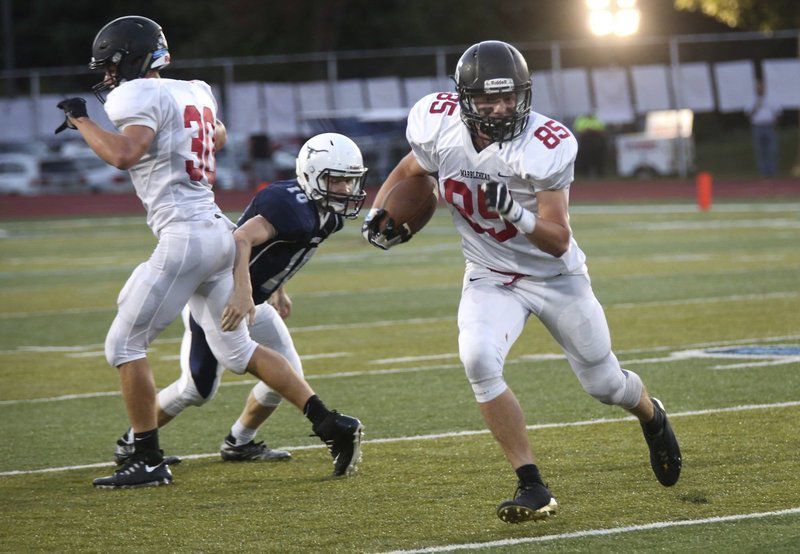 HADLEY GREEN/Staff photo Marblehead's Derek Marino (85) had 162 receiving yards all in the first half to help lift Marblehead over Peabody, 21-7. 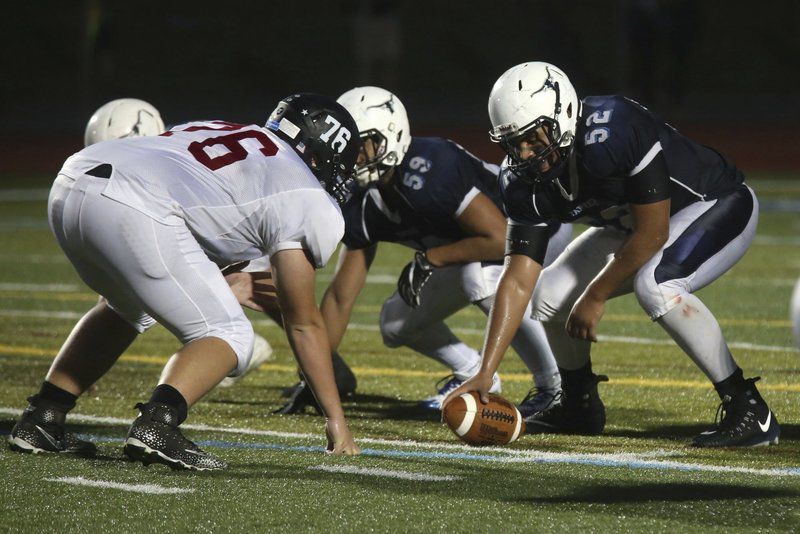 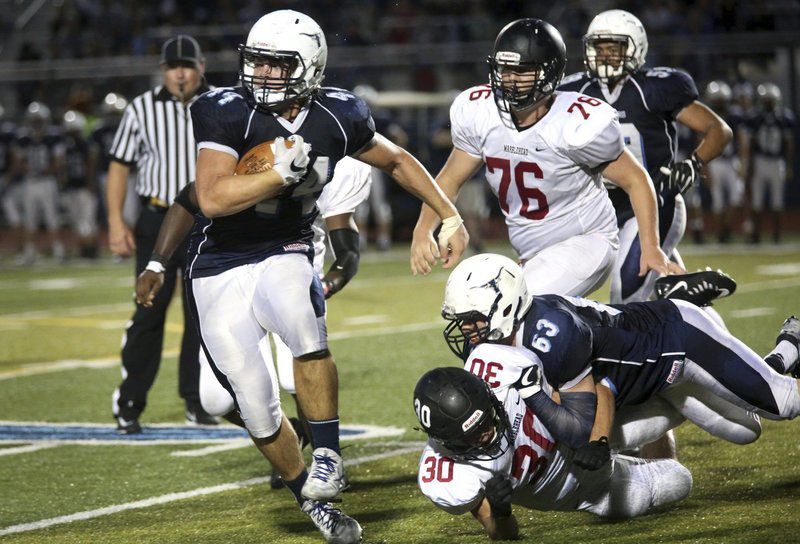 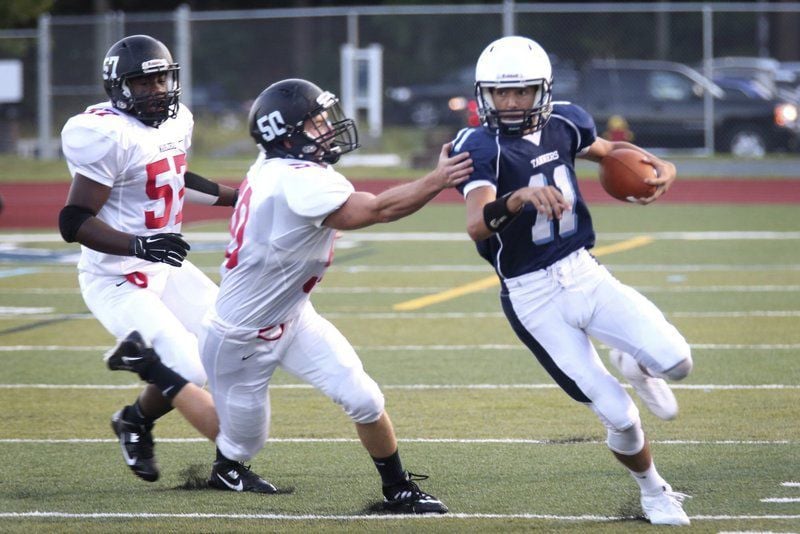 HADLEY GREEN/Staff photo Peabody's Colby Therrien (11) runs with the ball while Marblehead's Nick Corsini (50) tries to slow him down. 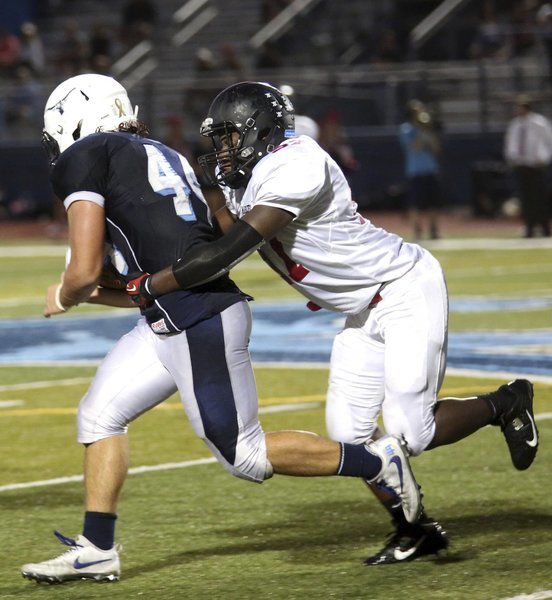 HADLEY GREEN/Staff photo Marblehead's Derek Marino (85) had 162 receiving yards all in the first half to help lift Marblehead over Peabody, 21-7.

HADLEY GREEN/Staff photo Peabody's Colby Therrien (11) runs with the ball while Marblehead's Nick Corsini (50) tries to slow him down.

PEABODY -- Chad Johnson, the man who made Ocho Cinco famous while playing receiver for the Bengals and the Patriots, would've felt right at home at Coley Lee Field on Saturday night.

Because try as they might, host Peabody High could not cover 85.

Marblehead's Derek Marino wore the red 85 on his white jersey on this night, but it might as well have been a giant bullseye for Magician QB Dewey Millett. The pair combined for 162 yards and two scores in the first half and Peabody's offensive woes continued as the Magicians remained unbeaten with a 21-7 win.

At 6-foot-2 and with track speed, Marino was a physical mismatch. He ran behind the defense for a 66-yard touchdown on the first drive, then used his height to snare a 16-yard score on a fourth down play as unbeaten Marblehead (3-0) raced out to a 14-0 lead.

Millett, who threw for 202 yards, was making his second start at QB after converting from tight end due to injuries. He stood tall in the pocket all night, outlasting a fierce Peabody (0-3) pass rush to deliver the deep ball to Marino.

"Dewey's got a great arm and he does a good job reading defenses, too," said Marino, who caught six of Millett's 10 completions. "We're getting used to each other and he knows that if he gets in trouble, he can throw it to me and I'll go get it."

Peabody, winless through three weeks for the first time in five years, played inspired defense. The hosts got two sacks from Eric DeMayo, an interception and a sack from Chris Glass and sacks by Michael Look, Aba Kaba and Cam Powers. They frequently put Marblehead in unfavorable downs-and-distances, only to see Marino break them with a big play.

"We knew he was a matchup problem and Marblehead did a good job putting him in spots where we had to have different guys covering him," said Peabody coach Mark Bettencourt. "85 had a great game, and give their QB credit because he threw it where only their kid could catch it."

The Magicians had just nine rushing yards at halftime, though they led 21-0 when Devin Romain (55 rushing yards) scored from nine yards out after Peabody mishandled a punt in their own territory. Despite the great connection between Millett and Marino, Marblehead coach Jim Rudloff wanted more balance from his offense.

"We're using maybe 20 percent of our playbook right now. We've always thrived off teams not knowing what we're going to do and right now the whole book on Marblehead is 'watch out for 85.' Derek's extremely talented and he's going to have a great year, but we have to be able to do more because sooner or later someone will figure out how to take that away," Rudloff said.

Peabody tried seven ball carriers and briefly went to the spread offense in the first half to try to get going. They had some success with power runs in the second half, going on a 15-play drive that turned it over on downs and then finally scoring on sophomore Colby Therrien's 1-yard sneak with 43 second left.

It was the Tanners first points since the first drive of their first game, a span of nearly 11 quarters and 127:12 of game action. DeMayo threw a pitch pass to Elijah White (60 all-purpose yards) to set up the score.

"We have to find something that can work offensively," said Bettencourt, whose club is at fellow winless Revere Thursday. "We couldn't trap, we couldn't pull and we were getting blown off the ball. Marblehead's defensive line won the surge and moved the line of scrimmage backwards. That can't happen if we're going to be successful."

Marblehead's linebackers, Tyrse Hardy and Teddy Mayle, ate up the Peabody run game in the first half as the visitors held a staggering 187-38 yardage edge. By the end, the margin was a more respectable 245-165 but Magician defenders like Nick Corsini, Obinna Okerake, Nick Carnes, Jack McGrath (interception) and Tommy Cronin more than left their mark.

"We've been without (captain) Aidan Gillis and kids that have stepped in have been terrific. I can't say enough about what they've done," said Rudloff, whose defense has allowed two touchdowns in three weeks.

"You know, 21 points won't do it against a team that just scored 53," Rudloff said. "Our offense is operating like a bicycle with a broken chain and a flat tire right now and we have to do something about it."