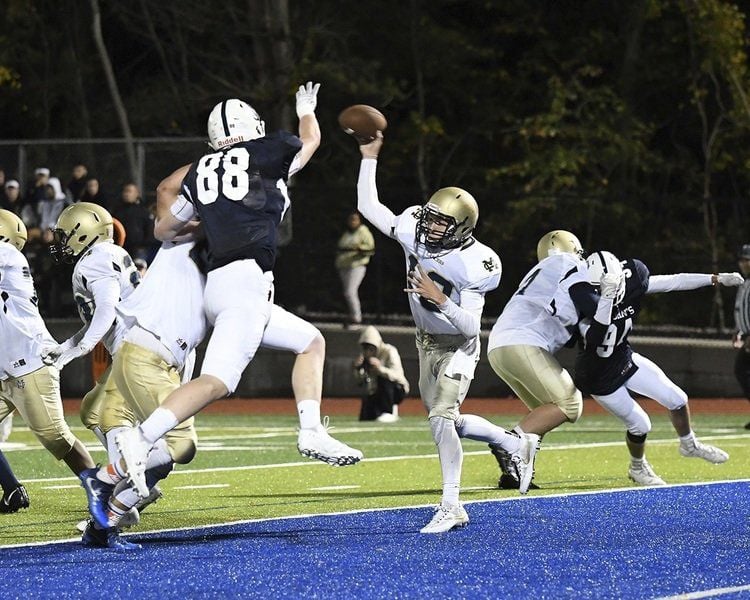 Alex Lane (88) leaps at the line in an attempt to block a pass attempt against Malden Catholic on Saturday night.  Rose Raymond photos 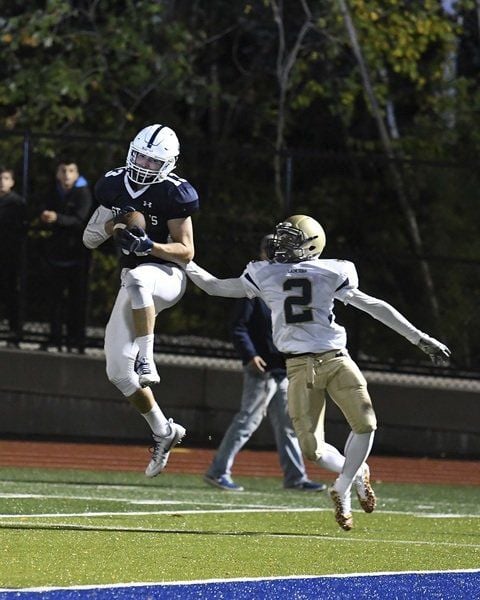 Rose Raymond photosSt. John’s Prep junior Max Freedman hauls in one of his big catches during the Eagles’ shut out win over Malden Catholic this weekend. 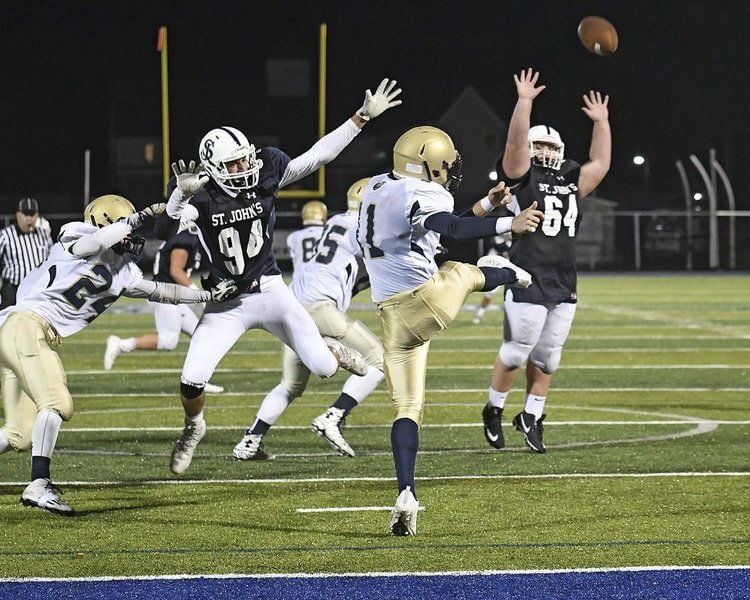 St. John's Prep lineman Patrick Sweetnam (94) and James Taylor (64) throw their hands up in an attempt to block a Malden Catholic punt on Saturday night in Danvers.  Rose Raymond photos 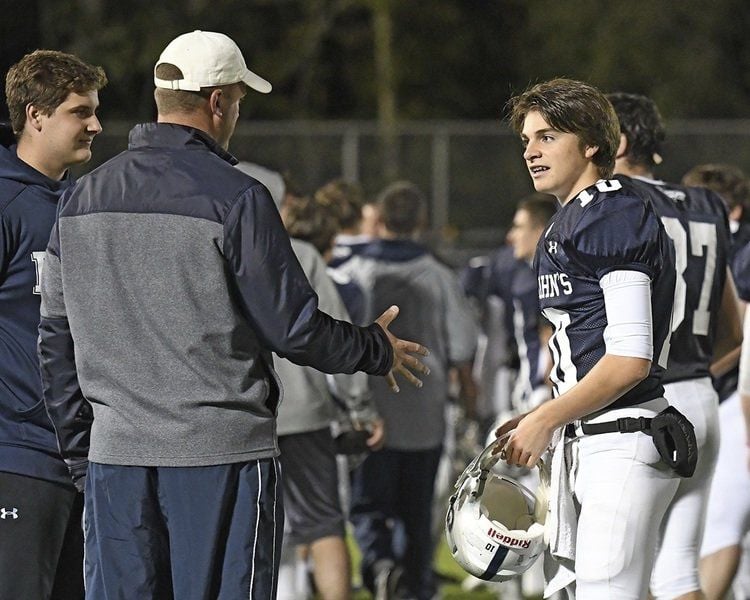 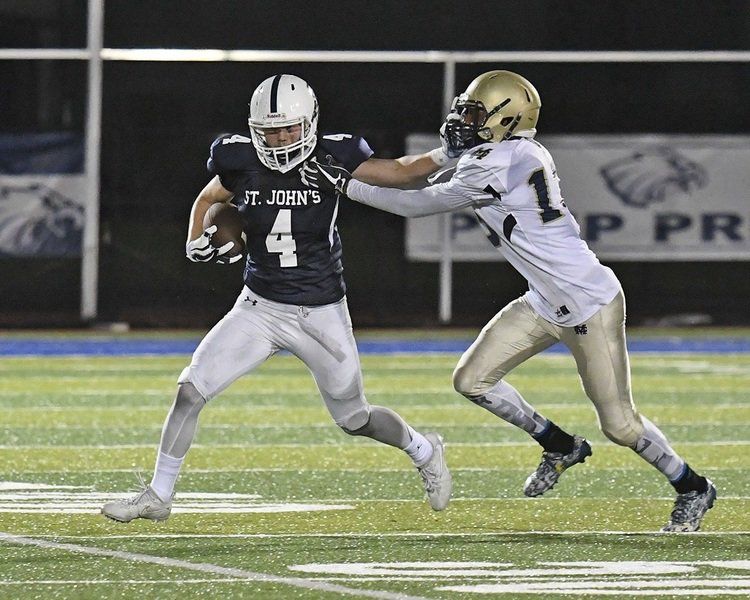 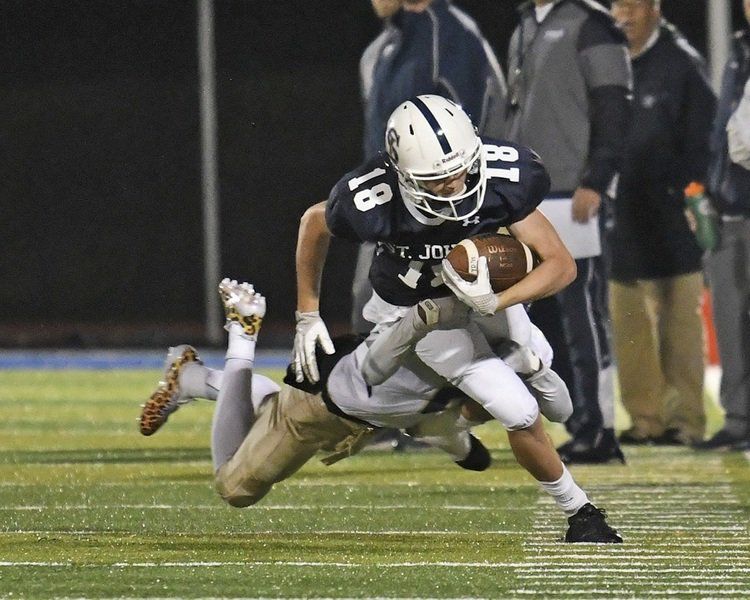 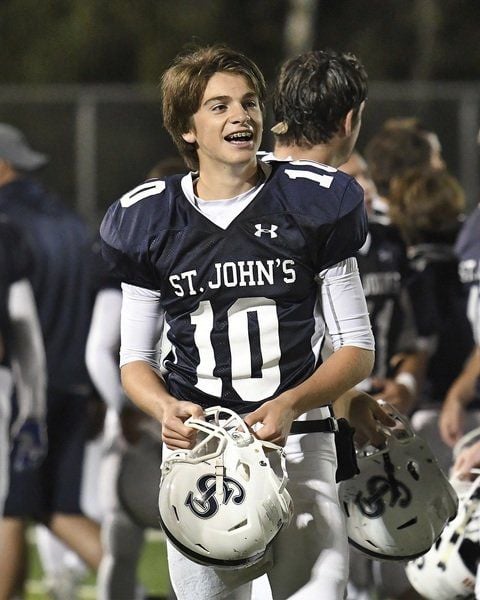 Alex Lane (88) leaps at the line in an attempt to block a pass attempt against Malden Catholic on Saturday night.  Rose Raymond photos

Rose Raymond photosSt. John’s Prep junior Max Freedman hauls in one of his big catches during the Eagles’ shut out win over Malden Catholic this weekend.

St. John's Prep lineman Patrick Sweetnam (94) and James Taylor (64) throw their hands up in an attempt to block a Malden Catholic punt on Saturday night in Danvers.  Rose Raymond photos

DANVERS — The St. John’s Prep football squad’s offense had a new look on Saturday night when they entertained Malden Catholic under the lights at Glatz Field.

The moves paid off with a 35-0 victory to even the Eagles’ record at 2-2. It was the first Catholic Conference game, and second shutout of the season for the Prep.

Sophomore Matt Crowley was at quarterback, and senior captain Mike Yarin moved to wide receiver. Crowley had taken over in the second half of the Everett game after Yarin was shaken up on a blind side hit.

“It was a coaches decision and both Mike and Matt were great about it,” said Eagles head coach Brian St. Pierre. “I felt it was the right time to make the move; it’s October now and we’re into the league portion of the schedule. Crowley is poised, talented, and we’re not going to hold back. Yarin gives us another weapon outside.”

Crowley responded to his first start by completing eight passes for 153 yards and a pair of touchdowns. Junior running back Aise Pream also had a big night with three touchdowns, two rushing and the other a 27-yard reception on a well thrown Crowley pass. He rushed for 115 yards with all but one coming in the first half, and also came up with an interception in the secondary.

The young offensive line keeps improving with each game and opened up some big holes for Pream and Trent Tully while the defense clamped down on everything MC attempted.

The Eagles opened up a 28-0 lead by halftime after a scoreless first quarter. It started with an eight play, 79-yard drive. Pream and Trent Tully ran the ball, and captain Mike Slattery had a 20-yard reception for a first down inside the red zone. Pream picked up 16 yards on the next play and then blasted in from two yards out. Brandon Robinson booted the first of his five PAT’s and SJP was off and running.

They put the game out of reach with three more touchdowns less than three minutes apart before halftime. The first came on a 74-yard drive, highlighted by two big catches by junior Max Freedman, who made a spectacular 29-yard grab and later caught a 32-yard TD pass in the left corner of the end zone.

“Max had struggled in the first couple of weeks, but he broke out tonight,” said St. Pierre. “He’s got talent, and that was good to see.”

The defense was outstanding all game, putting pressure on the Lancers in both run and pass situations. Junior quarterback Matt Jandresevits was sacked twice, including one by James Taylor for a big loss. Jandresevits fumbled to set up the third Prep score, and three plays later Pream raced 29-yard run to pay dirt. On the next series Crowley found Pream for another touchdown.

After the opening drive of the third quarter culminated with Tully’s 16-yard touchdown run, St. Pierre went to his bench and sophomore Robert Markus took over under center with a bevy of young backs carrying the ball.

“We were able to shuffle a lot of different players in,” said St. Pierre. “These kids all work hard in practice so it’s important to get them in whenever we can. Playing the type of schedule we do it’s sometimes hard to do, but my coaches do a great job making it happen.”

After two tough losses to Central Catholic and Everett it was certainly a satisfying win. But St. Pierre knows there are things to work on before going on the road to take on Catholic Memorial on Friday night.

The Knights are coming off a stunning upset of Xaverian. Costly penalties were concerning against the Lancers, who picked up all four first downs in the first half and two more in the final two quarters on Prep pass interference and personal foul penalties.

“It’s always chippy when we play Malden Catholic, but we were called for too many penalties,” said St. Pierre. “On one pass interference call the ref told me he might have made a mistake, but we took a couple of undisciplined penalties that hurt. We’ve got to do better in the next two games against very good teams in our league (CM and BC High).”