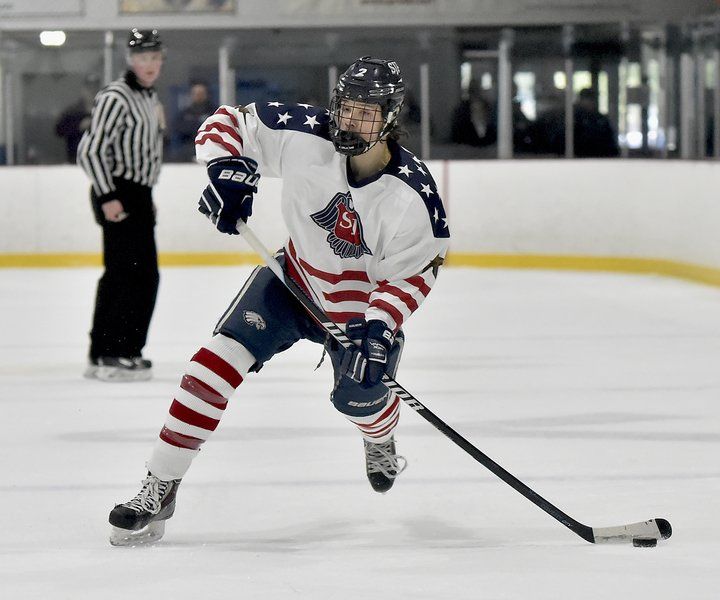 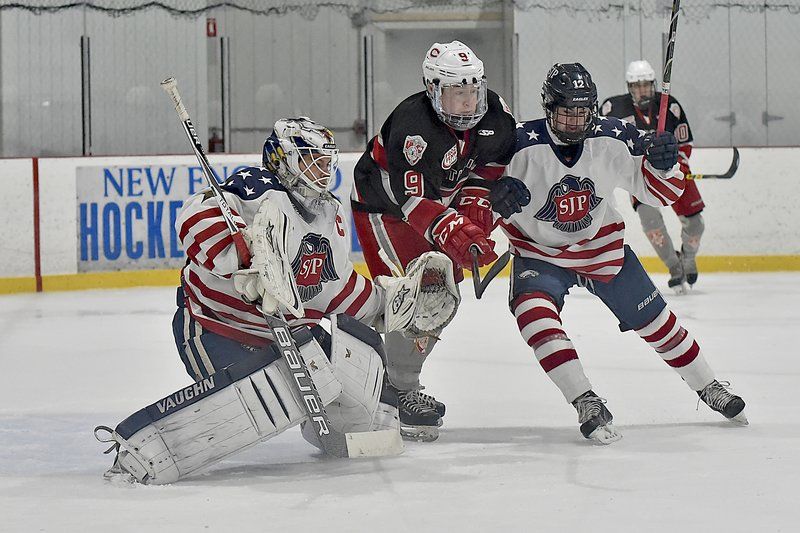 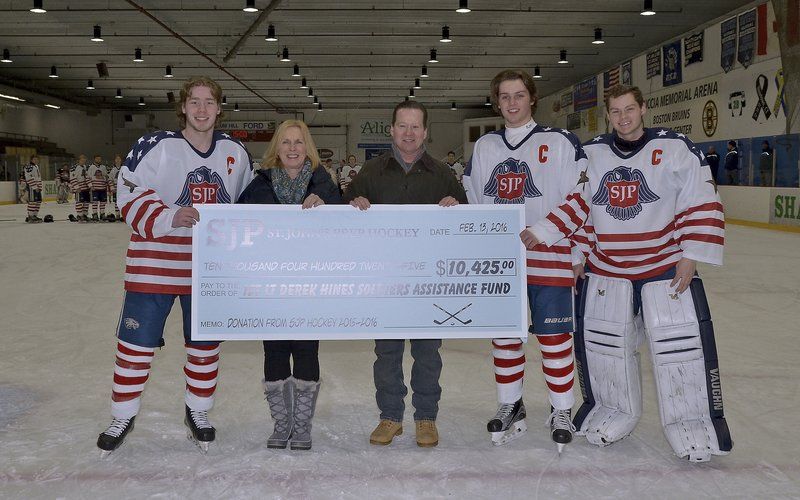 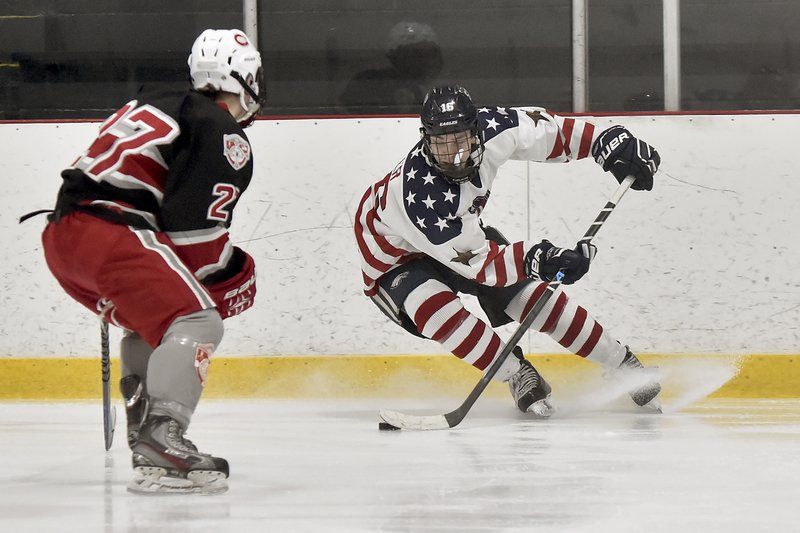 Hines, a 1st Lieutenant and Army Ranger with the 173rd Airborne Division, was killed in the line of duty on September 1, 2005, almost 10 years prior to that most glorious of nights in Prep hockey history.

So while members of the 2015-16 St. John’s Prep squad never knew him personally, they certainly feel like they know who Hines was as a son, a brother, a player and as someone who was committed to helping others.

The Eagles held their 8th annual Derek Hines Memorial Game Saturday at Ristuccia Arena, getting the two points they wanted after a 5-2 victory over Catholic Memorial. More importantly, the team presented a check to the Hines family for $10,425 to go towards the 1st Lt. Derek Hines Soldiers Assistance Fund.

“We definitely feel like we knew him,” said Prep captain Kyle Lynch, speaking of Hines. He and his teammates, as per custom, wore specially designed jerseys and socks for the occasion — red, white and blue, naturally, with an eagle’s crest on the front — and had a ‘Hines 23’ model hanging behind their bench throughout the contest.

“We hear the stories about Derek and who he was and what he was about,” added the Peabody native, “so we want to go out onto the ice with that same courage and will to win that he had. You have to win the battles before you can win the war.”

As he has done for the last eight years, Steve Hines delivered a pre-game message to the Eagles in their locker room. It’s one thing to hear about a former team captain from the Prep coaches; it’s another matter entirely to hear those words coming from his father.

“He read some of Derek’s words in Derek’s handwriting to read to us,” said defenseman Seth Murray, another St. John’s captain, “and made it clear to us that they had never been published before and hadn’t shown them to many people at all. To hear those words was very moving ... and I know it gave us a ton of momentum.”

A state policeman, Steve Hines let them resonate within the walls of the Eagles’ locker room.

“It’s amazing to think that this Sept. 1 will be 11 years,” he said of his oldest child (Steve and his wife Sue have two younger sons and a daughter). “And to think that more than 10 years later, they’re still telling Derek’s stories. That means a lot to us.

“We think about Derek’s will to win, his mental toughness, and being a good person and teammate. That stuff is still with us.”

Head coach Kristian Hanson, himself a former Eagles’ captain (1994) and huge supporter of the Hines family, agreed that his team was energized from the get-go.

“Mr. Hines always gets the boys fired up with his words,” said Hanson. “They listen to his message and hit the ice rarin’ to go. I thought it was great.”

The game itself was devoid of flow, due in large part to the inordinate amount of penalties called (15, with 9 of those called on St. John’s). At one point in the second period, five infractions were whistled in less than 60 minutes. The Eagles, who came into the outing taking just 2.75 penalties a game, killed off seven of the nine man-down situations they were issued.

Scott Newton, who along with linemate Anthony Quatieri both finished with a goal and two assists, got the Eagles (now 13-2-3) on the board 6:29 into the first period, but Catholic Memorial responded with power play goals at 9:32 of the opening period and 3:19 of the middle stanza to take a surprising 2-1 lead.

St. John’s Prep, which finished with 41 shots on goal, kept firing on Knights’ keeper Brendan Clancy, and the goals eventually started coming. Defenseman Josh Cole snuck down low and tucked a perfect pass from Quatieri in the back door to tie the game at 2-2; two minutes later, Quatieri gave St. John’s the lead for good with a 5-on-3 power play tally, a one-timer from the lower left circle.

“We knew Anthony was due (to score) and that he was going to come through soon,” said Murray. “He proved that today.”

A minute-and-a-half later, Danny Tighe’s team-leading 15th goal increased the Eagles’ lead to 4-2. The hosts buckled down defensively in the third, got 22 saves from captain Kyle Martin in goal, and junior Kyle Hentosh iced the game with an empty netter.

“We did what we had to do to win this game,” said Hanson, whose team has now won six straight and finished the Catholic Conference portion of its schedule at 3-2-3, good for third place behind B.C. High and Malden Catholic. “That might’ve been the longest second period I’ve ever been a part of,” — it took 44 minutes from the opening faceoff until the intermission buzzer — the kids stuck with what we wanted to do and grinded it out. That’s hockey; sometimes you have to do that to win games.”

Derek Hines’ old Prep jersey with the No. 23 on it is back with the Eagles and will again be hung in their locker room for every game. It’s a reminder to the players and coaches that the Prep hockey family’s lineage runs deep and is never forgotten — even by those who made the ultimate sacrifice for their country.