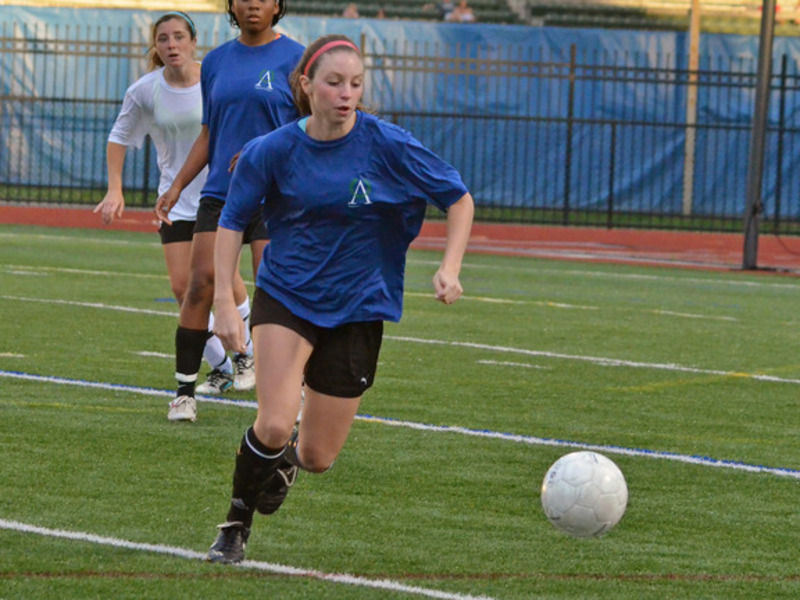 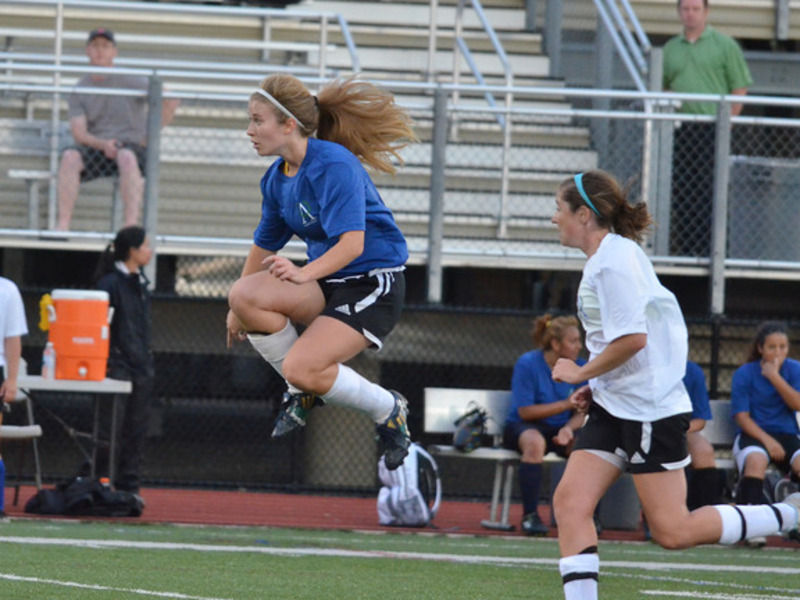 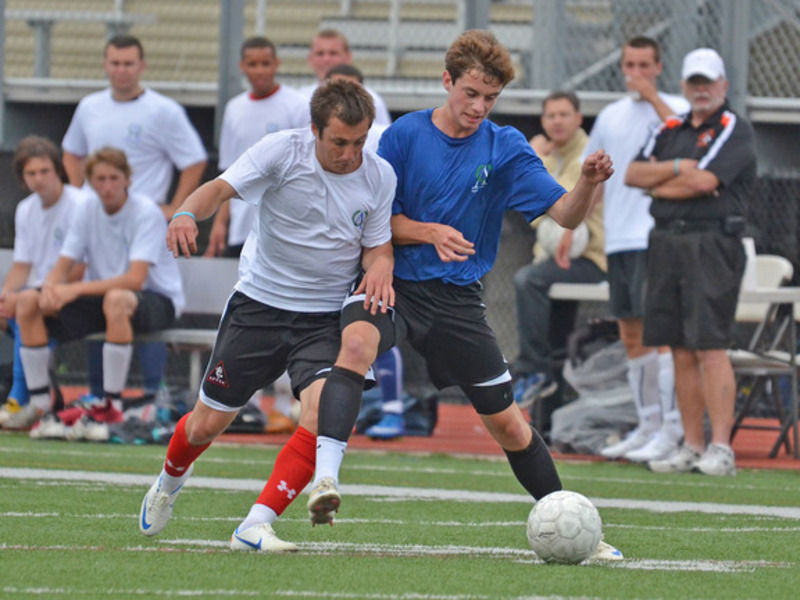 Two players battle over control of the ball during the Agganis Men's soccer classic yesterday. The North defeated the South, 7-3. 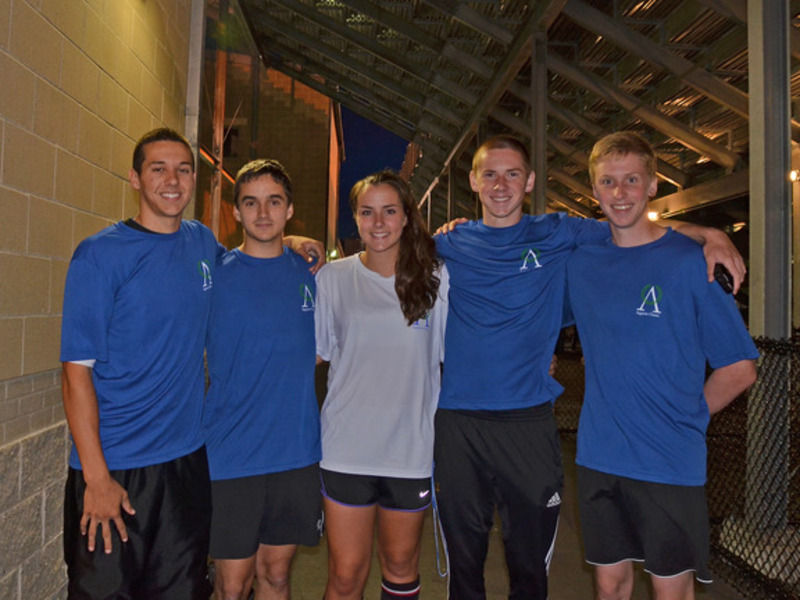 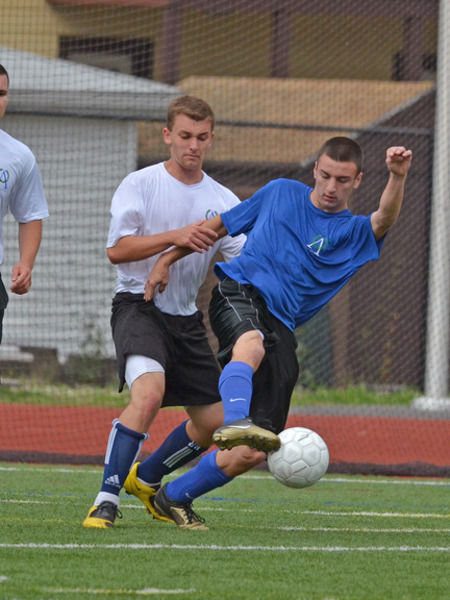 Two players battle over control of the ball during the Agganis Men's soccer classic yesterday. The North defeated the South, 7-3.

LYNN — The North offense was on fire in a 7-3 victory over the South in the 17th Agganis Men’s Soccer Classic. The Women’s Classic that followed was a much more defensive struggle, ending in a 1-1 draw at Manning Field.

In the men’s game, it was an easy choice for MVP of the North squad because forward Jon Amico of Danvers had a monster game. He figured in four of his team’s scores with a hat trick and an assist.

“We played well as a team,” said Amico, who is going to High Point next year. “In an all-star game like this, everybody is really good, and I had a lot of people setting me up.”

The game was tied at 2-2 at halftime before the North broke it wide open. Ryan McManus of St. John’s Prep put the North on the board two minutes into the game, and then gave his team the lead for good with just under two minutes gone in the second half. He was named North Offensive Player of the Game.

“It’s so much fun to play in this game,” said McManus, who is going to Bentley, where he will try to make the team as a walk-on. “I had the chance to play with a few friends from the Prep and my club team (Aztec) one last time.”

North center midfielder Colin Mahoney from Peabody also scored a goal. Next year, he will play forward at St. Anselm. MVP of the South was Pedro-Lucas Ferriera from St. Mary’s, and the Defensive Player was Dimitri Flessas from Salem. Masconomet’s Chad Burke scored the last goal for the South.

“I was surprised to be chosen,” said Flessas, a defenseman, who will play at Salem State in the fall. “All our defensemen played well. There was a lot of talent in this game, and it was fun to play with so many talented people.”

The South squad was coached by Michael Collins of Salem and Masconomet’s David Mitchell. The North now holds an 8-7-2 advantage and has won the last three.

“The North shot very well, but it was a fun game for everybody,” Mitchell said. “This is a great tribute to Harry Agganis and his family. It’s wonderful to see all the games going on this week with so many talented athletes from all over the North Shore.”

In the 17th Women’s Classic, the goals were hard to come by after the South scored 39 seconds into the game when MVP Brianna Anderson of St. Mary’s put the ball in the back of the net. It was a quick beginning, but turned out to be the only goal for the South.

“That was a great way to start off,” said South defensive stalwart Maura Doyle of Bishop Fenwick. “It’s too bad we couldn’t have scored a few more. There were so many talented players on both sides. It’s an honor to be chosen as one of them. This was a good chance for me to get some touches on the ball because I’m starting my preseason training to get ready to play at Keene State.”

Beverly’s Katherine Creamer started in goal for the South and came up with some great saves to keep the North off the board in the first half. Creamer made a diving stop on a low, hard shot by Hannah Weagle, who was named North MVP. Later in the half, she denied center midfielder Kelleigh Lombard from Melrose with Pentucket’s Leigh McNamara standing at the corner of the net ready to pounce on a rebound, but Creamer smothered it.

Weagle, who will play at Franklin Pierce, knotted it up midway through the second half. The North had two excellent opportunities to take the lead in the late going. The first came with eight minutes left when Jessica King of Salem’s shot hit the far post but stayed out, and then Lombard’s bid was turned aside by South goalie Melissa Toomey.

“It’s really great to be picked MVP in a game like this,” Weagle said. “It was a big surprise when my name was called. We didn’t get off to a good start when they scored so early, but we got it together in the second half. I’m so glad I was able to represent my high school one last time.”

Whitney Whitlow of Amesbury was named North Defensive Player of the Game, and Alexandra Riddle of Central Catholic received that honor for the South.