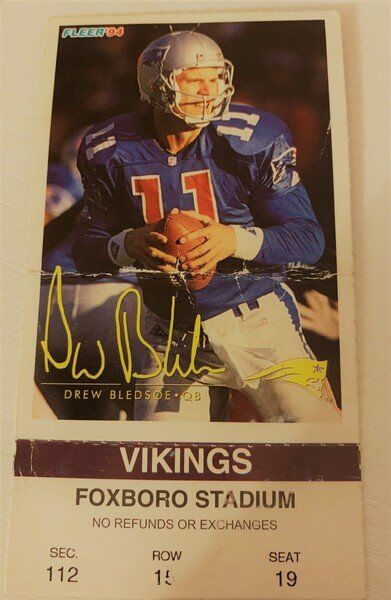 Phil Stacey's game ticket from the Patriots' comeback victory over the Minnesota Vikings in 1994, in which Drew Bledsoe set NFL records for most passes (70) and passes completed (45) in New England's OT victory. 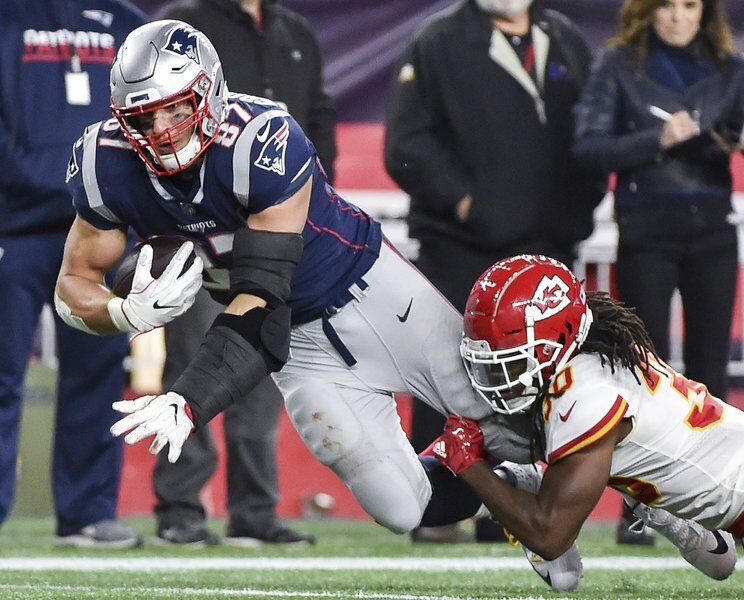 Rob Gronkowski and the Patriots escaped a wild comeback by defender Josh Shaw and the Kansas City Chiefs in 2018, holding on to win, 43-40.Staff file photo/Jaime Campos 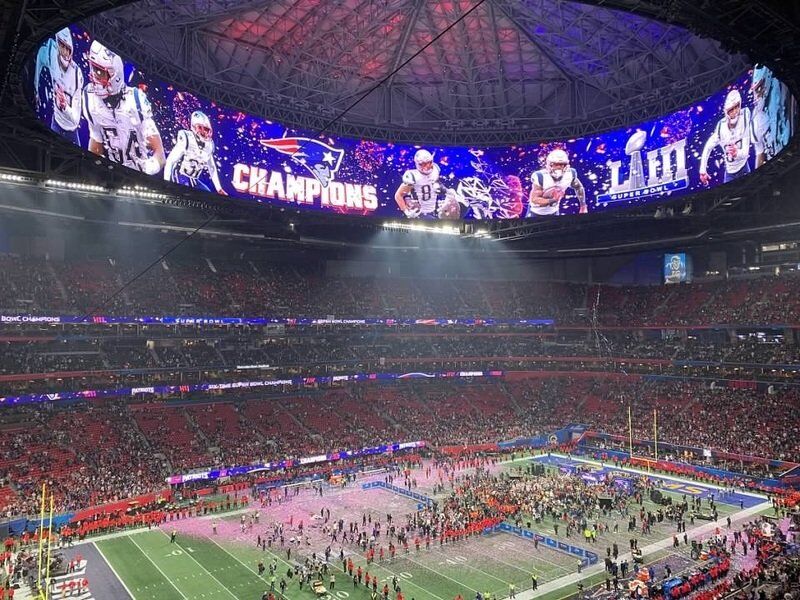 In today’s ‘Our Favorites’ we pick our favorite NFL games that we've attended as fans.

This game started out as a dud, with Minnesota racing out to a 20-0 lead before Matt Bahr kicked a field goal for the Patriots just before halftime. It appeared that Bill Parcells' club was bound for its seventh loss in 10 games, with any hopes of the playoffs in the NFL's 75th anniversary season about to end right there on the grass at Foxboro Stadium.

Then Drew Bledsoe went absolutely bananas. With the Patriots using just one running play in the second half and OT, the big-armed second year quarterback started chucking the rock all over the field, finishing the day with NFL records for pass attempts (70) and completions (45) while throwing for 426 yards. He found Ray Crittenden for a 31-yard scoring strike in the third quarter, then hooked up with Leroy Thompson (11 catches) for a 5-yard TD with 2:27 to play, making it 20-17. The Patriots' defense held Warren Moon & Co. to 3-and-out and got the ball back with 1:51 left, and Bahr tied the game with 14 seconds left with a short field goal.

In OT, Bledsoe marched the Patriots 67 yards downfield in 8 plays, hitting fullback Kevin Turner with a 14-yard TD pass in the left corner of the end zone — and from our seats, we had a great view of the entire play — for the unlikely game-winner.

Such an interesting game to witness on Sunday Night Football. Tom Brady and the Patriots raced out to a big lead, and at the same time you had your eye on the Red Sox American League Championship Series game on the huge screen in the parking lot over your shoulder in the cheap seats. Then in a flash, literally given the speed and big plays from Kareem Hunt and Tyreek Hill, Pat Mahones and the Chiefs were back in it.

I've seen a bunch of Brady game-winning drives in person, but given the opponent and the setting this walk-off winner took the cake.

Despite being a huge NFL and Patriots fan, I've only actually attended two games in my lifetime. One of those I was so young that I don't even remember who the Pats played; I do remember, however, sitting on those cold silver bleachers before the stadium was renovated to its current state.

The other game, though, was quite forgettable. It was the birth of the Wildcat offense, and the visiting Dolphins used it to wreak havoc on their AFC East foes. Following the lead of running backs Ricky Williams and Ronnie Brown — the latter of whom went bonkers with 4 TDs — the Dolphins dismantled the Pats while leaving players and coaches shocked and puzzled about what was happening. Coach Bill Belichick simply had no answer and his team often looked silly in attempting to stop the madness. It's an offense that's occasionally still implemented, though never as efficient as that wild afternoon in Foxborough.

It certainly wasn't the most exciting contest in the Patriots' dynasty run, but getting the chance to watch the team I root for win a championship has to be the most memorable game I've ever attended.

This one was one of Bill Belichick's greatest masterpieces, totally stifling the Rams offense by keeping them out of the red zone the entire game. The Rams defense was also up to the task, making several big stops before Tom Brady got hot in a fourth quarter drive, where a 29-yard pass up the seam to Rob Gronkowski led to a 2-yard TD plunge from Sony Michel to break a tie game with just over seven minutes to go.

The pro-Patriots crowd made it that much more memorable as at least 80% of the fans in attendance at Atlanta's Mercedes Benz Stadium were rooting for the Pats to bring home title No. 6. It was also memorable because I got to sit directly in front of Tony Dungy, the former Super Bowl winning coach for the Colts and former Pats nemesis in the early 2000s. He was a nice guy, but I don't think he enjoyed the outcome of the game.