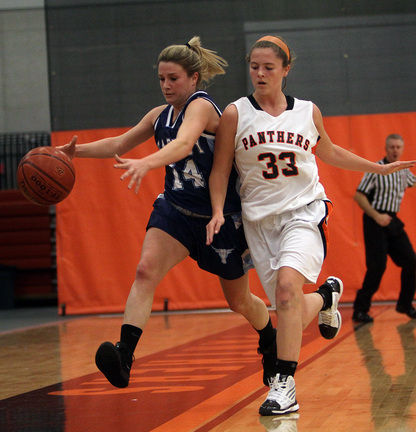 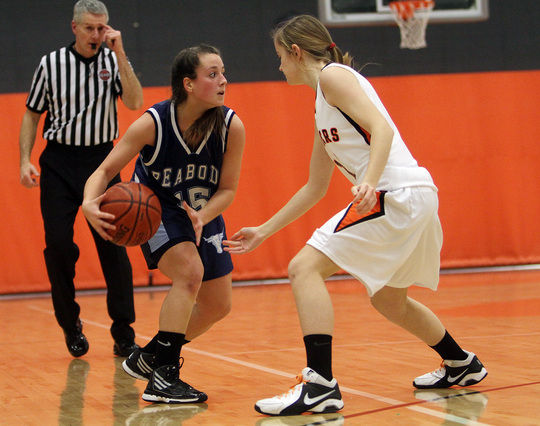 Peabody’s Jacquelyn Goodwin looks to make a pass in a 53-51 win over Beverly last night.

Peabody’s Jacquelyn Goodwin looks to make a pass in a 53-51 win over Beverly last night.

BEVERLY— Matt Smith's Beverly girls basketball team has nothing to be discouraged about after the way it played last night. The young Panthers showed that despite its 53-51 overtime loss to Peabody, it will continue to gain experience with each game played.

The Tanners found themselves down by 10 points midway through the fourth quarter. In a minute span, senior captain Taylor Provost hit two 3-pointers for Peabody to cut the deficit to two. The score teetered in the final minute of play, until sophomore Alexandra Lomasney drained a three at the buzzer for the Tanners and sent the game into overtime.

Peabody's Victoria Digiacomo scored the winning overtime basket with a minute to play. The Tanners' defense remained solid in the final minute and prevented Beverly from getting any open looks.

The Panthers, who dropped their second straight game, had the offensive momentum in the first half. Senior Erin Silvestri led all scorers with 23 points, including six 3-pointers, but cooled off as the fourth quarter started. Peabody was able to hang around and made its move at the right time — and Beverly saw its lead slip away.

"Beverly's defense and intimidation was far superior than ours," said Heil. "Beverly really played an outstanding game and I think if anything we just out-lucked them."

Two of Beverly's newest members, juniors Tatyana Murad and Christina Hart have been a successful compliment to the rest of the Panther lineup. Hart worked the boards down low and finished with six rebounds along with eight points. Murad, who scored five points off the bench, showed her skills bringing the ball up the court and fits in as the Beverly's backup point guard.

"We're only going to get better," explained Panthers' head coach Matt Smith. "It was huge a improvement from last game. I'm happy with the way the girls played tonight, I mean what are you going to do it was a bank three. We played hard, but we had 22 turnovers; so those are the things that we're going to be working on."

Peabody's Carolyn Scacchi had the reach over everybody last night. At 6-foot-2, the sophomore forward grabbed 12 rebounds and scored a team-high 15 points. Scacchi, who can post up with the best of them and isn't afraid to shoot outside, played nearly the entire game — sitting down for only a minute early in the first.

"She can play a game and not score, but still be a reason why we win," said Heil of Scacchi. "She rebounds and is an inside presence. I don't know what's better her offense or her defense."