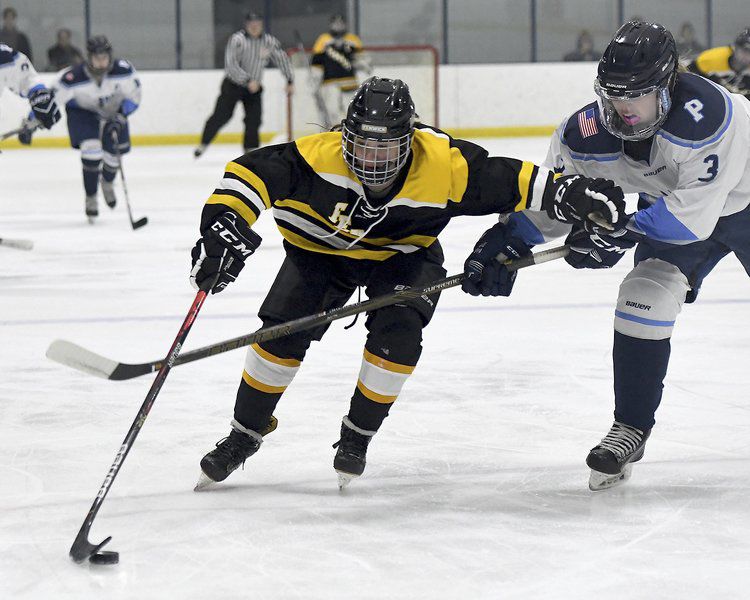 Bishop Fenwick's Abbey Millman breaks free up the side of the ice. Rose Raymond photo 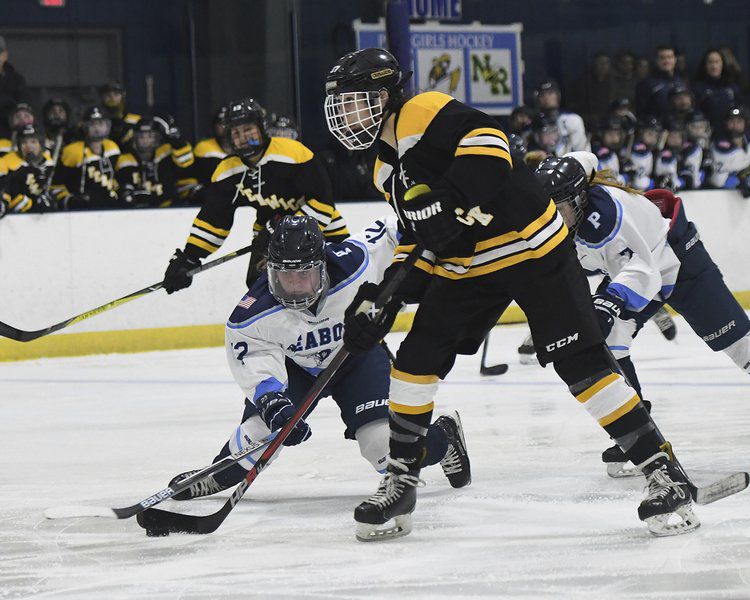 Bishop Fenwick's Lauren Dirarian skates away from a defender to get a shot on goal. Rose Raymond photo 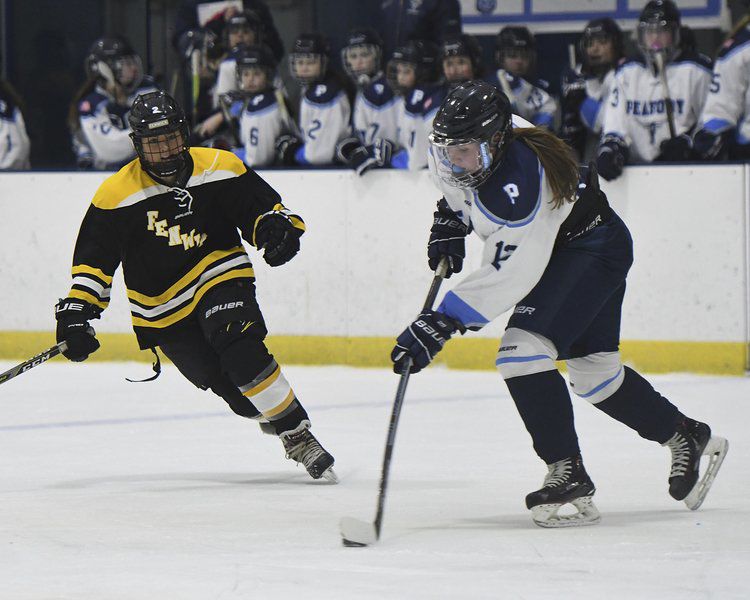 Peabody's Chloe Shapleigh tees up a shot from the blue line in her team's 4-1 win over Bishop Fenwick. Rose Raymond photo 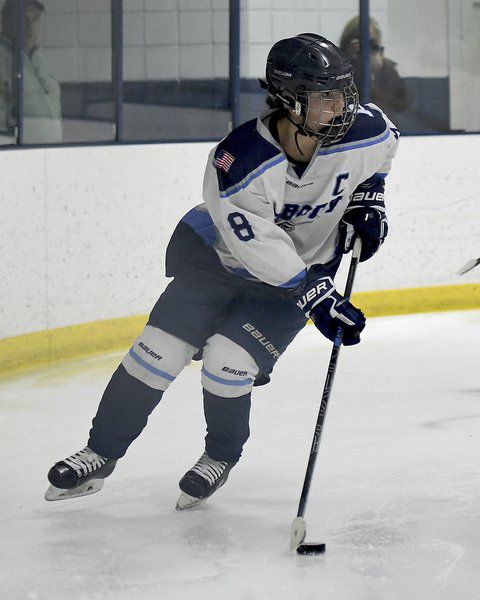 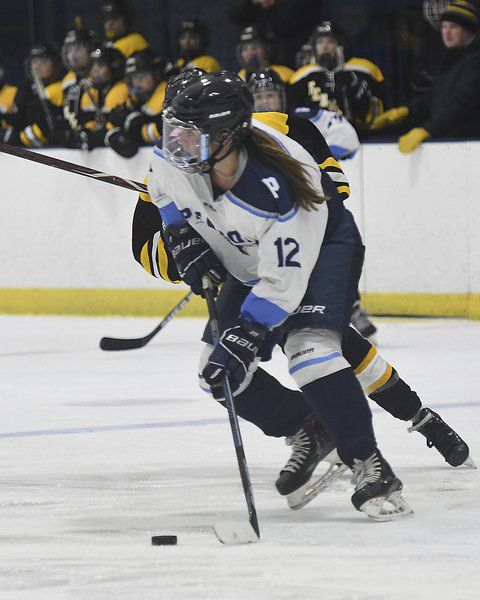 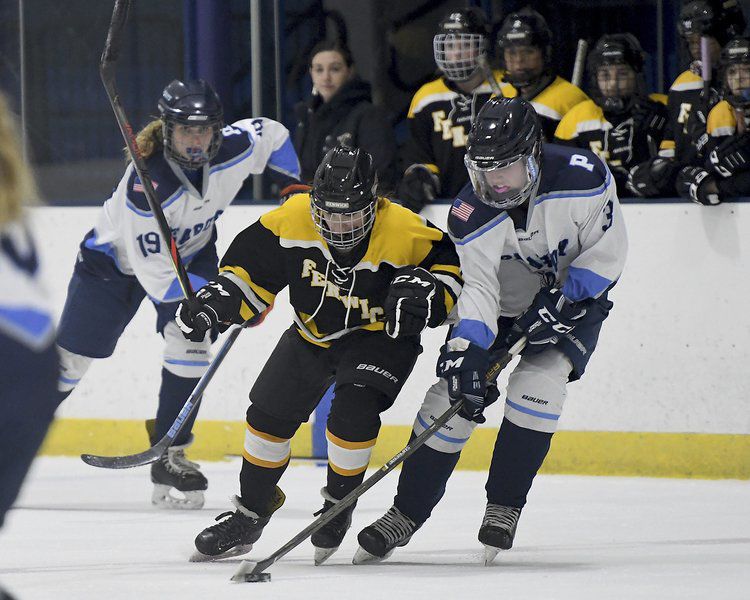 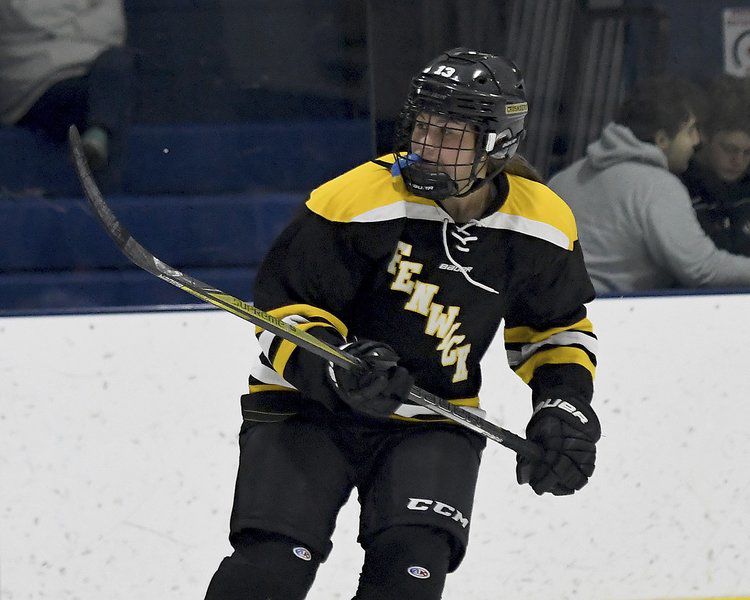 Bishop Fenwick's Abbey Millman breaks free up the side of the ice. Rose Raymond photo

Bishop Fenwick's Lauren Dirarian skates away from a defender to get a shot on goal. Rose Raymond photo

Peabody's Chloe Shapleigh tees up a shot from the blue line in her team's 4-1 win over Bishop Fenwick. Rose Raymond photo

PEABODY — Bishop Fenwick girls hockey coach John Kastle had one last piece of advice for his Crusaders before they took the ice Wednesday against rival Peabody: "Remember, we can't play a man down."

In the third period though, the Crusaders wound up shorthanded due to both penalties and injuries. The Tanners took full advantage to pull away for a 4-1 win, knocking Fenwick from the ranks of the unbeaten courtesy of goals by four different skaters.

Ahead 2-1 entering the final frame, the Tanners (7-2) got some wiggle room on Lily Piscatelli's goal, then more-or-less made the win official when defenseman Reilly Ganter rifled home a 5-on-3 goal with just over five minutes to play.

"Even if we killed off the penalties, it takes so much energy. We had to be a little more disciplined," said Kastle, his team now 6-1-2 and who lost two-way center Lauren Dirarian to injury in the second period. "That really impacted our forward lines. We don't have a ton of depth; overall, we played hard. There was no quit."

Winners of three straight, the Tanners were also a bit shorthanded. Defenseman Catherine Sweeney was out with the flu and top line winger Hannah Gromko is injured. Peabody tried to roll just three defenseman early, but the results weren't great as Fenwick controlled the flow in the opening period while jumping out to a 1-0 lead on Dirarian's breakaway snipe.

Peabody opted to drop forward Ella McTeague back to the blue line to make an even four-skater rotation. That opened up spots on the wing for Piscatelli and Spack, who combined with junior captain Jenn Flynn (goal, assist) on the crucial third tally.

"We had to do some last-minute shifting and it didn't look the way we wanted, so we shuffled it up right away and the girls handled that well," said Peabody coach Michelle Roach. "I felt confident in moving Ella because she's so consistent. She'll get on pucks, she'll get on bodies and you know she's always going to give 110 percent."

Despite an acrobatic save attempt by Fenwick goalie Cailyn Wesley, Flynn got the game tied on a rebound late in the first period after junior Chloe Shapleigh made an outstanding play to keep the puck in the offensive zone and flicked it on net.

Peabody captain Sammie Mirasolo netted the winner midway through the second when she was sent in by Paige Thibodeau. Mirasolo kept the puck on the ice until she was an inch away from the cage, then pulled to her backhand for a gorgeous game-winner.

"It was a beautiful goal," said Roach. "You love seeing Sammie get to open ice. She could've rushed because Cailyn's a great goalie but she kept her cool and made a great move."

Wesley made a diving stick save on Spack to bring the fans to their feet and finished with 26 stops. Though it was the first time all year Fenwick had allowed more than two goals in a game, it was impossible to fault the goalie since Peabody had the puck almost the entire third period.

"Cailyn was great," said Kastle. "It's tough to hold Peabody off the board so we knew one goal wasn't going to be enough. We always try to play an attack triangle and we got away from that a little bit."

Tanner goalie Jeny Collins made 20 saves including a breakaway stop of Dirarian early in the second period. Gabby Davern also had a few quality chances for the Crusaders while Abbey Millman and Emma Perry also gave the Tanner defense some trouble. Freshman Zoe Elwell had an assist on Dirarian's tally.

"John's doing a fantastic job. Fenwick had us running there in the first period and we had to regroup," said Roach, who came away impressed with the play of freshman Spack and sophomore Piscatelli on the wings after the lines were juggled.

"We needed people to step in up front and they played big. They were integral in helping us pull out this win. It wasn't going our way early but we figured it out, we pulled through and I think that's a really good sign for us."