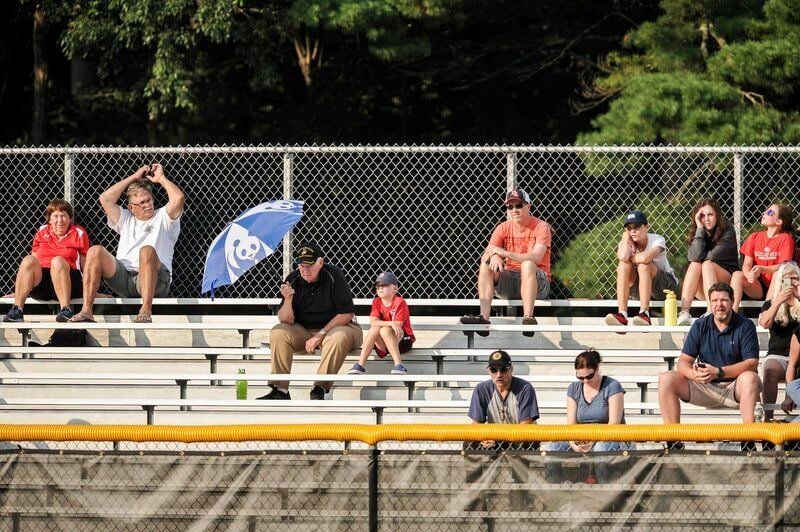 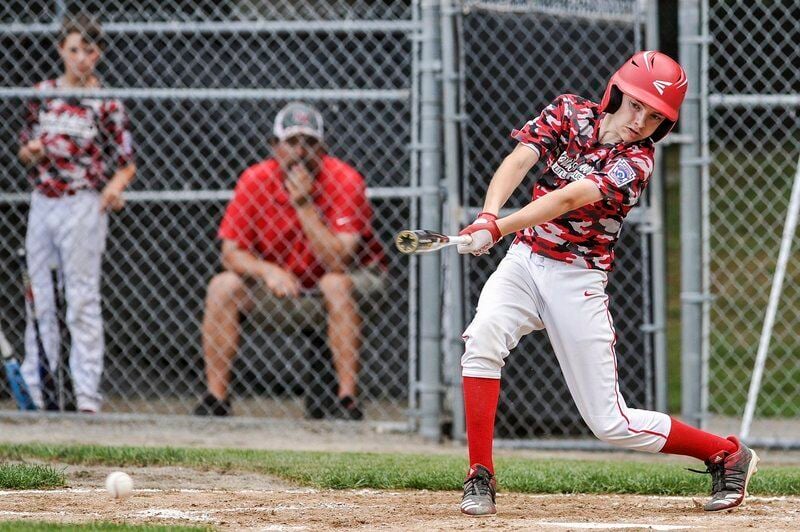 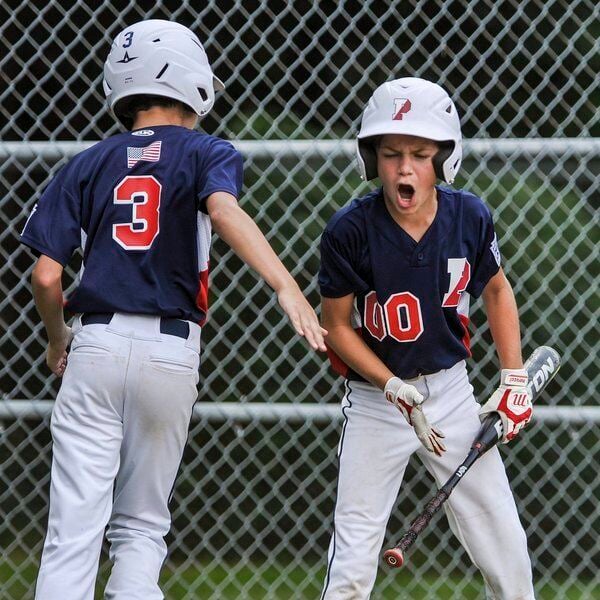 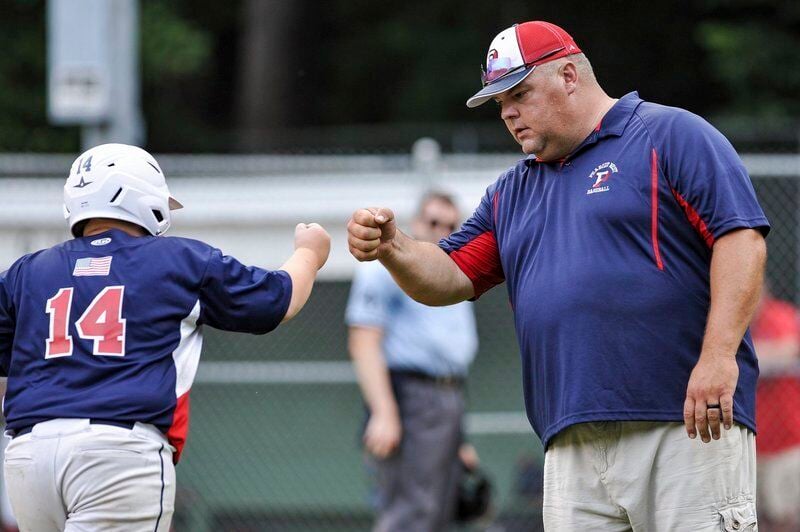 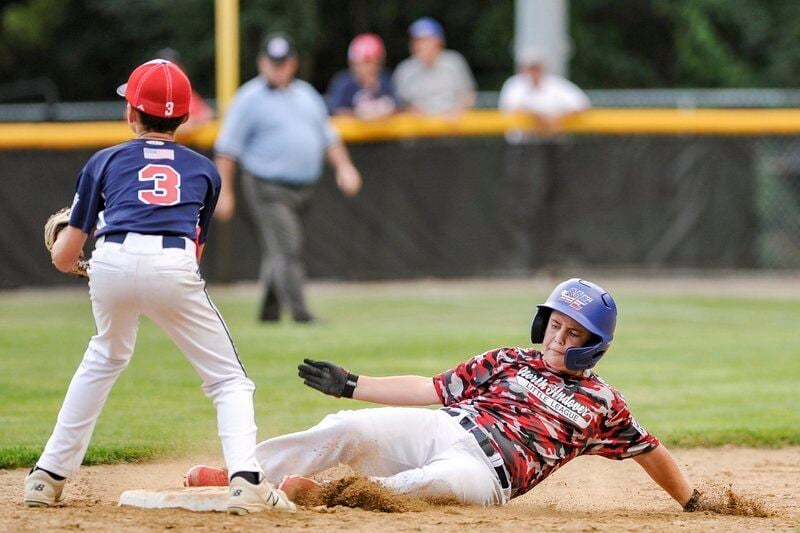 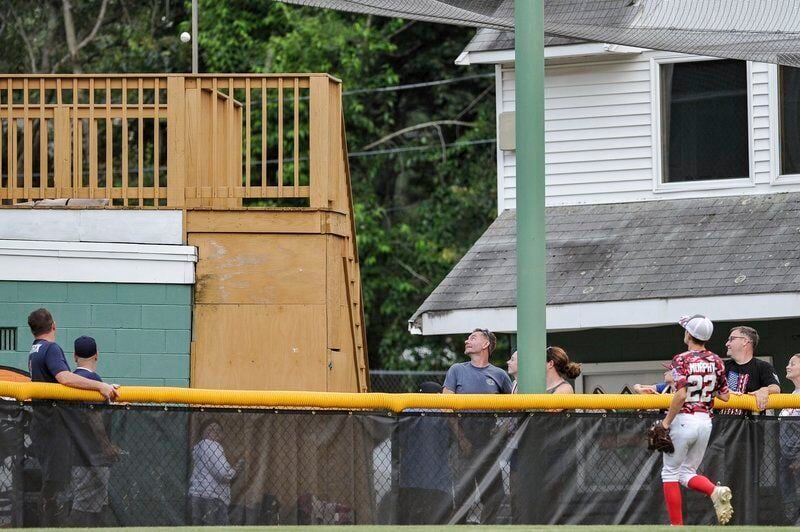 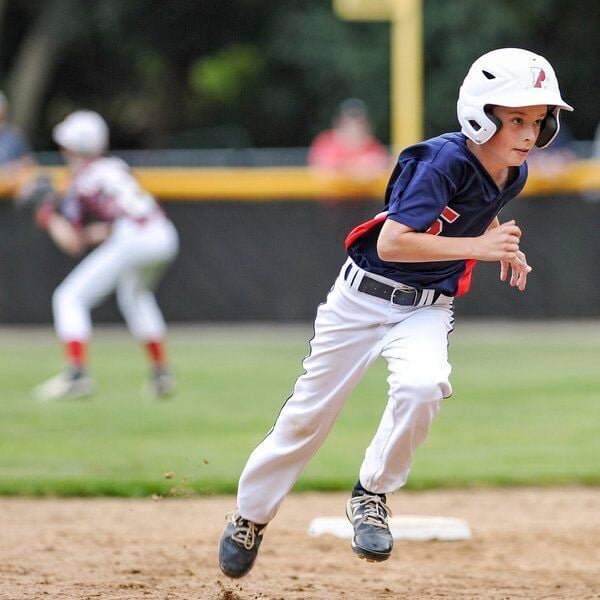 Peabody West’s Ryan Skerry (5) rounds second base after a base hit by a teammate during Wednesday’s game. 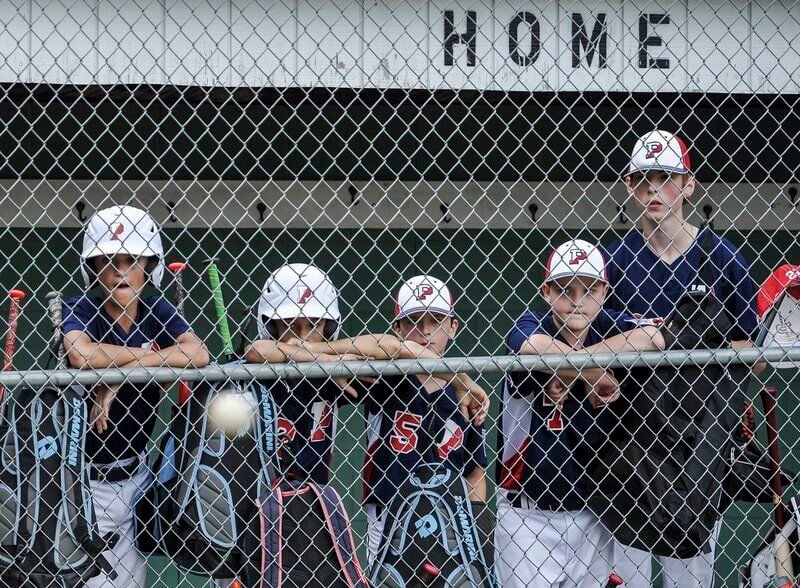 JAIME CAMPOS/Staff photosPeabody West players look on from their dugout during Wednesday’s game. 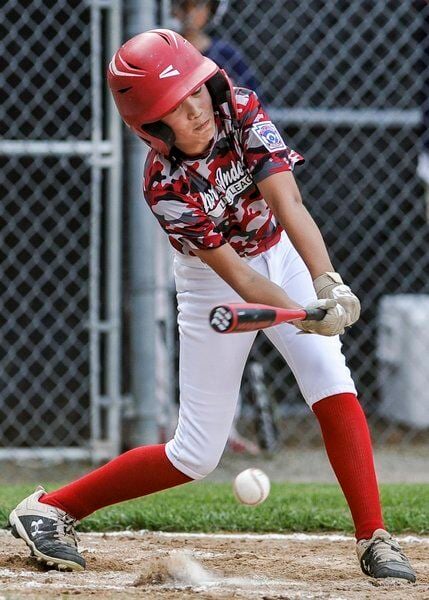 Peabody West’s Ryan Skerry (5) rounds second base after a base hit by a teammate during Wednesday’s game.

JAIME CAMPOS/Staff photosPeabody West players look on from their dugout during Wednesday’s game.

BEVERLY -- That old cliche about it not being over until the fat lady sings was never truer than in the Section 4 Williamsport Little League opener at Harry Ball Field on Wednesday evening.

It took extra innings for Peabody West to pull out a 7-6 victory over North Andover after rallying from a five run deficit to the sixth.

Just when it seemed North Andover had this one in the bag Peabody made the most of its last at bats in regulation to knot it up. In the top of the seventh NA reliever Jake Gallant got the first two outs before Cullen Pasterick beat out an infield hit and advanced on a wild pitch to set the stage for Marky Bettencourt, who ripped an solid single to right field, knocking in his third run of the game to put West ahead, 7-6. They left the bases loaded, but that one run proved to be enough.

Reliever Brendan Kobierski hit Brayden Salach to start off the bottom of the frame, but got Trey Martin to fly out. Ben Sullivan-Lattuga hit into a fielder’s choice for the second out, erasing Salach at second.

Dunny Murphy was intentionally walked, but Brendan Foley lined to shortstop Jimmy DiCarlo to end the game and give Peabody the win in the round-robin format.

“It’s a real tough decision to put a runner on second base in a one run game, but in that situation you have to go with good baseball rules, not Little League,” said District 16 champion’s manager Mark Bettencourt. ‘“That line shot was hit hard, and a couple of inches either way could have ended it in their favor.”

There were a lot of heroes for West in this one led by the younger Bettencourt, who started the sixth inning rally with a two run dinger over the right field fence, and the next time up delivered the clutch hit to drive in the winning run. He ripped the cover off the ball in his last three trips to the plate, narrowly missing a homer in the fourth inning when centerfielder Charlie Grasso leaped up to catch the ball just before it went over the fence.

Another key contributor was Kobierski, who pitched 2 2/3 innings in relief and worked his way out of jams. He also came up with a solo homer in that big sixth inning after the District 14 champs scored three runs in the fourth and three more in the fifth to take what appeared to be a commanding, 6-1 lead.

“What an unbelievable game,” said NA manager Brendan Salach. “We got off to a great start, but they came back. We had a couple of bad bounces, but they also hit the ball hard to get back in it. I’m proud of my boys, and we’ve got to put this one behind us and move on.”

North Andover used five different pitchers, making changes with pitch counts in mind to keep them eligible for future games. Sullivan-Lattuga started and worked the first two innings before giving way to Murphy. Peabody had only one hit, a single by No. 9 batter Ty Lomasney, who came in to score on Jimmy DiCarlo’s sacrifice fly in the third inning.

Lomasney also had a key RBI single in the sixth to drive in the tying run. He did it all both at the plate and in left field with a shoestring catch to rob Sullivan-Lattuga of extra bases.

“This was a great chess match between two teams with tons of talent,” said manager Bettencourt. “I can’t say enough about different kids, who either had big hits or made plays in the field. It takes one streak to get things going. They had theirs first, and then we had ours. Hitting is contagious, once they start coming everybody hits.”

Pasterick started for Peabody, and was cruising along without any base runners until the fourth inning when Sullivan-Lattuga had an RBI single, and Murphy belted a two run homer to put his team ahead, 3-1. They added to the lead in the next inning, sending nine to the plate and tacking on three more runs. Bettencourt had come on in relief, but wasn’t as sharp as usual, and Kobierski took over.

“Mark walked two which is unusual, and he was out of his rhythm so I went to Brendan,” said Bettencourt. “He got into his groove, and pitched unbelievable innings in relief.”

For West Ryan Skerry and Jackson Taylor (double) came up with clutch hits in the five run sixth inning. Peabody had only one hit until Bettencourt showed his power with the two run bomb which was the first of seven hits in the last two innings. Catcher Aidan Horgan tagged two runs out at the plate, one in the fourth inning and another in the fifth.

Grasso, Martin, and Will Remis each had two hits for NA. Danvers American will take on North Andover in the first game of a double header Thursday night (5:30 p.m.) while Peabody faces Reading at 7:30 back at Harry Ball.