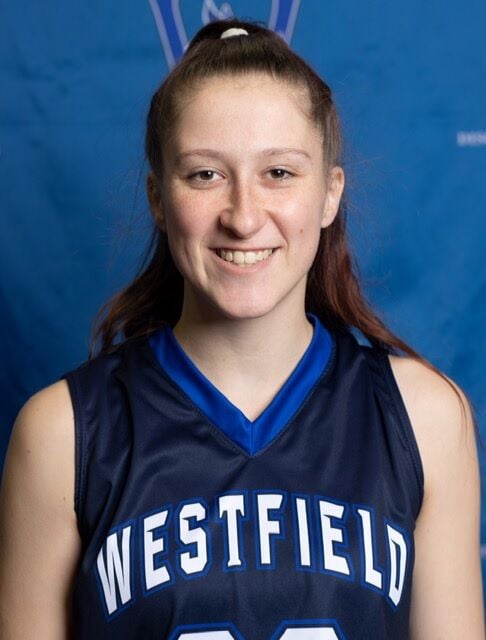 It was only a matter of time before Peabody’s Melissa Gray became the all-time leading scorer in Westfield State women’s basketball annals.

The fifth-year player and team captain, who returned for her final season of eligibility after COVID-19 wiped out the 2020-21 Westfield State season, finished with 24 points in a 107-95 upset win over host SUNY Polytech in Utica, N.Y. Saturday.

Gray now has 1,536 career points — breaking the WSU mark that had stood for 24 years — and still has another 13 regular season games that are scheduled for the Owls, plus any potential playoff contests.

The 5-foot-9 guard entered the game in third place all time behind Beverly native Jen Ashton (1,524) and record holder Amanda Braden (1,526). Gray promptly tied Ashton’s mark with her fourth 3-pointer of the first quarter against the Wildcats, then set a new school record by draining another trifecta at the start of the second quarter.

She was red hot in the first half, scoring 22 points, and played a big role in the Owls’ pressure defense that caused 18 turnovers (and 29 for the game). Gray’s hot hand helped Westfield State (now 4-7) shoot out to a 51-40 halftime lead.

“I’m so grateful to be able to come back and play another year, and that it worked out because not everyone gets that same chance,” Gray told Owls associate athletic director Dave Caspole on the bus ride home from New York. “I love playing for Westfield and coach (Andrea) Bertini (a former Salem High and Westfield star) and with my teammates. They’re all very helpful and encouraging me to shoot it when I’m open.”

Having never been to Utica previously, Gray admitted having some nerves early on, but didn’t force her shots. The former Peabody High star has always had a calm demeanor, quietly doing all the things she does so well.

Bertini was happy to get in a game with the Wildcats after several last-minute cancellations due to COVID and Omicron cases on the rise.

Westfield State had some special things planned for Gray, thinking she’d set the record in the school’s home game against Hunter (N.Y.) College on January 2, but that tilt was canceled due to pandemic regulations.

Gray said she came into the season focused on helping the team win and not her individual records. She pointed to the importance of team chemistry with so many new players this season. The Owls got off to a slow start, but have come together and are making a run.

The next all time record she’s taking aim at is held by Bertini, who hit 287 three-pointers in her career. Heading into her team’s next game this Wednesday at Salem State, Gray is just six behind that mark.