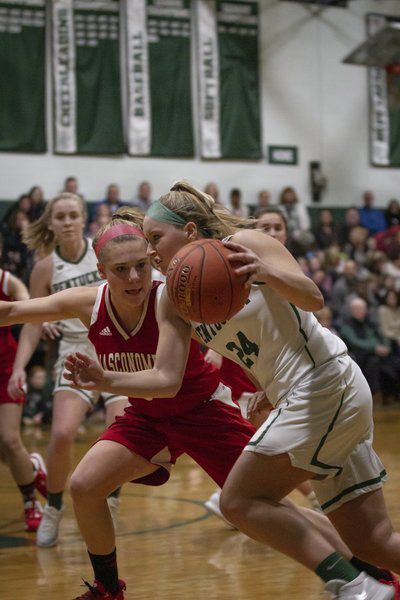 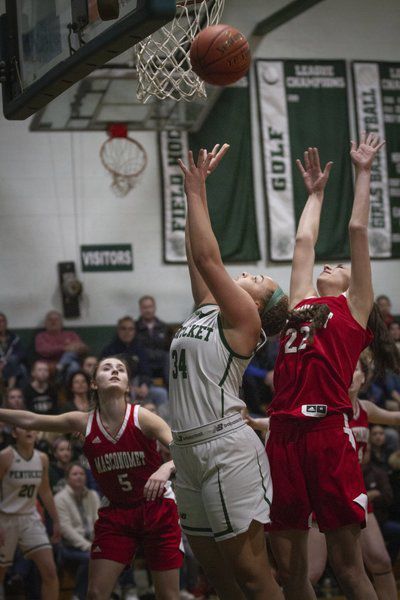 Ben Laing photoPentucket's Mackenzie Currie lays a ball in while defended by Masconomet's Caroline McSweeney during Friday night's game in West Newbury. Currie led the Sachems with 15 points in the win. 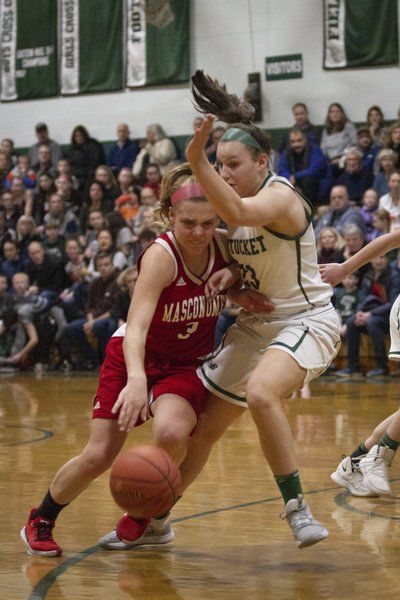 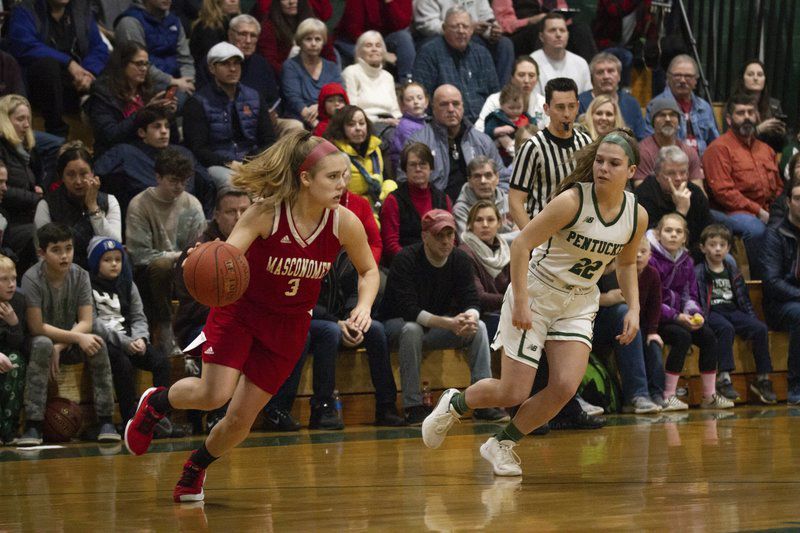 Ben Laing photosMasconomet’s Mak Graves brings the ball up the court while being defended by Pentucket’s Angelina Yacubacci. 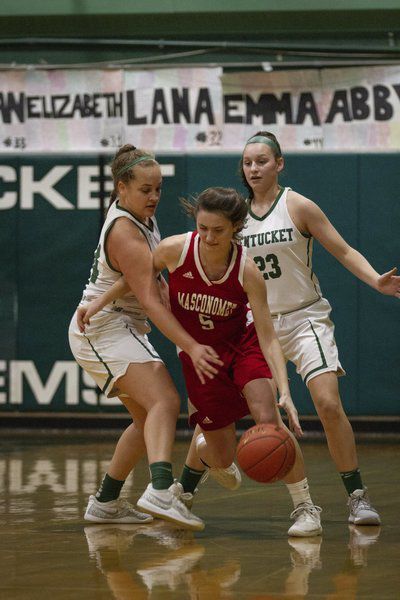 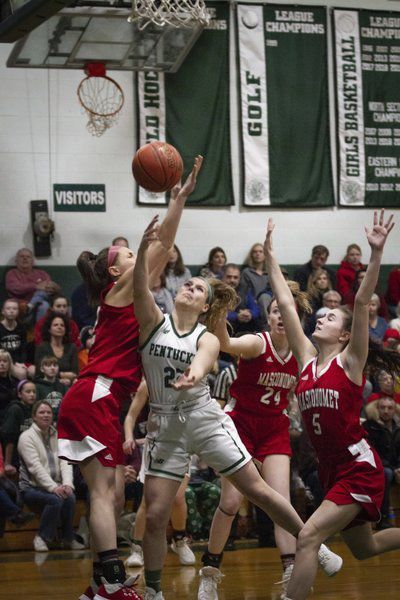 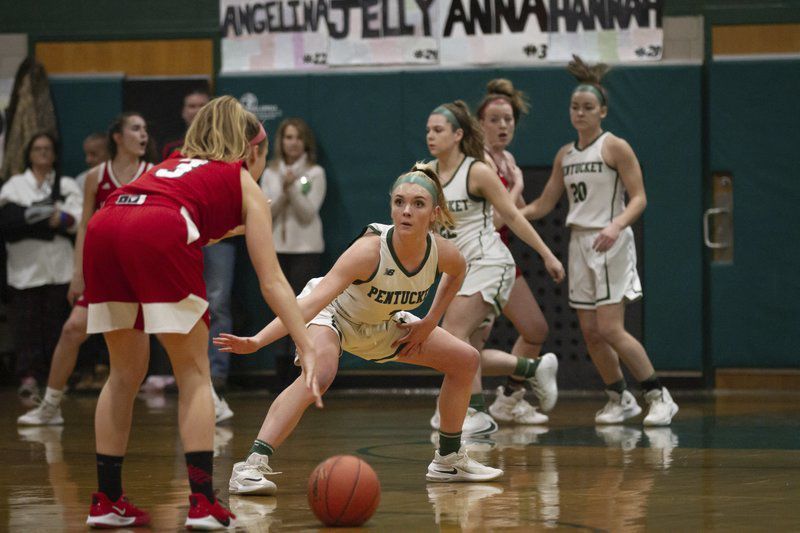 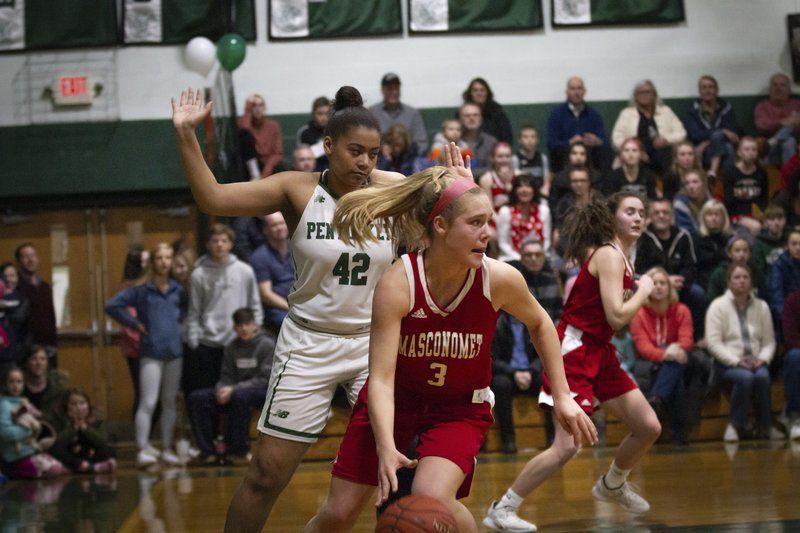 Ben Laing photoMasconomet's Mak Graves looks to start a fast break after grabbing a rebound away from Pentucket's Arielle Cleveland.

Ben Laing photoPentucket's Mackenzie Currie lays a ball in while defended by Masconomet's Caroline McSweeney during Friday night's game in West Newbury. Currie led the Sachems with 15 points in the win.

Ben Laing photosMasconomet’s Mak Graves brings the ball up the court while being defended by Pentucket’s Angelina Yacubacci.

Ben Laing photoMasconomet's Mak Graves looks to start a fast break after grabbing a rebound away from Pentucket's Arielle Cleveland.

No matter that Masconomet’s Mak Graves had just drawn a foul the Sachems couldn’t afford to give and made both free throws, the Sachems still had a 44-42 lead with 11.3 seconds left and the ball. Just get the ball in bounds, make your free throws, and it’s all good.

Graves wasn’t about to let it happen that easily.

Eying the inbound from midcourt, the standout point guard jumped in front of the pass for the steal and drove to the hoop as time ran down. The electric standing room only crowd in Pentucket Regional High’s gym fell silent for the only time all game as the ball hung in the air, but when it wouldn’t go down, the celebration was on in full force as the Sachems survived their toughest test of the season.

“I was petrified,” said Pentucket coach John McNamara, who now has 299 wins for his career. “I thought she was going to pull up and shoot a three, I was kind of happy when she drove because it was like at least we can keep playing, but yeah, petrified. We didn’t execute at the end very well and they made a nice play and got the ball in their best player’s hands, and that’s scary.”

The helter skelter ending was a fitting cap on one of the league’s best games of the year, which also marked the final meeting of Pentucket and Masconomet as Cape Ann League rivals. There were 11 ties or lead changes from the second quarter onwards, with Pentucket erasing 9 and 7-point deficits along the way before holding on for dear life in the final minute.

Defensively the two sides were on their game from the opening jump, with Masconomet overcoming some deafening crowd noise to jump out to an early 16-7 lead at the end of the first quarter.

By midway through the second, Masconomet had taken three charges, including two called against Pentucket standout Angelina Yacubacci, who sat for much of the game due to the resulting foul trouble. With the usual scorers being held in check, McNamara looked to get a spark elsewhere, and he got it in the form of a 10-0 run led by Arielle Cleveland, Hannah Lambert and Abby Dube.

Taking a 22-21 lead into halftime, Pentucket once again took a big shot from Masconomet in the third, getting outscored 13-5 in the frame to fall behind 34-27 entering the third. Needing another run, Mackenzie Currie took control and made a series of driving baskets to get within one possession, and then Yacubacci finally started heating up, capping off an 8-0 run with a brilliant basket to give the Sachems back the lead.

“When she finally got back in she’s a difference maker,” McNamara said. “She made plays for us and we’re a different team with her on the bench.”

Yacubacci and Arielle Cleveland scored Pentucket’s last five points in the final minutes, at one point pulling ahead 44-40, but Masconomet made one last push to nearly tie the game. Between her free throw shooting and the last second floater, Graves (17 points) gave her team a chance right down until the end.

“Our toughest competitor, the ball should be in her hands at a time like that,” said Masconomet coach Shannon Kirwan. “Unfortunately it’s a tough look, she’s attracting so much attention so much of the time anyway, that floater honestly she hits nine out of 10 times, it’s just the one.”

In addition to Graves, Masconomet also got nine points and five rebounds from Olivia Filmore, and collectively the Chieftains outrebounded the Sachems 30-22 and took four charges. Overall Masconomet played far better than it had in Tuesday night’s loss to fellow CAL power Amesbury, but the Chieftains came up short for their fourth CAL loss in a row.

“We’ve really been working on our defense and sacrificing yourself for the good of the team,” Kirwan said. “I’m really proud of that defensive effort and their effort in general, it’s just really heartbreaking for them, that’s a tough one to swallow for sure.”

Pentucket was led offensively by Currie (15 points) and Yacubacci (eight points) and Cleveland added six points and six rebounds. The Sachems (20-1) have now won 16 games in a row since suffering their only loss of the season against Masconomet back on Jan. 3, and Pentucket will now wrap up the regular season in the St. Mary’s Tournament, starting with Wilmington on Sunday at 2 p.m.