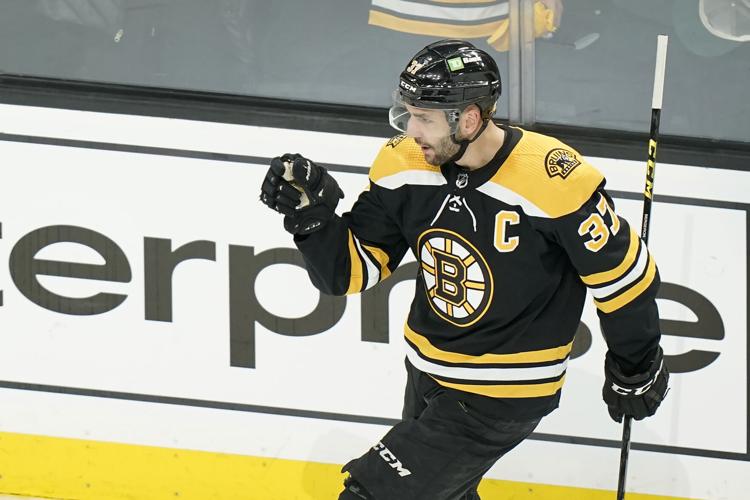 Bruins captain Patrice Bergeron will be back in the fold this season after the free agent signed a one-year, team-friendly deal to return for his 19th NHL season Monday. 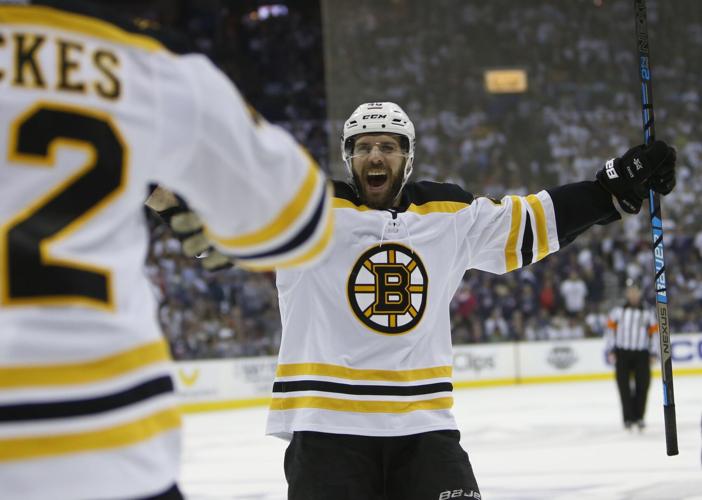 Boston Bruins’ David Krejci, of the Czech Republic, celebrates a goal against the Columbus Blue Jackets during the third period of Game 6 of an NHL hockey second-round playoff series Monday, May 6, 2019, in Columbus, Ohio.

Bruins captain Patrice Bergeron will be back in the fold this season after the free agent signed a one-year, team-friendly deal to return for his 19th NHL season Monday.

Boston Bruins’ David Krejci, of the Czech Republic, celebrates a goal against the Columbus Blue Jackets during the third period of Game 6 of an NHL hockey second-round playoff series Monday, May 6, 2019, in Columbus, Ohio.

When they hit the ice at Fenway Park on Monday, January 2 to take on the Pittsburgh Penguins in the 2023 Winter Classic, the Boston Bruins are hopeful that their top two lines will look something like this:

That’s four-and-a-half odd months away, and there’s a lot that can happen between the middle of summer and just after New Year’s. But after finally inking their free agent captain, Patrice Bergeron, and welcoming back fellow centerman David Krejci, Monday on similar one-year, team-friendly deals, the Bruins at least have an idea of how the middle of their forward corps will look.

Saying all the right things in an afternoon press conference about “an organization that means the world to me”, the 37-year-old Bergeron put pen to paper to ensure himself $2.5 million in salary for the 2022-23 season. He has the opportunity to earn the same amount in performance bonuses.

That’s literally middle-of-the-pack NHL coinage for someone who just won his record fifth Selke Trophy and will one day be enshrined in the Hockey Hall of Fame in Toronto, so clearly this wasn’t a monetary issue for Bergeron.

Saying “I still know I have something to give”, Bergeron acknowledged he wasn’t ready for what retirement brings just yet. He expects to be ready to go when training camp begins next month after undergoing left elbow surgery to replace a tendon in late spring, has already had multiple conversations with new head coach Jim Montgomery, and is “concentrating on this year” only, not looking past that.

The amount of zeroes at the end of his paycheck didn’t seem to be a deciding factor for the 36-year-old Krejci, either, as he chose to return to Boston — where he wore the Black-and-Gold for 15 seasons before opting to return home and skate for HC Olomouc in the Czech Extraliga last winter (20 goals, 46 points in 51 games) — and once again give the Bruins a second line center they know and and trust.

He and his fellow Czech David Pastrnak shared a symbiotic relationship when put on the same line during Krejci’s last season with the Bruins. Taylor Hall proved to be the elusive missing piece on the left side when he joined the team via trade in April 2021. With the top troika of Brad Marchand, Bergeron and Jake DeBrusk (25 goals last year) now back, that makes for two very good lines.

Should Montgomery choose to to so, he could always run out an all-Czech line of 25-year-old newcomer Pavel Zacha (also signed Monday to a one-year, $3.5 deal) on the left side with Krejci and Pastrnak, sliding Hall down to a third line role alongside center Charlie Coyle. But it’s much more likely to see a Zacha-Coyle-Craig Smith trio, then it’s mix-and-match for the final three spots: take your pick from Tomas Nosek, Trent Frederic, Oskar Steen, Marc McLaughlin, Fabian Lysell, Nick Foligno, Jack Studnicka, et al.

While Monday’s official signings — Bergeron acknowledged that he made up his mind to return before NHL free agency began on July 13 and told Sweeney of his intentions — were good news, it doesn’t solve all of the Bruins’ problems.

Getting Pastrnak signed long term is of paramount importance to the Bruins right now; he’s in the final year of his $6.67 per year contract he agreed to in September 2017, and it might take $10 million plus to re-up.

Franchise defenseman Charlie McAvoy (left shoulder), fellow blue liners Matt Grzelcyk (right shoulder) and Mike Reilly (right ankle), and Marchand (hip) all remain on the shelf following their own offseason surgeries and, with the possible exception of Reilly, won’t be ready when the puck drops for real again in October. The Bruins also went officially over the league’s salary cap $82.5 million by a few million dollars Monday, but will get around that by placing Marchand and/or McAvoy on LTIR (the long term injured reserve list) until they’re healthy and activated.

And that’s not even factoring in their top two pivots will be a combined 73 years old when the season starts; only Pittsburgh, with Sidney Crosby (35) and Evgeni Malkin (36), are close to that in the East. Among other teams in the East they’re chasing, Steven Stamkos and Brayden Point of the Lightning are a combined 58; so are Mika Zibanejad and Vincent Trocheck of the Rangers; Austin Matthews and John Tavares of the Maple Leafs together are 55; Aleksander Barkov and Sam Bennett of the Panthers add up to 52; and the Hurricanes’ top duo of Sebastian Aho and Jesperi Kotaniani are a mere 47 combined.

But that’s for another day. Bergeron and Krejci are back in the fold, the Bruins are better today than they were on Sunday, and it’s about a month to go until training camp.

“Thank you guys,” Bergeron wrapped up his Zoom conference with reporters Monday. “Have a good rest of your summer ... see you soon.”