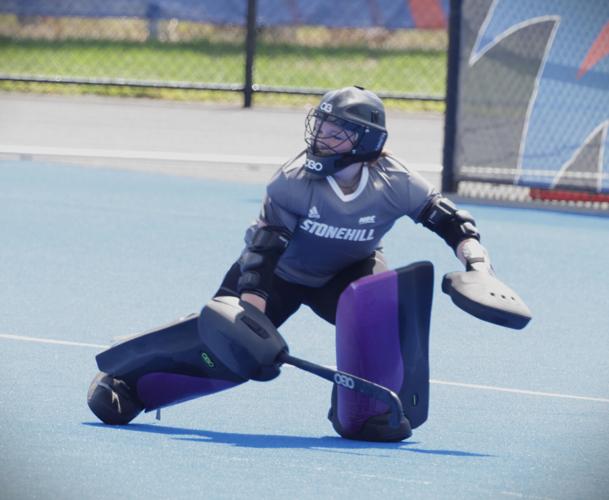 Former Pingree School captain and all-star Shannon Conte is the starting goalie for the Stonehill College field hockey team — one of two Division 1 sports she plays there. 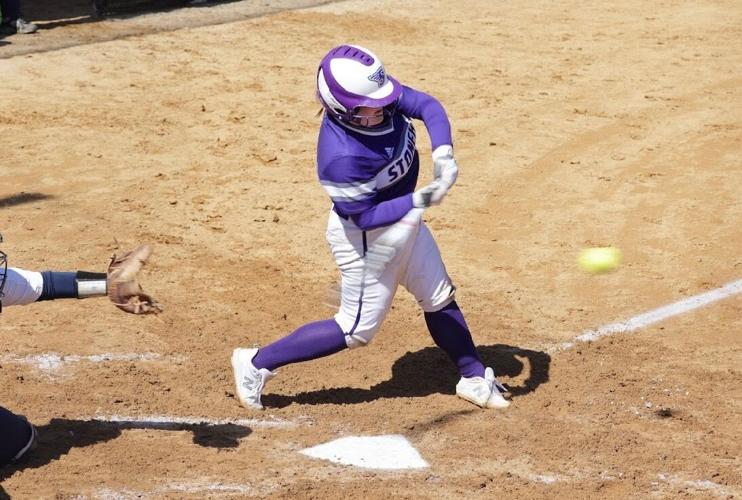 Shannon Conte plays two Division 1 sports at Stonehill College including softball, where she’s set to become the starting third baseball in the spring.

Former Pingree School captain and all-star Shannon Conte is the starting goalie for the Stonehill College field hockey team — one of two Division 1 sports she plays there.

Shannon Conte plays two Division 1 sports at Stonehill College including softball, where she’s set to become the starting third baseball in the spring.

It’s hard to play two sports in college at any level. But former Pingree softball and field hockey captain Shannon Conte is doing just that for Division 1 Stonehill.

She’s not just a member of those respective teams’ rosters, either. The sophomore is the starting goalie for the Skyhawks’ field hockey team and has grabbed the starting third baseball job for the softball program.

“My goal was to go to a Division 1 college and play either sport, but never thought I would be able to do both,” said Conte.

A two-time Highlanders’ captain in both sports and a three-time Salem News all-star, Conte admits that if asked today what her favorite sport is, she’d say field hockey. But if asked the same question in the spring, she’d probably go with softball.

“Shannon is such an outstanding person, student, and of course athlete,” noted Stonehill softball coach Ali Maloof. “We’re not only lucky to have her part of our program, but the field hockey program is lucky as well.

She was happy to receive offers from several colleges for either softball or field hockey, but couldn’t believe it when Stonehill — then in the process of transitioning from Division 2 to Division 1 athletic status — gave her an offer to play both.

“While it’s definitely challenging, it’s also an amazing time,” she said. “I do miss out on fall ball for softball and spring season for field hockey, but my coaches are so understanding.

“Sometimes I can’t believe how lucky I am to be able to continue to play both sports I love,” added the health science major. “There’s no question I have to work very hard to manage my time and get all my assignments in, but I find odd places to do my homework on the road.”

The Amesbury native has played both sports since she was a youngster. She began loving baseball after watching her brother Alec (who is 10 years older than her) play. Eventually, she switched to softball travel and AAU teams.

A short while later she fell in love with field hockey “almost as much as softball” she said. When she was around 12, Conte was watching her team’s goaltenders warming up and having so much fun that she told her coach that’s what she wanted to do.

Playing at the Division 1 level means the chance to travel more. Earlier this month, Conte and the Skyhawks field hockey team went to Missouri for a pair of games, falling to St. Louis University (2-1) before picking up their first win over Lindenwood University (4-3), in overtime.

“It was so nice to get a text from coach Maloof right after we won in overtime,” said Conte. “I can’t imagine myself being anywhere else but Stonehill. It’s a perfect place for me and I’ve made so many friends on both teams. “I couldn’t be happier.”

A year ago, said Conte, there were no seniors on the Stonehill softball team, so everyone returns for the 2023 team along with some talented freshmen additions. She said the entire team is excited about moving to play at the Division 1 level.

Primarily a catcher for most of her life, Conte is happy to have grabbed the third base spot when it became available. Another local player, Paige Wodarski from Danvers, made the switch to first base where the Skyhawks needed her there.

“Catching is a position I really love because I can control the game back there,’ said Conte. “It’s where you really use your IQ and mentally to take control. But I’ll play wherever they need me.”

“Shannon can accomplish anything she sets her mind to including this transition to Division 1 while being a two-sport student-athlete,” added Maloof. “She’s taking the challenge head on and proving it’s something that can be done while being an excellent student as well. She’s really paving the way for other student-athletes to do the same in the future.”