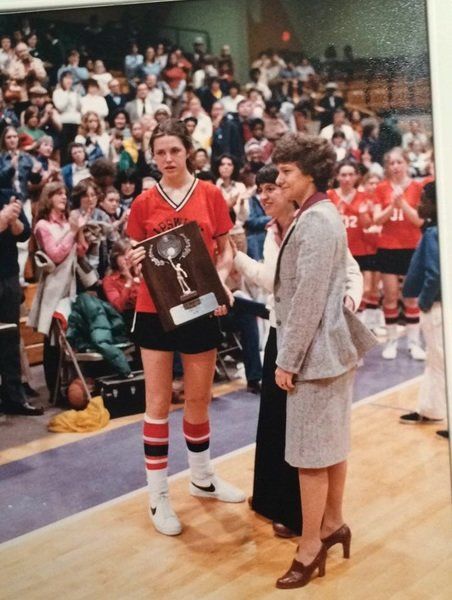 Jayne Benirowski and her girls basketball coach at Ipswich High, Kiki Papagiotis (center), pose with the state runner-up trophy in 1979 on the campus of Holy Cross in Worcester. 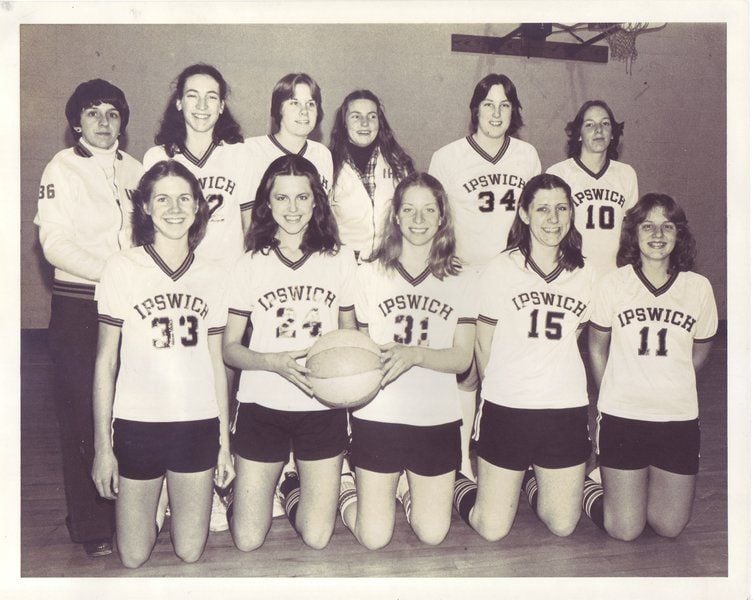 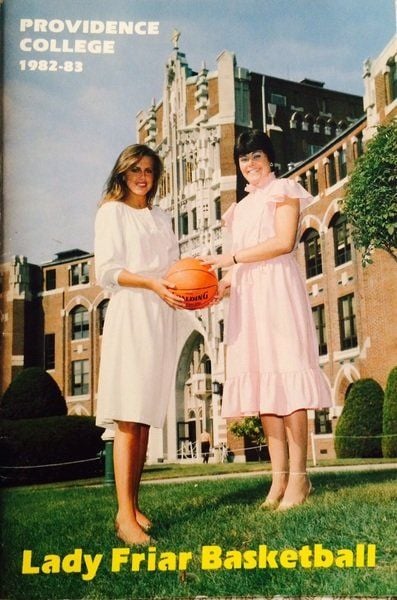 Jayne Benirowski (left) went on to captain the women’s basketball team at Providence College in 1982-83 along with teammate Kerry Phayre.  Courtesy photo 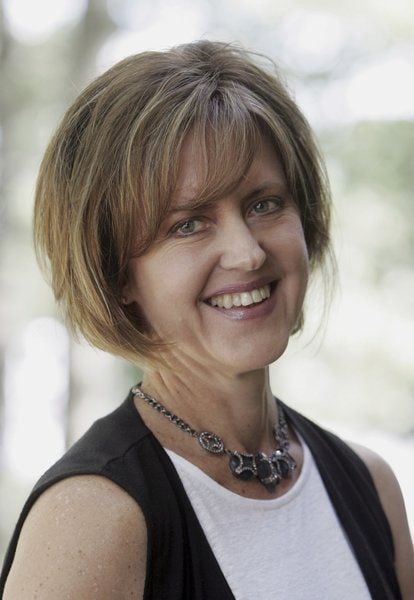 KEN YUSZKUS/Staff photo. Jayne (Benirowski) Canty, the former Ipswich High basketball great, says the lessons learned about leadership and commitment while in high school have carried throughout her life. 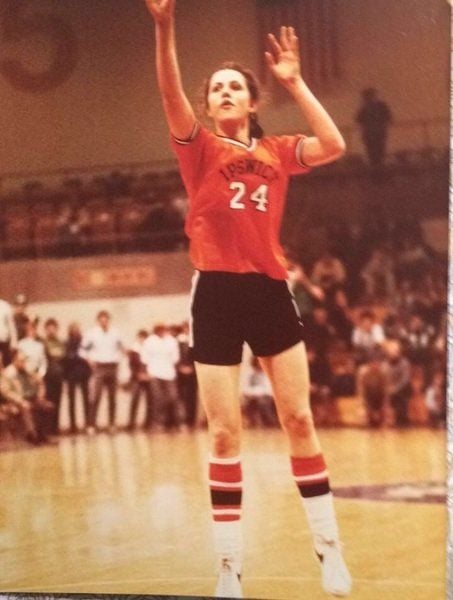 Jayne Benirowski was a force for the Ipswich High girls basketball program in the late 1970s. Her scoring, rebounding and all-around leadership qualities helped her land a scholarship to Division 1 Providence College, where she became a team captain for the Friars. Courtesy photo 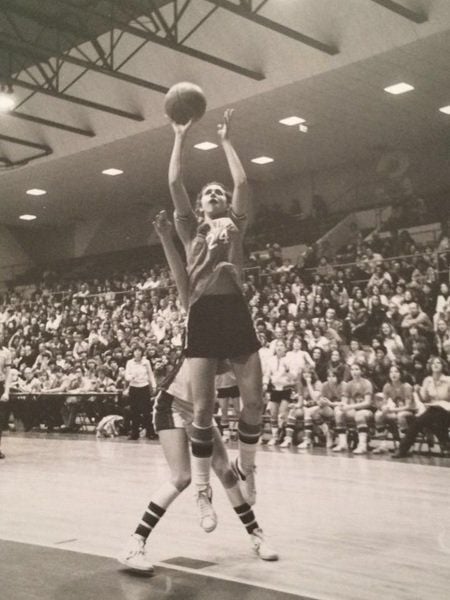 Be it scoring, rebounding, dishing off passes or playing lockdown defense, Jayne Benirowski could do it all for the Ipswich High girls basketball team in the late 1970s. Courtesy photo 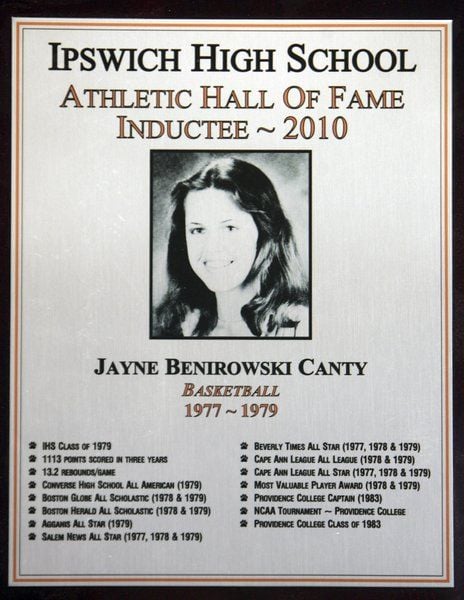 Jayne Benirowski and her girls basketball coach at Ipswich High, Kiki Papagiotis (center), pose with the state runner-up trophy in 1979 on the campus of Holy Cross in Worcester.

Jayne Benirowski (left) went on to captain the women’s basketball team at Providence College in 1982-83 along with teammate Kerry Phayre.  Courtesy photo

KEN YUSZKUS/Staff photo. Jayne (Benirowski) Canty, the former Ipswich High basketball great, says the lessons learned about leadership and commitment while in high school have carried throughout her life.

Jayne Benirowski was a force for the Ipswich High girls basketball program in the late 1970s. Her scoring, rebounding and all-around leadership qualities helped her land a scholarship to Division 1 Providence College, where she became a team captain for the Friars. Courtesy photo

Be it scoring, rebounding, dishing off passes or playing lockdown defense, Jayne Benirowski could do it all for the Ipswich High girls basketball team in the late 1970s. Courtesy photo

If you were an athlete growing up on the North Shore in the 1970s, Ipswich High School provided an environment for growth and development.

Jack Welch was one of several coaches at the small Cape Ann League school who worked diligently at tapping into kids’ potential. Welch regularly cranked out great football teams and some of his best players from that era, like Bubba Galanis and Bernie Adell, earned scholarships to Notre Dame.

The girls athletic programs at Ipswich also blossomed during that period, especially basketball under coach Kiki Papagiotis. She carved out a Hall of Fame career at the school by producing a 209-37 record, including a state championship in 1979-80.

Papagiotis did it with some extraordinary players, of course. Kathy Paganis, who was a field hockey All-American, was one of the keys for the dominant basketball team along with Ellen Galanis, who was the first Ipswich girl to net a college scholarship, ending up at Division 2 Bentley in Waltham. Both Paganis and Galanis graduated in 1977.

Then along came future Ipswich Hall of Famer Jayne Benirowski, who became Jayne Benirowski Canty after she was married. She was the baby of that group, if you will, a sophomore when Paganis and Galanis were seniors.

In a three-year span — she didn’t even play varsity as a freshman — Benirowski quickly turned herself into the best player in school history and one of the top players in the state, piling up 1,113 points and 169 blocked shots while averaging 13.2 rebounds. She led the Tigers to the state title game against Westwood as a senior in ‘79, an epic contest that Ipswich lost in triple overtime. Overall, Ipswich went 62-5 in her three seasons, including a 23-0 mark before the heartbreaker against Westwood.

Benirowski was 6 feet tall and had advanced skills. Her legacy went beyond points and rebounds and getting inducted into the IHS Hall of Fame in 2010. In addition, she was the groundbreaking player for Ipswich and the North Shore, getting a Division 1 scholarship to Providence College, where she became a captain and a contributor for a team that made the NCAA Tournament. The Friars compiled an 88-34 record in her four seasons, including 24-6 her senior year when she got to play in the first-ever women’s Big East Tournament.

“She is a legend in Ipswich to this day because of everything she did,” Papagiotis said of her star player, now a Danvers resident. “It was the golden era for our girls and Jayne led the way. It was a big deal then for her to get a scholarship to a school like Providence ... and it’s a big deal now. At the time, all the girls looked up to her, but the boys did too. That was significant.

“I still remember that final (state title) game her senior year. We’re at Holy Cross and we’re walking off the floor after the third overtime and Patrick Ewing (already a national figure at Cambridge Rindge & Latin before he went on to Georgetown and then a spectacular NBA career) is cheering us on and telling us what a great job we did. I think it was a couple of days later that I got a call from Providence about Jayne. I might’ve been a little flip with them. It was like, ‘Where you have been all this time?’ She can play (at the higher level).”

‘The right way, right away’

You had to understand the times, as Benirowski Canty would say now. This was pre-Internet, pre-YouTube, pre-AAU, when there wasn’t saturation coverage of high school standouts and college prospects. College coaches would seek urban talent and were a little leery about reaching out to small schools like Ipswich, no matter how great the player was.

“I thought I was going to go to (Division 3) Colby College in Maine,” said Benirowski Canty. “It was a little school, but the coach, Gene Laurenzi, liked me and they had a strong Spanish language program, which was something I wanted. Providence came in at the last minute, basically. I really didn’t decide on Providence until later in the spring.

“It was different back then. They (Providence) were sending me letters, but AAU (exposure)? No, there was none of that. We played summer league in Beverly and that was it. Providence got into it very late. They liked my height and rebounding and (that) I could put points on the board.”

Benirowski Canty was sensitive about her height, calling herself “5-foot-12” instead of six feet, and the road to Providence had a tentative start. She didn’t play varsity her freshman year at Ipswich because she was largely unfamiliar with the game. With the help of her father Chick, who had played semi-pro ball with the old Polish Falcons, and with Papagiotis’ encouragement, Benirowski Canty began to turn herself into a scoring threat and rebounder as a sophomore. By the time she was a senior, she was a complete player and a legit college prospect.

“I was a tomboy and played kickball growing up,” recalled Benirowski Canty. “My dad knew the old-fashioned (6-on-6) girls’ game. We didn’t know what the rules were for (modern) basketball. I was very tall for a young girl and Kiki had her eye on me, but I didn’t even know what offense was. I was unschooled and had to find out about every part of the game.

“I learned basketball in the backyard with my dad. I think when you’re doing that as an older player, you learn the game the right way. I had no time to develop bad habits. I learned the right way, right away. And then when I played for Kiki, she gave you tough love. It was constructive criticism that you could apply to your game. That helped me specifically later in my career and got me ready for Providence.”

A college scholarship wasn’t the priority as she progressed at Ipswich and started making all-star teams at the local and state level. Papagiotis had a perpetual powerhouse at Ipswich and Benirowski Canty, who was the team’s sole captain as a senior, was caught up in the winning and the team camaraderie.

“Jayne could’ve averaged 20-30 points, but she was just so unselfish,” said Papagiotis. “She wasn’t about individual stats. She cared about winning and that was the deal. She would pass up good shots in order to get the ball to her teammates. But she became such a great all-around player for us that she eventually got noticed.

“The college teams liked her because she was an extraordinary passer and she had height and an outside shot. She could go outside and draw (interior) defenders. College coaches love that stuff.”

After piling up big numbers in any game for the Tigers, Benirowski Canty would have to peruse the newspapers the next day to see exactly what she did. She remained humble that way. If Ipswich got publicity for its winning streaks and went deep into the postseason tournaments, it was exhilarating for her.

“We got considerable press because we won a lot, and playing for Kiki was unbelievable, truly,” said Benirowski Canty, now 53. “It was good for our town and good for girls basketball. Even at Providence, we didn’t get the fan support that we had at Ipswich. To take Ipswich where we did, reaching the state championship game, I would want that for my kids. I would live it all over again in a flash.”

Even today, Benirowski Canty would deny that she was a groundbreaker at Ipswich, deny that she stirred more interest in the sport and helped pave the way for other girls to be recognized by colleges both large and small if they were good enough.

“Yes, we’d see girls dribbling the ball around town,” said Benirowski-Canty. “But that was about the reputation of the Ipswich program, the one that Kiki started.

“It was a true gift to go on and play in college, but playing for Kiki was truly great. She always has a place in my heart.”

Some of Jayne Benirowski Canty’s career highlights on the basketball court:

Pioneering Spirit: How we went about choosing this year's Summer Series

It was time to give the ladies their due.