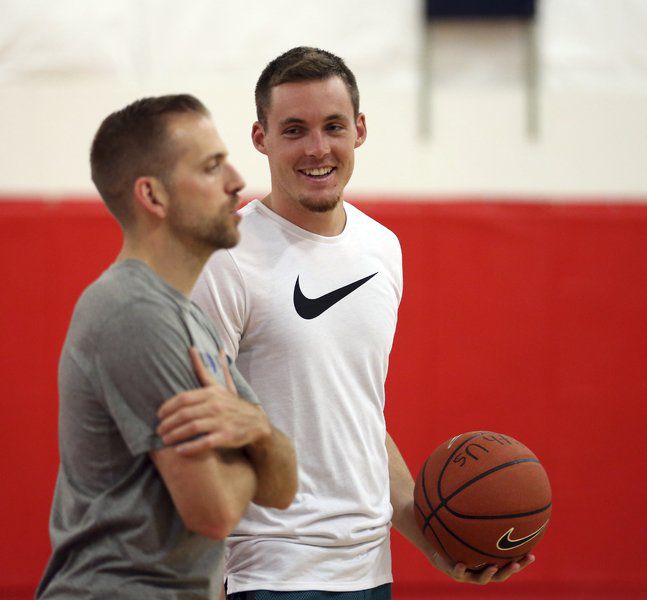 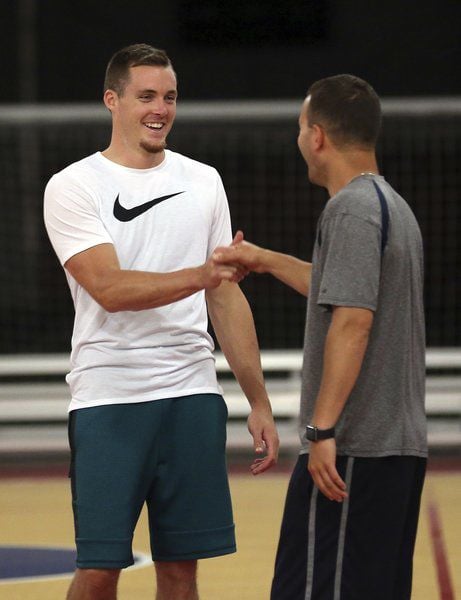 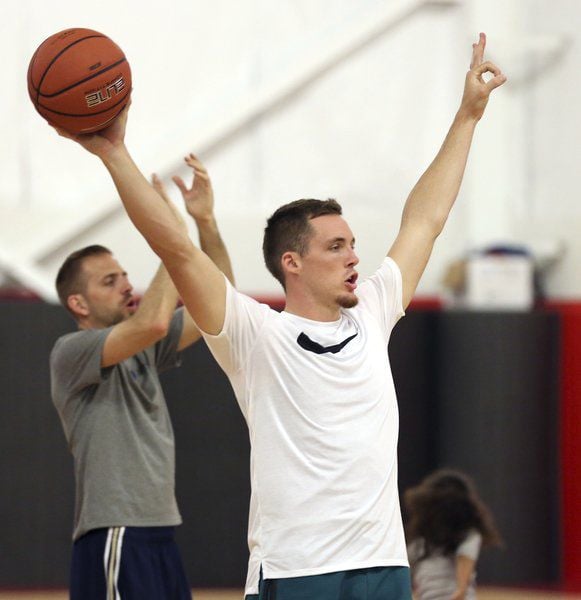 DAVID LE/Staff photo. Portland Trail Blazer guard Pat Connaughton reacts after one of his campers hit a jumper during a pickup game at the end of camp on Tuesday afternoon. 6/28/16. 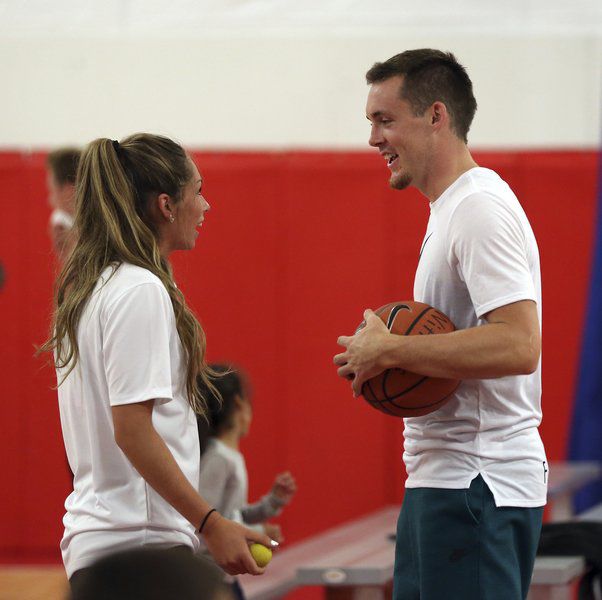 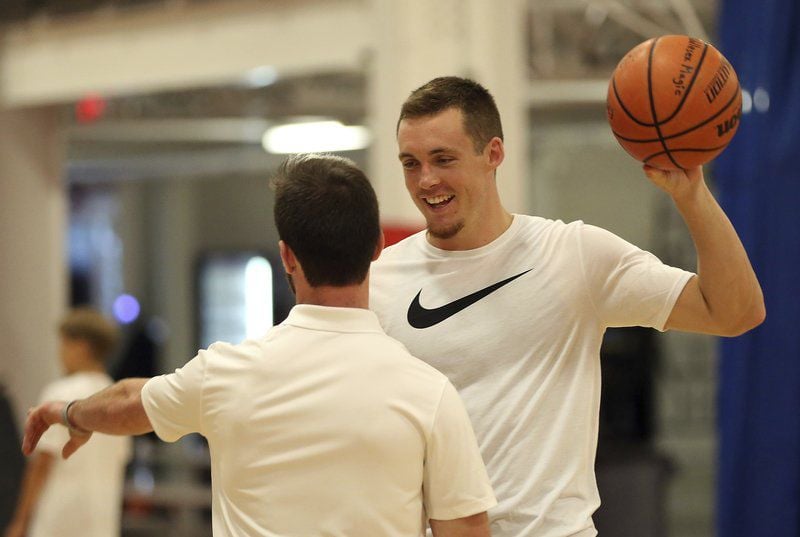 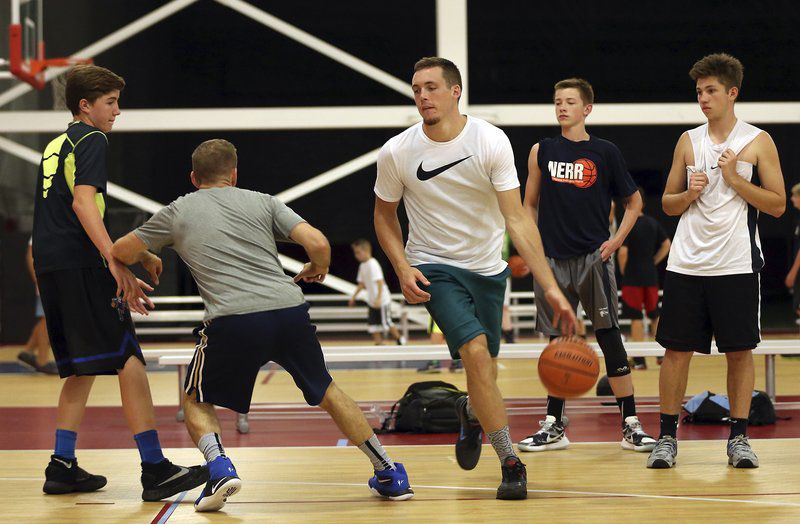 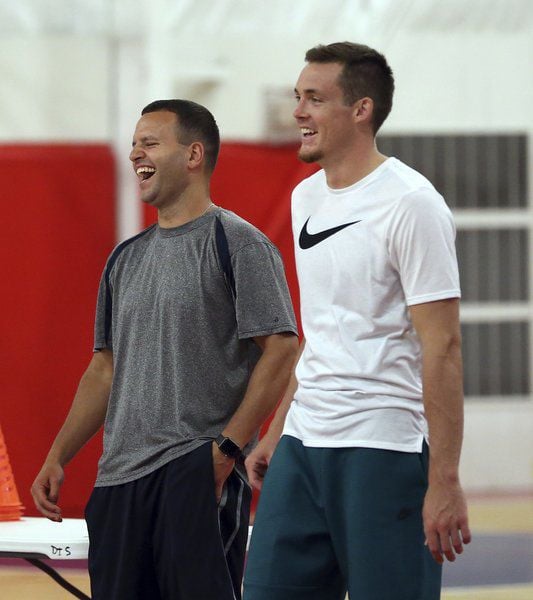 DAVID LE/Staff photo. Portland Trail Blazer guard Pat Connaughton reacts after one of his campers hit a jumper during a pickup game at the end of camp on Tuesday afternoon. 6/28/16.

Sure, he was always athletically gifted which gave him an upper hand. But you don't just climb to the professional ranks without two things: an enormous work ethic and the guidance from others.

Connaughton knows that all too well and he's at a point in his life and career where he wants to give back to those who supported him throughout the years. And in turn, allow kids of this generation to experience that same commodity.

That is what prompted the 23-year-old shooting guard to create the charitable foundation "With Us", with the goal of helping kids learn and grow as young students and athletes.

"The 'With Us' thing kind of morphed from the name itself, because when you become involved with us, you are a part of us — kind of like this big family type atmosphere," said Connaughton. "It really sparked from all these people that have supported me throughout my life. So I wanted to include them and all the support they've given me and collectively, with their help, use it to give back to the people that need it most."

Within the foundation, Connaughton —  along with Middlesex Magic Basketball Club Director and longtime friend Michael Crotty Jr., as well as Certified Strength and Conditioning Specialist Erik Kaloyanides — have worked together to provide financial assistance to a variety of organizations.

Whether the funding goes to personal development, education or medical research, the goal is always the same: Open up opportunities and make a difference.

"Those three things can really have an affect on the world and an affect on the next generation," said Connaughton. "If one, two, three, four, 10, 12 ... however many kids come through us, whether it's from us individually or from the causes we support or some of the other foundations we support, if they're able to say 'Wow, this really catapulted me into something very meaningful for my life', then we've done our job."

Although it's only just getting started, "With Us" is already making significant strides. This past week, Connaughton returned home to begin his first summer basketball camp — something he hopes can become an annual event.

The Win "With Us" camp, which opened up at Danvers Indoor Sports on Monday and continues through Thursday, gives kids of all ages the opportunity to meet Pat, learn from him and be a part of something special. Along with the many drills and scrimmages, campers also got the chance to win prizes such as autographed sneakers from Connaughton's Trail Blazer teammates (Damian Lillard, Noah Vonleh and Ed Davis to name a few) by hitting designated shots or beating Pat and former Lynn English standout Darell Byrd in two-on-two.

Of course, all proceeds from the camp went directly to the foundation.

"A ton of NBA guys do camps and a ton of NBA guys make quite a bit of money off camps. Thousands and thousands of dollars," said Connaughton. "All of (the money) could go to me. It could be something I put in my pocket and help myself with other business ventures, but it's all gonna go towards the foundation and that's something that I wanna donate myself. It's something that I think will not only help the foundation get off the ground, but show the people how truly invested I am."

Connaughton has certainly enjoyed his time working with the kids and giving them that once-in-a-lifetime experience. That was true of his former Notre Dame teammate and Boston Celtic-bound Demetrius Jackson, who joined another Irish teammate Zach Auguste at Wednesday's session.

"It was really awesome," Jackson said following day three of the camp. "It's just a lot of fun, I love doing it and I love working with young kids and just spending time with them. When I was younger we didn't have these opportunities so I wanna be able to kind of give back what I can for now."

With year one of the camp wrapping up this evening, Connaughton and company look ahead to their next big event: a charity golf tournament to be held at Oakley Country Club in Watertown on August 15.

Growing for the future -- and beyond

While Connaughton's foundation stems from his own experiences and road to success from Arlington to SJP and Notre Dame, he has aspirations for it to go bigger than just the community got him there.