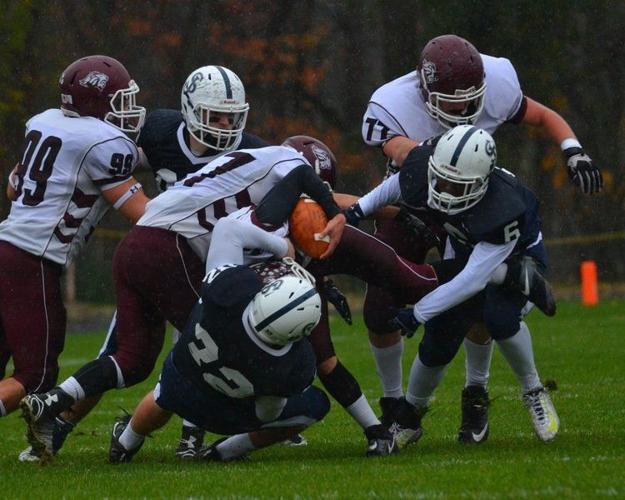 DANVERS — It takes more than rain and wind to slow the St. John's Prep football team down.

The Eagles came out and dominated play from start to finish Saturday morning in a 28-0 Division 1 Northeast playoff quarterfinal victory over Chelmsford.

The heavy rains that got worse as the game wore on didn't seem to bother the Eagles' running game. Senior Cody Harwood gamed 194 yards on nine carries to go over the 1,000-mark for the season and scored three times. Junior Dillon Preston took over in the second half and finished the game with 100 yards on a dozen carries.

"My offensive line — Carnevale, Dan Dewing, Neal Farmer, Duncan Kelly and Rafy (Rafael) Rivera — did a great job blocking and opening up big holes all game," said Preston. "They deserve all the credit."

St. John's Prep head coach Brian St. Pierre said it was a tough day to play, but something his team was well-prepared for.

"It's a mixed bag in conditions like this, but we practice in this kind of weather and proved we can play in any kind of weather," said St. Pierre. "We're very balanced and mix up the pass and run.

"Our offensive line was unbelievable opening up holes for our backs. They did a great job all game. We were physical and played hard."

St. John's got on the board midway through the first quarter when Oliver Eberth threw a 35-yard touchdown strike to senior wideout Owen Rockett. Justin Foley, who was perfect on extra points attempted, booted the ball through the uprights to make it 7-0.

The Prep defense forced a three-and-out by Chelmsford, and Jack Campsmith's ensuing punt was nearly blocked. It went only nine yards, giving the Prep excellent field position at the Lions' 29-yard line. The hosts took advantage as Harwood carried five times on the drive, cashing in from a yard out to make it 14-0.

Harwood, the hard-running senior who now has 1,035 yards rushing this fall, broke the game open with a 92-yard TD run. He bounced off would-be tacklers and turning on the jets to put his team in command with 6:44 remaining in the half.

"That long run was huge for us," said St. Pierre. "I loved the way our defense played, too. They set us up in great field position all game. Right now they're playing the best they have all year ... and it comes at a great time."

Campsmith, Chelmsford's quarterback, was sacked five times by Eagles' defenders, including Hunter Brown, James Carnevale, Jake Burt, Sean Fallon and A.J. Carrigan. Campsmith and running back Nick Philippon ran 28 times for a combined minus-2 yards. Philippon was caught in the backfield by Alex Cormier and Jack Lambert for losses. Campsmith didn't have much luck in the air, either, completing only 4 of 15 attempts for 25 yards.

It took the Eagles only two plays on its opening drive of the third quarter to get on the board again when Harwood raced 59 yards untouched to paydirt.

Chelmsford couldn't get anything going offensively and never got in the red zone.