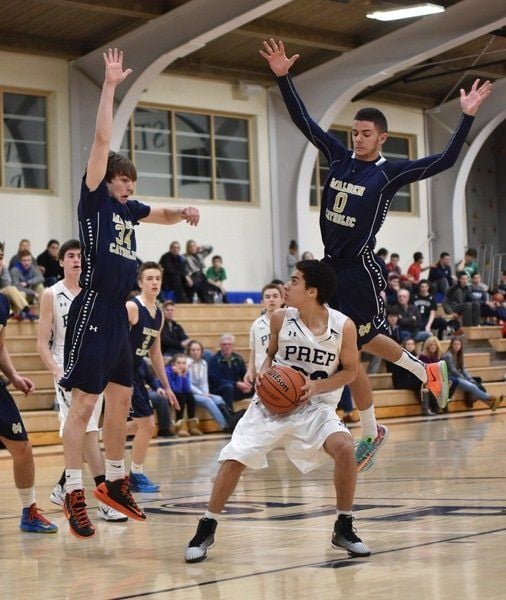 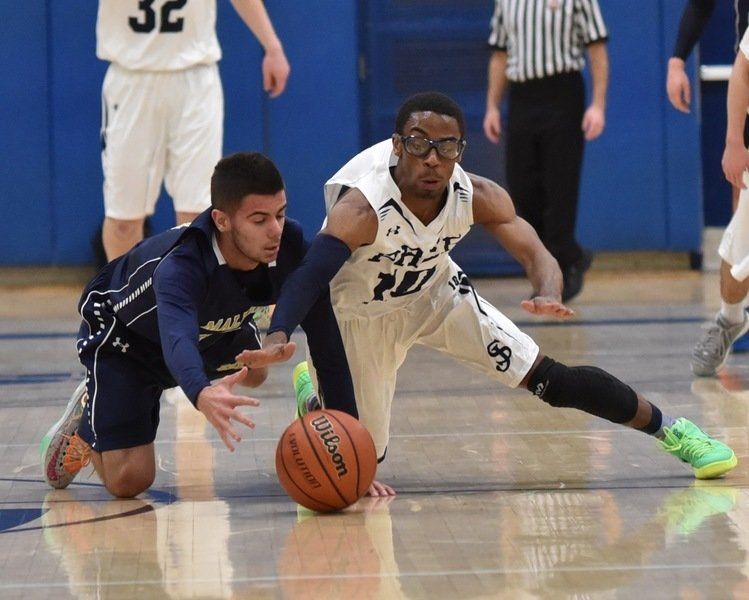 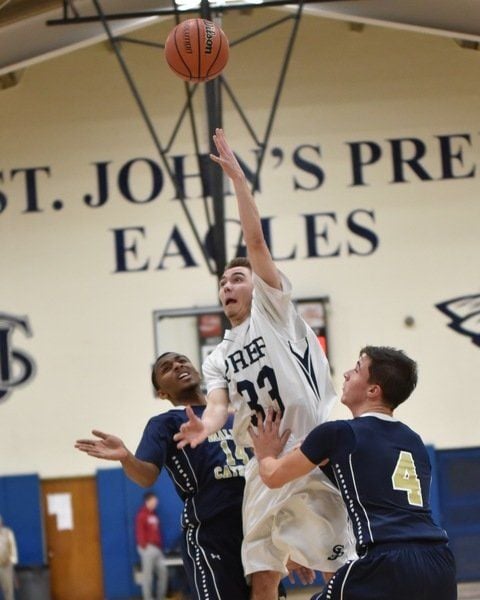 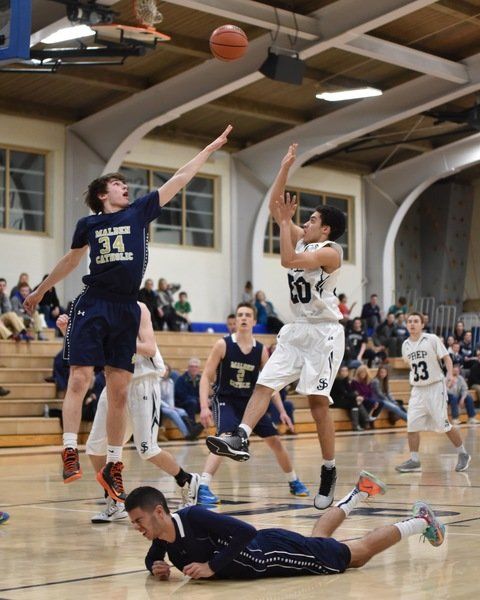 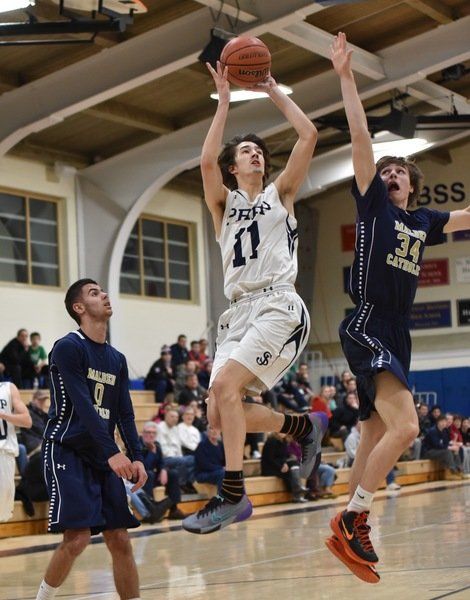 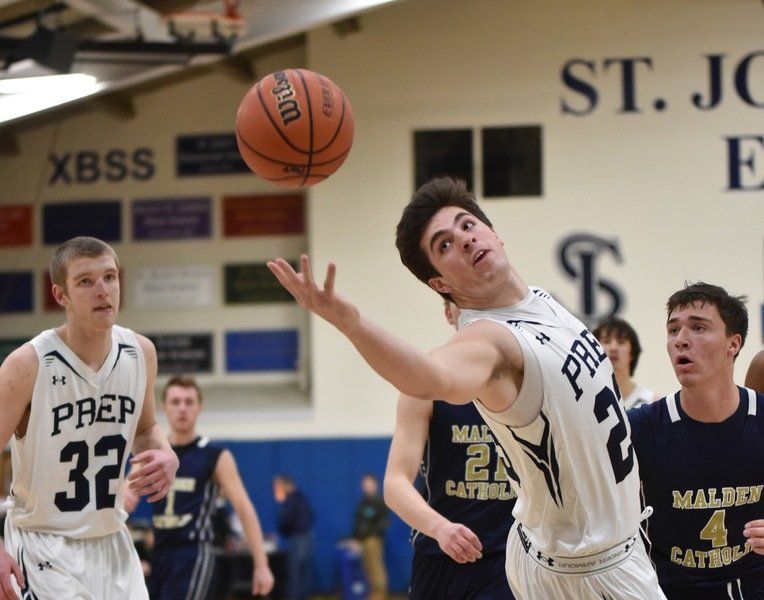 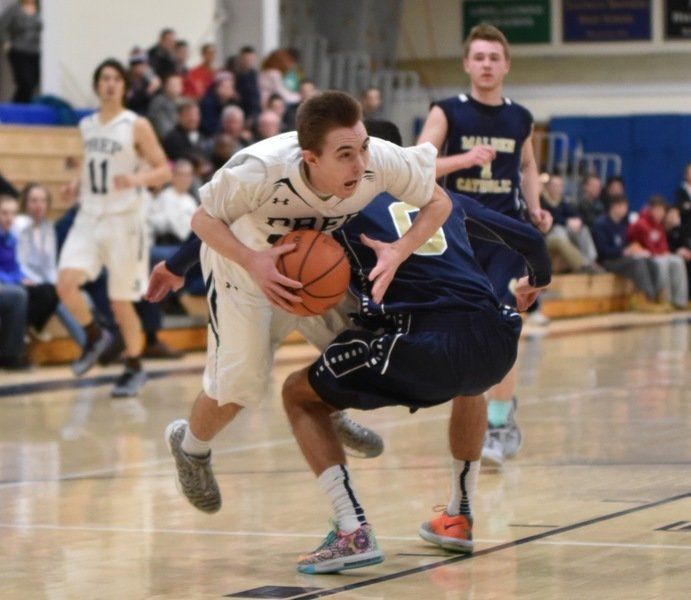 Junior guard Alec Buresh of St. John's Prep goes through his defender on his way to the basket during the Eagles' win over Malden Catholic Wednesday night. Rose Raymond photo.

Junior guard Alec Buresh of St. John's Prep goes through his defender on his way to the basket during the Eagles' win over Malden Catholic Wednesday night. Rose Raymond photo.

The Lancers made the Eagles work on every possession and contested every shot. But you can’t play defense on foul shots, and St. John’s made 13 more free throws than their guests and pulled away in the second half for a 70-57 victory.

It’s not that the Eagles had more opportunities from the line; both teams took the same amount of free throws.

“Ever since I’ve been here we’ve actually been a pretty good foul shooting team,” St. John’s Prep coach John Dullea said. “Typically we end most practices shooting foul shots in a game atmosphere, tired at the end. We have a lot of good shooters that are naturally good foul shooters. I’m guessing that was the difference in point differential in the end.”

St. John’s made 20-of-23 free throws while Malden Catholic suffered through a 7-for-23 shooting performance from the line.

“It’s something we work on every day, but for some reason we get into games and it hurts us,” Malden Catholic (8-4) coach Jim McCune said. “We get to the foul line plenty, so in some ways they’re turnovers. Certainly in a game like today, when every point is important, they really stick out. That’s been a problem all year.”

The Eagles, who improved to 10-3 and qualified for the tournament with the win, gradually pulled away in the second half.

Jake Burt, who is typically a physical role player for St. John’s, scored all eight of his points after intermission. He had two hoops to start an 8-0 run that gave the Eagles a 46-39 lead in the third quarter. Then, early in the fourth quarter, he had back-to-back hoops to give St. John’s its first double-digit lead, 58-47 with 4:38 to go.

“He’s usually the guy the other team doesn’t cover,” Dullea admitted. “He made them pay tonight. He had some great takes to the basket. When he’s a threat offensively, just even posing a threat, it makes our other guys so much better because they can’t cheat off him.”

St. John’s only had one field goal in the final four minutes (a short turnaround jumper by Harry O’Neil), but connected on each of their 10 free throws during that span. Tyson Johnson and Ben Judson each made four freebies as the Prep put the Lancers away at the line.

“That was a pretty good game tonight. They’re a little too strong for us inside and we didn’t really rebound the ball too well in the second half. They got too many second and third shots,” McCune said.

In the first half, St. John’s didn’t get any separation from their guests until a 7-1 run late in the second quarter. A Judson jumper, an O’Neil layup, a Tyson Johnson triple and two free throws from Brett McNiff turned a two-point deficit into a 34-28 lead. The six-point advantage was the biggest lead either team held in the first half.

Davis was sharp in the first half, especially early in the second quarter when he scored nine of his 11 first half points in a 3:20 span to start the half.

“If you look back at the games we’ve played them, it usually is this way. It’s never easy, physical, usually an ugly game,” Dullea said. “That’s what it was and in the second half I think we were able to pick it up on defense. We made it difficult for them to score. When we don’t give up second chance points we’re a pretty good team. It’s just that sometimes we give up too many offensive rebounds. I think we executed on both ends of the floor the way we needed to.”