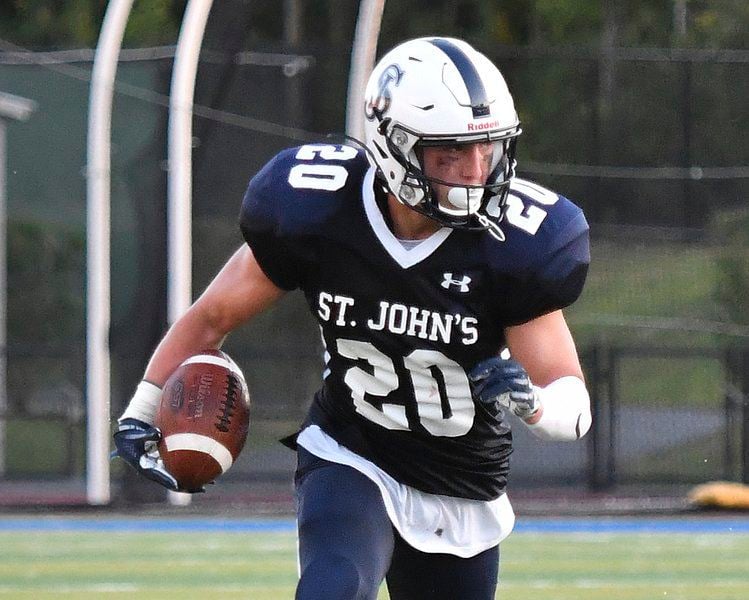 Rose Raymond photoMatt Duchemin, who starred at wide receiver and cornerback for St. John’s Prep, will continue his football career at Holy Cross. 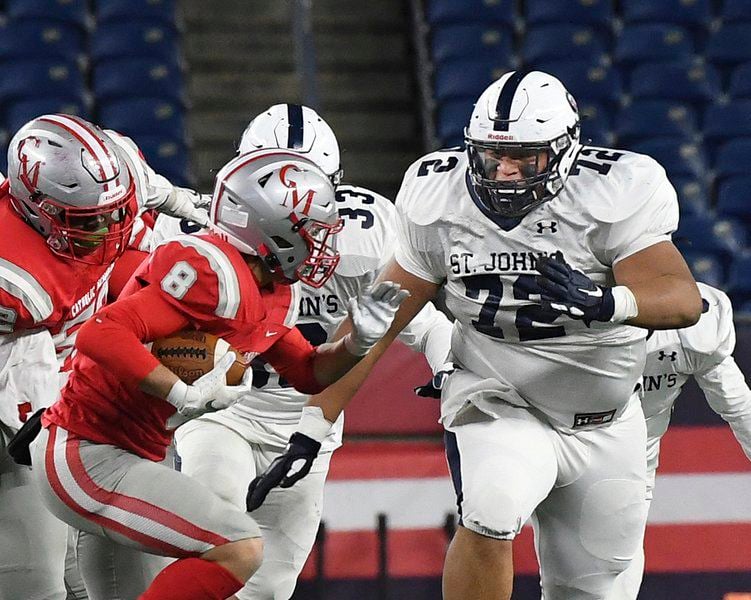 Rose Raymond photoMatt Duchemin, who starred at wide receiver and cornerback for St. John’s Prep, will continue his football career at Holy Cross.

Matt Duchemin and Cooper Smith, two captains for the Super Bowl winning St. John’s Prep football team who played big roles for a squad that captured its second straight Division 1 state title this past fall, have committed to colleges to continue their football careers.

Smith was well acquainted with the University of New Hampshire after spending summers at football camps there. So when he made an official visit to Durham this past weekend, the 6-foot-3, 315-pound guard/defensive tackle was ready to commit.

Duchemin, a 6-foot-1, 185-pound wide receiver/cornerback, decided that The College of Holy Cross was where he wanted to spend the next four years.

So in a matter of hours, the two Salem News all-stars finalized their plans.

“I had also been considering Hobart and Trinity, but I really loved everything about UNH,” said Smith, who lives in Portsmouth, N.H. “I knew that’s where I wanted to spend the next four years. I had been thinking about playing D-1 ball and decided to go for it.

“I’ll be on the offensive line somewhere; anywhere is fine with me. I like offense better than defense.”

Duchemin, owner of a 3.8 grade point average, was equally effusive in his praise about Holy Cross.

“It’s always been the school for me ever since I attended football camp the summer before my junior year,” said Duchemin, who is thinking about majoring in biology. “I made my official visit there last weekend and knew I was ready to commit. Colgate was my runner-up and both are amazing schools, but Holy Cross is much closer, which means my family can go to more games.”

Smith began playing Flag Football in Portsmouth when he was in the third grade. He has a 3.6 GPA and plans to major in accounting and finance.

He used to play basketball, but gave it up to concentrate solely on football once he realized that’s what he wanted to do in college.

“Cooper had a great career with us as a three-year starter, and even played some as a freshman,” said St. John’s Prep coach Brian St. Pierre. “He’s been a mainstay on the offensive line for so long and never missed a game. At the next level he’ll be a guard; he’s big enough to fill that role.

“Cooper comes from a great family, and he’s going to play close enough to home they’ll be able to watch his games. He had a lot of other schools looking at him in D-2 and 3, but he wanted 1AA and UNH was his first choice. He’s the first player I’ve had commit to UNH. He always was clutch in the big games, having one of his best on both sides of the ball in the Super Bowl win over Catholic Memorial and another monster performance in the Division 1 North final at Central Catholic.”

Smith said he he new all the UNH coaches from the camps he went to every year and felt comfortable there.

“They want me to cut my weight down a bit and get stronger, especially upper body for the college game,” said Smith. “I’m lifting in Woburn at Athletic Evolution to get ready, and I’ll start lifting with the UNH team on June 1.”

Duchemin saved his best performance of the season for last with a terrific game at Gillette Stadium in the Super Bowl, hauling in five passes for 119 yards and a touchdown. He also picked off two Catholic Memorial passes and was named Prep MVP.

He had a team high 35 catches for 852 yards and eight TDs. During the regular season his best offensive game was against CM with 172 yards including an 88-yard touchdown grab.

Graduation had claimed all the top receivers from the 2019 Super Bowl winning team, but Duchemin quickly stepped up to fill the void and became quarterback Matt Crowley’s favorite target.

“Matt was Mr. Patriot League and had offers from just about all the teams in that league,” said St. Pierre. “He’s a quiet kid who kept everything close to the vest, but whenever he talked about Holy Cross his eyes lit up. Both Matt and Cooper has pretty impressive resumes, Catholic Conference all-stars and two-time state champs.”

Duchemin is the first St. John’s player to go to Holy Cross for football since running back George Sessoms, a 2010 Prep graduate.

“I’ll start off on defense and will probably stay there,” the Haverhill resident said. “That’s fine with me because I prefer defense, and I’ll be on special teams as well.”