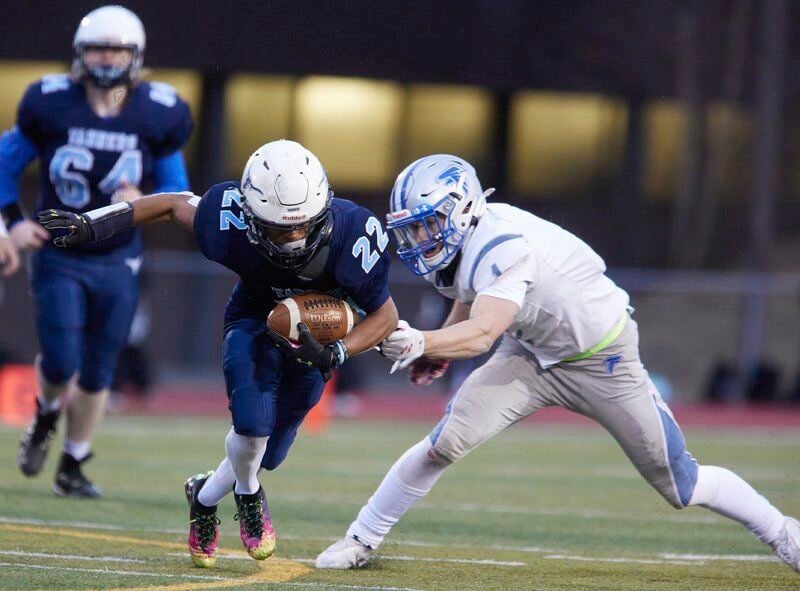 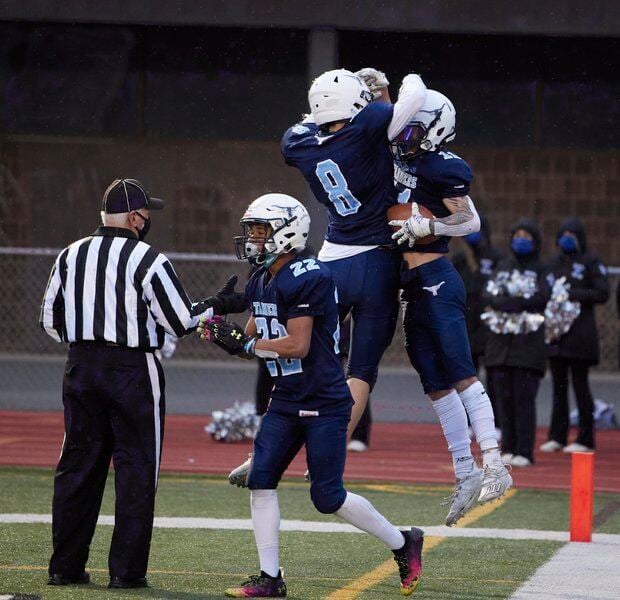 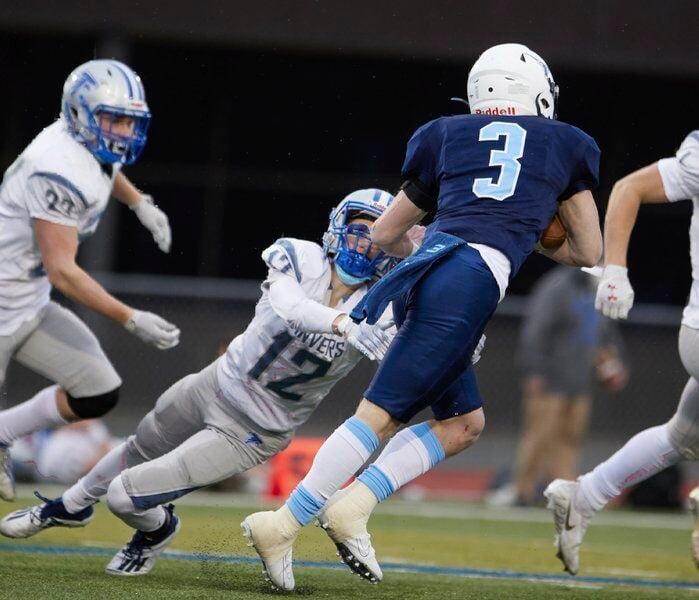 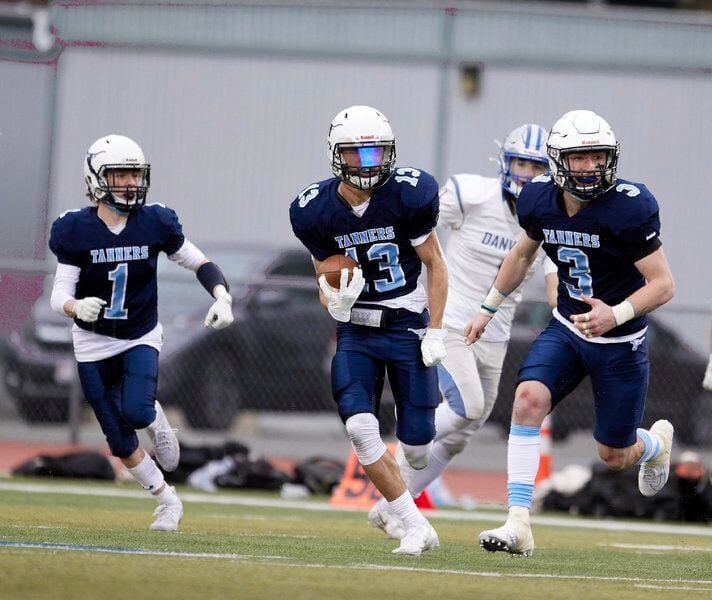 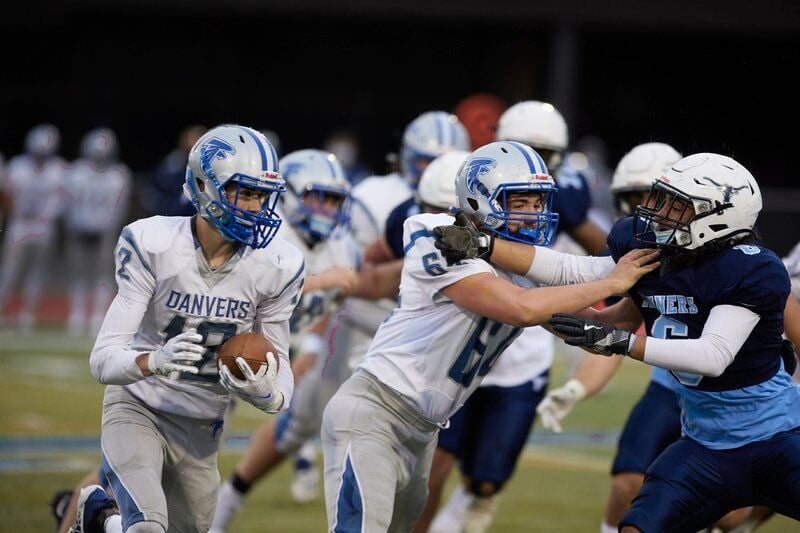 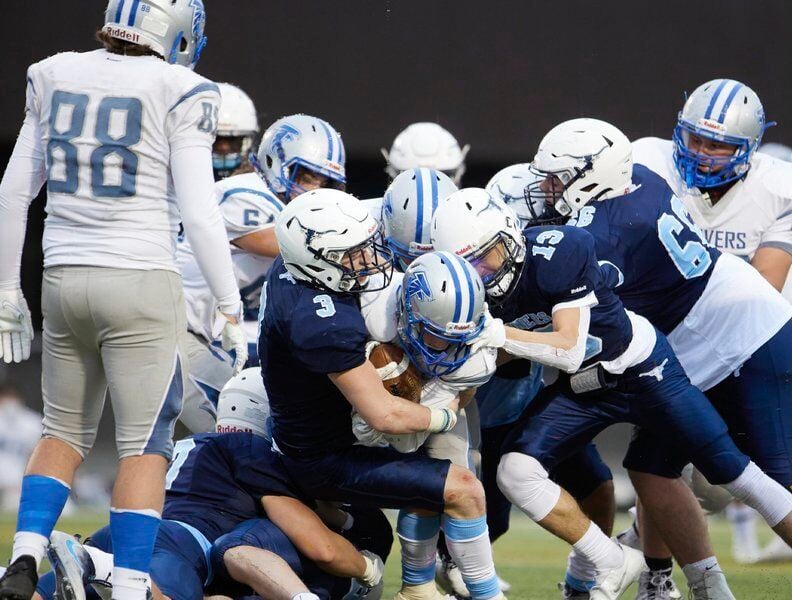 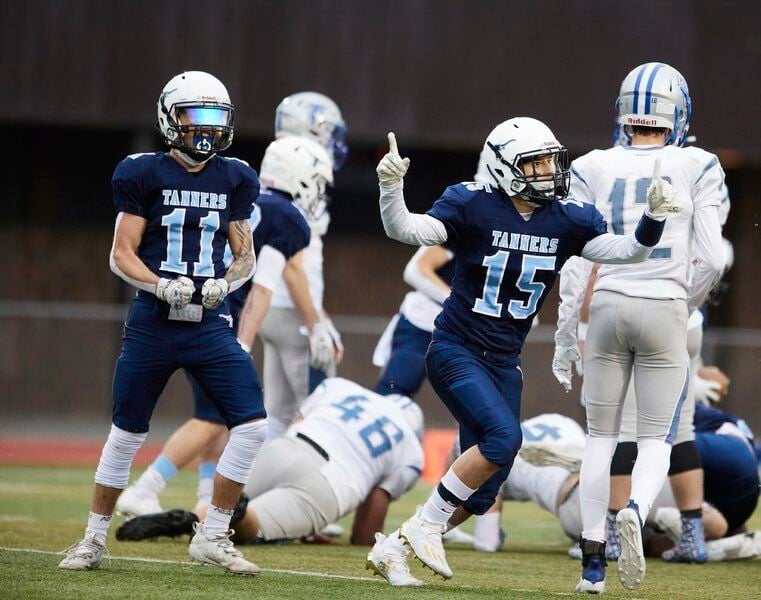 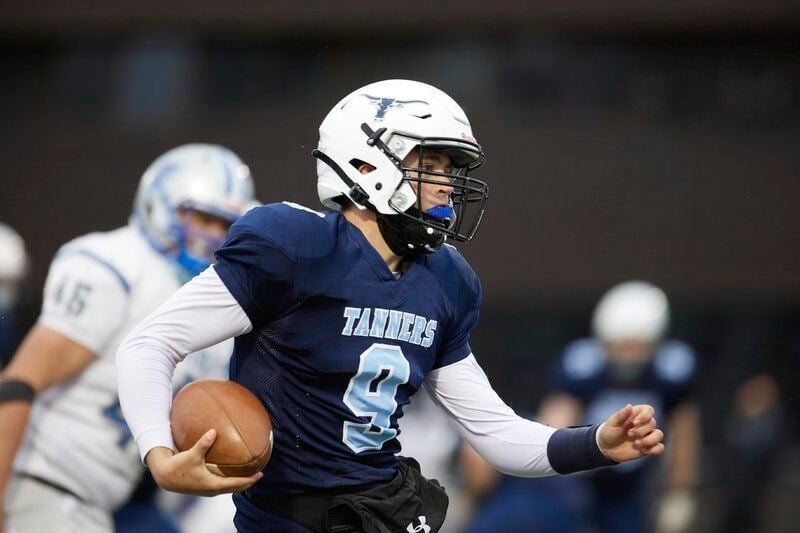 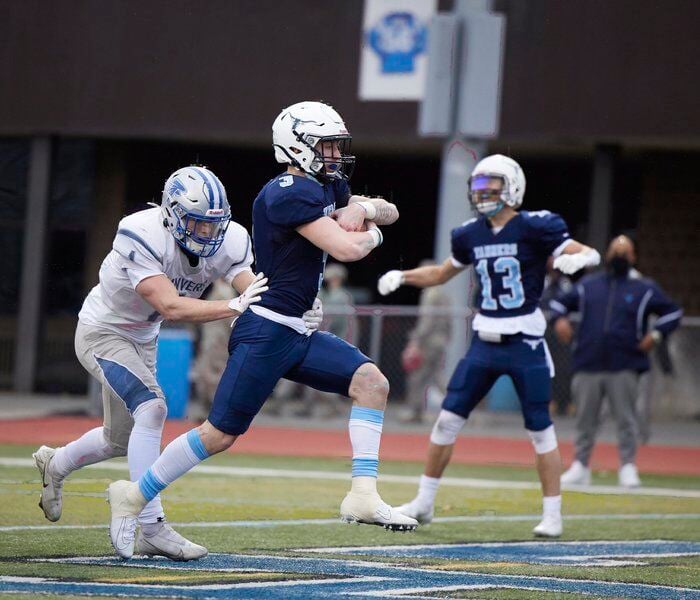 Jared Charney/Salem News photosPeabody’s Kyle Maglione cruises into the endzone for one of his TDs in his team’s 24-7 win over Danvers. 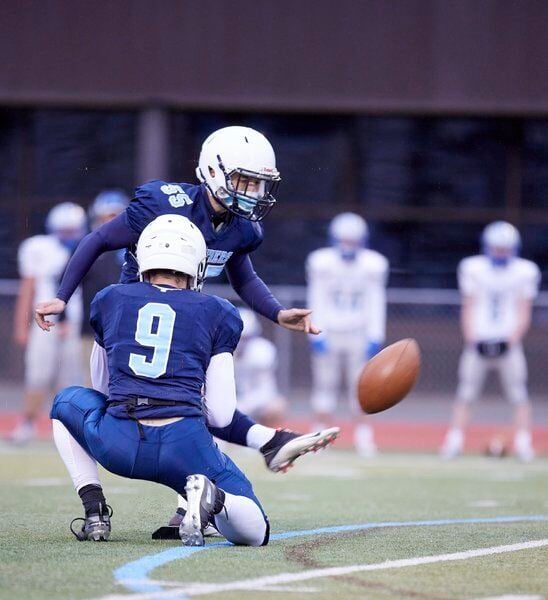 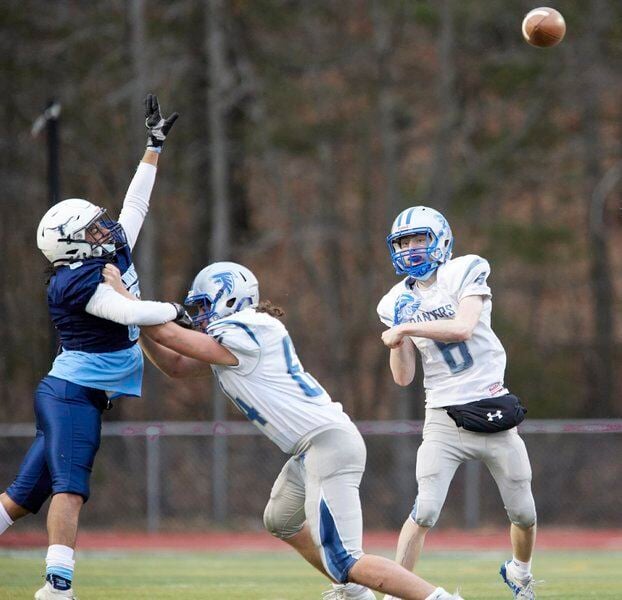 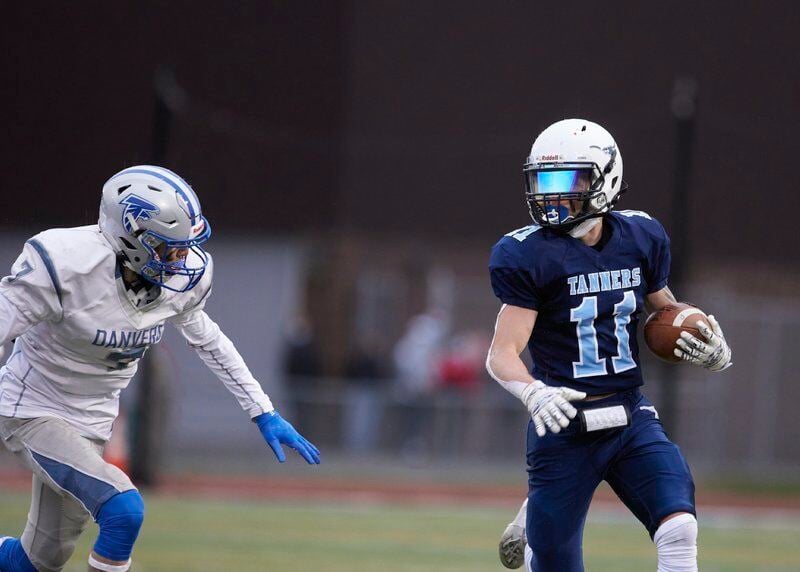 Jared Charney/Salem News photosPeabody’s Kyle Maglione cruises into the endzone for one of his TDs in his team’s 24-7 win over Danvers.

PEABODY — Words couldn’t describe how Peabody High captain Kyle Maglione felt about having to miss the first two games of this shortened Fall 2 football season. Thursday night in his return from injury, Maglione let his actions show, quite loudly, how great it felt to be back.

Behind two touchdowns, an interception and two sacks from Maglione, Peabody knocked off Danvers High, 24-7, on a chilly and sometimes snowy night at Coley Lee Field. It was the first win over the Falcons for the Tanners’ 19 seniors who celebrated their Senior Night by improving to 2-1.

“Honestly it feels amazing. It’s a great feeling to be back on the field with my brothers after missing those first two games,” said Maglione.

Turnovers ruled the day for Peabody, which saw senior Brandon Pszenny help deliver a 10-0 lead after only six minutes of action.

The speedy Pszenny returned the opening kick to the 25-yard line, setting up senior Joe Swanton’s 26-yard field goal. He then returned an interception down to the Danvers 11-yard line to allow for the first of two Maglione rushing scores.

“We’re maturing as a team,” said Peabody head coach Mark Bettencourt, whose team hadn’t topped Danvers since 2015. “We played well in all three phases of the game and we didn’t make the kind of mistakes that could’ve given Danvers confidence or momentum. By not doing that, we suffocated them.”

The Falcons (1-2) were somewhat mistake prone, fumbling five times on their first ten plays from scrimmage. Though they lost only one of those (recovered by Peabody senior Jack O’Hara), the miscues made it impossible to sustain drives or build any momentum.

“I put way too much pressure on our kids with some of the things I called,” said Danvers head coach Ryan Nolan, whose team stiffened defensively without giving up a touchdown inside the 20-yard line on Peabody’s first two drives.

The Tanners kept coming, though, putting their best drive together before halftime. Despite starting running back Cam Cuzzi being out due to illness and Jordan Thompkins getting hurt after one carry, Peabody rode Maglione (33 yards on eight carries) and senior Nick Vecchio (39 yards on seven carries) on a 73-yard march capped by Maglione’s scoring plunge that made it 17-0.

“My shoulder might not have been 100 percent, but I knew I needed to do what had to be done for us to win,” Maglione said of going both ways in his return. “The turnovers were huge ... they changed momentum and brought out energy up.”

Coming out of the break, Danvers nearly doubled its first half yardage by marching 76 yards on 15 plays over 9:38. Brad Wilichoski, who found 53 hard yards in the middle of the Tanner defense on fullback dives, scored from the 1-yard line to get the Falcons on the board.

“That was a great, physical drive,” said Nolan. “The kids played hard. We may be a work in progress but this is a crazy year, we’re going to stick together and we’re going to keep coming to work.”

Sophomore QB Shea Lynch (11-of-20, 98 yards plus 24 rushing yards) quelled the Danvers rally by hitting Vecchio on a wheel route for a 12-yard TD early in the fourth quarter. It was a text book example of complimentary football, with Peabody’s offense taking the pressure off its defense by extending the lead.

“It’s football ... you can do a lot of good things and then one mistake comes back to bite you,” Nolan said.

Maglione then made an athletic, diving interception along the sidelines on the next drive to bury any remaining Falcon comeback hopes.

“He’s a difference maker,” Bettencourt said of Maglione. “We needed him at running back, too, and he stepped up. Vecchio’s never played tailback before this week ... we tried him there in practice as a ‘just in case’ and then it comes to fruition in the game and he excels.”

Wilichoski had a tackle-for-loss for the Falcons and James Carmilia had 54 receiving yards and 88 from scrimmage playing running back in the second half. Junior Max Gasinowski also had a couple nice pass breakups in the secondary for Danvers.

Peabody limited the Falcons to 174 total yards and 3.01 yards per carry on the ground. Shay Palmer, Dom Annese (two) Vecchio and Drew Lucas had tackles-for-loss along with Maglione while Jaden Nigro had a strong outing at nose guard.

“These guys are very unselfish,” Bettencourt said of his defense. “They know, ‘OK on this play my job isn’t getting the tackle, it’s to sacrifice myself so he can make the tackle.’ That’s the kind of team chemistry that takes maturity and confidence. This team seems to be getting it pretty quickly.”

Bethesda - Steve was a devoted...