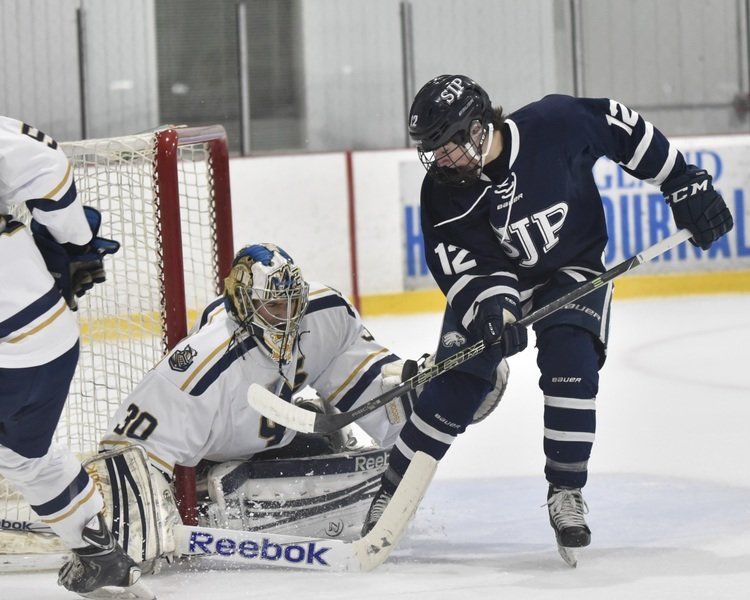 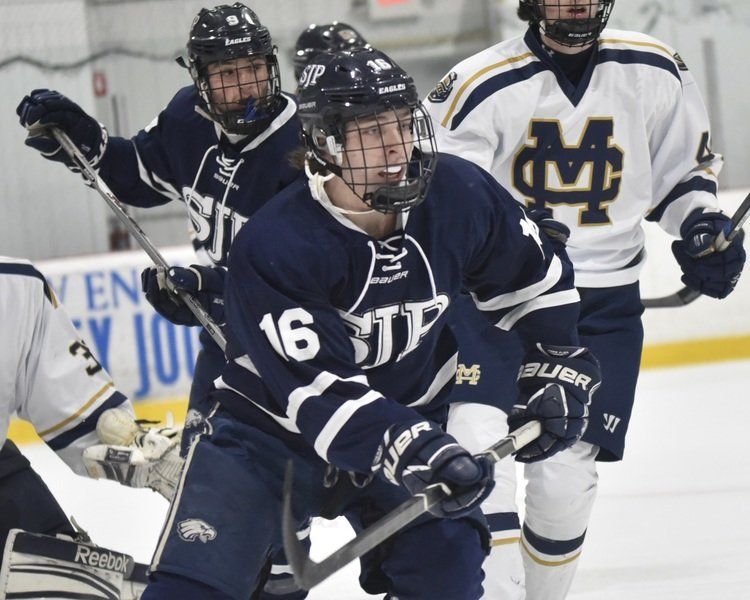 St. John's Prep center Billy Falter looks for room in front of the Malden Catholic net during last night's 2-2 tie. Falter had a terrific scoring chance off a one-timer from the slot that sailed off of goaltender Brian Cannata's shoulder. Rose Raymond photo.

St. John's Prep center Billy Falter looks for room in front of the Malden Catholic net during last night's 2-2 tie. Falter had a terrific scoring chance off a one-timer from the slot that sailed off of goaltender Brian Cannata's shoulder. Rose Raymond photo.

WILMINGTON — It was a game — and outcome — befitting what might be the two best parochial high school hockey teams in Massachusetts.

In a rematch of last year’s Super 8 championship game won by St. John’s Prep, the Eagles battled Malden Catholic to a 2-2 tie before a packed and vociferous crowd at Ristuccia Arena.

"From a fan's perspective, it was a great game. From a coach's perspective, it certainly does get stressful at times ... but frustrating, too," admitted St. John's Prep coach Kristian Hanson, whose team finished with 23 shots on goal. "There were some things we didn't do late where we could've closed it out and didn't ... but MC had great opportunities too and theirs didn't go in, either."

Senior Scott Newton had given St. John’s (5-0-2) a 2-1 lead at 4:27 of the third period with his team-leading fifth goal. Picking the puck off the stick of a Malden Catholic defender behind the net, he swung around towards goaltender Brian Cannata’s left and backhanded his own rebound high into the opposite corner of the cage.

St. John’s Prep captain Kyle Martin was outstanding in stopping 24 shots, including 13 in the middle period.

But on a costly turnover in the Prep’s own end, the Lancers tied it with 1:39 to go. Skilled Nick Botticelli, a senior center and captain from Salem, pounced on the miscue and tucked the disc between Martin’s pads to knot things up for good.

"Kyle was great. I feel bad for him we gave the puck away late right in front of him to their best player," lamented Hanson.

There were some key defensive plays by the hosts that kept the game tied. Newton broke up a 2-on-1 Lancer breakout late by lifting his opponent's stick off the ice, disrupting the play. Ben Essensa, Paul Edson, Josh Cole and captain Seth Murray were among the defensemen that also broke up plays, while junior rearguard Christian Kukas blocked a 2-on-1 break late in the final stanza as well.

The Lancers literally began shooting from the moment the puck was dropped to start the second period and never let up. They had equaled their first period output (8 shots) less then 3 1/2 minutes into the middle frame.

Yet it was the Eagles who scored first. Third line left wing Shawn Thomson got the puck to defenseman Tim Usalis, who had crept down by the goal mouth. The sophomore from Danvers skated across the goal crease and, with Cannata down on the ice, backhanded a shot into the net for a 1-0 lead at 11:48.

Malden Catholic answered just 96 seconds later. Boxford's Cam Walter, following up a shot from the right point that had been blocked, got to the rebound first and roofed a backhand under The crossbar.

"You try to tell the guys to relax and stay composed," said Hanson, "but it's MC, so everyone was up."

The first period, which Hanson said "had a tournament-type atmosphere" that remained the entire contest, produced up-and-down scoring an excellent opportunities for both clubs. But neither could find the scoresheet after 15 minutes.

Malden Catholic nearly scored on the only power play of the frame. Forcing a turnover at the Eagles’ blue line, Walter broke in on Martin on a 2-on-1 and got a strong shot on goal. Martin made the stop but the squirted loose in his crease and Botticelli pounced on it. Martin, however, quickly flashed his left pad twice while down in the ice, denying both of Botticelli’s rebound attempts.

Later on the same power play, Kyle Hentosh of St. John’s broke down the right wing and got a shot off on Cannata, and the sophomore keeper left a big rebound in the crease. Prep captain Kyle Lynch attempted to reach the disc first but was obstructed from doing so by the MC defense.

The Eagles will be back at it Saturday, hitting the road to face another Catholic Conference rival, Xaverian, in Foxboro at 5:20 p.m.