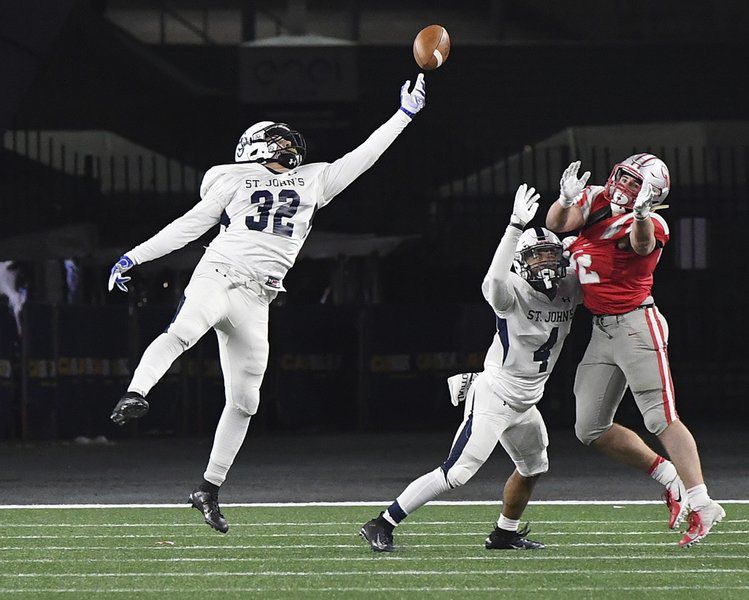 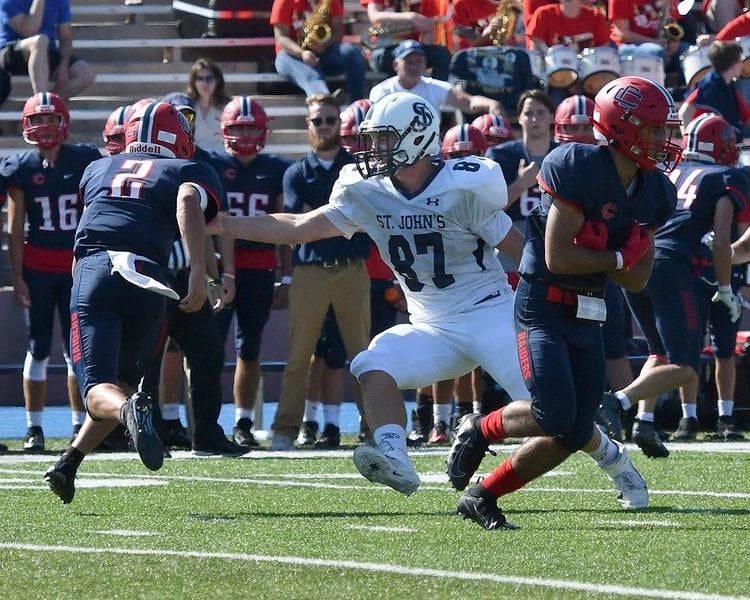 St. John's Prep football coach Brian St. Pierre had never sent a player to St. Lawrence University in his six years at at the helm, but that changed in a hurry when two defensive standouts from the Super Bowl champs decided to become Saints.

"It's exciting to have two guys going to play at the same college," said St. Pierre. "Last year we had Coltan Tangney and Charlie Giunta both go to Williams. Nick has been a program guy for four years and paid his dues behind some pretty good players. When his turn came he was ready to be a full time starter at week side linebacker and really solidified that spot.

"Mike is a very solid two year starter. He broke his leg a year ago, missed a lot of time, and wasn't the same when he came back. As a senior he, Anthony Fagan, and Collin Taylor were all very reliable there. Defensive end was definitely one of our strong positions. Baldini and Fionda are pretty tight; they're like Frick and Frack. Any time you see one you know the other isn't far behind."

The close friends were invited to stay overnight at St. Lawrence and take in the RPI football game in late September. Fionda wasn't sure he wanted to go, but his friend Baldini talked him into making the nine hour trip, and they both loved everything about the university.

"I felt such a sense of community there," said Baldini (5-11, 195 pounds). "It reminded me a lot of the Prep, and you could see how much the players wanted to win. I visited a lot of schools, but didn't feel the same way I did about St. Lawrence. I want to major in business and economics; it's important to me that St. Lawrence is known for its business program."

"Nick talked me into going, and I'm glad I did," said Fionda (6-2, 230), who also plans to continue his track career as a thrower there. "On our way home I looked at Nick and asked what he was thinking. He told me he loved it, and I felt the same way. It just seemed like the right place for me to spend the next four years. It's funny because we really never thought we'd wind up as teammates in college.

"I'm excited for this opportunity; we had an awesome time that weekend. I've found out since then there are seven other kids from the Prep going to St. Lawrence. Tripp Clark (football) and Brian Souza are going to play lacrosse, and Ryan Hart will do track. I've already talked to the track coach there about throwing so I'll be a two sport athlete."

Both Baldini and Fionda know they will play somewhere on defense, but they are willing to try different positions if that's where the coaches want them. Fionda was told he could be anywhere on the defensive line from end to tackle.

"I'll go anywhere they want me," said the Ipswich resident, who carries a 3.85 GPA. "I started playing in the seventh grade as a guard, then moved to tight end in middle school. The last two years I've been at defensive end."

Bandini, who is from Lynnfield, began playing football in the fourth grade. He fell in love with the sport and knew he wanted to go to St. John's not only for academics but because the football team plays such a tough schedule. He has a 3.3 GPA and also plays basketball and baseball.

The other sports are out of the question this season because he suffered a broken foot in the first quarter of the Super Bowl game, but kept playing the entire game.

"I could feel something wasn't right, but when you're playing at Gillette you don't want to get off the field in the big game," said Baldini. "The field was slippery, and I cut to the outside and rolled it. I heard something crack, but it was 100 percent worth it to keep playing. I didn't tell anybody about it, but went to the ER afterward. Sure enough, it was broken.

"Coaches at St. Lawrence told me I'll be somewhere on defense, either outside linebacker, safety, or DB. I really don't care where. Right now it's grinding it out in workouts every day. Mike and I want to bring a winner's mentality to the Saints. We both got our letters at the same time, and opened them up. I knew right away I was accepted when I saw something from the dean of admissions. It's a great feeling to know we're both in."

Fionda said the thing he enjoyed most about his senior football season was the brotherhood on Team 113.

"I loved it because this season we all came together, and our common goal was to win. We worked hard and everybody from seniors to freshmen were willing to grind. I think we surprised a lot of people, who didn't give us much of a chance to beat Catholic Memorial in the Super Bowl, but we did."