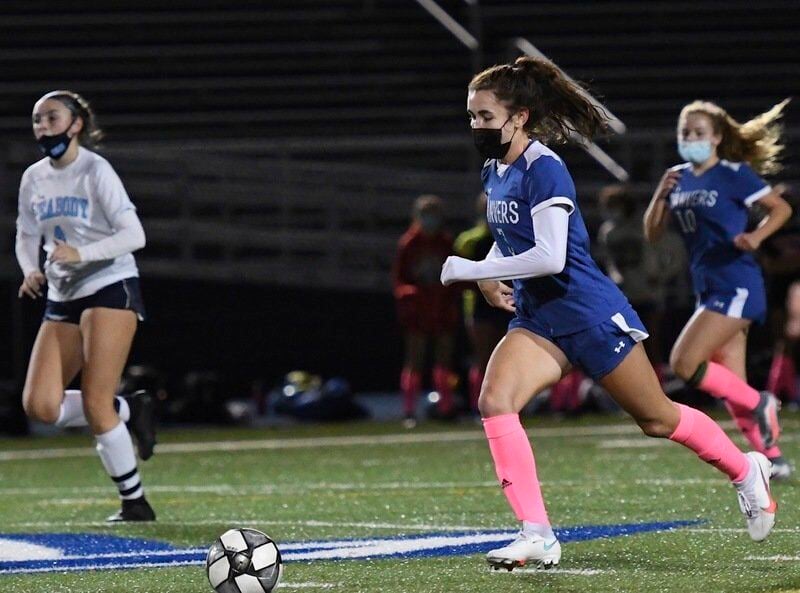 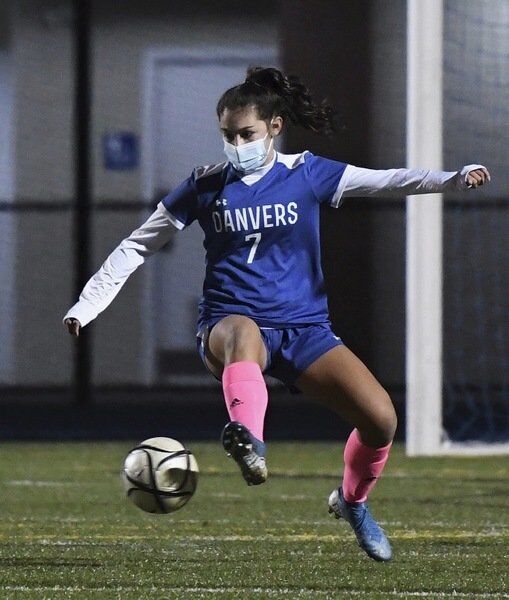 Rose Raymond photoSenior captain Livvi Anderson is one of the state’s best defenders and a great leader for the Danvers girls soccer team. 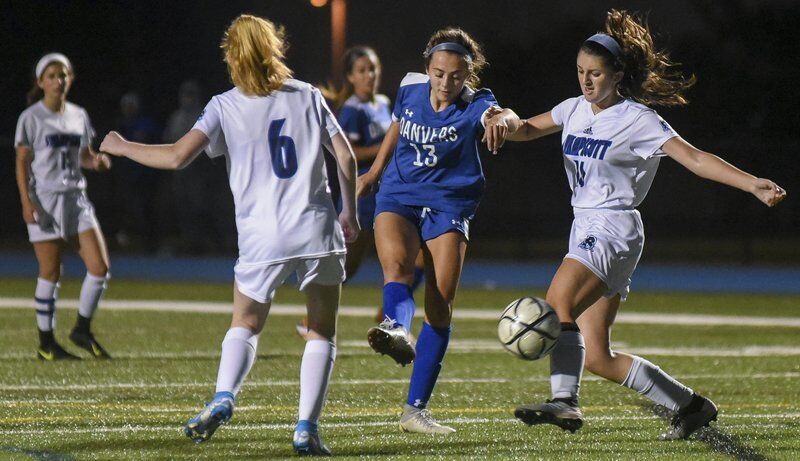 JAIME CAMPOS/Staff photoDanvers’ Riley DiGilio had 33 points last year as a junior and already has seven goals for the Falcons this fall. 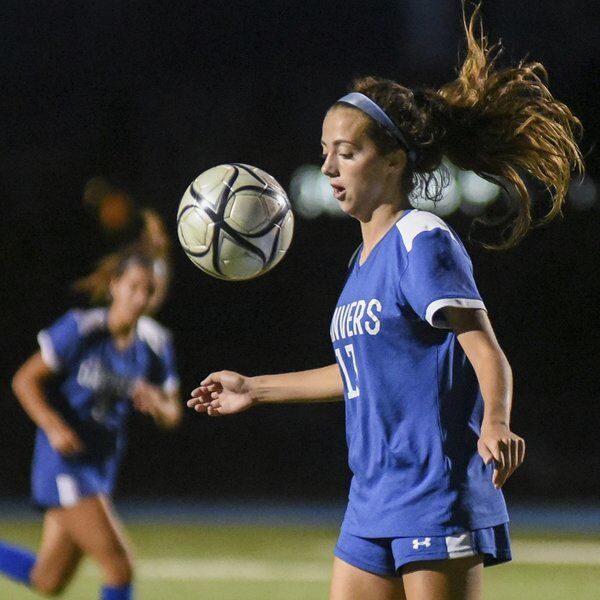 Rose Raymond photoSenior captain Livvi Anderson is one of the state’s best defenders and a great leader for the Danvers girls soccer team.

JAIME CAMPOS/Staff photoDanvers’ Riley DiGilio had 33 points last year as a junior and already has seven goals for the Falcons this fall.

Since their season began a couple of weeks later than the rest of the Northeastern Conference, you might’ve expected the Danvers High girls soccer team to take some time to find its footing.

Then again, finding feet has always been what the Falcons do best.

Undefeated and scoring at a torrid pace with 26 goals in four matches, Danvers looks every bit the Division 2 state title contender they were expected to be in a normal season. Not having a state tournament or even official NEC standings changes their goals but hasn’t changed their mindset.

“Having great rivals like Peabody and Beverly and playing Masco this year, when you’re in that competition you don’t think about it,” said senior co-captain Riley Digilio. “We’ve been rivals since town soccer and anytime we can compete with any of those teams it keeps us going.”

In the middle of a three-game swing against their biggest rivals, Danvers took down Peabody (6-1) on Tuesday and is slated to face Masconomet in a battle of unbeatens Friday on the turf at Boxford Commons. They then get rival Beverly next Tuesday under the lights at home.

“We’re super excited,” said All-State defender and senior co-captain Livvi Anderson. “The best competition always brings out our best play and getting it somewhat early in this COVID season is great because no one knows how long we’ll get to play. We’re all trying to have fun and make the most of it; we feel lucky we get to have a season.”

The Falcons boast eight seniors with Digilio and Anderson being captains and four-year varsity players. Up top, Digilio’s speed on the outside and absolute unselfishness have helped the team put away a ridiculous number of goals; the St. Anselm College women’s soccer commit has seven goals of her own after providing 33 points last year as a junior.

“She’s the ultimate team player,” said longtime Danvers coach Jimmy Hinchion, whose next win will be the 350th of his 22-year tenure. “She can finish at the highest, quickest level yet she’s super unselfish and is willing to create. She cares about all her teammates and will put any one of them first.”

Junior Arianna Bezanson had 12 goals for Danvers including three straight hat tricks while Reese Pszenny has been a force at the opposite outside mid spot. Senior Julia Vaillancourt has been solid distributing and Mia Jordan adds another dimension to the attacking group.

“I love taking it up the wing and making those runs,” said Digilio, who got used to the current rules while playing with the NEFC club this summer. “Our front line has been together for so long ... we grew up playing together and we click super well. We have such good mids, I love making plays with them, connecting and switching.”

Bezanson went over 50 career goals last week and the Falcons are outscoring their opponents 26-3 so far. It’s a tough pace to keep up but with the confidence they have right now it’s far from impossible. As a team that doesn’t typically rely on corner kicks or resets and excels at stringing together good passes, this fall’s rules haven’t changed Danvers’ approach as much as some other squads.

“With Ari, Julia and Mia in the middle and Reese and Riley outside ... they win all the 50/50 balls, they can take players on, they pass so well and they’re super confident,” Anderson said. “And their shots have been on, for the most part, so that makes them so hard to defend.”

The Falcons have been equally strong in the back despite rules that forbid contact and headers which you’d think would limit a defender’s ability to stop a high octane offense. Having players that rely on skill rather than brute strength like Anderson, Gabby Chisholm and Mikayla Shaffival certainly helps.

“I love to head the ball so not being able to do that was kind of a bummer,” said Anderson, who will play Division 1 college soccer at Colgate. “We’re getting used to it and most of the refs have been pretty good about allowing a little bit of contact. We’re really comfortable on the ball and on our feet so I think that helps us.”

A starter since her freshman season who helped Danvers win the 2017 state title, Anderson honed her skills for FC Stars this past summer. She’s a gifted athlete who always stays calm under the pressure of an opposing attacker.

“She has to be among the best defenders in the state, without question,” said Hinchion. “She has incredible athleticism and soccer IQ. She’s also one of the nicest kids you could ever meet and wears her heart on her sleeve.”

Hinchion knows he’s fortunate to have two outstanding leaders in these uncertain times. Anderson and Digilio are among the most competitive and driven players he’s ever coached. Their positive attitude has been key to the team embracing changed made necessary by the pandemic rather than sulking about them.

“They always want to keep score and they give everything they have no matter what they’re going,” the coach said. “They’re fantastic leaders.”

Danvers is aiming to play ten games up through Thanksgiving, making the absolute most they can of their time together. Isabel Donahue, Avery Scharffenberg, Haley Murphy and keeper Holly DeAngelis are the other seniors and the whole Class of 2021 is grateful to be on the pitch.

“It’s all super bittersweet,” Anderson said. “We’re happy to be getting these last games in, and to be going out together like we started.”

One big plus for Salem High this year is the experience its back line is gaining. Isabella Cunha has emerged as an excellent leader even though she’s just a sophomore and has been the lynch pin of the Witches defense. Juniors Sierra Clawson and Breanna Stead have also been great and improving with each game, head coach Andrew Douglass said.

Pingree’s had some informal friendlys with area teams and has bene scrimmaging among themselves but the Highlanders will finally get to play a full game and celebrate Senior Day on Saturday when they host Winsor.

It’s a great opportunity for captains Lexi Gudaitis and Dana DePiero and the rest of the team’s seniors to enjoy what they can among this shortened, unique season.

Hamilton-Wenham’s unbeaten streak is now at eight and with 14 points the Generals have just about clinched the top seed in the upcoming Cape Ann League tournament. The Generals are also closing in on the Baker Division title with a healthy lead over rival Amesbury with just two games left in the regular season.

Though his team may be going through some growing pains at 1-4, Peabody’s Dennis Desroches is happy with what he’s seen in terms of effort and intensity.

“I wish we had a second time through the league to let it all play out because I think these teams are all really good and we’re going to improve,” he said. “We’re all happy to be out here playing at all and we know how important is it for these kids and their mental well being. That’s the important thing for this year.”

Young keeper Emma Bloom has been outstanding for the Tanners so far and Ava D’ambrosio and Branae Craveiro had standout efforts in the loss to Danvers.

Set Pieces, a column on North Shore girls soccer, appears in The Salem News each Friday during the fall season. Send news and notes to Matt Williams at MWilliams@salemnews.com and follow along on Twitter @MattWillams_SN.