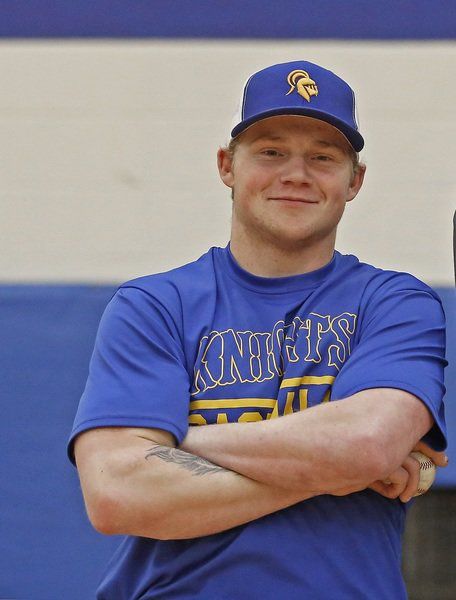 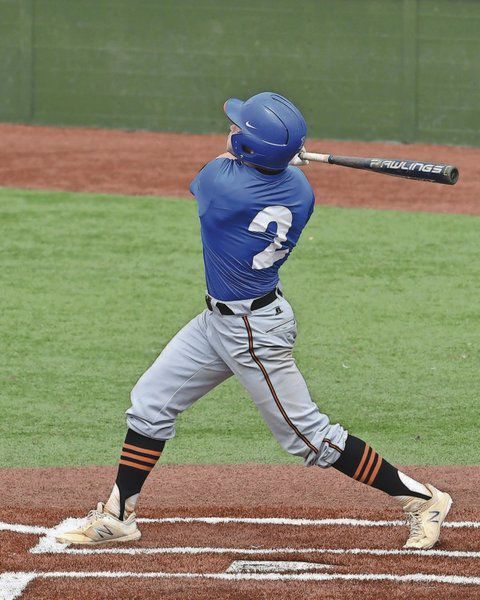 Spencer Brown from Beverly has embarked on his pro career with the rookie league Angels out in Arizona.Rose Raymond photo 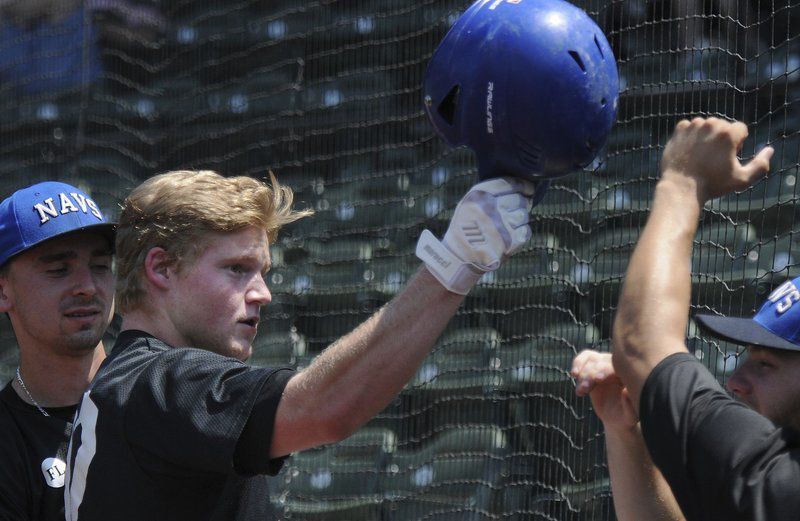 Spencer Brown of Beverly has been a power hitter at every level so far and wants to continue that trend in the pros within the Angels farm system. PAUL BILODEAU/Staff file photo 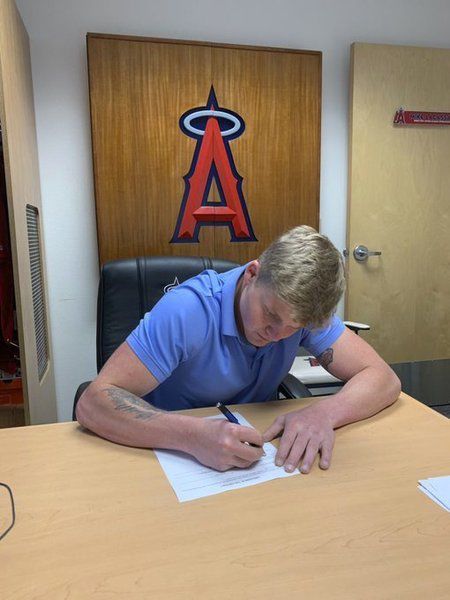 Spencer Brown from Beverly has embarked on his pro career with the rookie league Angels out in Arizona.Rose Raymond photo

Spencer Brown of Beverly has been a power hitter at every level so far and wants to continue that trend in the pros within the Angels farm system. PAUL BILODEAU/Staff file photo

Watch Spencer Brown take a couple of cuts and two senses will tell you he was born to swing the baseball bat: seeing and hearing.

The eyes see a smooth, almost effortless fusion of arms, shoulders and hips perfected through tens of thousands of repetitive swings over the years.

The ears? They hear what sets Brown apart from the vast majority of baseball players: the violent, piercing crack of bat-on-ball that reveals the type of lefthanded power that's one of the Holy Grails in today's game.

Just 13 months removed from his last at-bat for Beverly High School, Brown's career trajectory has followed the path of one of his deep home runs: rising fast and taking off. A 39th round draft choice of the Los Angeles Angels, the 20-year-old is cutting his teeth in the rookie Arizona League and getting used to life as a professional ballplayer.

"At the age of three my dad asked me what I wanted to be when I got older and I told him 'professional baseball player'," said Brown. "On draft day, I felt really thankful. I kept thinking about my dad, how much he worked with me on my goal with lessons, travel ball, personal training ... I'm so thankful I had a father that stuck by me through all the ups and downs, and I felt so accomplished knowing all the work paid off and my childhood dreams came true."

At 5-foot-10 and 185 pounds, Brown can play shortstop or third base. He's finding his footing in rookie ball, with hits in three of his last four games.

Going from Northern Essex Community College, where he played this past spring, to the Arizona League was a whirlwind, and the milestones keep falling down: Brown got his first professional hit on July 1, had his first multi-hit game on July 13, and delivered his first extra-base knock this past Thursday.

"I'm living baseball 24-7, and that's what I love to do. I love waking up in the morning and being able to head to batting practice, do nothing but work on the mental and physical aspects of the game," Brown said.

"Another great part about this is the friendships you build here. As teammates we go through everything together; they're are always there for me and pushing me to be my best."

Path to the draft

After a tremendous career at Beverly High that included two Northeastern Conference MVP awards and a trip to the Division 2 state final his senior season, Brown wasn't sure what would come next. Division 1 college baseball opportunities weren't materializing, and the rigors that go with academics at that level were a challenge.

That's where Jeff Mejia and his nationally regarded Northern Essex Community College junior college program came in. Brown decided to join the Knights, where he planned to play for a year or two before reconsidering full-fledged college options.

"I never applied myself in high school as a student," Brown admits. "Coach Mejia set me up with an academic coach and they were on top of me with assignments, helping me stay ahead on deadlines. I left with a 3.2 GPA and I learned the value of hard work."

While playing for the Knights, though, Brown hit the ball so well that he caught the attention of professional scouts. How could these numbers not draw checkers and cross-checkers: Brown hit .486 (fourth in the nation for junior college) with absurd extra-base power. His 146 totals bases were fifth in the country, he slugged an even 1.000 and had an OPS (on-base plus slugging) of 1.512.

"His swing is special," said Mejia, whose program has sent scores of local players to Division 1 college baseball powers with a good number of future pros sprinkled in. "He has such a controlled aggression technique. That, along with his excellent eye hand coordination, allows him to keep control of his body while using max effort."

More often than not, that violent swing sent the baseball over the fence. Brown hit 17 homers for Northern Essex, the most of any player in the junior college ranks in America.

A ridiculous six of those round trippers came one day in April, a doubleheader against Massasoit that capped a 17-RBI week in which Brown hit .684 and cemented himself on the Major League scouting radar.

"The wind could've been blowing in and most of those still would've been gone," said an American League scout that was at those games. "Any time a kid hits that many home runs in a day, it catches your attention. His mechanics were phenomenal — he's got that front hitting elbow up before the wrist, and that gives him a great launch angle."

A full season that included 52 RBI and 30 stolen bases brought First Team All-Region honors and an NJCAA All-American nod. For Brown, the beauty of playing for NECC shined through in the immersive atmosphere and instant connection with his fellow Knights.

"If it wasn't for Northern Essex, I wouldn't be where I am. Coach Mejia was great for me and one of the most trustworthy guys you'll ever meet," Brown said. "It was the best baseball program for me because I was able to play every day. That made a huge difference in terms of getting better and getting the most exposure possible.

"Everyone at Northern Essex was there for the same reason: to make the next level. We all pushed each other past our limits."

Dave Wilbur, Beverly High's baseball coach for 17 years, knows Brown isn't embellishing when he says he told his dad he'd be a pro ballplayer at age three. The veteran coach, who retired after the 2018 season, heard the refrain many times while coaching the left-handed hitting prodigy.

"It's a dream come true for him. He's been talking about it since before he really broke out. He always wanted that chance, and I'm so happy for him and his family that he made it happen," said Wilbur, who coached two Major League draft picks at BHS in Brown and former big league pitcher Jack Leathersich.

Brown's three high school seasons were remarkably consistent: he never hit under .400, batting .426 for his career with 86 hits and 79 RBI. He was Northeastern Conference MVP as a sophomore, missed the majority of his junior year with an injury and was MVP again as a senior with a powerful pitching arm aiding his big bat.

"If you gave him a fastball anywhere, he'd kill it," Wilbur recalled. "He's got great bat speed and power. He has terrific instincts, and I loved coaching him because he's so competitive and driven. He never flinched in big games — he played fearlessly and loved the big moments."

Winning the Division 2 North title and getting to the state final was a credit to Brown and Beverly's esteemed senior baseball class of 2018 that set a school record for wins, going 20-5. The group surely helped fan the flames of their future pro's love of the game.

"Spencer really matured that senior year and carried that into an amazing season at Northern Essex," Wilbur said. "I can't say enough about that senior class he was part of. We all feel a part of his success and are all rooting for him."

The road to the big leagues is admittedly a long one. Brown was batting .241 through the weekend, but he's been playing good defense and making subtle adjustments to get to professional pitchers. Some underlying numbers show he's onto something: Brown's up to .286 since rookie ball's brief all-star break and he's hitting .444 in 10 at-bats with runners in scoring position.

"Most people think the velocity is the biggest adjustment, but it's not. It's the movement," Brown explained. "Before this level, you see a lot of flat fastballs. Now it's cutters, sinkers or splitters coming at 90 or 95 (MPH); just as you're about to hit it, it moves and you catch the end of the bat instead of the barrel. That's what I'm getting used to."

That kind of heady, analytical view on his transition to pro ball shows just how tailor made Brown's psyche is for baseball. Add to that his physical, powerful swing and an attitude that screams 'love for the grind of the game', and it's clear his journey in baseball is just beginning.

"He works like a demon and is a guy that loves baseball. It won't matter to him if he's hot, on a bus, at the park all day — he'll love that. He's a gym rat for baseball," Wilbur said.

"I'd never underestimate him."

Topsham, ME - Richard M. Barton of Topsham, ME passed away peacefully on Friday, April 10, 2020 at Midcoast Hospital in Brunswick, Maine. He was 80 years old. Growing up in Salem, Mass. and Marblehead, Richard (Dick) was an avid sailor. He raced one-designs and enjoyed cruising with his fami…