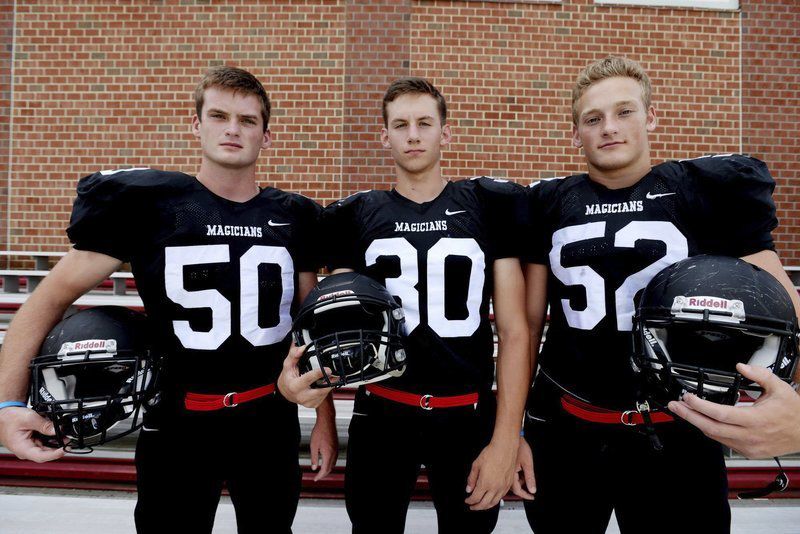 MARBLEHEAD — Sitting back on their heels and expecting success to come easily is not in the DNA of the Marblehead football program.

On the heels of the program’s second-ever Super Bowl appearance just eight months ago, the 2017 Magicians reported to training camp ready to work even harder than they did while going 11-1 in 2016.

“We didn’t finish last year. We only made it to Gillette, (but) we didn’t win there,” said Aidan Gillis, a three-year starter at inside linebacker and of the team’s three captains, referring to last year’s Division 2A Super Bowl setback to fellow unbeaten Falmouth. “So as far as work goes, we have to do everything we did last year and then a little more.”

That’s a trend set to continue this fall: all three captains are ‘backers, with legitimate defensive Player of the Year candidate Gillis terrorizing the middle and fellow captains Teddy Mayle and Nick Corsini returning to anchor the outside.

“It’s a lot to live up to,” Mayle said of MHS’ linebacking tradition. “The position is always a leadership spot, and that’s something we’ll try to carry forward.”

“The guys before us, like Reed Cressy and Harry Craig, passed down their knowledge and the tips and tricks,” said Gillis, who wears the same No. 25 his brother Liam did when he was also a Magician tackling machine. “All three of us are pretty comfortable with our roles.”

Early in the season, Marblehead may rely on its defense (which also returns Tyrese Hardy) in the effort to defend the three-time Northeastern Conference crown it wears. They’ll be breaking in a new starting QB — as of press time, the battle raged between Chris Gally, Dewey Millett and Danny Doherty for the starting snaps — while also graduating the top running back and top few pass catchers from the ‘16 squad.

“We lost a total of 19 guys,” said Rudloff, “and there were oodles of skill in that group. We’re breaking in a lot of new skills position players.”

A veteran line will help ease the transition. Gillis starts at center and Corsini is a returning starter at guard. Seniors Will Bosworth and Ryan Dumais are also back, and towering tight end Andy Clough (6-foot-7) presents a unique threat in terms of both blocking and catching passes.

Derek Marino, a 6-foot-2 speedy senior, is the leading returning rusher and receiver and figures to be a big target for whoever wins the QB battle. Seamus Keaney is a chain moving option at receiver, while Dan Testa and sophomore Devin Romain will compete for touches at running back.

Asked which game they were most looking forward to in 2017, all three Marblehead captains said Triton. That’s the season opener, and that’s by design — the Black-and-Red are not getting caught looking ahead and remain totally committed to the given task at hand.

“We lost a lot of great players from last year,” Mayle said. “So far in camp the seniors have been stepping up. We’re trying to replicate the leadership we got the last two years as younger players.”

“Practice has been awesome so far,” Gillis added. “The offense is working hard and the defense has been feeling good. Our biggest focus is on trying to get better every day.”

Did You Know?: The Magicians’ win streak in Northeastern Conference play is now 15 games as they swept to league titles in 2014, 2015 and 2016. Overall, Marblehead has won four straight league crows and six all told in coach Jim Rudloff’s eight previous seasons.

Does not include MIAA playoff dates

The cover story and team-by-team previews for the 2017 high school football season.