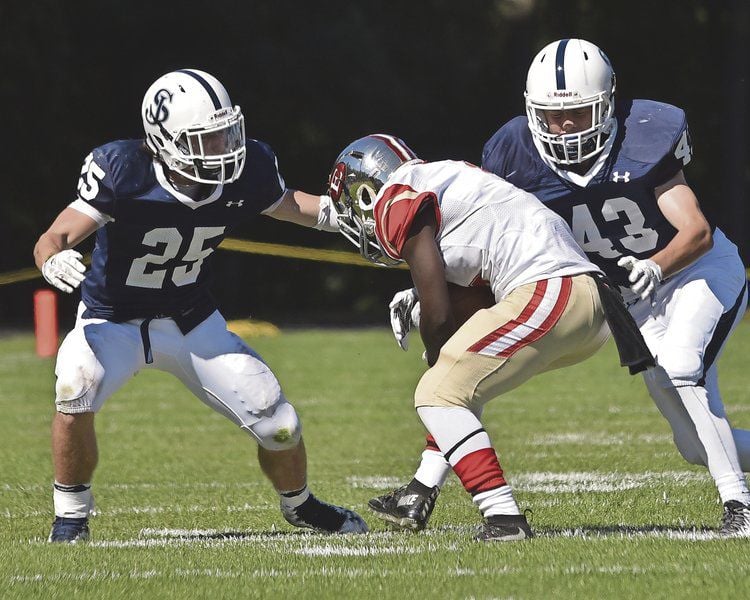 Rose Raymond photosSt. John’s Prep senior Joe Masterson, left, and junior Mike Yarin (43) are both returning starters on defense that could play on both sides of the ball this fall. 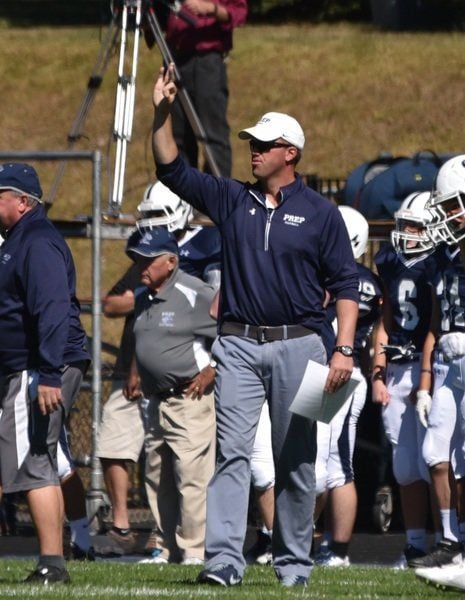 Head coach Brian St. Pierre’s Eagles return no players that took a varsity snap at quarterback last year, so finding the new signal caller will be one of the biggest focuses of training camp. St. Pierre begins his third season with a 16-6 mark. Rose Raymond photo. 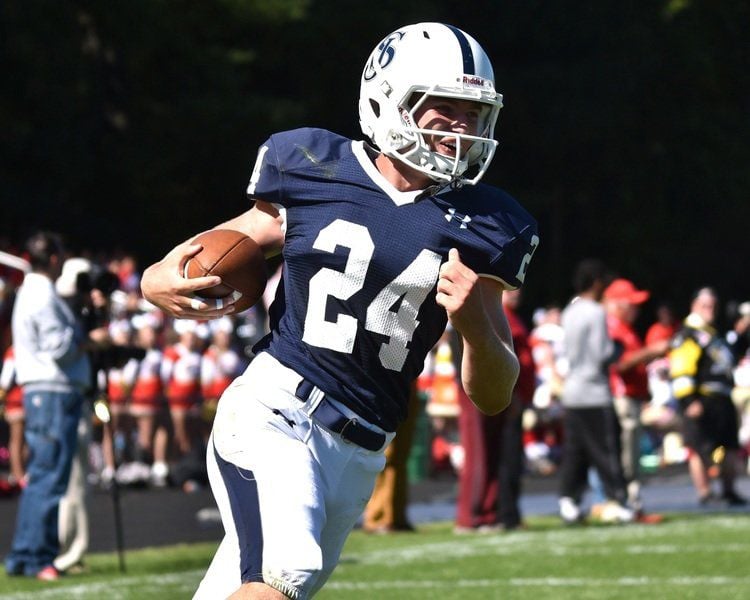 Hayden Rockett, who caught nine touchdown passes in 2015, will be the top target for whoever emerges as the starting quarterback for St. John’s Prep.

Rose Raymond photosSt. John’s Prep senior Joe Masterson, left, and junior Mike Yarin (43) are both returning starters on defense that could play on both sides of the ball this fall.

Head coach Brian St. Pierre’s Eagles return no players that took a varsity snap at quarterback last year, so finding the new signal caller will be one of the biggest focuses of training camp. St. Pierre begins his third season with a 16-6 mark. Rose Raymond photo.

Hayden Rockett, who caught nine touchdown passes in 2015, will be the top target for whoever emerges as the starting quarterback for St. John’s Prep.

After two record breaking years quarterback Ollie Eberth is now playing at Amherst College, and the St. John’s Prep football team is in desperate need of finding somebody to take over behind center. Head coach Brian St. Pierre, an outstanding QB, who took his talents all the way to the NFL, does not have anybody on his roster that has taken a single varsity snap.

The main competition for the job is between senior Chris Burke and junior Michael Yarin, who was moved to the position from running back.

“It’s still wide open,” said St. Pierre, who is starting his third year at the helm. “Whoever gets the job will feel he has good people to throw to.”

“They all have experience and are good targets,” said St. Pierre. “We have to find a guy to get it there, and have good protection from the line so he has time to throw. That’s all part of the process. Right now there are many moving parts and a lot of open spots, but the competition is really good.”

Senior Robby Delisle (6-foot-1, 240 pounds) will be at right guard, and senior Connor Robinson have been moved from guard to center to take over for Jay Carnevale, who is now playing at Brown. Senior Sean McHale (6-foot, 220) returns with experience and should help out

Graduation claimed leading running back Dillon Preston (1,174 yards, 11 TD’s). Seniors Alex Rodolosi, who had 15 carries for 78 yards and a touchdown last year and Tristan Wallace (10-107) and senior fullback Cam Weaver will be counted on to fill his shoes.

“There are also a bunch of young guys at running back they may be able to help out,” said St. Pierre. “We’ve got a lot of spots wide open, and it’s an excellent time for the young kids to make a name for themselves. As coaches, our eyes are wide open. We graduated a lot of our top players both on offense and defense so we’ve got to put the pieces together.”

For St. Pierre, the benefit of training camp ahead of the Sept. 10 opener against Haverhill is giving up-and-comers a chance to get noticed and make their impression. Graduating so many players that contributed to back-to-back 8-3 teams has left plenty of jobs open.

“There are a lot of question marks, but the good news is we have 105 out for the team not including freshmen.That’s a positive sign for our program,” St. Pierre said. “Our freshman team was very good last year, but it’s a huge jump up to the varsity level. Sean Letarte, Jake Miller, Alex Lane, Aise Pream, and Cooper McNinch are some of the top candidates who will get looks.”

The Eagles will lean on their defense, led by senior Hunter Brown and sophomore James Taylor in the middle at defensive tackle. Seniors John Churchwell, Hunter Smith, and Ryan McNeil all played a lot last season. Senior Brian Barrett has been moved to defensive end while seniors Joe Masterson and Scott Hunter return in the secondary. The other spots are wide open, and a lot will be determined in practice and scrimmages.

“We want to be a very strong defensive team until we figure out our offense,” said St. Pierre. “If we can keep the other team off the scoreboard we’ll have a chance to win. We don’t have the luxury of a couple of easy games to start off with. It’s Haverhill, Central Catholic, and Everett to start out before we jump into the Catholic Conference. The schedule is very demanding, but it’s nothing new. We face the same thing every year.”

Did you know?: When St. John’s faces Haverhill in the season opener it will be a coaching match up of two former Eagles captains, St. Pierre (1998) and Haverhill’s Tim O’Connor (1993). The two squads have scrimmaged in recent years, but will now open the regular season with a non-leaguer.

Does not include MIAA playoff dates