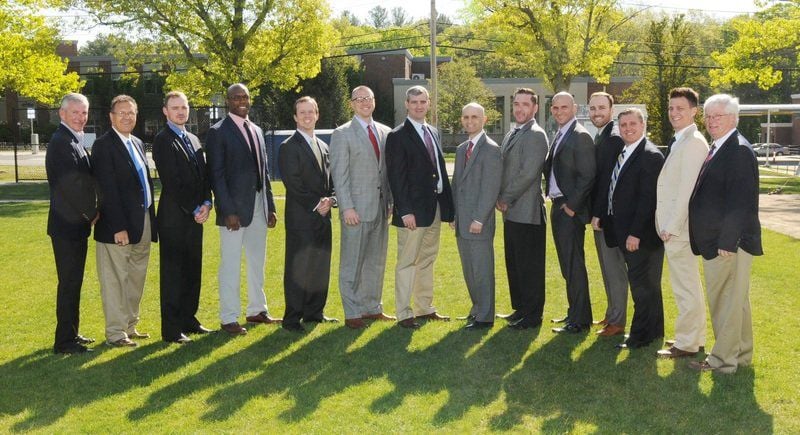 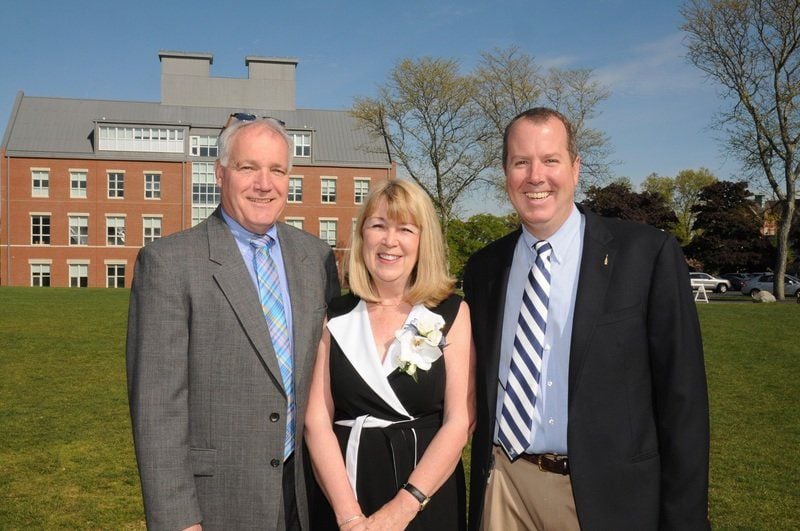 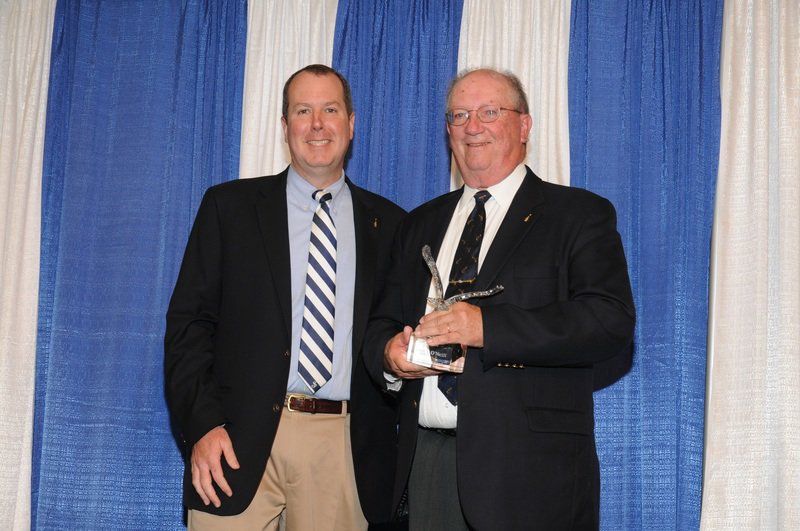 Courtesy photosLegendary St. John’s Prep golf coach Larry ONeill (right) was given a Crystal Eagle Award by the school during its Hall of Fame ceremony Saturday. The honor, given for commitment and dedication to the school, is given to him here by Headmaster Dr. Edward Hardiman.

Courtesy photosLegendary St. John’s Prep golf coach Larry ONeill (right) was given a Crystal Eagle Award by the school during its Hall of Fame ceremony Saturday. The honor, given for commitment and dedication to the school, is given to him here by Headmaster Dr. Edward Hardiman.

DANVERS — A dozen of St. John’s Prep’s top athletes from years past, as well as two outstanding coaches, were honored by the school during its 26th Hall of Fame induction ceremony Saturday morning.

Jon Goff, St. John’s Prep Class of 2003,wore his Super Bowl XLVI ring from his days as a starting linebacker for the champion New York Giants. The former Peabody resident was a three-sport standout for the Eagles and a two-year football captain, leading the gridiron squad to Catholic Conference titles in both his junior and senior years. He also set a school record in the discus for the spring track state champs and played varsity basketball for two years.

“Coach (Dan) Letarte told me to never dribble the ball again after I bounced it off my foot,” laughed Goff, who now enjoys coaching and watching his 8-year-old daughter play soccer. He has made his home in Eden Prairie, Minn. the last three years, employed by TURCK engineering.

“I wanted him to shoot and rebound,” said Letarte. “I remember the time Jon asked if it was okay to dunk. I said sure, and that’s what he did when we beat a 17-0 Charlestown team in a great game. Jon was very young — only turning 16 on his birthday in December his senior year — but you could tell he was going to go down the same path as (former SJP legends who played in the NFL) Brian St. Pierre and Wayne Lucier.”

Goff went on to be a four-year starter for Vanderbilt University, was a two-year captain and All-Southeastern Conference linebacker there before being drafted by the Giants in 2008. His pro career ended prematurely because of two serious knee injuries.

“I came back for my brother’s wedding last year and took a quick drive with my family to St. John’s. It looks a lot different now,” Goff said. “When you’re a professional football player every day is a blessing; you never know when it’s going to be your last. What I learned here and at Vanderbilt prepared me for life.”

One-time dominant wrestler Mike Pedro (Class of 2002) is now a doctor who regretted forgetting to wear his Prep blue blazer Saturday, as he was hurrying out the door from his home in Windham, N.H.

“That was the uniform of the day,” said Pedro. “When I look around I feel like I’ve never been here before; the place has grown and changed so much. It’s really good to see Manny (legendary wrestling coach Manny Costa) because  I haven’t seen him in years. And I’m really proud to go with in with so many outstanding athletes, especially Jon Goff.”

Pedro set state records for most pins in a season (54), which was also a national mark. He also had the Massachusetts record for most pins in a career (153), most wins in a season (61) and most career wins (213. The three-time All-American and a four-time state and New England champion went on to wrestle at Brown University. The best memory of his Prep days, he said, is winning that fourth state title.

For Ken Hannan (Class of 1991), returning to his old school for his 25th reunion before being inducted into the Hall of Fame made it extra special. Hannan was an outstanding soccer player who was Catholic Conference MVP and named to the All-State and Eastern Mass teams as a senior. He put up career marks of 56 goals and 23 assists in three years on the varsity. He went on to captain the ECAC champion Brandeis team and was named an All-American. Hannan is the 12th all-time leading scorer for Brandeis and went on to play semi-pro soccer.

“I loved everything about the Prep, but especially the camaraderie,” said Hannan, who lives in North Andover. “We shared the same experiences. We all got together at the reunion and talked about the old days. I can’t believe what they’ve done here with the expansion, but I’m not surprised because they have a great team pushing to get more alums involved.”

John Gillespie (Class of 2003) was a track star and key member of the Eagles’ outdoor state champs. He captained the cross country squad and was a seven-time member of state champion relay teams in both indoor and outdoor track. The Charlestown resident went on to star at Colgate, where he was on the school’s record breaking 4x800 team.

“It’s a great feeling to be going into the Hall of Fame. I’m truly honored,” he said. “I’ll never forget the lunch hall, and getting together with all my good friends every day. It’s so nice to see so many of my old teachers and coaches here.”

Jake Marsello (Class of 2001) did it all for the Eagles in football, basketball and baseball. A football captain and league MVP, he was also a basketball all-star. But his best endeavors came on the mound for the baseball team, leading St. John’s to the state title.

Marsello, who now lives in Danvers and coaches daughter Kaylee’s 10-11-year-old softball team, went on to excel at Boston College and later pro ball for the Chicago Cubs.

“My senior year we went into the (baseball) tournament a little over .500 (record-wise),” said Marsello, who grew up in Lynn. “We were definitely an underdog. Winning it and beating BC High in extra innings are two of my favorite memories from St. John’s. Some of the guys I wound up playing with at BC were on that team.”

Matt Sullivan (Class of 2006) lives in Wakefield, but he and his pregnant wife are moving to Danvers this week. He was named Best Athlete at St. John’s Prep his senior year after playing four years for the football team, four seasons of indoor track, and three for the baseball team — captaining all three. He went on to star at Trinity College and was a member of the Bantams’ 2008 Division 3 national champion baseball team.

“I’ll never forget those preseason trips to Wayne, Maine for football camp,” said Sullivan, who now coaches the North Shore Storm in North Shore Baseball League. “That was always tough, but set the tone for the season. In track I’ll always remember beating Chris Fox (of Xaverian) in the 550 meter dash and setting a school record. In baseball going to the state championship had to be the highlight.”

For Matt Roy (Class of 1995), St. John’s Prep is like a second family. All five Roy brothers played sports for the Prep, and his brother John is the school’s long-time lacrosse head coach. Matt was named an East Conference all-star three times, led Eastern Mass. in lacrosse scoring as a senior with 96 points, and captained the basketball team, where he was an All-Conference point guard. His 487 assists ranks second in school history.

“This is a very special place for me and my family,” said Roy, a former Salem News reporter who had a great lacrosse career at Amherst College and still plays for the North Shore Lacrosse Club. He also helps coach his son’s Beverly U-9 team. “St. John’s is an extension of our family. After you finish college you think you’re done athletically, but I’m grateful for the opportunity to keep playing with North Shore.”

Barry Kolano (Class of 1980) was the first Prep runner invited to the Eastern State Championships, where he competed in both his junior and senior years. He owns the second best time in the 600 yard event and went on to captain both the indoor and spring track teams at Holy Cross. He continued to compete as a triathlete for many years, doing the Ironman Canada event in 2002.

Brock Romano (Class of 1982) captained the baseball team at St. John’s and was a Catholic Conference all-star who went on to play at Babson College. He now lives in Westborough.

Legends on the diamond, court and pitch

Jason Hyland (Class of 2001) of Beverly led the state in home runs as a senior and set the school record for homers, RBI, batting average and slugging percentage. He also stared on the gridiron. Hyland went on to play baseball at the University of Tampa and later for Cal State, Chico. He went to the college World Series with both universities and later played professionally in the Pecos League. He also coached the Beverly Legion team.

Another member of the talented Class of 2001, Paul Roberts of Winchester, led the Eagles’ tennis team to the state championship in both his junior and senior years. He had a 36-1 regular season record in two years as the club’s No. 1 singles player. Roberts went on to captain the Tufts University men’s tennis team. He was named to the All Interscholastic Collegiate Tennis Team in 2003 and 2004, coached tennis at Harvard during the summers, and was a tennis pro at several clubs.

Tim Murray (Class of 2005) made his mark on the soccer pitch as a goalie, allowing just four goals his entire senior year while being named All-State and an Eastern Mass all-star. He went on to captain Providence College and holds the Friars’ record for career shutouts (29). After coaching at Brandeis, Providence and Holy Cross, he is now playing pro soccer in Europe.

Track and cross country coach Bill Boyle of Beverly and freshman hockey coach John Zimini of Abington were also inducted for their contributions. Boyle, a math teacher at St. John’s Prep for 32 years, has coached 38 individual conference event champions and four school record holders. Zimini has been the freshman head hockey coach for the past 12 years after 32 seasons as varsity assistant and four as JV head coach/varsity assistant.