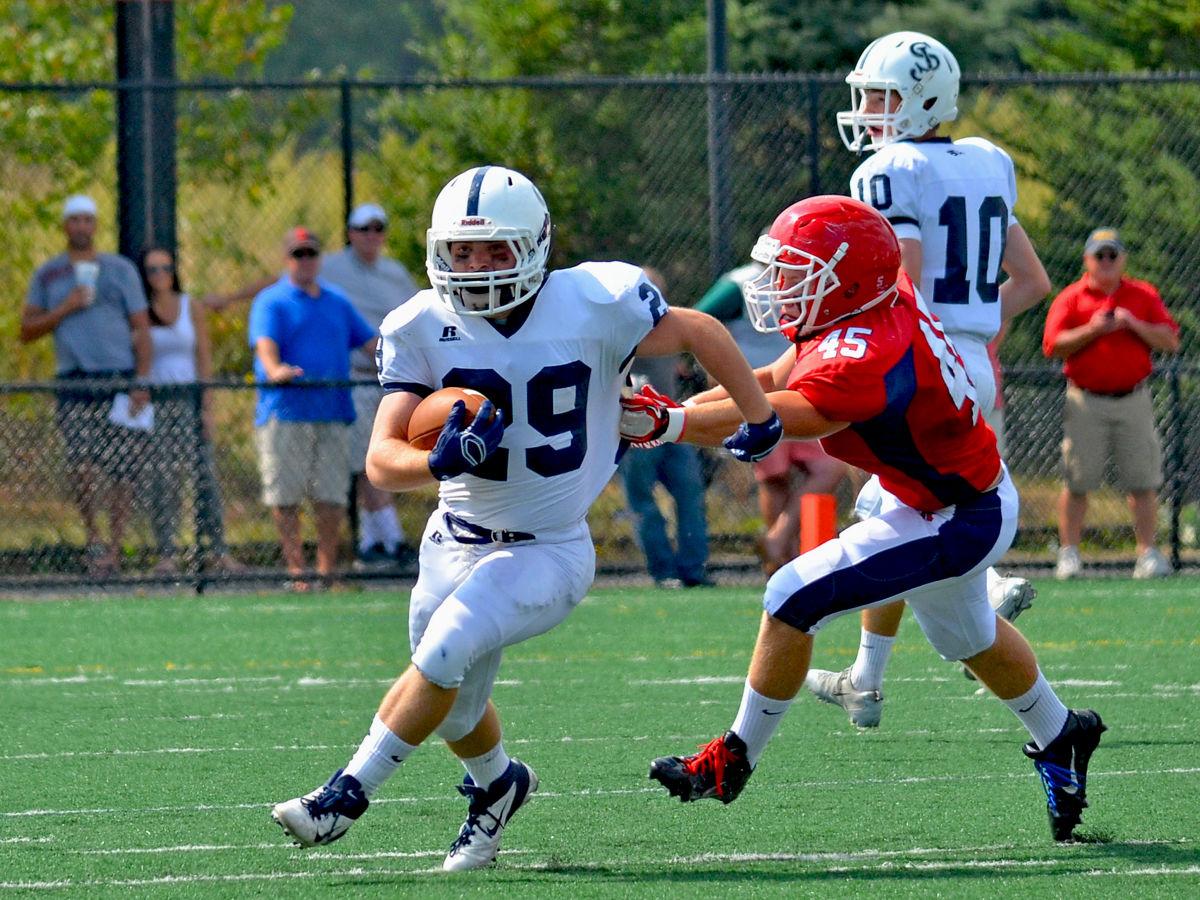 St. John's Prep running back Cody Harwood breaks a tackle on his way to some of his 142 rushing yards. 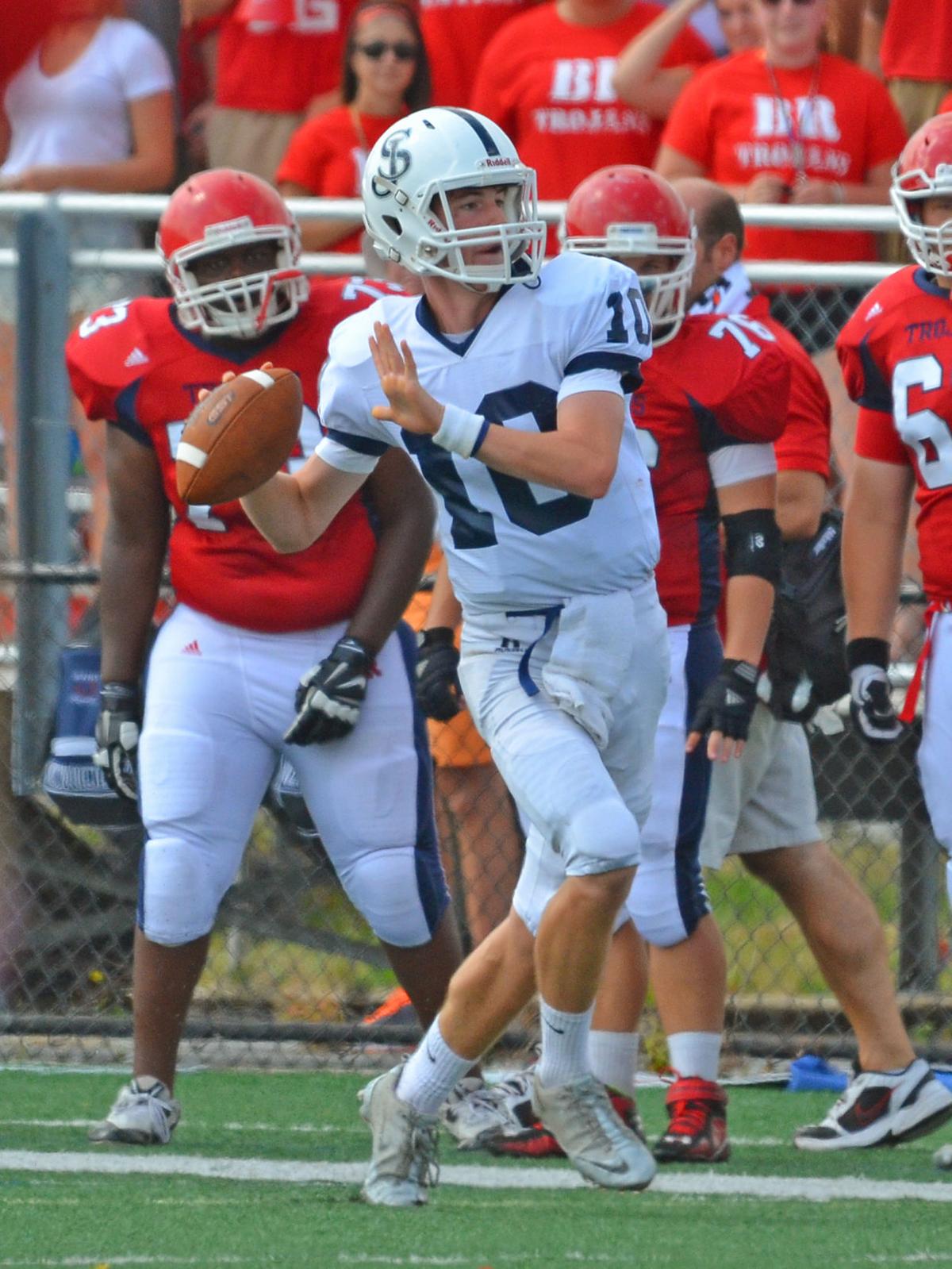 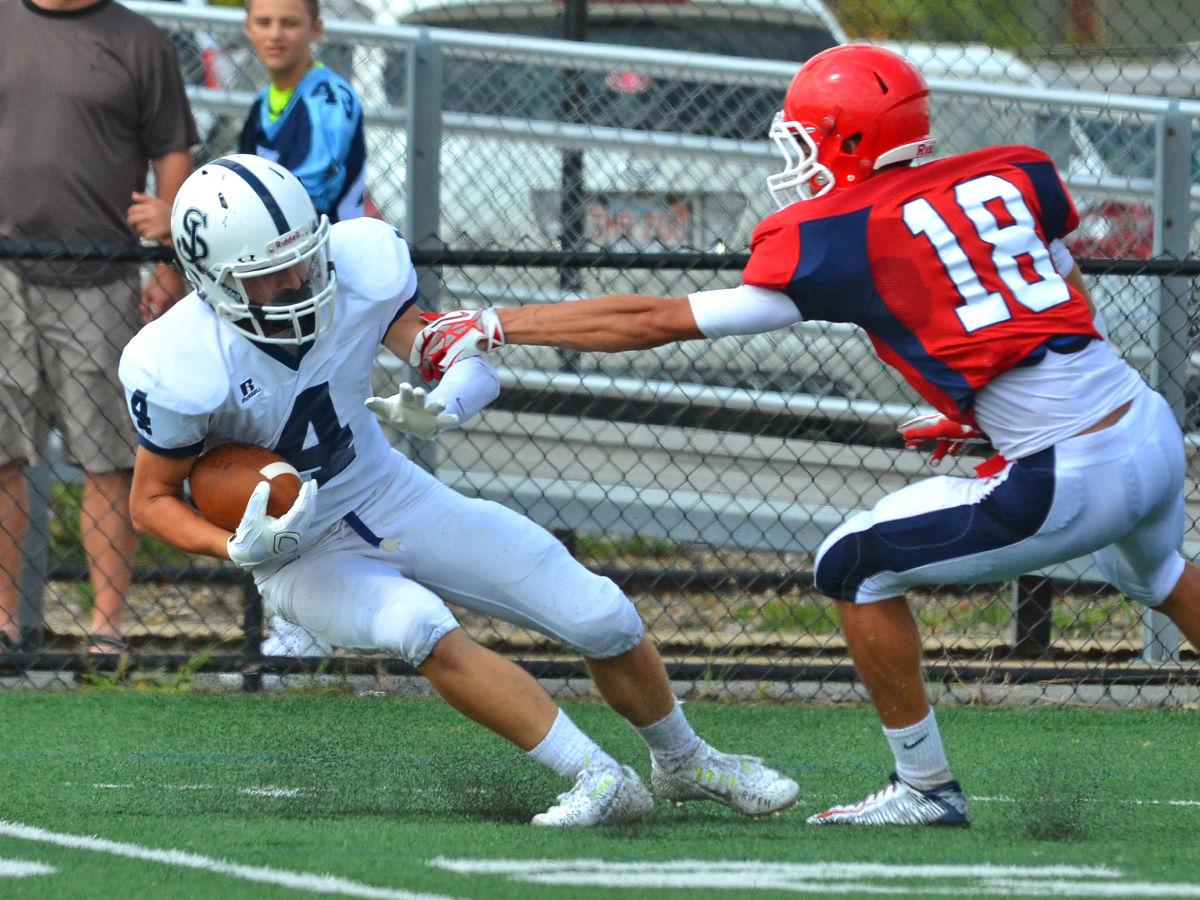 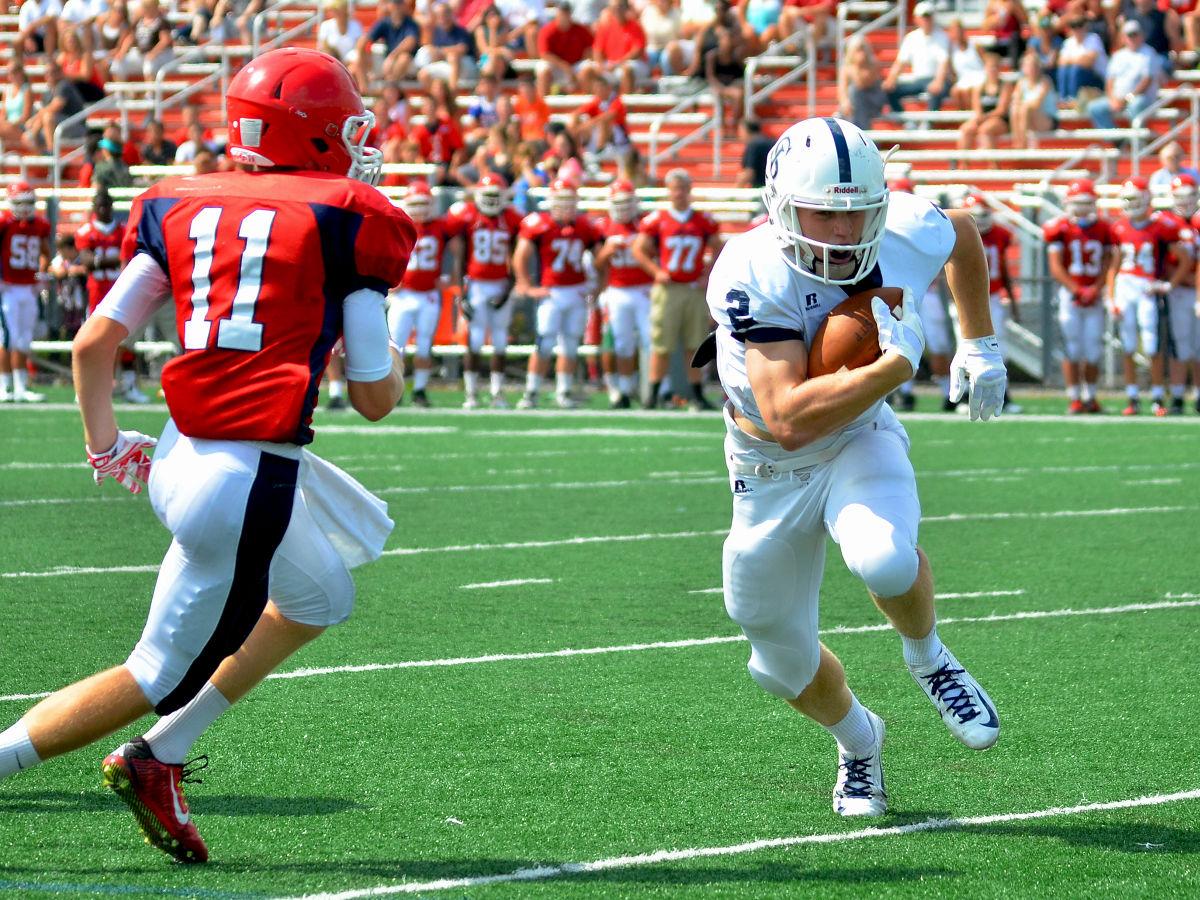 Senior Owen Rockett scored a pair of touchdowns to help St. John's Prep win its first game of the season. 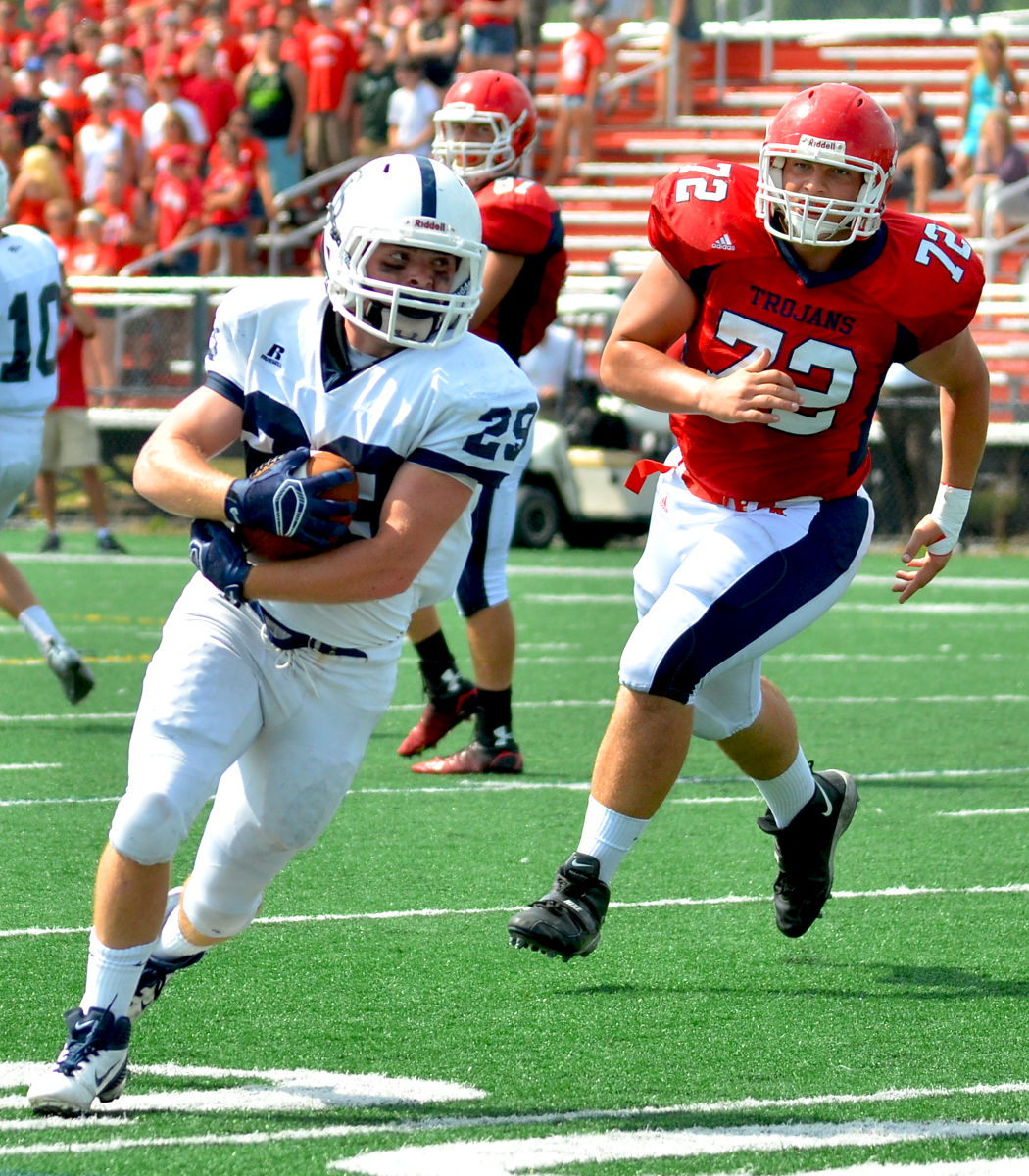 Cody Harwood turns the corner on the way to a 23-yard touchdown in the fourth quarter. 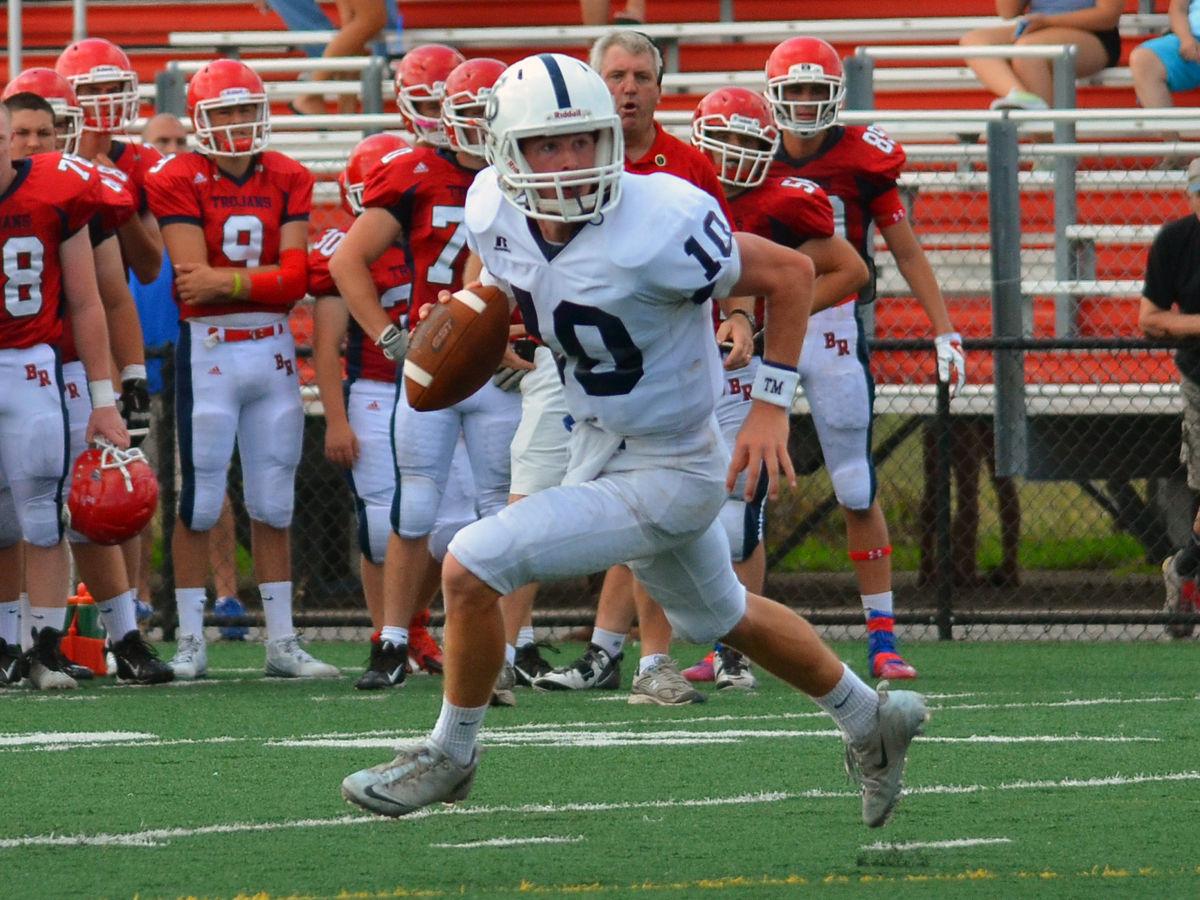 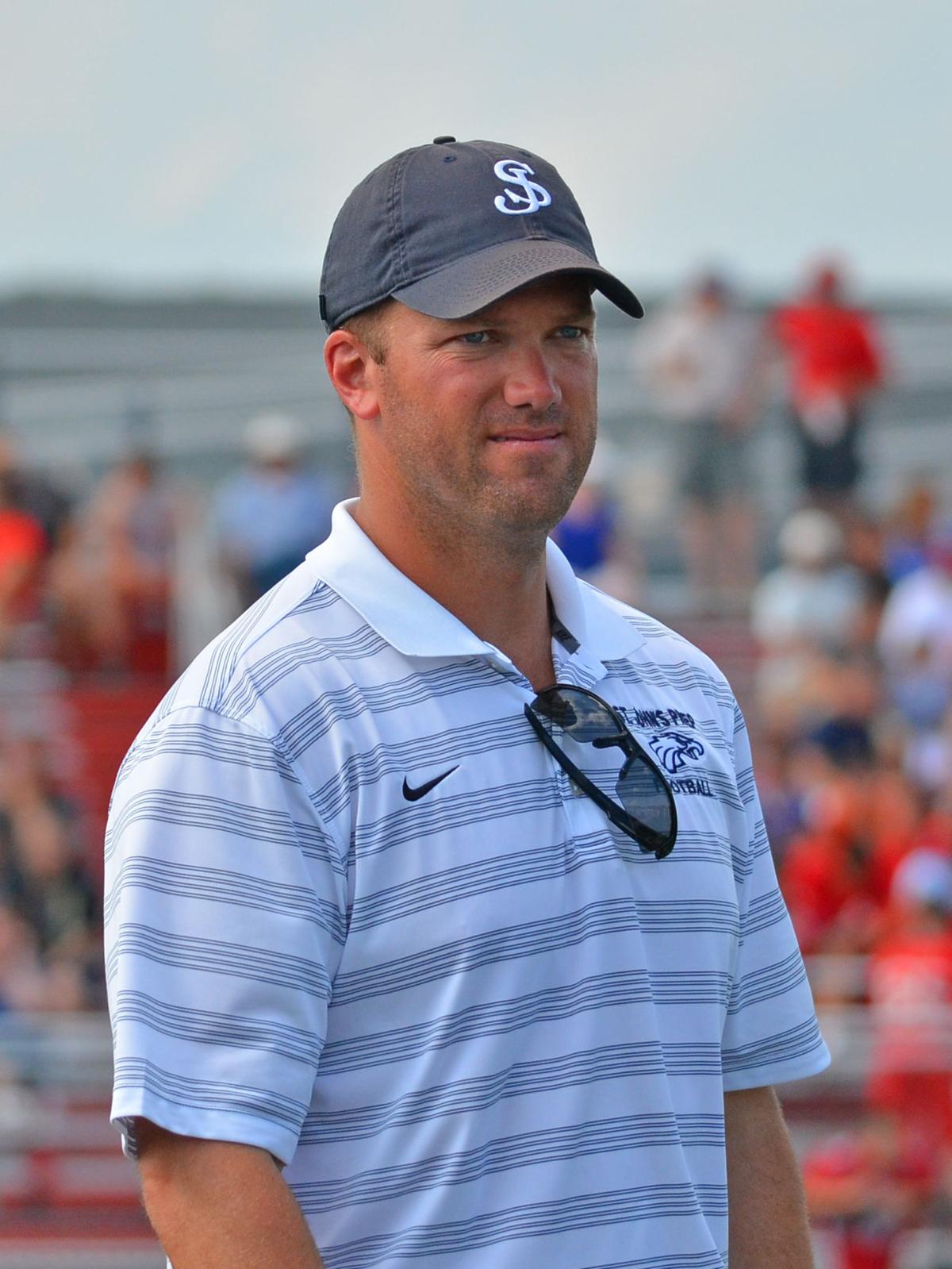 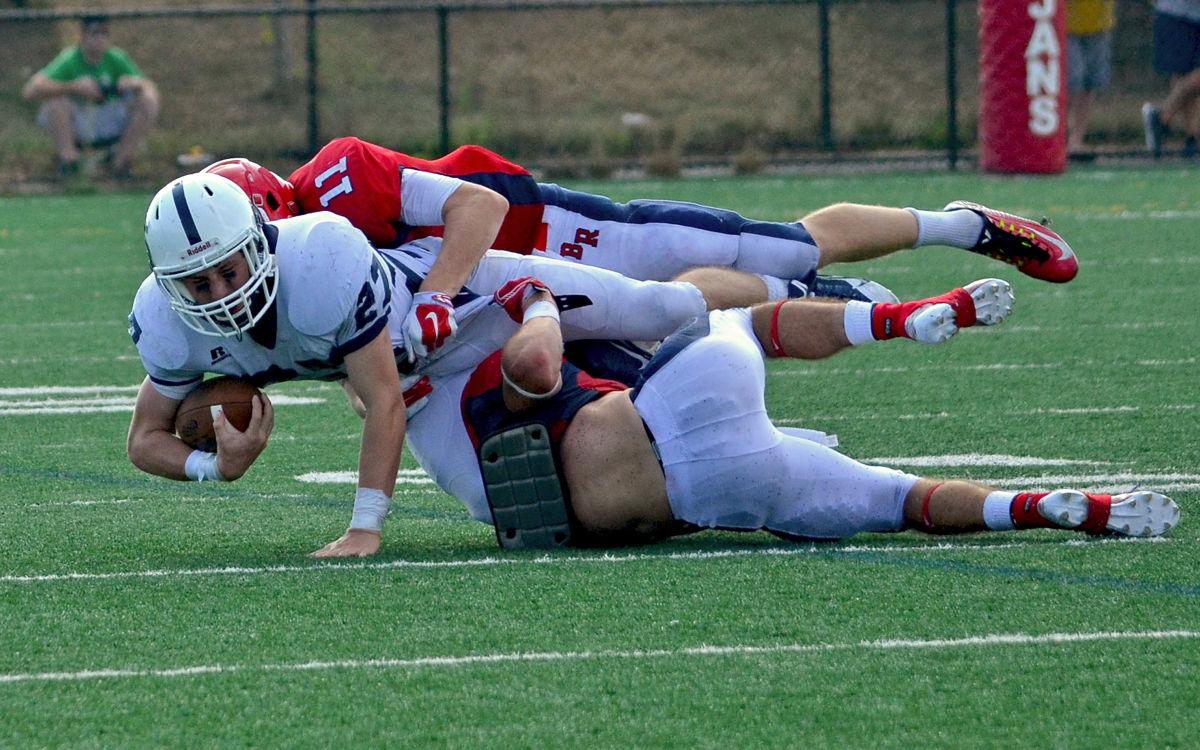 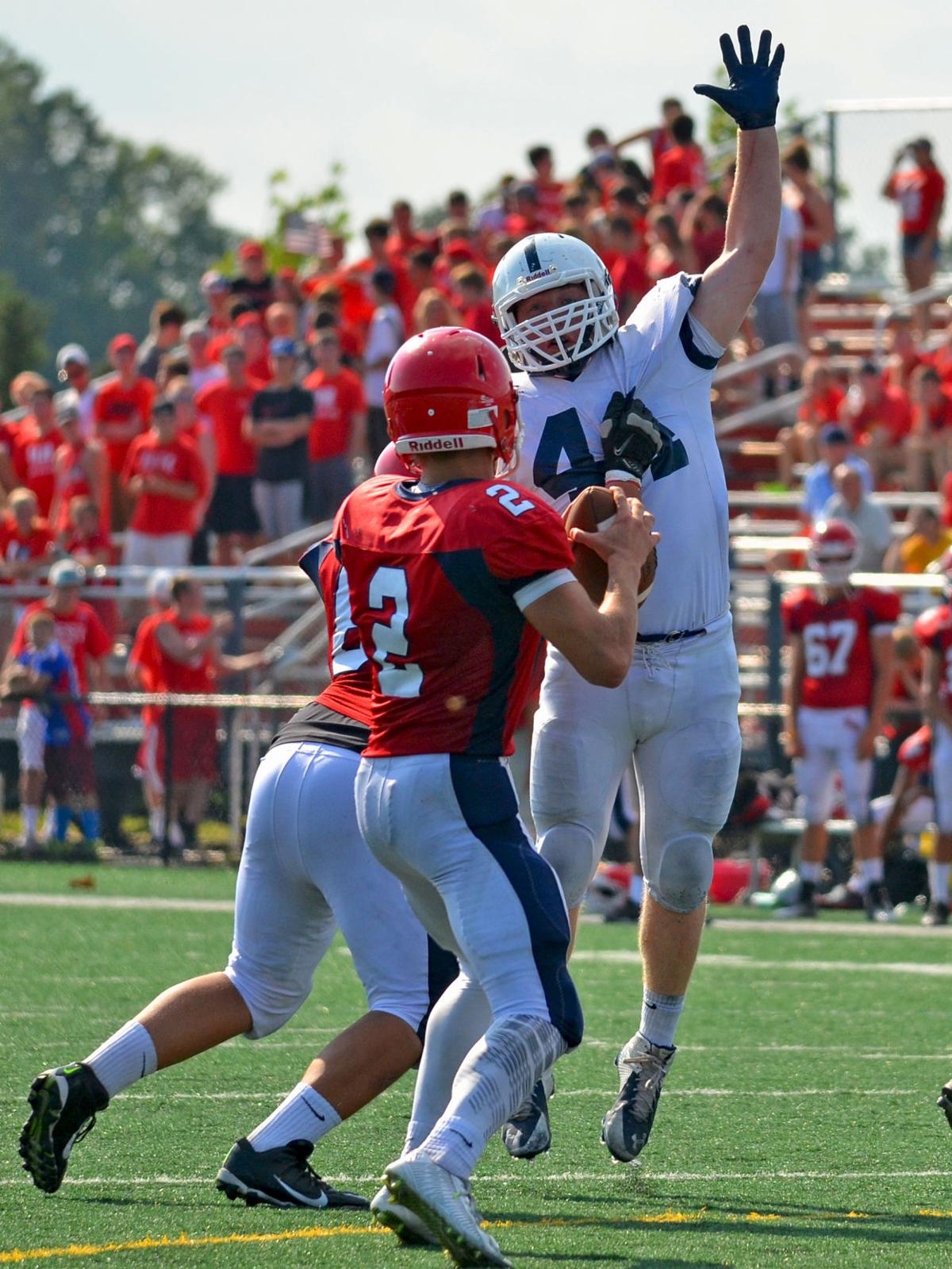 St. John's Prep running back Cody Harwood breaks a tackle on his way to some of his 142 rushing yards.

Senior Owen Rockett scored a pair of touchdowns to help St. John's Prep win its first game of the season.

Cody Harwood turns the corner on the way to a 23-yard touchdown in the fourth quarter.

BRIDGEWATER – After St. John’s Prep beat a tough Bridgewater-Raynham team, 23-12 on Saturday, first year coach Brian St. Pierre had a football tucked under his left arm as he spoke to reporters. Defensive coordinator Mike Barbati presented the ball to St. Pierre in recognition of his first win, and it will be displayed in his office.

The Eagles trailed at halftime, but methodically wore the Trojans down in the second half, outscoring the home team 13-0 in the final two quarters on a very hot afternoon. St. John’s balanced the passing and running games led by junior quarterback Oliver Eberth, who completed two touchdown passes to his favorite receiver Owen Rockett. Cody Harwood was the workhouse, rushing for 142 yards and a touchdown while Dillon Preston picked up 49 yards.

“We moved the ball consistently in our pro style offense,” said St. Pierre. “We have some things to clean up, but I liked what I saw. I have a bunch of hard working kids, who really like football; that’s what I want to have around me. Getting a win like this to open the season, it couldn’t be any better.

“Barbati does a tremendous job with the defense. We ran to the ball, were active, and tackled well. I worked them hard in the pre-season, and they’re in great shape which helped on a day like this. We played with great energy against a very good team.”

B-R (0-1) got on the board first, going 80 yards culminating with Matt Reagan catching the first of two TD passes from QB Matt Clement. The Eagles (1-0) answered right back when Justin Foley nailed a 31-yard field goal after a holding call against St. John’s wiped out a run into the end zone by Preston.

Clement found Reagan for a 56-yard touchdown up the right sideline with just over six minutes left in the half, but once again the extra point failed, 12-3. The Eagles came right back with a 71 yard, nine play drive, culminating with a 12-yard Eberth to a wide open Rockett in the end zone to close the gap to 12-10 at the half.

“This is a great way to begin,” said Eberth, a transfer from Andover High. “There are things we have to fix, but I found out during 7-on-7’s and captains practices that Owen is a great receiver.”

Eberth was 10-17 for 156 yards with two TD’s with one interception. Rockett was his favorite receiver with six catches for 75 yards. It was all Eagles in the second half, and they took the lead with 7:40 remaining in the third quarter on a 36-yard strike from Eberth to Rockett, 16-12.

The final drive was 87-yards on 14 plays with Harwood (22-142) crashing in from 22 yards out with just under eight minutes remaining.

“The holes were there all game,” said Harwood. “The line did a great job.”

The Trojans were shut out in the second half with just three first downs. The defense stepped up led by Jack Lambert, Art Churchwell, Alex Cormier, James Carnevale, and Brandon Kahari.

“Eberth has great mental toughness,” said St. Pierre. “He’s Joe Cool out there whether he throws a touchdown pass or an interception; nothing bothers him. I liked the way we mixed up the pass and run. I know I’m following a legend (Jim O’Leary), and the bar is set pretty high so I do feel pressure, but this is where I feel I belong.”

On Football: Trench domination nothing new for ‘Saint’ John’s

BRIDGEWATER — The more things change, they more they stay the same.