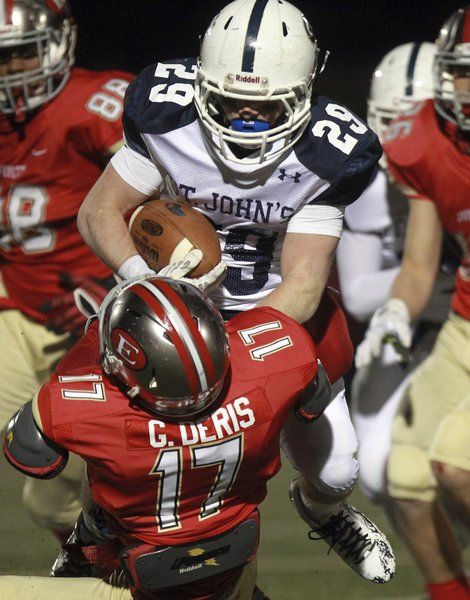 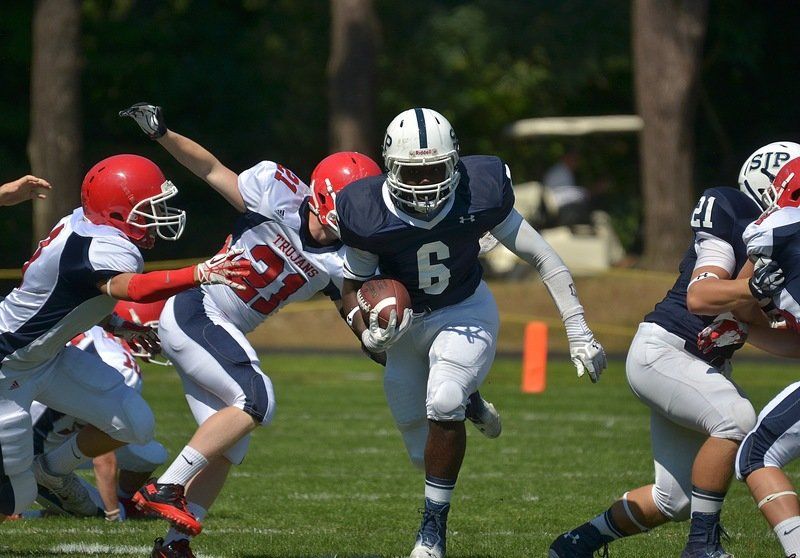 Rose Raymond file photoBrandan Kahari was a two-year starter on defense at St. John’s Prep and will be playing his college ball at Hobart.

Rose Raymond file photoBrandan Kahari was a two-year starter on defense at St. John’s Prep and will be playing his college ball at Hobart.

St. John’s Prep senior Cody Harwood had to patiently wait his turn behind Johnathan Thomas for almost three years, but when he got a chance to be the featured running back at the Prep he made the most of it. Harwood, who is from Gloucester, was a Catholic Conference all-star, and will be in the backfield for St. Anselm the next four years.

His teammate Brandan Kahari, an outside linebacker/safety, also intends to play at the next level and is heading to Hobart.

Harwood, who had 11 TD’s and rushed for 1,338 yards last season, made a list of schools he was interested in and set out to visit Ithaca, Union, Assumption, Merrimack, and Springfield.

“I set up a bunch over over-nights to see all the schools and get a feel for what it would be like,” he said. “When I went to St. Anselm I saw how I would fit in. The love and respect I got from the kids that were my hosts was great. The coaches said the best player plays, no favoritism shown. You go in and earn your spot. I liked the coaches, and they run the ball a fair amount. They recruited me, came down to school, and then stayed in contact.”

Harwood has a 3.5 GPA and plays to major in political science or history with the intention of going to law school. He is working hard to make sure he reports in the best shape possible.

“I used to play baseball and basketball before deciding to concentrate on football,” he said. “I do extensive weight and speed training at a gym Monday through Saturday and only take Sundays off. That has helped with my speed and strength; it made a huge difference at running back. I’ll keep doing it and be ready when I report this summer.

“Knowing where I’m going to play is a big weight off my shoulders. I’m the oldest in my family, and the recruiting process was very stressful. I’m glad it’s behind me. The campus there is beautiful, and while I’ll be away it’s not too far from home.”

Eagles’ coach Brian St. Pierre expects both Harwood and Kahari to do well at the next level.

“Cody is a kid who maximized his senior year,” said St. Pierre. “He had to back up Johnny Thomas; but when he got hurt (Harwood) was ready. He got his break and took full advantage of it. He was our workhorse, and I think St. Anselm is a great fit. He knows what it takes, and the competition will be excellent. He’s a hard worker and a kid everybody likes.”

Kahari was one of the leaders of a defense that helped the Eagles reach the Division 1 North final in the state playoffs.

“Brandan battled injuries all year, but he’s talented and athletic. He was heavily recruited by Division 3 coaches, who really like his versatility,” said St. Pierre. “Hobart has been one of the top D-3 programs the last couple of years, and I think it’s a perfect fit for him.”

When Kahari, who is from Lynn, made his official visit in January he fell in love with the school in upstate New York. He also likes the fact that the Statesmen play in the Liberty League and see good competition every week.

“Hobart came to visit St. John’s, but I didn’t see them that day. I had been looking at some NESCAC schools, but they reached out to me, and I went to see the school. I already know somebody on the team that I grew up with. I plan to major in business, and they told me they want to use me at outside linebacker,” said Kahari, whose older brother Gerald was a standout at the Prep and now plays at Wager. “That’s my natural position, although I did see some time at safety to fill in when there were injuries. I’m really looking forward to going to playing there.”