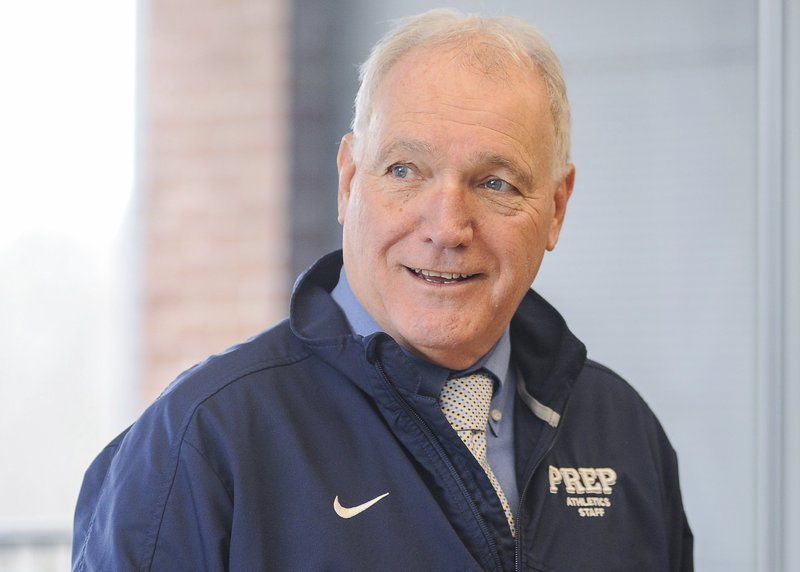 JAIME CAMPOS/Staff photo Jim O'Leary is replaced by Jameson Pelkey of Georgetown as the new athletic director for St. John's Prep in Danvers. 2/12/2019 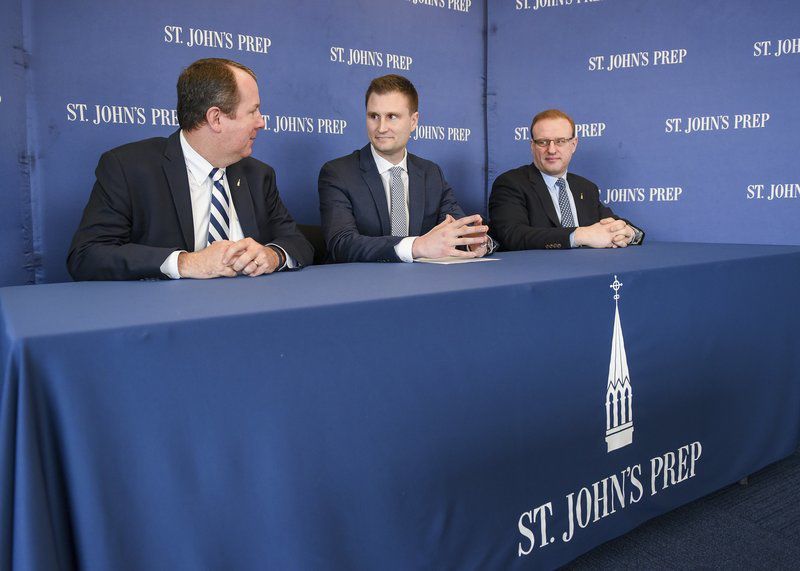 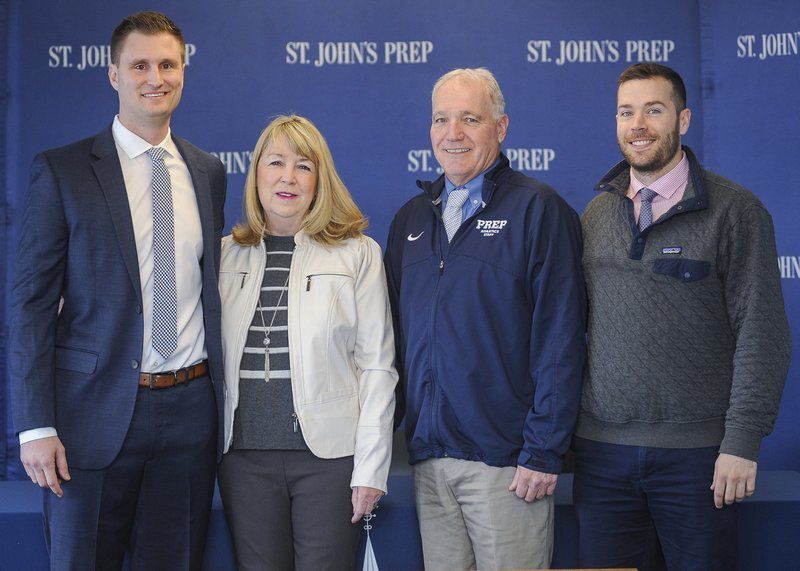 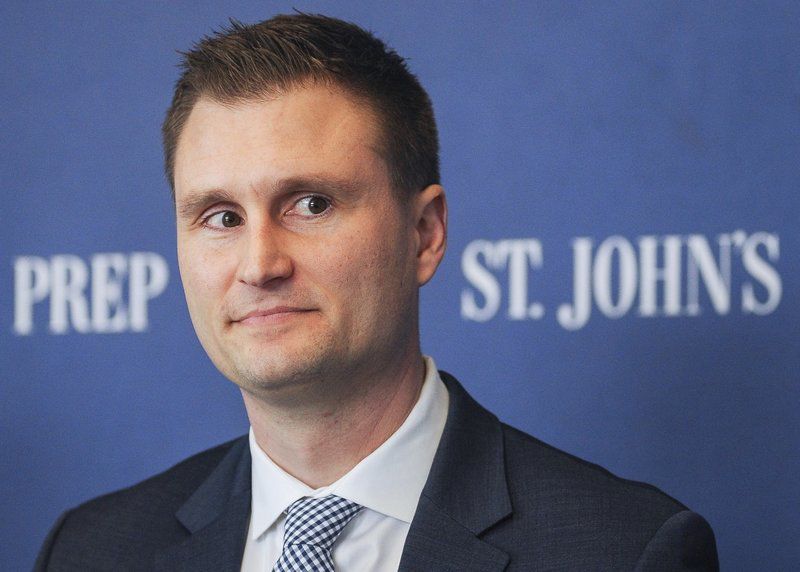 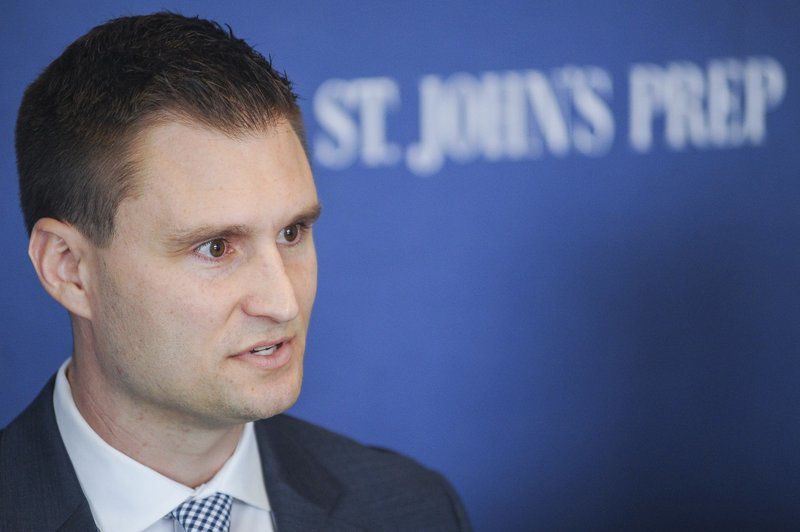 JAIME CAMPOS/Staff photo Jim O'Leary is replaced by Jameson Pelkey of Georgetown as the new athletic director for St. John's Prep in Danvers. 2/12/2019

DANVERS — St. John's Prep didn't have to look far to find the best candidate to replace Jim O'Leary, who is retiring as athletic director on July 1. The school conducted a search and discovered the best candidate was already on board: Georgetown resident and Eagles' assistant AD Jameson Pelkey has been named to succeed O'Leary.

Pelkey was introduced to the media in the Mahoney Wellness Center on Tuesday morning, but was already a familiar face..

The Georgetown resident has been a member of the athletic staff for the past 12 years, beginning as an intern from Endicott College. O'Leary and former assistant AD Ann Edgerton liked the Vermont native so much they didn't want to see him leave.

"Jameson is well prepared for the job," said O'Leary, who will stay on as a special assistant to the principal, continue to play a key role in the MIAA, and as a game administrator. "When Jameson's internship was over we wanted to keep him on campus, and he's done it all here. He coaches a couple of sports, works the summer camp, and put together the middle school program.

"It's similar to the process I went through with Fred (former AD Glatz). In 1984 when I became the head football coach I worked in the same office with Fred and kind of morphed into his assistant AD. He mentored me, and as the years have gone by responsibilities have grown. Jameson is well prepared to do a great job."

Headmaster Edward Hardiman praised O'Leary, and what he has meant to the Eagles sports program. Keith Crowley, principal and associate head of school, also thanked O'Leary for his service through the years which will not end but his role will transition. Crowley said there were many candidates for the position.

"Jameson was by far the person who stood out for his commitment to the school and students," said Crowley. "He has played an integral part in our athletics program since he first came to St. John's.

"His experience as an administrator and coach, the positive relationships he's built within the Prep community and with other schools, and his commitment to our mission and values make him a natural fit to become the Prep's next athletic director. This is an important role at St. John's, and I have every confidence in Jameson's ability to lead our program forward."

O'Leary noted when he became AD back in 1999 the Prep had 60 coaches. That number has grown to 130 with over 70 teams, 22 varsity sports, and over 900 events per year with 85 percent of students participating in an athletic activity. Pelkey will oversee programs from 6th grade through 12th in a variety of different sports.

"I'm honored and thrilled to take over. Jim has been a great mentor and friend, and Ann was instrumental in my development," said Pelkey. "Every sport, every team is valued here; that's the strength of the program, and I'm excited for the opportunity to take a new leadership role."

Pelkey was a three sport athlete in high school, and a football player for the Gulls. He has a bachelor of science degree in sports management and a masters in athletic administration from Endicott.

"I came here 12 years ago, and never looked back," said Pelkey, whose wife Kelly was there to support him. "The Prep community has a huge support system of teachers, coaches, staff, and student-athletes. It's a very welcoming feeling, and Prep graduates come back all the time. Pat Connaughton (Milwaukee Bucks) will be here for a clinic on Monday. He just comes in, and you'd never know he's in the NBA now; a great example of alumni returning to help out.

"The job has grown so much over the years, and we couldn't do it without Jordan Edgett (assistant AD), our two trainers Brian Corbett and Kyle Hicks, our equipment manager Joe LoRusso, and so many others."

Pelkey said he is committed to upholding the standard of excellence at SJP and helping athletes be successful not only on the field but in the classroom and beyond.