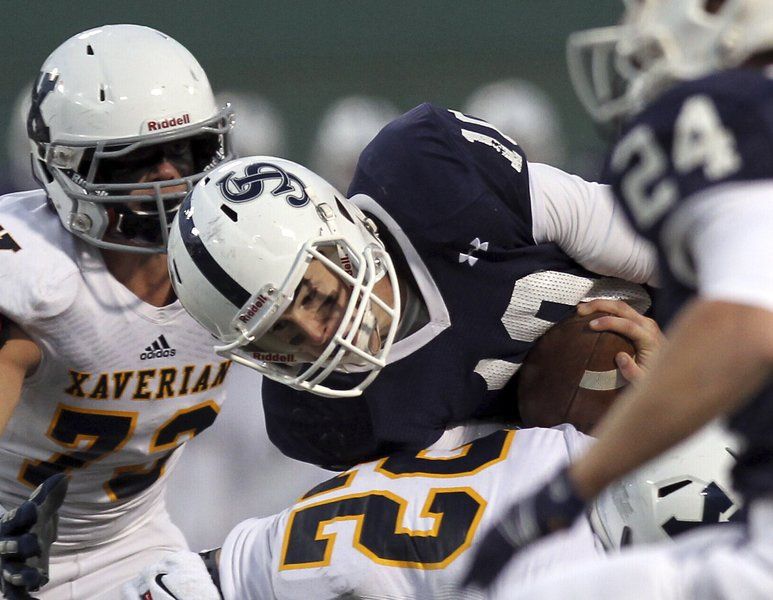 DAVID LE/Staff photo. Ollie Eberth of St. John's Prep is as tough a runner as he is throwing the football, and he'll play at Amherst College next year in the prestigious NESCAC. 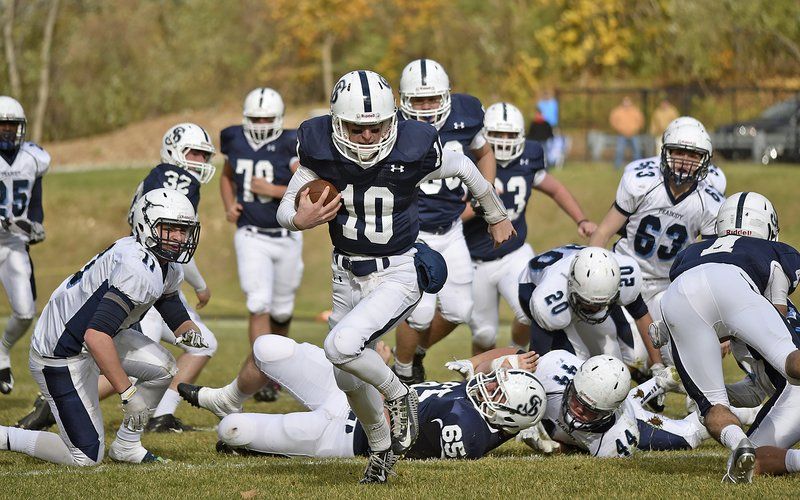 DAVID LE/Staff photo. Ollie Eberth of St. John's Prep is as tough a runner as he is throwing the football, and he'll play at Amherst College next year in the prestigious NESCAC.

Oliver Eberth found the winning combination of a strong football program and top academic school in Amherst College. The St. John's Prep captain and quarterback decided to end the recruitment process by committing to play for the Lord Jeffs, one of the top Division 3 programs in the nation.

"It's a great fit for Ollie," said Prep football coach Brian St. Pierre. "He was their No. 1 recruit, and they showed him a lot of love. Amherst is one of the top five in the country for academics; he couldn't go wrong. It's a perfect fit for him, and I think he will do great things there.

Eberth, the Catholic Conference Offensive Player of the Year and Salem News all-star, put up some great numbers with the Eagles in two years calling the signals after transferring from Andover High. This past season he threw for 1,548 yards and 13 touchdowns while running for 797 yards and 10 TD's on 106 carries. He could beat opponents with his accurate passes or call his own number and run for first downs.

"He had some other very good options. Yale was serious about him, and he had a full commitment for a spot on the Colgate team. He's excited, and we're all excited for him," St. Pierre added.

Eberth broke a lot of records held by St. Pierre, who went on to have an outstanding career at Boston College and played in the NFL for 10 years. Nobody was happier about that than his coach.

Amherst is a powerhouse, the top team in NESCAC. The team is coming off a perfect 8-0 season, with Pingree grad Kenny Adinkra as their leading rusher.

"It was a difficult decision, but I believe Amherst is the best choice for me both academically and athletically," said Eberth. "It's one of the best football programs in NESCAC, and I look forward to contributing."

Eberth went into the college football process with his eyes open. A great academic institution was his biggest priority.

"It's good to have the recruiting process behind me. I'm a 6-foot-2, 182 pounds soaking wet quarterback from Massachusetts. It's not like I was a five star recruit," he said. "I went to a football camp at Yale this past summer, and they showed some interest. It picked up lately, and I had been planning an official visit, but they needed more time to finalize things. Colgate made me an offer, too, but I decided to stick with Amherst."

Sophomore Reece Foy from Hawaii was the Amherst QB this past season, and former St. John's Prep player Anthony Bongiorno is a junior tight end.

Eberth threw four touchdown passes of 50 yards or longer for the 8-3 Eagles. When the offense struggled he took the team on his shoulders. That was never truer than in the playoff game against Everett when he did everything he could to try to pull out a victory.

He is also a star in the classroom with a 4.25 GPA, and is undecided whether he will major in finance or medicine.

"I know those are totally different fields," said Eberth. "My mother's side of the family is in medicine, and my father's side in finance. I haven't decided which way I'm leaning yet. I plan to rest up until after Christmas break, and then work out hard. I want to pump up to 195 or 200 pounds before I try to compete for a job at Amherst. The trick is trying to keep my speed and put on some weight that I'll need for college ball."