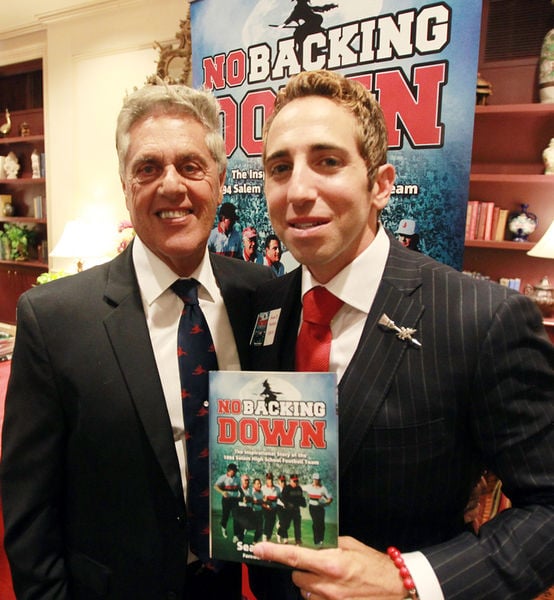 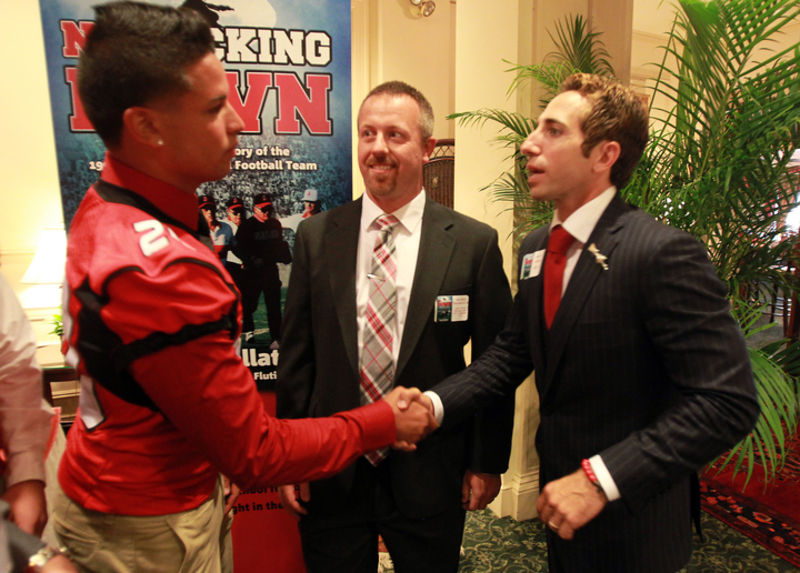 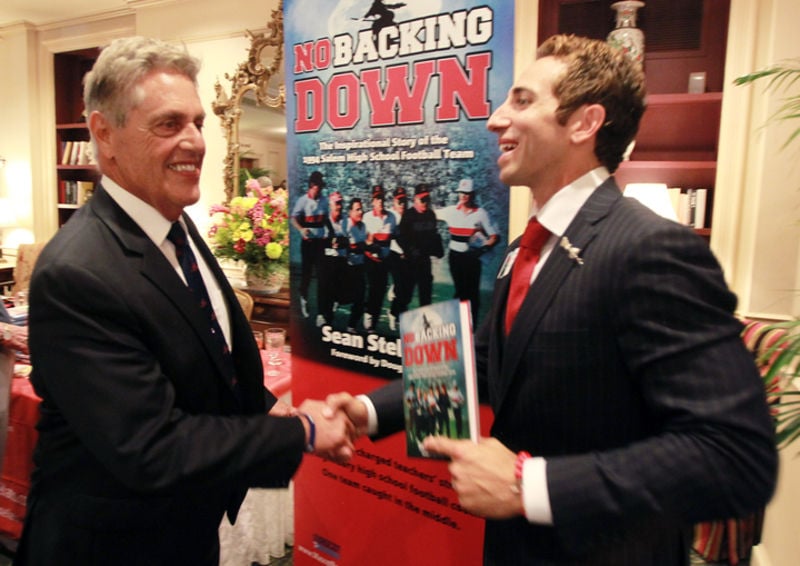 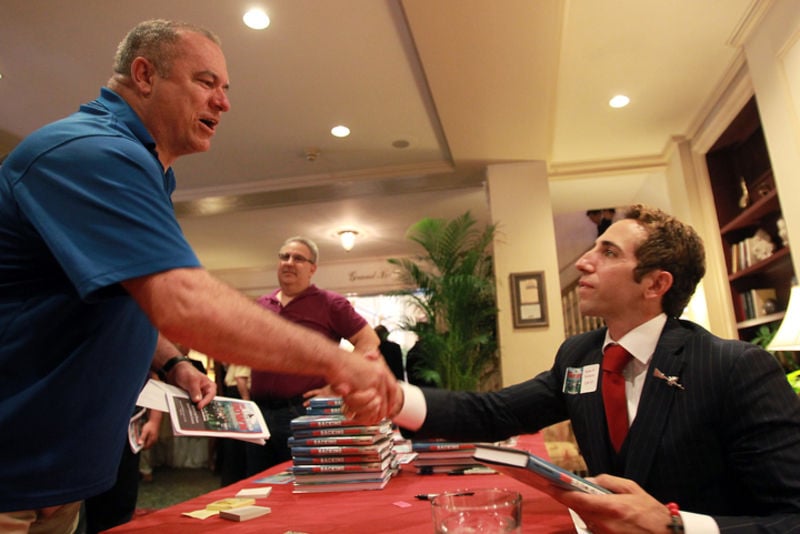 John Jodoin of Salem shakes hands with NFL Agent Sean Stellato, of Peabody, at a gala and book signing for Stellato's new book "No Backing Down" a book on the 1994 Salem High School Super Bowl football team. DAVID LE/Staff photo. 7/11/14. 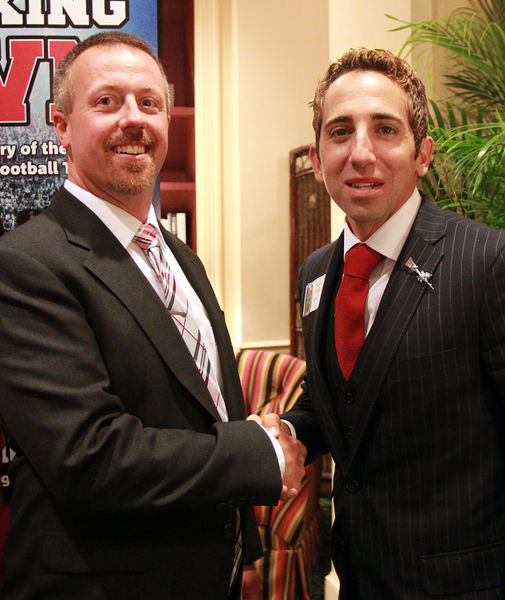 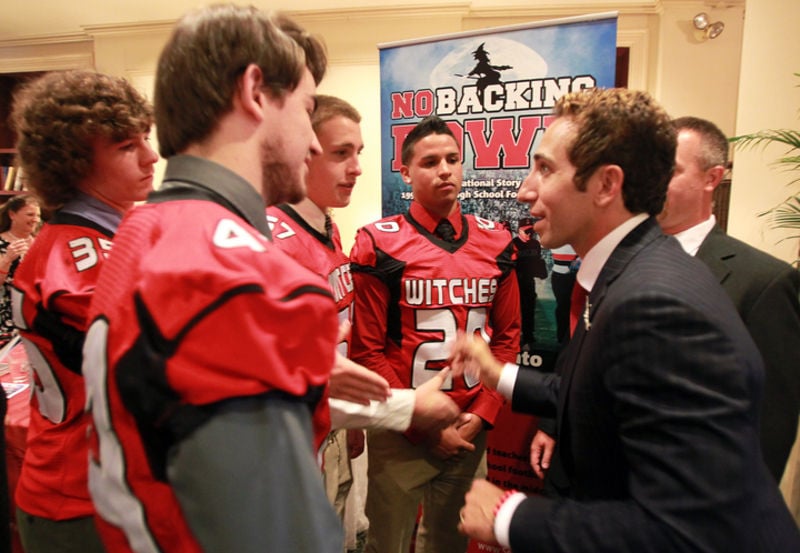 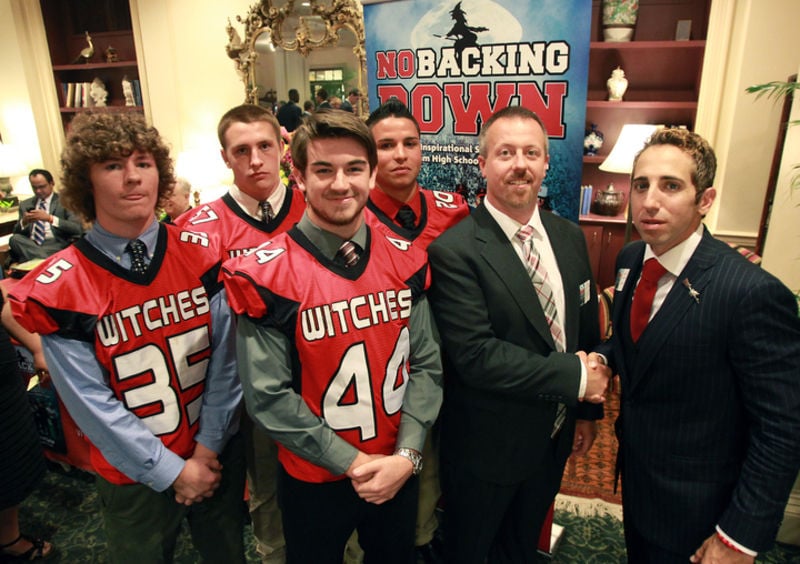 John Jodoin of Salem shakes hands with NFL Agent Sean Stellato, of Peabody, at a gala and book signing for Stellato's new book "No Backing Down" a book on the 1994 Salem High School Super Bowl football team. DAVID LE/Staff photo. 7/11/14.

SALEM — Young and old flocked to the gala at the Hawthorne Hotel last night to celebrate the release of ‘No Backing Down’, the book by Sean Stellato chronicling Salem High School’s 1994 Super Bowl season.

It seems fitting that the book is coming out during the 20th anniversary of that tumultuous season, which involved controversy surrounding a teacher’s strike in Salem that threatened to derail the Witches’ football season. Stellato, now an NFL Player Agent, was the quarterback for Salem’s Northeastern Conference championship squad.

Over 400 people came to get a book signed by the local author. Current Salem High players, wearing their red football shirts, watched slides on a big screen about that season. They weren’t even born when it happened, but are learning about the tradition of the program they play for.

“I didn’t know anything about it until coach (Matt) Bouchard came down to talk to us,” said senior right tackle Riley Grondin. “He told us about Salem High and its history.”

Bouchard, the Witches’ new head coach, was a junior on that ‘94 squad who played outside linebacker. He was happy to see all his old teammates last night and to have his new team there for the big event.

“I was a junior, like Stellato, that year,” said Bouchard. “We were fortunate to have fantastic leadership on that team. Now, as head coach, this gives me the opportunity to show what Salem High football was like 20 years ago. Tradition is hard to convey, but when you see it like this it’s very powerful.”

Stellato’s book, published by Mascot Books of Virginia, isn’t just a sports story but also one of historical interest. It took him six years to compile all of the information and conduct all the interviews he wanted before he wrote the book.

Veteran Salem High football coach Ken Perrone, a teacher in the Salem school system who was ordered to cease and desist coaching his team during that ‘94 season but refused (but was fired after the season), was on hand last night.

“I hope seeing the tradition will be an inspiration to the current team,” said Perrone. “The best part for me is getting together with all my old players, some I haven’t seen in the last 20 years. They’ve come from all over the country to be here.”

The story about how the coach and his players banded together and persevered to win the Northeastern Conference title and advance to the state Super Bowl has been compared to the book/movie ‘Remember the Titans’, with many colorful characters. Former Boston College and NFL great Doug Flutie wrote the foreword, and it was endorsed by former NFL star Mark Bavaro of Danvers, legendary NFL coach Mike Ditka, 1980 US Olympic hockey captain Mike Eruzione of Winthrop, Channel 5 sports reporter Mike Lynch of Swampscott and others.

Salem Youth Football vice president Joe Estes brought his team, the Gladiators, to the event. They won a Super Bowl last season with a perfect 10-0 record.

“I wanted them to see Witches history first hand,” said Estes. “The book will be good summer reading for them to learn more about their history.”

Jim Moroney of Danvers waited in line for Stellato to sign his book. It was a line that went out the door and never seemed to get any smaller.

“I’m an old Salem High graduate, Class of ‘63,” said Moroney. “I read anything about Salem High, so I couldn’t wait to get my hands on the book.”

Several of Stellato’s pro football clients showed up to give their support. Brian Raymond, an outside linebacker for the Philadelphia Eagles, posed for pictures with youngsters.

“I grew up in Seattle and didn’t know anything about this area,” said Raymond. “Sean has done so many great things for me that I had to come to see what his hometown was like and be a part of this exciting night.”

The evening featured a 90-minute documentary, and speeches were given by Massachusetts State Representative John Keenan, Peabody mayor Ted Bettencourt, legal advisor for the book Mike Smerczynski, Perrone and Stellato. An auction of items were donated by the Celtics, with proceeds going to the Flutie Foundation, Salem High football team, Wellness Center and band.

“I am blessed, and quite honestly the outpouring tonight has overwhelmed me,” said Stellato, who thanked his wife Krista for her constant support. “I didn’t know how many people to expect; this has been unbelievable. It’s great to see so many old friends.”

As for “No Backing Down”, Mascot CEO Naren Aryal believes he has a hot read on his hands and has already had several requests for book signings.