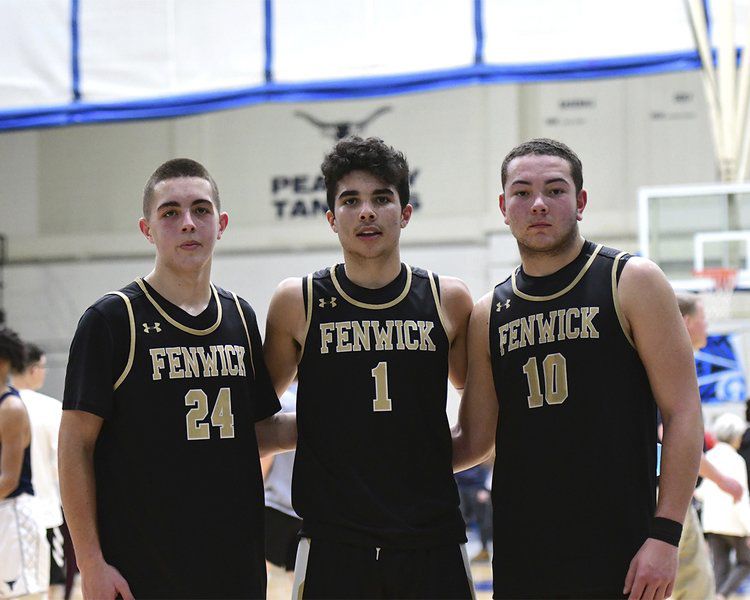 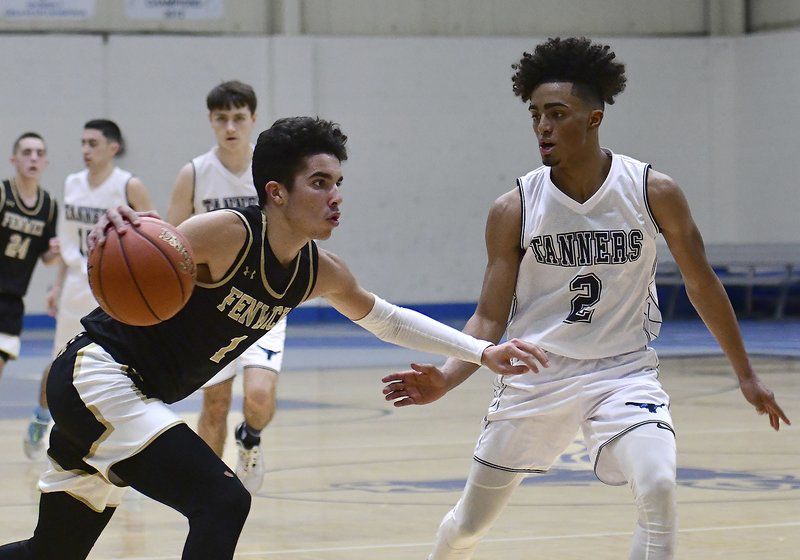 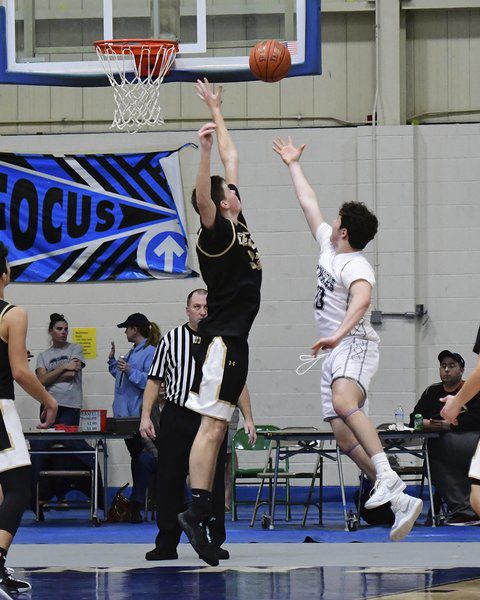 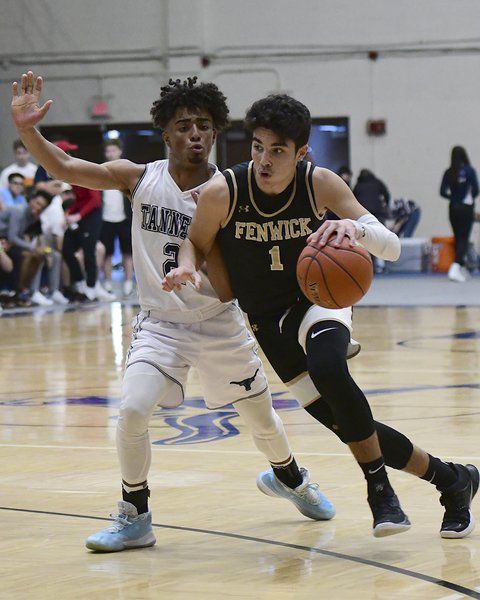 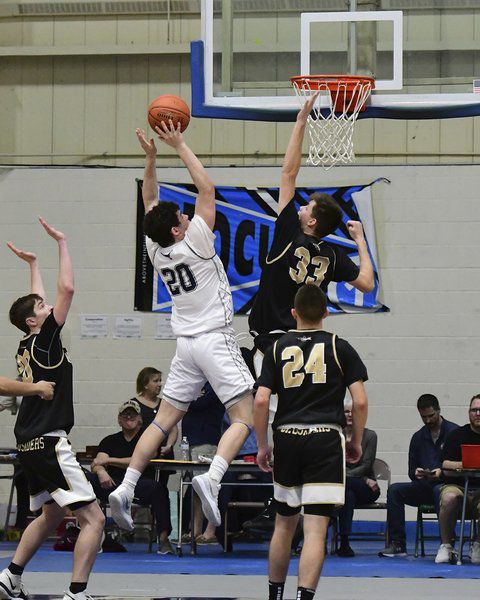 Rose Raymond/photo. Peabody's Steve Bua tries to float one up over the outstretched arm of Fenwick center Christian Loescher. 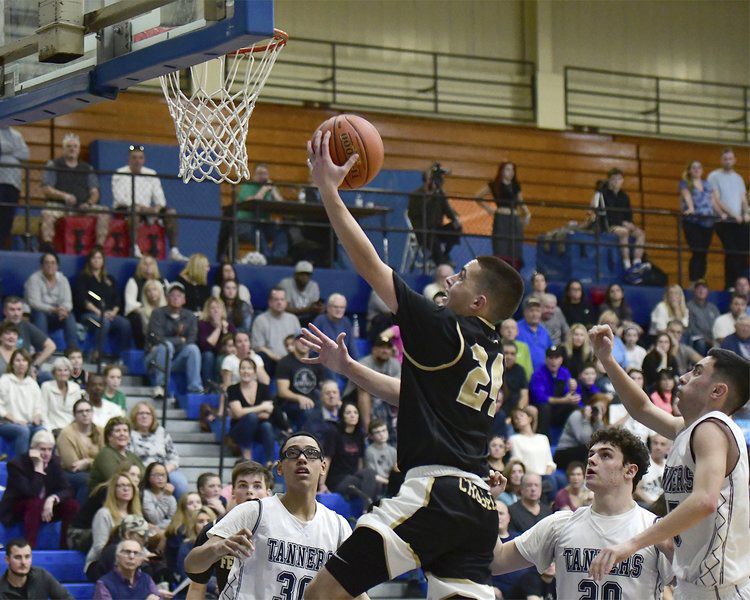 Rose Raymond/photo. Bishop Fenwick's Alex Gonzalez lays one up and in around a swarm of Peabody defenders. Gonzalez finished with a game-high 18 points to go with eight rebounds in a Crusaders win. 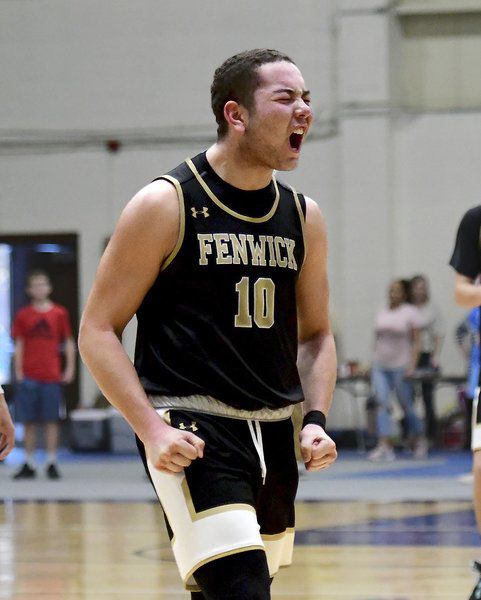 Rose Raymond/photo. Peabody's Steve Bua tries to float one up over the outstretched arm of Fenwick center Christian Loescher.

Rose Raymond/photo. Bishop Fenwick's Alex Gonzalez lays one up and in around a swarm of Peabody defenders. Gonzalez finished with a game-high 18 points to go with eight rebounds in a Crusaders win.

PEABODY — They say the first quarter is the most meaningless quarter in basketball. In some cases, that couldn't be farther than the truth.

Following a dominant opening frame that saw the Tanners nearly double up their opponent on the scoreboard, the Crusaders would own the middle periods in a big way before waltzing home with a 43-32 triumph.

Playing on the road in front of a packed and energetic crowd, Fenwick held Peabody to just six combined points in the second and third frames to seize a 13-point advantage after three. The hosts finally got a few shots to drop down the stretch, but it was too little, too late in what was otherwise a frustrating performance offensively.

"They were home and I knew they had some good shooters so (us) going into that zone gave them some looks and they attacked us," Fenwick coach Kevin Moran said of Peabody's hot start. "They definitely attacked us in the first quarter and we didn't respond as well as we should have. What happened at halftime is we kind of settled things down a little bit and spaced the ball a little bit more. You can't really force it into Jason (Romans) all the time so I think we spread the ball around nicely and that was critical to just get us some better looks."

Prior to the dramatic momentum swing in the contest, Peabody (now 4-3) could do no wrong out of the gate.

The Tanners raced out to a 15-7 advantage after one, led by Joangel Lugo's five quick points (including a triple) and a pair of rebounds. They were moving the ball well offensively and getting solid looks, while pressuring defensively, especially on point guard Jason Romans.

But for whatever reason, that play went away with the winds over the next 16 minutes of action — and Fenwick took advantage.

The Crusaders (now 6-2 on the year) outscored Peabody 8-3 in the second and trailed by just three at the break. But it was a third quarter surge that ultimately decided the contest.

Led by some terrific game management and aggressiveness from junior Alex Gonzalez (game-high 18 points to go with 8 rebounds, 2 assists and 5 steals), the visitors reeled off 17 unanswered points to pull away for good. With Romans (9 points, 3 rebounds, 5 assists, 3 steals) regularly face-guarded by the feisty Lugo or even trapped at times, Gonzalez's offensive prowess provided a much needed boost.

Peabody's only points of the third came on a 3-ball from Nick Soper with under two minutes to go in the stanza, and Fenwick's Christian Loescher quickly answered that with a one-handed slam in the lane off a nice slip pass from Gonzalez.

Gonzalez put the finishing touches on down the stretch, drilling some timely free throws, while Loescher continued to make his presence felt in the paint by using his length and athleticism to turn away shots. Loescher finished with eight points, 11 rebounds, 2 assists, 2 steals and 5 loud blocks.

"I thought our big men started to get more active as the game went on, especially Christian," said Moran. He's a great athlete and we have to get him more involved.

"But Alex was no question the player of the game. We kind of told him at halftime, 'Alex, you have to step up now, you have to be the guy that takes a little bit of pressure of Jason.' And I thought he did a wonderful job."

For Fenwick, which only played seven guys, Max Grenert hit a three and finished with five points, seven rebounds, an assist, a steal and a block; Kobe Estes added four points, five rebounds, an assist and three steals; and Jake Connolly provided some steady guard play off the bench.