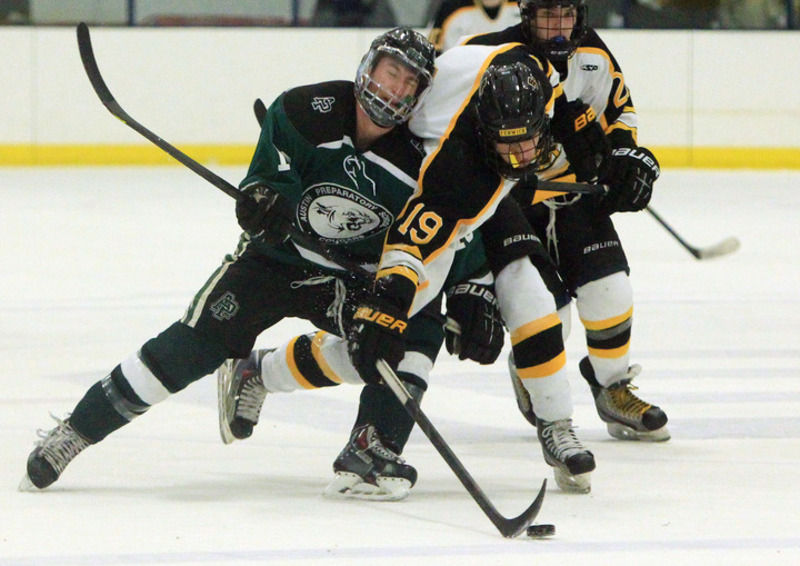 Peabody: Austin Prep junior Ryan McDonough (13) puts his shoulder into Bishop Fenwick's Chris Napolitano (19) as he carries the puck across the Cougars blue line on Saturday evening. The Crusaders fell 11-0 to the Cougars in Catholic Central League action at the McVann-O'Keefe Rink. DAVID LE/Staff Photo 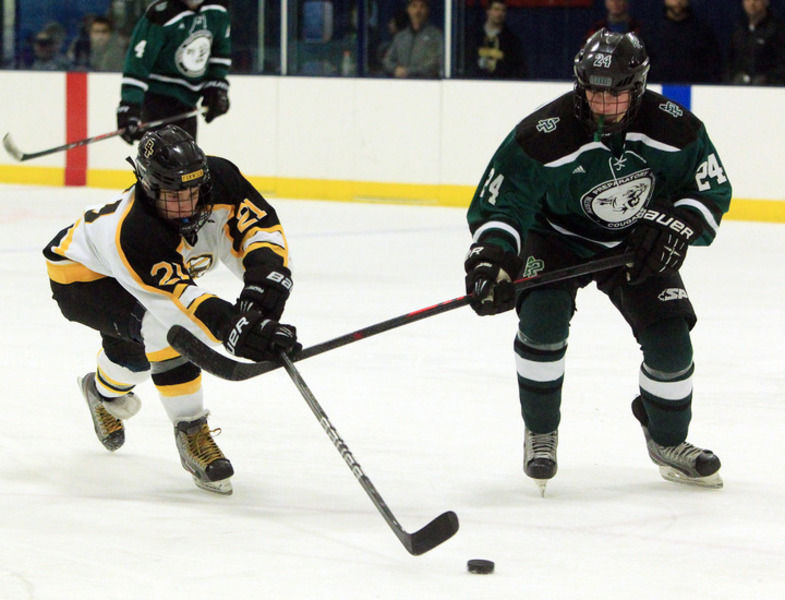 Bishop Fenwick captain Nick Finan tries to corral the puck while being stick-checked by Austin Prep's Matt Morgan last weekend. Finan hopes that better days lie ahead for his Crusaders this season. 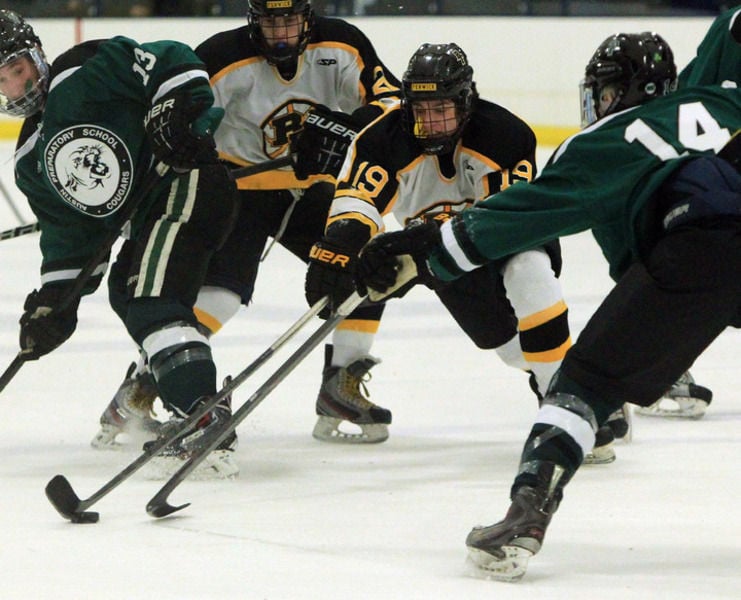 Peabody: Sophomore winger Chris Napolitano of Bishop Fenwick, shown here carrying the puck into the Austin Prep zone, is one of 13 skaters for the Crusaders who are in either 10th or ninth grade. DAVID LE/Staff Photo 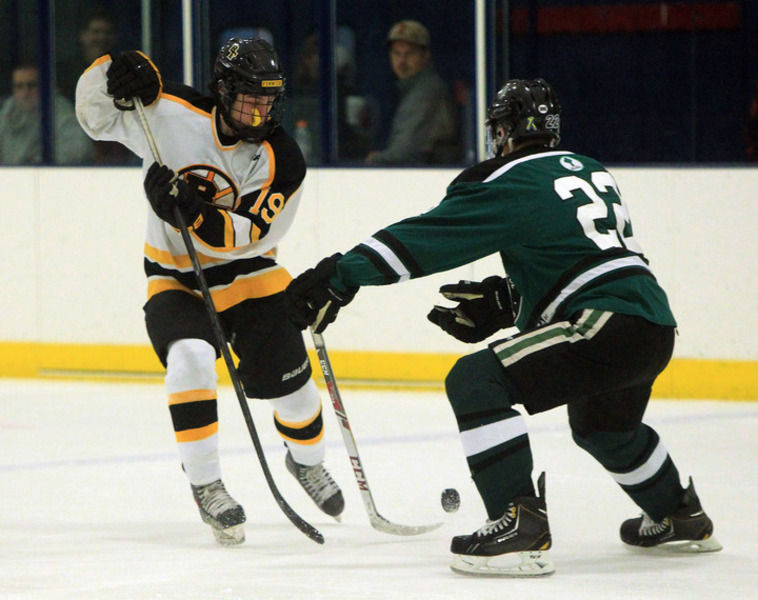 Bishop Fenwick's Chris Napolitano (left) tries to drag the puck through the legs of Austin Prep sophomore J.J. Layton of Peabody Saturday night. At 1-7 so far this winter, Napolitano and the Crusaders hope that better times lie ahead in the second half of the season. 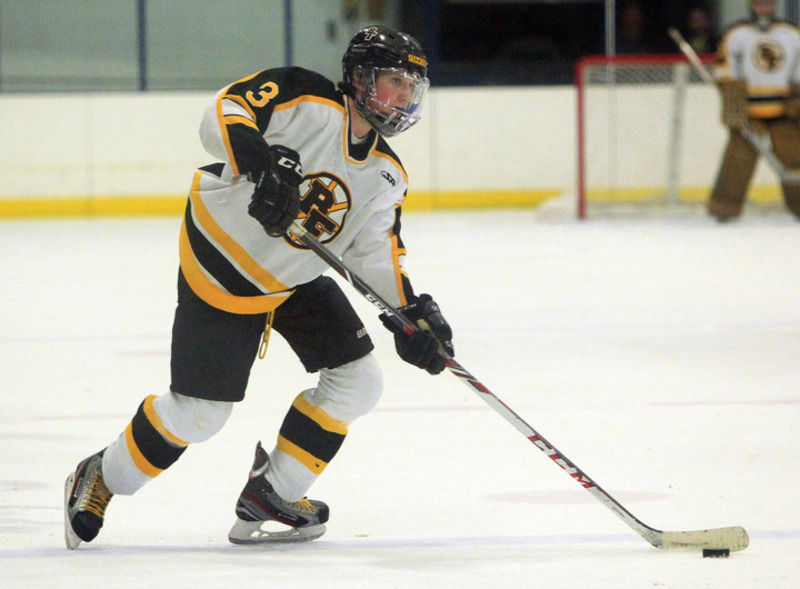 Peabody: Austin Prep junior Ryan McDonough (13) puts his shoulder into Bishop Fenwick's Chris Napolitano (19) as he carries the puck across the Cougars blue line on Saturday evening. The Crusaders fell 11-0 to the Cougars in Catholic Central League action at the McVann-O'Keefe Rink. DAVID LE/Staff Photo

Bishop Fenwick captain Nick Finan tries to corral the puck while being stick-checked by Austin Prep's Matt Morgan last weekend. Finan hopes that better days lie ahead for his Crusaders this season.

Peabody: Sophomore winger Chris Napolitano of Bishop Fenwick, shown here carrying the puck into the Austin Prep zone, is one of 13 skaters for the Crusaders who are in either 10th or ninth grade. DAVID LE/Staff Photo

Bishop Fenwick's Chris Napolitano (left) tries to drag the puck through the legs of Austin Prep sophomore J.J. Layton of Peabody Saturday night. At 1-7 so far this winter, Napolitano and the Crusaders hope that better times lie ahead in the second half of the season.

It was so quiet inside the Bishop Fenwick locker room Saturday night that when an inadvertant stick fell from a standing position onto the floor, it sounded like a boom of thunder in the hallway of McVann-O’Keefe Rink.

Players and coaches alike were stunned, shocked, dismayed and, above all else, frustrated. Losing is one thing; losing in the fashion that they did was unacceptable to everyone wearing Fenwick colors.

But if this 11-0 loss to Austin Prep was indeed the lowest point in the season for the Bishop Fenwick hockey team, there was a definite silver lining in that the only direction the Crusaders can go is up.

”What’s done is done. You can’t sugarcoat it,” said Brian Corcoran, a first line winger and senior captain from Beverly.

”I tell the boys every day that when we’re on the ice, it’s our sanctuary. Be ready to play and stay positive,” added the 17-year-old. “It’s all about the mentality you have.”

Last Saturday’s setback dropped Fenwick to 1-7 on the season. If there was ever a team that needed a nine-day layoff, it’s this club.

”Hopefully,” senior captain Nick Finan of Salem said, “we’ll have a great week of practice, then get back at it and hopefully start to turn the corner against Matignon (Monday).”

It’s been an uphill climb for the Crusaders since they became a Division 1 program for the 2011-12 season. Since that time, they’ve gone a combined 7-39-4. The wins have come against Pentucket, Lynnfield, Matignon, and twice each against Saugus and St. Bernard’s. The one point they’ve gotten against a fellow Division 1 club was a tie with Arlington Catholic in their first season.

The Crusaders have just four seniors on the roster and upwards of 13 freshmen and sophomores who see regular ice time.

“A lot of young guys leads to inconsistency. Asking a 14 or 15-year-old to match up against some elite 17 and 18-year-olds, that can be very difficult,” said Fenwick head coach Dan Lynch.

”We’re asking a lot of these young guys. But that’s not an excuse. I have to do a better job to have the whole team ready. It’s my job to have them prepared mentally and physically.”

Corcoran and Finan are the wingers on Fenwick’s top line with junior center Tim Sullivan; together, they’ve combined for 4 goals and 5 assists. The rest of the team has scored 3 goals and 3 assists in eight games. There are other forwards who show promise, youngsters like freshman Jimmy Moore and sophomores Chris Napolitano and Matt Townsend. But when offensive opportunities can’t be generated (Fenwick had a single shot on goal over the final two periods Saturday), it’s hard to see that potential.

Another example: sophomore goaltender Bobby Lombardi. He’s a lot better than his numbers would suggest; Lombardi had 12 saves in the first five minutes against Austin Prep Saturday and stays square to the shot without giving up many rebounds. But when you face 270 shots in the equivalent of seven-and-a-half games (roughly 35 per game) in front of an inexperienced defense, things can snowball in a hurry.

”We know we’re in a rebuilding phase,” admitted Finan, who was accepted into his top collegiate choice, Nichols College, over the weekend. “It stinks that it’s during our senior year, but if we can pass along the right work ethic to the younger guys, then we’ll have done our jobs as senior captains.”

Corcoran firmly believes it’s a matter of the Crusaders sticking to what works best for them. “I have faith we can play with anyone if we play our style. We have to come mentally prepared and win those 1-on-1 battles,” said Corcoran, who has already been accepted to Merrimack, Endicott and Nicols. “We’re a grinding team; we’re not danglers or guys who are going to go 1-on-1 and beat you. We have to keep grinding away if we’re going to have success.

Moving forward, Finan and Corcoran say remaining positive and believing they can be better will help Fenwick’s cause immensely. Teams that are more at Fenwick’s level, such as Matignon and St. Bernard’s, are coming up.

Lynch agrees, adding he’d like to see his team be more physical as a team and do the little things that will help create more chances offensively, such as chipping pucks by defensemen and being more aggressive on the forecheck.

”We have to learn what it takes to play at an elite level,” said Lynch. “We’re trying to be consistent. If we played every period like we did in the first (against Austin Prep), that’d be a positive step.

”But no one’s going to take it easy on us. It’s up to us to make it tougher on other teams.”

After playing 11 games in the regular season’s first 32 days, Beverly gets its first extended break by having five days off between contests.

“We get back to the (Northeastern Conference North) games this weekend, so we want to be refreshed and ready to go,” said head coach Bob Gilligan, whose team has pitched five shutouts thus far while outscoring its foes by a collective 49-12 score. “Mentally, just getting a day or two away from the grind will be good. It’ll give everyone a chance to recharge their batteries.”

Beverly (10-0-1) will have just one more home game following Saturday’s tilt, coming two weeks from today when it meets Marblehead for the third time this winter (7 p.m.) at Salem State.

Reed Foster has been one of the hottest scorers on the North Shore in recent weeks. Since New Year’s Eve, the Peabody High junior has scored seven goals in four contests, including a pair of tallies in the Tanners’ 5-3 victory over Lynn last Saturday that gave head coach Mark Leonard his 200th career win.

The 6-foot, 175-pound wing puts himself in good position in front of the net to pounce on rebounds and isn’t afraid to take a little punishement if the end result gets the puck into the opponent’s net.

”Reed goes to the spots where not many guys like to go,” said Leonard. “He takes slashes, jabs, the whole nine yards and stands his ground ... and gets goals because of it. He takes his punishment but also gets his results.”

”He’s big and so strong on his stick,” added Peabody defenseman Matt Pino.

With nine goals on the season heading into tonight’s non-league game at Weymouth (7 p.m.), Foster has scored multiple goals in three of the last four contests. He had a pair in a loss at Methuen Dec. 31, then bagged a hat trick in a home loss to Marblehead before scoring twice more against the Jets of Lynn.

When Danvers played at St. John’s Prep two nights ago in the inaugural ‘Oniontown Classic’, it was the fourth time this season that the Falcons had taken part in a game with some type of name attached to it — and they still have two more to go.

In the two days following Christmas, Danvers played in the Kasabuski Christmas Classic in Saugus, defeating Lynnfield 4-1 before falling to Melrose the following day, 3-2, in the American Division championship game. The Blue-and-White skated by Peabody, 4-3, on Jan. 4 in the third annual Mike Clifford Memorial Game as well. Still on the docket: a pair of games in the annual Newburyport Bank Ice Hockey Classic (Fournier Division) on Feb. 19 (vs. North Andover) and the regular season finale on Feb. 21 (against either Saugus or Lincoln-Sudbury).

The sixth annual Derek Hines Memorial Game will be played Saturday at the Ristuccia Arena in Wilmington as St. John’s Prep takes on Catholic Conference rival B.C. High at noon. The contest is played in memory of Hines, the Newburyport native and former SJP and West Point hockey captain who became an Army Ranger, serving his country in Afghanistan. He was 25 years old when he was killed in 2005 while on patrol for Operation Enduring Freedom.

This will be the fourth consecutive season that the Eagles will host their Catholic Conference foes from Dorchester (also known as the Eagles) in the Derek Hines Memorial Game. St. John’s Prep is a perfect 3-0 in those games, including a 3-2 triumph last January in which the hosts wore spectacular hockey jerseys adorned with red, white and blue stars and stripes.

St. John’s Prep is 5-1 all-time in these games, having beaten Woburn in the inaugural contest (6-1) and falling to Central Catholic in 2010 before starting a regular Hines Game rivalry with B.C. High.