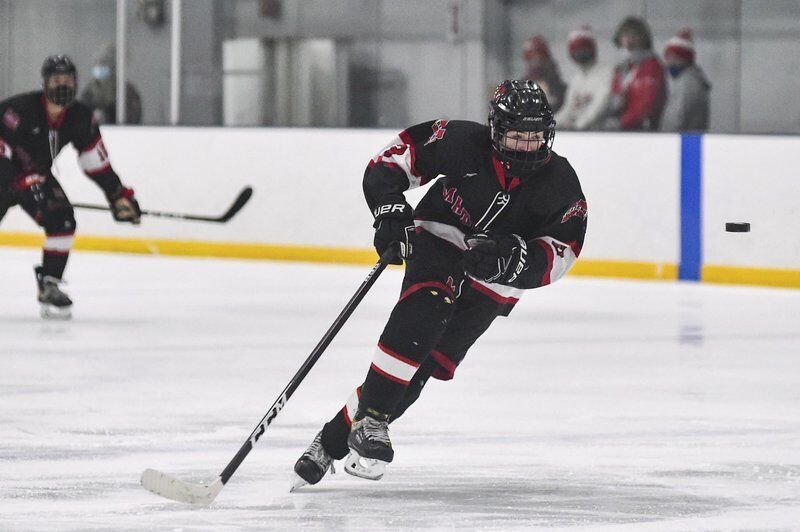 Junior center Connor Jalbert has scored five goals in Marblehead’s last three games, all of which have been wins after an 0-4 start to the season. 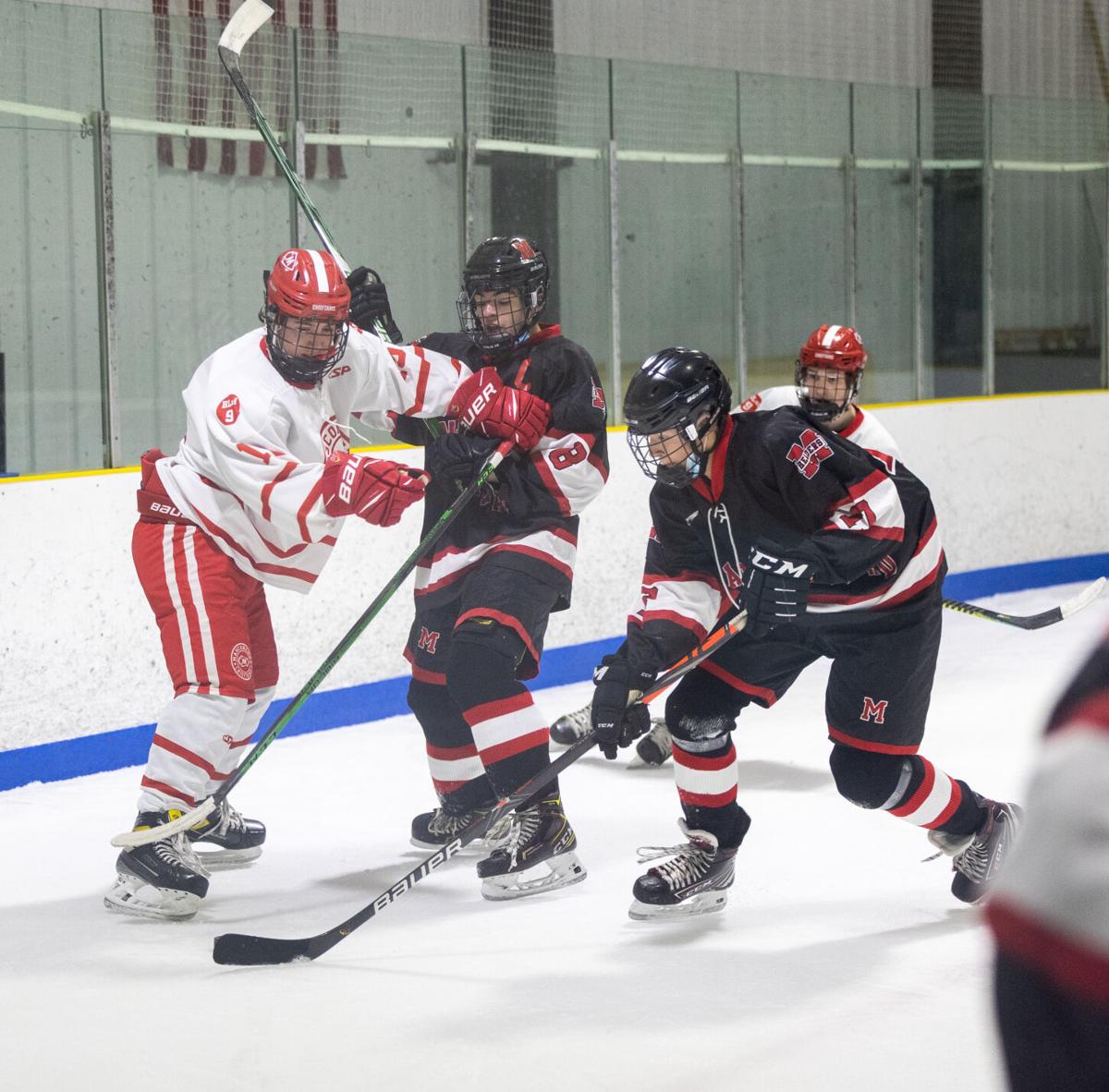 Sophomore defenseman Hogan Sedky of Marblehead (with puck) brings a physical edge along with strong puck skills to the Headers’ lineup, while captain Aidan Jalbert (background) can also mix it up while jumping up to join the play offensively. 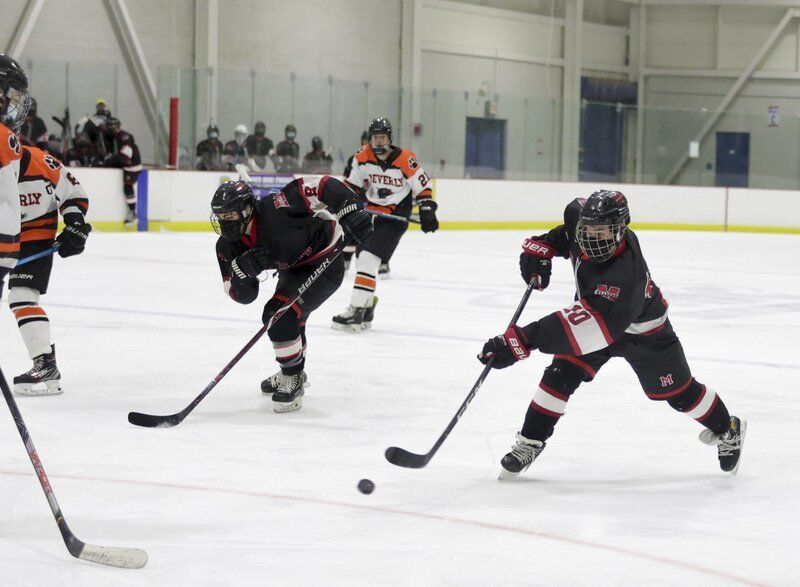 After helping Marblehead High to an undefeated Super Bowl championship season on the gridiron, left winger Eli Feingold hopes to power the Headers to similar success on the ice this winter. 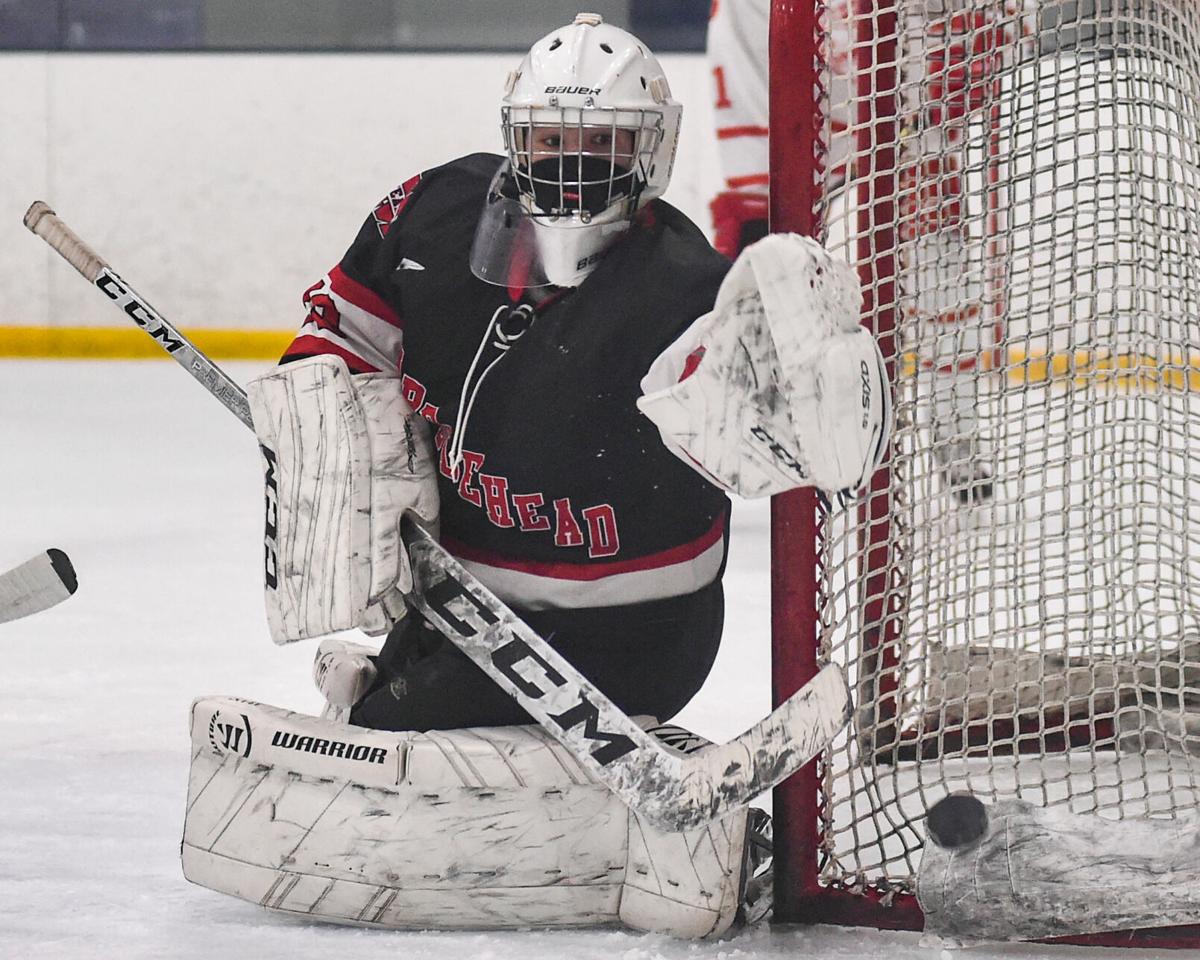 Junior center Connor Jalbert has scored five goals in Marblehead’s last three games, all of which have been wins after an 0-4 start to the season.

Sophomore defenseman Hogan Sedky of Marblehead (with puck) brings a physical edge along with strong puck skills to the Headers’ lineup, while captain Aidan Jalbert (background) can also mix it up while jumping up to join the play offensively.

After helping Marblehead High to an undefeated Super Bowl championship season on the gridiron, left winger Eli Feingold hopes to power the Headers to similar success on the ice this winter.

It was abnormal, like a cheeseburger being served with a side of Swedish fish as opposed to French fries.

Losing its opening four games of the season was just not in the Marblehead boys hockey repertoire. The Headers have a tradition of starting out fast and staying well above the .500 mark, not trying to chase it as mid-January approaches.

So when the current squad dropped four consecutive contests to begin the 2021-22 campaign, there were only two things to do: persevere and right the ship.

“I had never started out that bad since I’d been here, and it was pretty clear we all knew we needed to fix it,” said senior captain Aidan Ryan, whose Headers have won three straight while allowing just three goals combined, improving to 3-4 on the season heading into Wednesday night’s clash with Danvers.

“Once we got that first win, everything has started to click from there,” added Ryan, the team’s top line left wing. “Guys have begun to figure out their roles, and it’s given us so much confidence.”

“Our senior class has been really successful here at Marblehead, and we didn’t want to go out with a lousy season. We knew we weren’t playing up to our capabilities,” defenseman Aidan Jalbert, another senior captain, added. “Now the chemistry is better, we’re starting to connect, and the wins are coming.”

While there isn’t any one specific thing you point your Bauer Vapor-clad finger on as the reason for the team’s 0-4 start (outscored, 25-9), there were certainly lots of smaller maladies that added up.

Start with the fact that Marblehead went into its season opener against powerful Gloucester cold; it was the only team not to have a preseason scrimmage, with one scheduled against Scituate scrapped, as was the annual Salem State Jamboree. The result was a humbling 8-1 loss.

But there’s much more than that. Jalbert, Ryan and Eli Feingold were three new captains trying to fill a leadership void left behind by, most notably, two-year captain and career 100-point scorer Will Shull. There were some varsity newcomers and others with scant playing time at that level who had to quickly learn the speed, physicality and expectations.

Feingold, another left wing, was the kicker for the unbeaten Marblehead High Super Bowl championship football team with his field goal with no time left having beaten Swampscott in a Thanksgiving classic. Thus he was off the ice virtually the entire fall and didn’t skate with his teammates in the annual Dale Dunbar Camp.

The schedule was to begin the year: two games with high octane Gloucester, as well as one with defending NEC champion Masconomet and always tough Lowell Catholic in a non-leaguer.

And the goaltending, long a Marblehead strength, was simply not up to par through four games.

“Maybe a preseason game or two could’ve definitely helped,” said junior center Connor Jalbert, the team’s leading scorer with six goals, eight assists and 14 points, “but there wasn’t anything we could do about (them being canceled). The start of the season, we had to learn how to jell and play together. None of us were used to losing like that.”

So the Headers’ 4-0 win over Beverly two days after Christmas, with Connor Jalbert scoring twice and senior goaltender Nick Peters stepping up with a 22-save shutout, was cathartic. A 9-0 blasting of Saugus, with Jalbert netting three more goals and Peters pitching another shutout, got the Headers really believing in themselves, and most recently a 4-3 triumph at Winthrop, with the second of Hayden Leveroni‘s two goals being the game-winner, helped to hammer that belief home.

“I can’t tell you how different things are amongst the team now,” said Ryan, who’s also a tennis all-star for Marblehead. “The atmosphere in the locker room has totally changed.”

Aidan Jalbert, a National Honor Society student with a 4.0 GPA and who plays the viola, said he can see the Headers getting on a roll now simply because of their work ethic and talent that they possess.

“We have a really deep team, three lines we can throw on the ice at any time and be confident in,” said the 5-foot-7, 160-pounder, who has been paired with fellow 12th grader Matty Titus on the blue line recently. “If we can get production from all three lines, we’ll be a hard team to beat — especially in the third period, where we can wear teams down.”

Ryan, Connor Jalbert and Leveroni (7 goals, 3 assists) are the de facto first line, a fast, physical unit that has scored 10 goals in the last three games. Leveroni is a pure shooter who can score from anywhere in the offensive zone; Jalbert is a facilitator who can drive the net and put home pucks equally well; and Ryan, who has 2-5-7 thus far, prides himself on playing a sandpaper-type game, wearing down his opponents while taking in personally if his line is scored upon.

“Ryno is the worker on the line,” Connor Jalbert said of his left winger. “He’ll go into the corners, mix it up, loves doing the dirty work.”

Junior Chris Locke (4-4-8) centers the “1b” line in between wings Feingold (2-4-6) and massive Carter Laramie (3 goals). “I think Carter’s on the verge of scoring a ton of goals,” said Connor Jalbert. “He’s got that streaky scoring in him.”

Two skilled freshmen, Kyle Hart and James Caeran, skate on the third line with Drake Wyman and have begun to bond nicely as a trio.

The Headers’ defense, which has “a lot of guys who can rush the puck up and create offense from defense,” according to Aidan Jalbert (a Salem News hockey all-star in 2020-21), can go seven deep. In addition to Jalbert-Titus, sophomore Hogan Sedky (“I love how physical he’s been playing,” said Ryan) with gifted freshman Ryan Clay; senior Brennan Baker alongside junior Lyndan Dyer, and currently injured Cam Patrick, another junior. While they have yet to score, the rearguards have a combined nine assists.

Peters’ game is rounding into form between the pipes, and Marblehead got a pleasant surprise when junior backup Griffin Winter stepped in to beat Winthrop for his first win of the season.

“Our 6 a.m. practices at Salem State have been really lively lately, with everyone constantly fighting for their spots. That’s a good thing to have,” said Leveroni.

Ryan said the communication between he and his fellow captains and the team’s coaching staff, with head man Chris Wells and assistant Mike Donovan, has been as important as any other factor in the Headers’ recent resurgence.

“Both coaches are always in touch with Aidan, Eli and myself. They’re the guys in command, but they let us do what captains should be doing and let us drive the boat, you could say.”

For a team that calls Marblehead home, that’s said perfectly.

For the first time in three-and-a-half weeks, Pingree will play an actual game Wednesday afternoon. Following their usual Christmas break, then having a scheduled game at Kents Hill Saturday postponed because of the ongoing COVID-19 pandemic, the Highlanders will play three games in four days beginning at North Yarmouth Academy today, followed by home contests with Vermont Academy Friday (5 p.m.) and Middlesex Saturday (4:45 p.m.), both at the Johnson Rink.

Coach Dan Gordon‘s club take a 3-7 record into the next year, but had won two of their last four games before the break and were showing signs of improvement after a tepid start. Keeping the puck of the net (43 goals allowed) and a team-wide commitment to defense will be areas to focus on.

Long-time followers of The Blue Line Report will remember Bill Blackwell, one of the sport’s really good guys, who coached at Masconomet from 2005-12. During his time with the Chieftains, his teams went a combined 87-52-12, including a Cape Ann League championship in 2007.

The Chieftains had four freshmen playing prominent roles during the 2005-06 season — with the team going 4-14-2 — who improved by leaps and bounds as sophomores, when they finished 17-4-2, captured the league crown and reached the Division 2 North semifinals. They were defenseman Keaton Cashin (who went on to earn Salem News All-Decade honors and played at Salem State), forwards Jay Nichols and Tom Brazil, and their linemate, some guy named Chris Kreider ... who’s now one of the best scoring wingers in the National Hockey League with 21 goals while pulling in $7 million a year from the New York Rangers.

Fast forward to the present and Blackwell, now in his sixth year coaching at Methuen High, has four more freshmen who have been keys in the Rangers’ 6-1-2 start. These ninth graders are defender Quinn Ronan (“he plays with no fear,” said Blackwell); forwards Aidan Cashman and Zach Anderson; and goaltender Owen O’Brien, whom Blackwell said “stood on his head” in a tie with Cambridge.

Methuen doesn’t face any teams in The Salem News area during the regular season, but as a Division 3 playoff entrant could wind up facing the likes of either Danvers or Essex Tech.