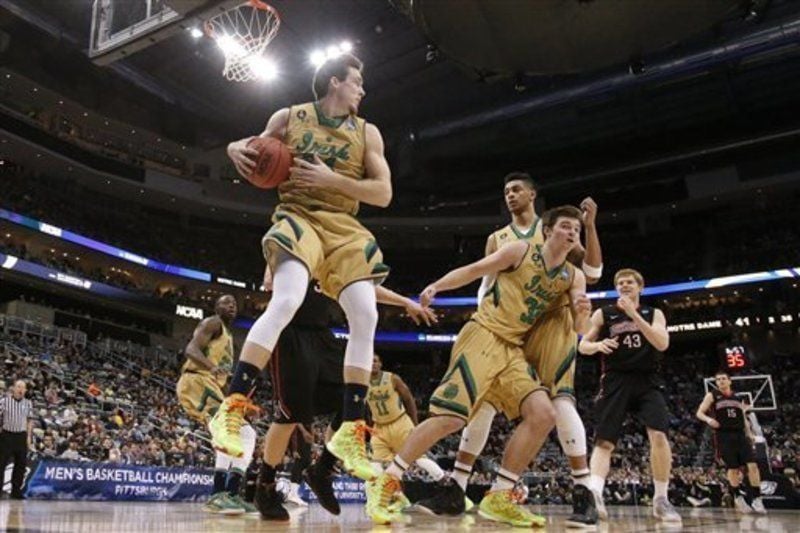 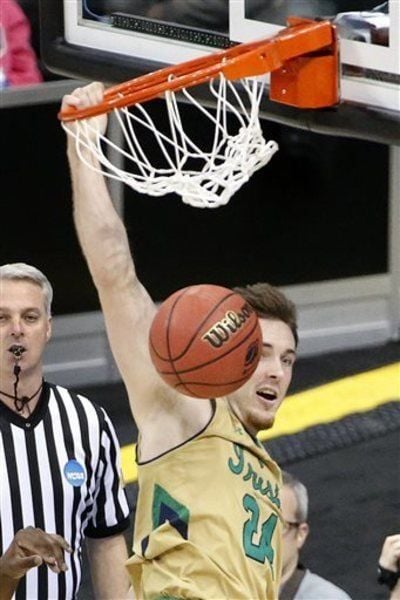 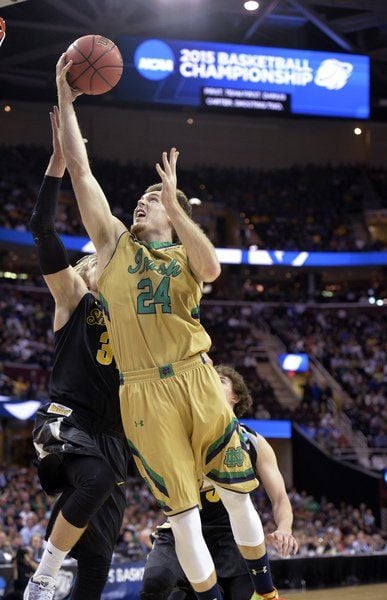 Notre Dame’s Pat Connaughton, a former star at St. John’s Prep, is projected to go in the second round of Thursday’s NBA Draft. 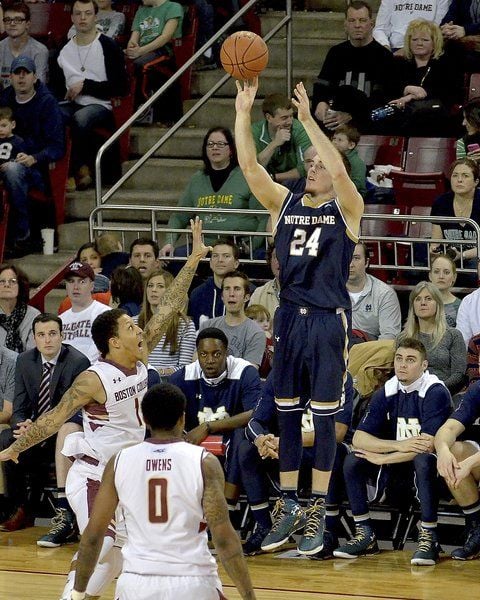 Pat Connaughton, a Notre Dame star who led St. John’s Prep to the Division 1 state championship in 2011, made a name for himself as an excellent shooter in college. It’s a talent that could help him get drafted by an NBA team during Thurday’s draft. Rose Raymond photo. 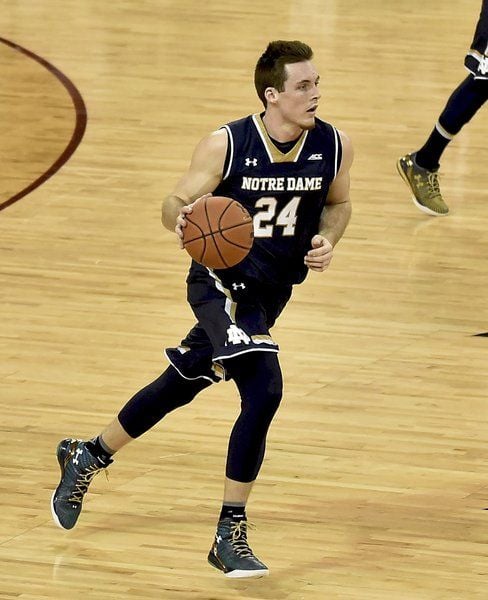 Former St. John’s Prep and Notre Dam basketball star Pat Connaughton is a versatile guard who is hoping to take his basketball career to the next level. He’s expected to be a second round pick in Thursday’s NBA Draft. Rose Raymond photo. 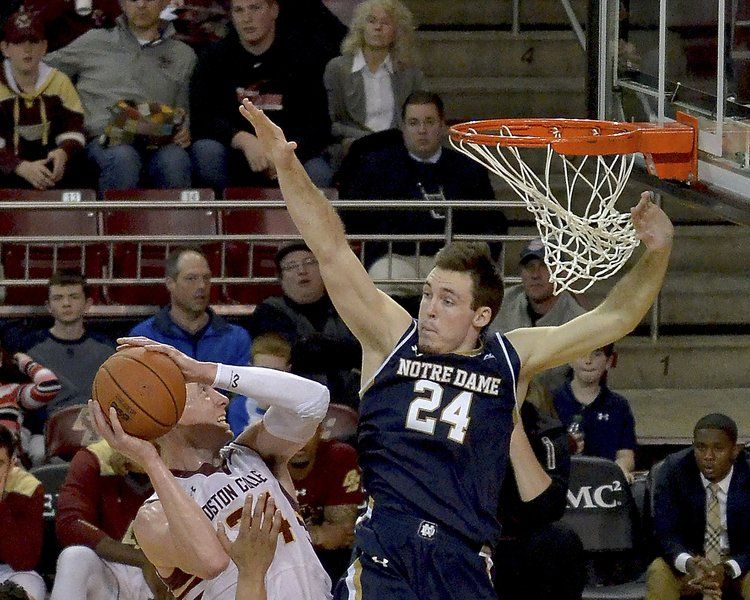 Rose Raymond photoNotre Dame’s Pat Connaughton goes above the rim to try to block the shot of Boston College’s Dennis Clifford on Saturday.

Notre Dame’s Pat Connaughton, a former star at St. John’s Prep, is projected to go in the second round of Thursday’s NBA Draft.

Pat Connaughton, a Notre Dame star who led St. John’s Prep to the Division 1 state championship in 2011, made a name for himself as an excellent shooter in college. It’s a talent that could help him get drafted by an NBA team during Thurday’s draft. Rose Raymond photo.

Former St. John’s Prep and Notre Dam basketball star Pat Connaughton is a versatile guard who is hoping to take his basketball career to the next level. He’s expected to be a second round pick in Thursday’s NBA Draft. Rose Raymond photo.

Rose Raymond photoNotre Dame’s Pat Connaughton goes above the rim to try to block the shot of Boston College’s Dennis Clifford on Saturday.

Pat Connaughton has found a way to shine at each level of basketball he has played.

In high school, Connaughton led St. John’s Prep to a Division 1 state championship as a senior. His play in a national AAU tournament the summer before his senior year helped him become a two-sport, Division 1 collegiate athlete at the University of Notre Dame.

Connaughton just recently finished up his college career in South Bend, Indiana by guiding the Fighting Irish to the Elite Eight in the NCAA Division 1 Men’s Basketball Championship, a level Notre Dame hadn’t reached since 1979.

Thursday night, Connaughton hopes to take the next step with basketball. He’ll be waiting to hear his name called during the NBA Draft but, true to his style, he won’t be worrying about it.

Unflappable on the basketball court or on the pitcher’s mound — Connaughton’s other athletic specialty — he’s equally calm and cool away from athletics.

“I’m kind of relaxed. At the end of the day, I did all I can do. I tried to improve my draft position as much as I could. Now it’s a matter of enjoying it,” Connaughton said. “A lot of kids might be nervous, sweating about where they get drafted, but I’m looking at it similar to how I looked at baseball. It’s not about how high or how low, it’s about how you’re able to succeed after. The end all, be all is not to get drafted, it’s about having a successful career.”

Since closing the books on a Notre Dame career that statistically ranks among the school’s all-time greats, Connaughton has been zig-zagging across the United States.

Shortly after narrowly missing out on a major upset against then-unbeaten Kentucky in the Midwest Regional Final in late March, Notre Dame’s 6-foot-5 guard/forward participated in the Portsmouth Invitational, a showcase event held in Virginia for some of the top seniors in college basketball.

After that, Connaughton went to Chicago for the NBA Draft Combine.

Individual team workouts followed and a player who wasn’t even on the NBA’s radar a couple years ago has since escalated from a potential draft pick after the college season to a predicted early-to-mid second round pick (some mock drafts have him going as high as No. 41 to the Brooklyn Nets).

“I think I’ve done 13 or 14 workouts. I’ve been anywhere from the Midwest to the East Coast to the West Coast, all over. It’s been a great experience. Everyone talks about how tiring it gets and how long the process is and I try to look at it the opposite way,” Connaughton said. “Regardless if you make it in the league as an all-star or flame out after a year, you only get to do it one time so you gotta enjoy it and have fun. That makes the process better and makes your ability to play in front of GMs better. Overall, it makes it a more enjoyable experience. There are 30 teams and only one of me and the next time I come into their gym they might not treat me as nicely.”

With a fastball that clocks in around 95 miles per hour and a chance to play Major League Baseball on hold, it appears NBA organizations are finally coming to grips with the fact that Connaughton is serious about pursuing a career in basketball.

Connaughton was selected in the fourth round by the Baltimore Orioles in MLB’s 2014 Amateur Draft and he pitched in six games last summer for the Aberdeen IronBirds, throwing 14.1 innings with 10 strikeouts and a 2.51 earned run average.

He’s been intensely focused on basketball this year and he wants to prove he belongs in the NBA.

“I’m going to ride it out until it stops, but that being said I won’t ride it out on a plane to Italy. I’m going to make sure I have a chance in the NBA,” said Connaughton, who will watch the draft with family and close friends in Hampton, New Hampshire. “Even if I don’t get drafted I’ll fight to make a team. If I can’t or if it’s looking like it’s definitely not going to happen, I’m not going to put my baseball career on or hold or in jeopardy. I’m not going to go overseas and play when I could play baseball in the United States.”

A Surprise to Others

Connaughton’s performance at the Draft Combine was eye-opening for many people.

He made a name for himself at Notre Dame as a knock-down three-point shooter who rebounded exceptionally well for his size. Playing in a small lineup, Connaughton also matched up defensively with players much taller. Against Kentucky in the regional final, he defended Wildcat big men Karl Towns and Willie Cauley-Stein, a pair of post players expected to be selected in the lottery.

Connaughton proved his strength as a three-point shooter at the combine, but also showed he has the athletic ability to stick with wing players in the NBA.

“It’s not a surprise to me, but at the same time it’s enjoyable to surprise other people,” Connaughton said about his athletic performance at the combine. “If it wasn’t a surprise to other people I might be in a better, quote unquote, draft position. One way or another they’ll find out about it and now it’s fresh in their minds.”

Also fresh in the minds of general managers across the league is how the Golden State Warriors won the NBA Championship by playing “small ball”. Instead of using a traditional lineup with a center and power forward, the Warriors frequently employed a lineup heavy on guards with 6-7 forward Draymond Green lining up against the opposing team’s center.

If the NBA is a copycat league — and it is — you can expect more teams to turn to lineups like the one Golden State used.

It’s a style that could help Connaughton find a home in the NBA.

“It’s good anytime a league, especially the NBA, is going towards scoring and smaller lineups and shooting and things of that nature. It’s about spreading and attacking and closing out and showing more athleticism,” Connaughton said. “In college it’s not spread as much as it can be in the NBA. Hopefully that will help and will translate.”