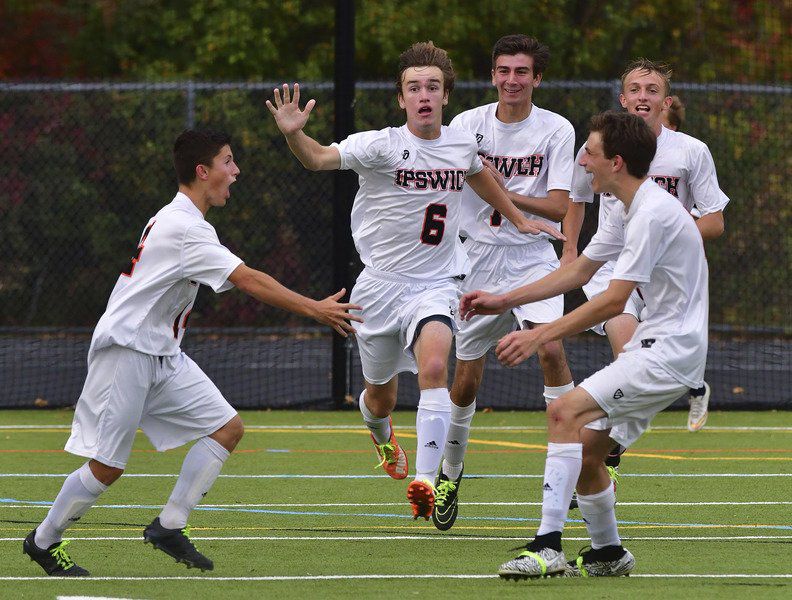 Photos by JoeBrownPhotos.comMembers of the Ipswich Tigers celebrate Cowan McCormick’s (6) late game, and what would ultimately be, the game winning, goal. 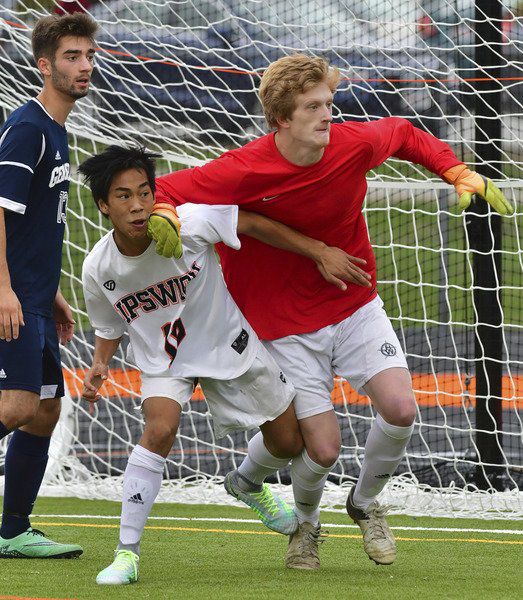 Hamilton-Wenham Goaltendet Jack Wosepka pushes Ipswich's Max Duffeld as they wait the ball on a corner kick. Photo by JoeBrownPhotos.com 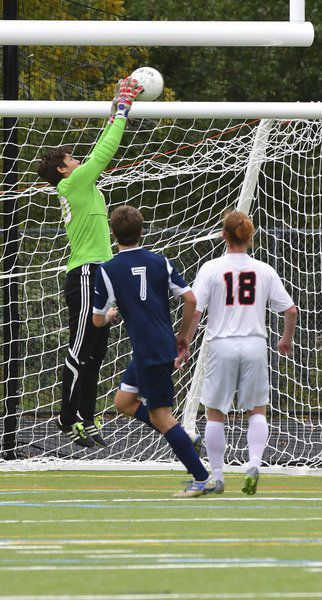 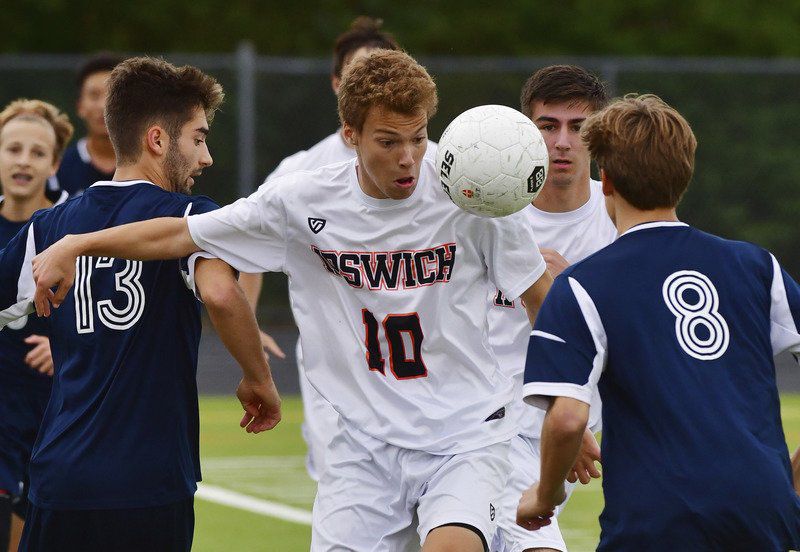 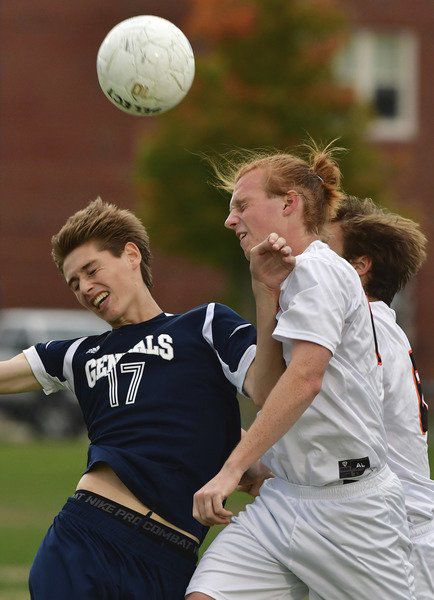 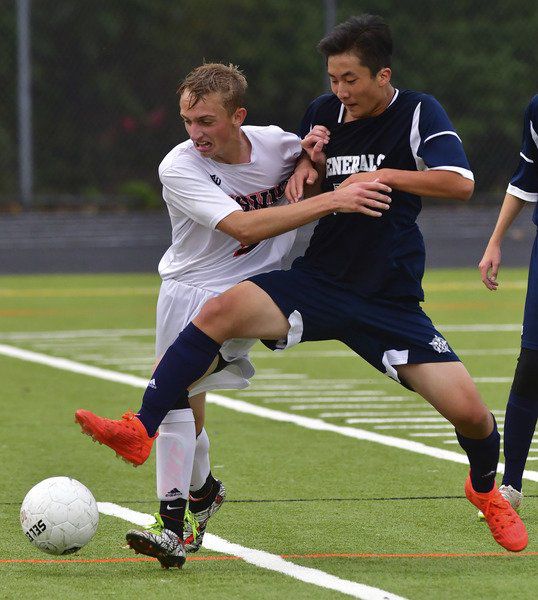 Ipswich Jesse Cullen-Popp and Ham-Wen Jay Kum battle for the ball late in the game. Photo by JoeBrownPhotos.com 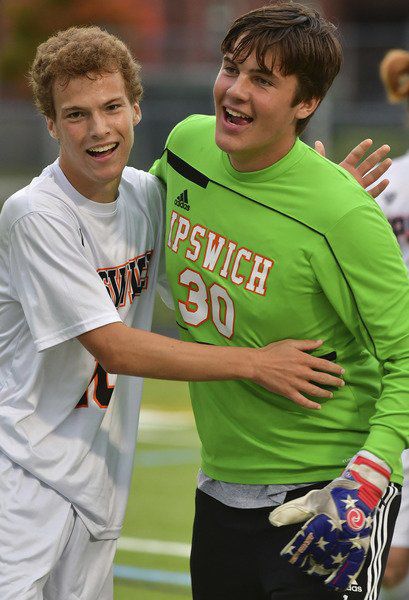 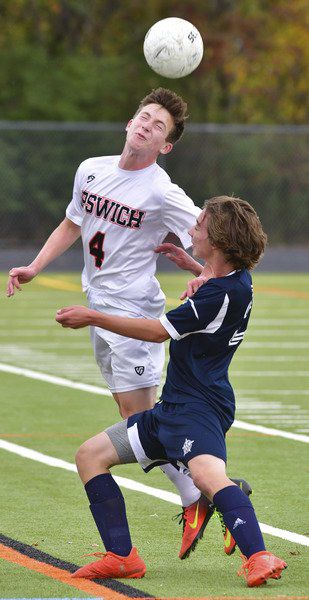 Miles Brengle of Ipswich, manages to head the ball away from Hamilton Wenham's Eli Leonard during the game at Ipswich High School Photo by JoeBrownPhotos.com 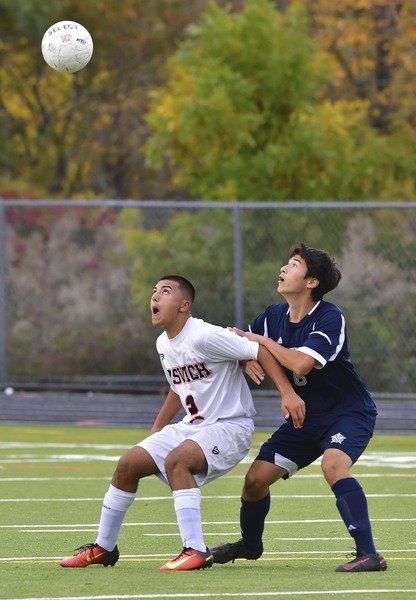 Photos by JoeBrownPhotos.comMembers of the Ipswich Tigers celebrate Cowan McCormick’s (6) late game, and what would ultimately be, the game winning, goal.

Hamilton-Wenham Goaltendet Jack Wosepka pushes Ipswich's Max Duffeld as they wait the ball on a corner kick. Photo by JoeBrownPhotos.com

Ipswich Jesse Cullen-Popp and Ham-Wen Jay Kum battle for the ball late in the game. Photo by JoeBrownPhotos.com

Miles Brengle of Ipswich, manages to head the ball away from Hamilton Wenham's Eli Leonard during the game at Ipswich High School Photo by JoeBrownPhotos.com

In a competitive scoreless tie for the majority of the contest, each team’s goalie made some key stops to keep their opponent off the board. But with just five minutes remaining in regulation, the Tigers finally capitalized on an opportunity as Tyler Whynott found Cowan McCormick for the game-winning goal.

Jack Gardner stepped up big in net to record the shut out for Ipswich, while Aidan Johanson, Jesse Cullen-Popp, Miles Brengle and Jacob Eliopoulos all played well in what was a team win.

“This was a back and forth game and both teams played really well. It was a fun game to be a part of,” said Ipswich head coach Greg Scruton. “Both teams had some good chances and we were just able to put that one away towards the end. The boys have been playing great lately; it’s fun to see them really come together.”

Newman Prep 4, Waring 3: Co-captain Sacha Demby and Jared Wood both had goals for the Mavericks (5-2-2), and sophomore Konrad Ellis also hit the back of the net.

Pingree 3, Beaver Country Day 1: The Highlanders got goals from Oliver Pinyochon, Jake Spaulding and Lucas Filosa to improve to 8-1 overall. Goalie Conor Whalen made seven saves for Pingree and Filosa and Peter Evangelista each picked up assists.

St. John’s Prep 210, Danvers 255: The Eagles (13-1) set a new standard for St. John’s Prep golf teams at Kernwood Country Club, thanks to an impressive 3-under par round from Mark Turner. Cole English also carded an under-par round at 34, while Will Grady and Griffin Chenard came in safely at par (35).

Bishop Fenwick splits: The Crusaders lost to Acton Boxboro, 90-68, a day after beating Archbishop Williams 192-176. Greg Mattucci led Fenwick in both matches with 17 points vs. A-B and a season high score against Williams. Chris Russell and Rob Murphy also had strong performances vs. Williams.

Waring 4, Landmark 0: Elizabeth Patrick had another terrific game offensively, scoring three of her team’s four goals. Julia Krautz had the other while Allie Mitchell had a pair of assists as Waring moved to 7-2 on the year. Kat Pappas was strong in net, making five saves.

Essex Tech 3, Greater Lowell 0: The Hawks (8-2-2) clinched a tournament berth with a convincing road win yesterday afternoon. Ella Spiess had a goal and an assist, Christine Russo and Alex Melendes had a goal each and Abby Stanton had an assist while Madison Roy and Skylah Mahon also played excellent in the victory.

Danvers 2, Gloucester 0: The Falcons officially qualified for the state tournament for the 27th straight season behind first half goals from Sarah McCarrison and Sarah Unczur. Lydia Runnals and Kelly Connors had assists while Erica Blanche had a terrific game on defense and goalie Savannah Dempsey earned the clean sheet.

Pingree 3, Phillips Exeter 1: The Highlanders (8-1) made it eight straight wins as senior Taylor Casale netted another hat trick. Assists went to Lexi McNinch, Porter Dooley and Jess Tonthat had assists as Pingree became the first team to score three in a game against Exeter this year. Keeper Holly Stam had a strong game as well.

Peabody 7, Saugus 1: Seniors Kirsten Bradley and Amy Drover scored goals to help the Tanners (8-1-1) bounce back from their first loss of the year. Senior Jillian Amirault had two assists and nine total Peabody players recorded at least one point.

Masconomet 2, North Reading 0: On Senior Night, the Chieftains (10-2-1) got contributions from all 10 of their 12th graders in a big win in the CAL standings. Erin Donovan netted the winner assisted by Allycia Proulx-Walter and Sam Jackson’s goal was assisted by Athena Kordis. Keeper Katy Pelletier made eight saves for her eighth shutout and Ani Nazarian and Kate Drohosky played great on defense.

Hamilton-Wenham 2, Ipswich 0: Meg Vien and Erin O’Shea scored for H-W (8-2-2), which punched its playoff ticket. Shae Granese and Kelly Walsh had her eighth shutout in net.

Hamilton-Wenham 5, Arlington Catholic 0: Audrey Dalton and Joshua Ward each scored a pair of goals while McKenzie Plante added the other. Taylor Woodbury and Plante had the assists and Cara Goudie played excellent for the Generals as well, to help their team move to 6-6 on the season.

Swampscott 1, Peabody 0: The two NEC rivals battled to a scoreless tie before the Big Blue was able to get on the board in the final minute of action. For Peabody, Sofia Rodriguez made 10 saves in net while Sara Feinstein and Camila DeOliveria stopped many corner plays. Nicole Ferrante had a strong game at midfield.

Notre Dame Hingham 2, Bishop Fenwick 1: Grace Harris’ goal assisted by Allie Giguere got the Crusaders on the board, but always tough Notre Dame pulled away for the win. Caitlin Dwyer also had a strong overall game for Fenwick (4-9-1).

Danvers 1, Wilimington 0: Taylor Gent had a great game on defense and also assisted on Riley Doyle’s first-half game-winning goal. Danvers (8-3-2) won for their fifth time in its last six outings with strong defense by Bella Silva and Rhianna Leslie.

Peabody 3, Marblehead 0: The Tanners (11-1) got contributions from all over the floor in upending Marblehead (9-2) by scored of 25-16, 25-23, 25-20. Hannah Kemp handed out 20 assists for Peabody while Melissa Gray had eight kills, Serena Laro totaled seven kills and four blocks and Lexie Zammer had six kills. Defensively, Joanna Bampi and Alyssa Alperen had outstanding efforts. For Marblehead, Jenny Norcross and Clara Pollard had 11 kills apiece while Mandy Dumais was fantastic on defense.

Marblehead 18, Danvers 45: Race winner Oliver Jacob turned in a time of 17:21 to help the Magicians remain undefeated at 5-0. Elrik Larson was second in with a time of 17:52 and Marblehead’s Ian Strothers was fourth in 18:23. Danvers was led by Joe Perriera, who finished in third place in 17:56.

Marblehead 20, Danvers 44: Falcons’ Katie Crum was the first runner to cross the finish line with a time of 21:31, but Danvers failed to earn any other top 10 finishers in the loss. On the other side, Marblehead garnered a number of strong performances as Mia Forster (22:09), Kristy Twaalfhoven (22:29), Ellen D’Archangelo (22:48) and Montana Joyce (22:55) finished in second, third, fourth and fifth place, respectively. Grace Cunningham, Ellie Emerick and Olivia Cleary rounded out the top eight for the Magicians.