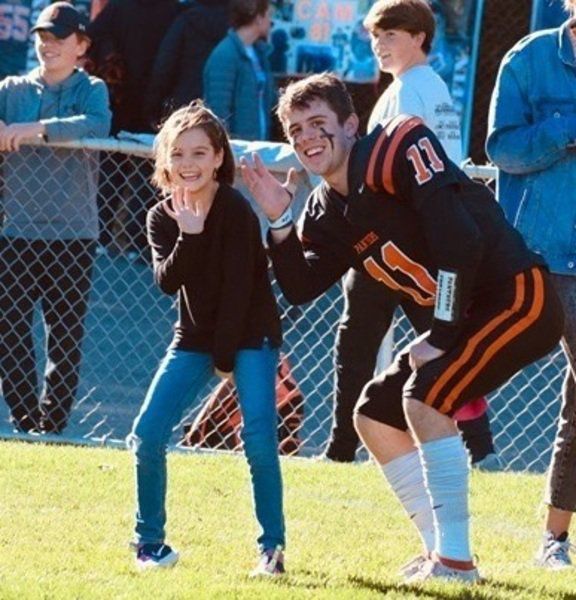 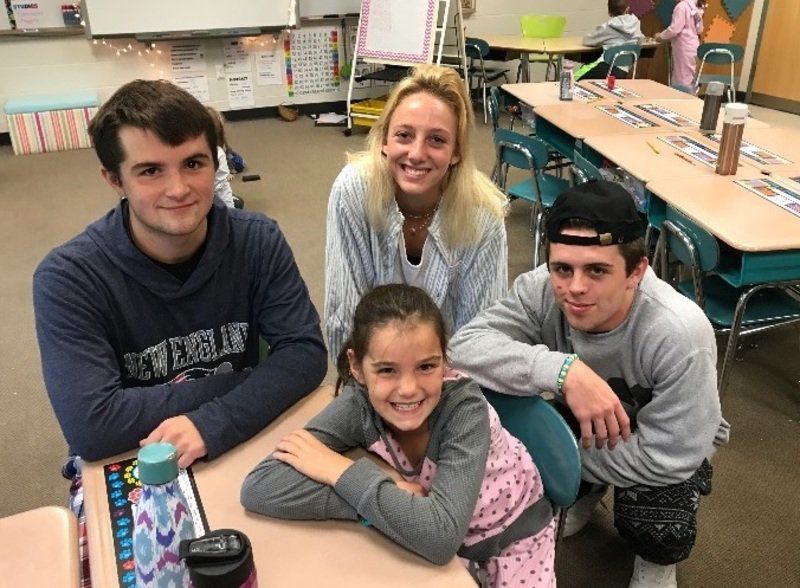 Annie Towler, Andrew Mezza and Danny Morency understand that sports, when harnessed correctly, hold the power to change lives for the better.

The three Beverly High student-athletes used this knowledge when they started their #Kartwheels4Kids campaign to raise awareness and funds for pediatric cancer, for the Jimmy Fund, and for Madeline St. Pierre; a seven-year-old Beverly girl who was diagnosed with cancer last year.

Madeline, a third-grade Centerville Elementary School student, has been competing in gymnastics since she was four. She especially loves doing cartwheels, whether it’s with her team at Iron Rail Gymnastics in Wenham or with her family in her Beverly home.

“She’s just constantly doing cartwheels in our living room, or backbends off our furniture, or standing on the balance beam in our basement,” Madeline’s mom, Melissa St. Pierre, said with a laugh while discussing her daughter’s love for the sport.

Madeline’s clear passion for living room acrobatics is exactly why the trio of Beverly students decided to name their social media challenge the #Kartwheels4Kids Challenge.

“Madeline is a gymnast, and that was one of the first things we learned about her when we met her. We all thought that (#Kartwheels4Kids) would be a perfect fit,” explained Mezza, a senior captain for Beverly’s lacrosse and hockey teams.

As for what the challenge entails, it takes a set-up that’s similar to a fellow North Shore-born campaign; Peter Frates’ ALS Ice Bucket Challenge. Those who are challenged are given 24 hours to record themselves doing three cartwheels, one for every 100,000 children that are diagnosed with cancer each year, and then challenge others to join in. The videos are posted to Facebook and Instagram, tagging the Beverly DECA “Go for Gold” page and using the hashtag, #Kartwheels4Kids. Participators are encouraged to donate to the Jimmy Fund in order to raise money to help fight pediatric cancer.

Why did they see sports as the channel through which this challenge could catch fire and spread? According to Towler, the answer is a simple one: family.

“I think teams are a family and you treat everyone (on your team) like a family," she said. "You always give the most support you can.”

Mezza and Morency took their reasoning a step further.

“I think sports teams understand pain and sacrifice more because they’re together grinding out runs, skates, everything together,” said Mezza. “A lot of athletes know how to battle and I think when they see someone going through something that’s bad, they ... ”

As Andrew began to trail off while trying to collect his thoughts, Morency finished his thought. "It hits home and they want to jump in and help as much as they can,” he said.

Kristen Mareschalchi, a business teacher at Beverly High School and the DECA advisor for this project, believes that this campaign has been able to spread so easily simply because the people in Beverly and the greater North Shore are caring and show up to help when they’re needed.

“When people recognize that something’s important, they want to support it and it’s really neat to support in numbers with a team," said the Swampscott native. "I think it shows that every kid is a part of this, and every kid can make a difference.”

High school and college teams across the North Shore have been spreading the challenge. Over $3,000 has been donated to the Jimmy Fund in just one month. Madeline, along with her brother, cousins, and the group of Beverly students, went on the field at Hurd Stadium earlier this month before Beverly's home football game with Danvers and did cartwheels in front of the fans in attendance.

Proving the sense of community responsibility that exists on the North Shore, Madeline’s story and challenge didn’t stay restricted to only high school athletics teams. The #Kartwheels4Kids campaign has made a huge impact on the athletic scene at Endicott College as well.

Comes from a place of caring

The #Kartwheels4Kids Challenge caught the attention of the Endicott men’s lacrosse team early on, and they decided to get behind the campaign by bringing it to their school's Beverly campus. In their initial video, they challenged a number of fellow Endicott athletic teams -- and the call was answered.

Eric Hagarty, the head coach of Endicott men’s lacrosse, emphasized just how much potential for good there is within the team structure of organized sports.

“I think that athletes are unique in the sense that they’re motivated, but I think that the most effective athletes care about the places they’re in and the communities that they’re a part of," said Hagarty. "So, I think that with a roster of however many of these motivated, caring, appreciative people (a team has), they have the ability to do a lot of good.”

That potential to make a difference has certainly been realized with this challenge. Since Madeline, Mezza, Morency and Towler posted the initial kick-off video on Sept. 30, their Jimmy Fund donation page has received $3,314 in donations that will go directly to the Jimmy Fund’s fight against pediatric cancer. That’s a whole lot of good being done.

Brian Wylie, Endicott’s athletic director, was overwhelmingly ecstatic while talking about the impact that Endicott athletes, Beverly athletes, and North Shore athletes are making off the field.

“This is something that is bigger and more important than winning games or preparing for a conference championship… It makes me proud that (our athletes) thought enough to bring this great concept and great awareness for pediatric cancer from Beverly High School to Endicott and Endicott athletics," Wylie said. "Then, to see how it’s mushroomed and how it’s really taken off with every one of our teams and Bevely’s and now other colleges are picking up on it. It’s amazing.”

Since Towler, Mezza and Morency started the #Kartwheels4Kids Challenge as a part of their school project, they, along with Dr. Wylie, realize that this project is bigger than that. It’s about making a difference, changing lives, and being good people, but more importantly it’s about Madeline St. Pierre and her family as well as everyone else who has been impacted by pediatric cancer and stands to benefit from the Jimmy Fund’s efforts.

“I feel like ever since we started this project, it’s not really about DECA anymore. It’s about making (Madeline’s) experience and her battle as easy and fun as possible for her,” confessed Danny Morency.

Editor's note: Kevin Morency ,a sports correspondent at The Salem News, is the older brother of Beverly High quarterback Danny Morency and a member of the Endicott College men's lacrosse team.