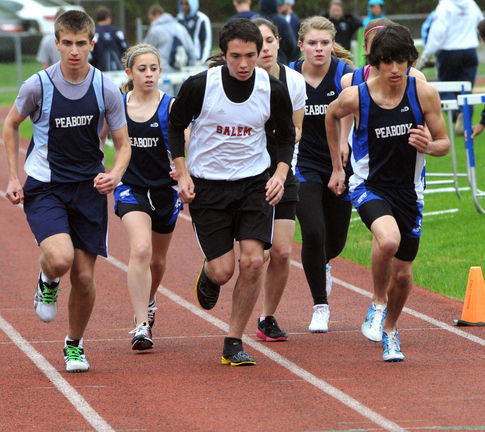 Runners from Salem and Peabody start a 2-mile race during their co-ed outdoor track meet yesterday. 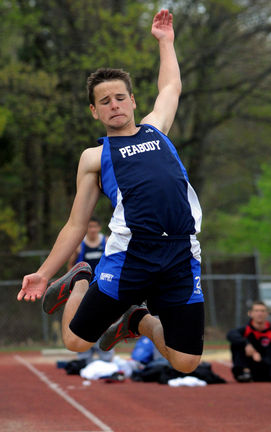 Peabody's Chris Therrien flies through the air during one of his attempts at the long jump yesterday against Salem. 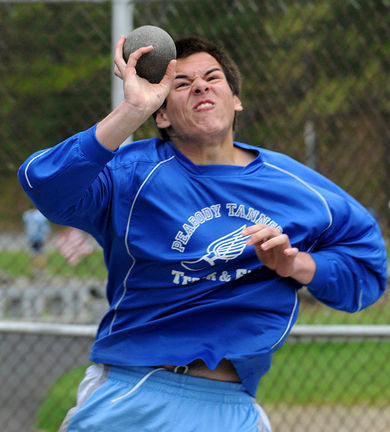 Runners from Salem and Peabody start a 2-mile race during their co-ed outdoor track meet yesterday.

Peabody's Chris Therrien flies through the air during one of his attempts at the long jump yesterday against Salem.

The Crusaders won 4-1 to improve to 10-0 and need to win only one of their final three matches to win the league championship.

Freshman Meagan McCarthy dropped her first set of the year, but won a tough three-setter to seal the victory for the Crusaders. She won 6-4, 3-6, 6-4.

The Crusaders also picked up a big win from Sarah Green and Sara Kanarkawiecz at No. 2 doubles, 6-4, 6-7 (2-7), 6-2. That win was the first victory Fenwick has had in doubles against Austin Prep in three years.

st. john's prep 3, bc high 1: Sophomore setter Sean Brennan finished with 49 assists and senior outside hitter Sean Mackinson had 26 assists for the Eagles, who bounced back from a rare loss the previous night and improved to 12-3.

peabody 93, salem 46: Peabody (3-2) prevailed, led by Sarah May, who won the 400 hurdles and the 400 meters. Pam Zabala took the shot put and discus and Catarina Rocha took the mile and the javelin. For Salem, Jasmine Bryant won the triple jump, the 200 meters and the 100 hurdles. Desiree DeLeon won the 100 and Salem also took the 4x400 with Natasha Demers, Amanda Monaco, Izzy Figueroa and Lauren N'Guette. Salem dropped to 1-5.

Triton 2, Hamilton-Wenham 1: Ryan Forrginer allowed only two hits over six innings, but Triton got the go-ahead run in the third and the Generals (4-6) were limited to only three hits. Jake Prince drove in H-W's run and Jimmy Love and Dylan Keith were strong all around.

North Shore Tech 16, Notre Dame 5: Senior shortstop Sean Hebert went 3 for 4 with five RBI and four runs scored to power the Bulldogs (6-3). Jordan Castillo earned the win on the mound and contributed three hits and two runs, while Derrick Frazier returned from injury by collecting a pair of hits.

Wilmington 5, Manchester Essex 0: Alex Ray and Max Nesbit each doubled for the Hornets (0-12).

Manchester Essex 3, Swampscott 2: The Big Blue, who beat Peabody on Monday, got victories from Val Temin and the doubles team of Matt Gilberg and Ben Friedman.

The Eagles face a big test today when they travel to play defending state champs Wellesley.

Masconomet 15, Beverly 7: Courtney Cliffe (4 goals, 2 assists), Amy Arnold (3-1), and Becca Phillips (2-0) were multiple goal-scorers for the Chieftains, who improved to 10-5 and qualified for the state tournament. Jackie Tilton, Kathleen Gillespie, Pam Herter, Brynn Wendel, Rachel Rogal, and Alex Romaznoli each had one goal for Masco, while Laurel Epps and Shannon Rice contributed one assist apiece.

Camden Vitale scored three goals and had one assist for Beverly (8-4), while Greer Knowlton-Binns, Lainey Bernfeld, Corinne Woods, and Liz Doherty each had one goal.