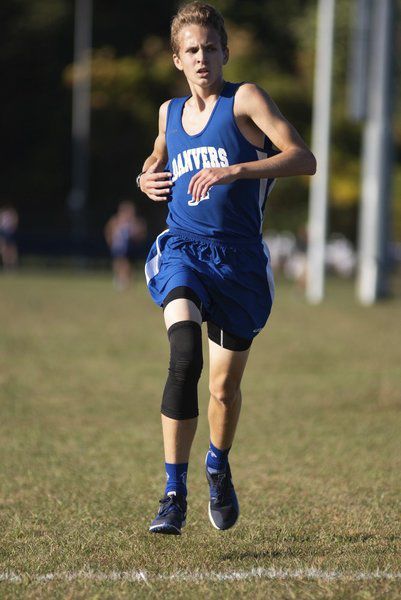 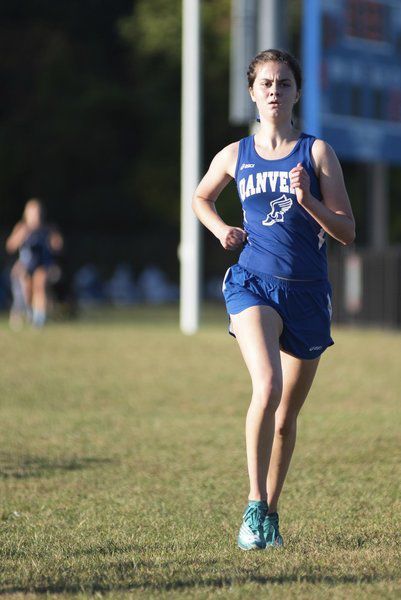 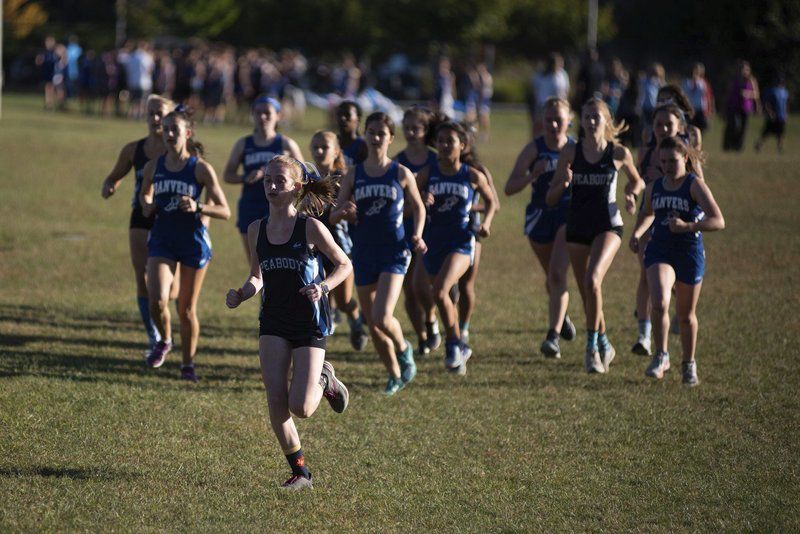 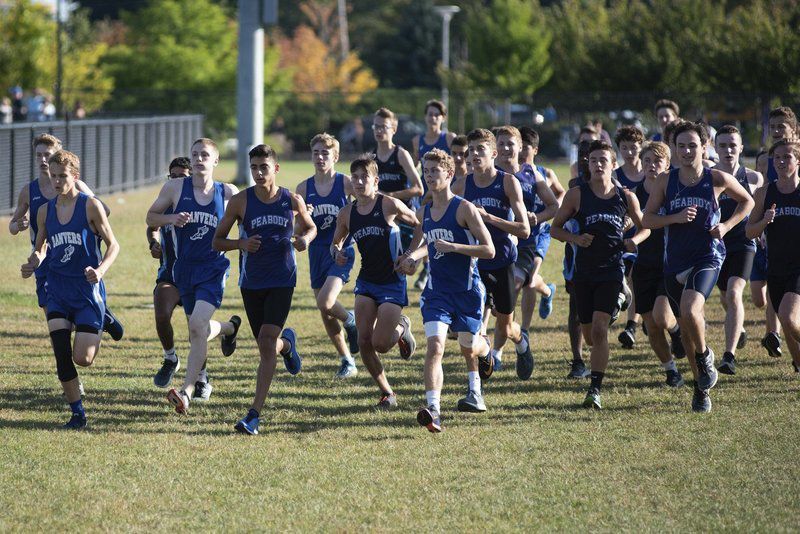 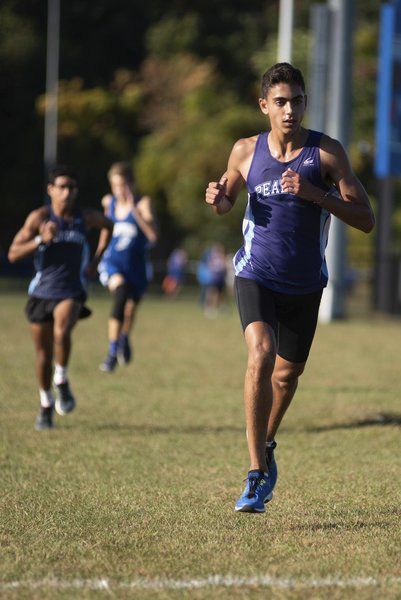 RYAN MCBRIDE/Staff photos(LEFT) Antonio Craveiro won yesterday’s meet against Danvers with a time of 16:13. (RIGHT) Leaders separate themselves from the pack during girls cross country. 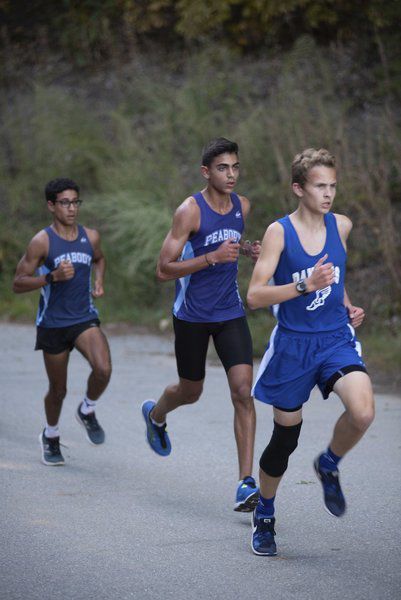 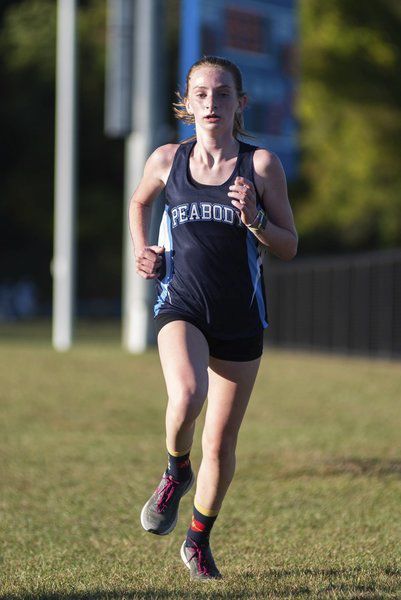 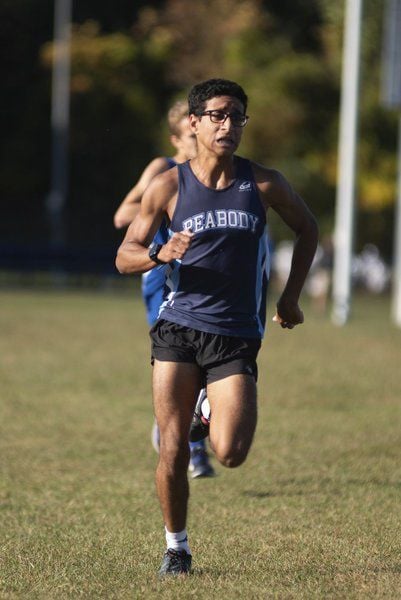 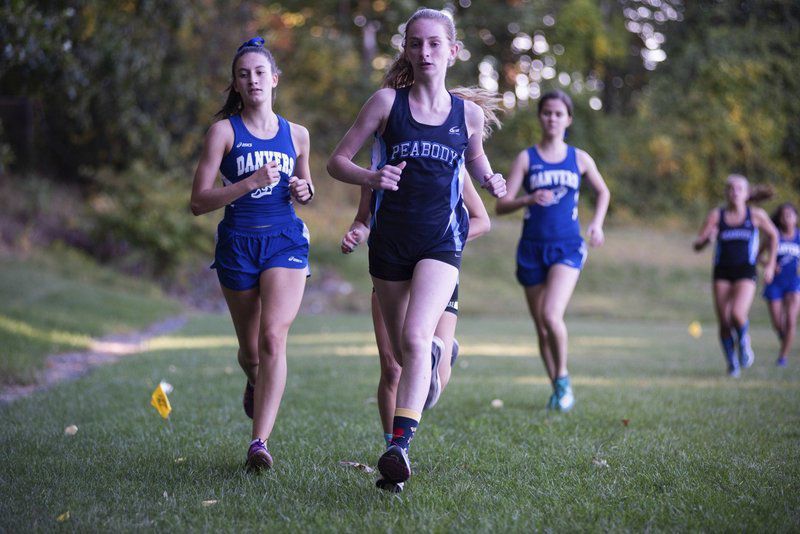 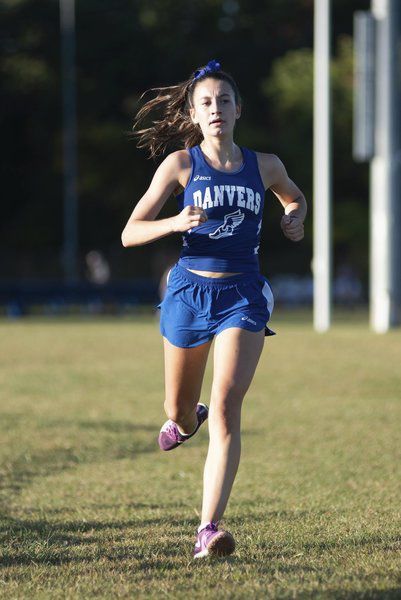 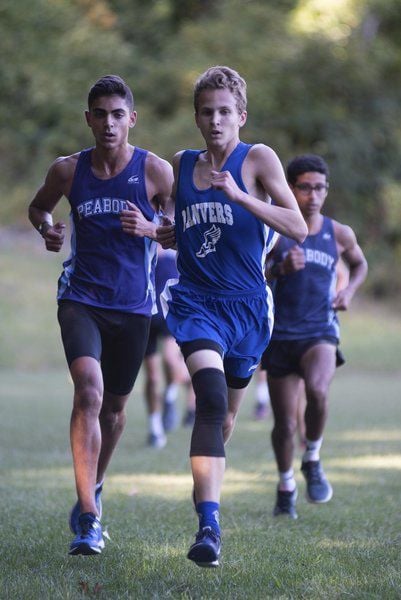 RYAN MCBRIDE/Staff photos(LEFT) Antonio Craveiro won yesterday’s meet against Danvers with a time of 16:13. (RIGHT) Leaders separate themselves from the pack during girls cross country.

Danvers 26, Peabody 30: Danvers (3-1) made history in their win over Peabody as it marked the first time in school history that the Falcons have defeated the Tanners. Danvers’ top runner, Catie Nemeskal, placed second overall with a time of 19:51, while Olivia Viel (third place), Ava Navarro (sixth place), Gabby Sherrick (seventh place), and Cynthia Boyd (eighth place) all helped bring home the victory. To make the win even sweeter, every single Danvers runner notched their own PRs on their home course in the race.

Leading the way for the Tanners was freshman Sarah DiBasta, who won the race with her first place finish.

For Danvers (1-3), the day’s bright spot can be found in the fact that every single Danvers runner secured personal PRs for the track that is their home course. TJ Glowick was the Falcons top runner at 16:18, earning himself a third place finish.

Dana Hall 3, Pingree 2: The Highlanders (2-1) lost a marathon five-setter by a 25-17, 14-25, 25-20, 19-25, 7-15 score despite solid performances across the board. Senior setter Maddy Mandalinci had 28 assists, senior captain Liv Burr had 18 kills, senior captain Abbey Skinner had 11 blocks and eight kills, senior libero Callie MacLaughlin had 39 digs, and junior outside hitter Katherine Silacci served a tremendous game with 28 serves and eight being aces.

Masconomet 3, Ipswich 0: Masco (7-3) swept Ipswich in three straight sets (25-12, 25-17, 25-17) to grab their seventh win in 10 games this season. Rhenna Murray lead the way for the Chieftains, collecting 26 assists, while Paige Richardson turned in 12 kills of her own. Sophia Varinos (12 digs) and Rebecca Toomey (seven blocks) also played well for Masco in what was a dominant, team effort.

For the Tigers, Emily Davidson, Claire O’Flynn (7 kills), Addie Wittkamper (serving 100 percent with 6 aces) and Haley O’Connor all turned in strong performances in the loss.

Over the weekend, Ethan Doyle shined at the NEPGA Remy Cup, teaming up with another Massachusetts representative in a Ryder Cup type format where they played four-ball for the front nine and alternate shot for the back. Doyle and his partner lost by one shot on the front despite a strong showing of 1-over par, but rebounded on the back to snare the overall win and help team Massachusetts top Connecticut.

Hamilton-Wenham 102, Ipswich 98: Hamilton-Wenham (4-4) got back to .500 on the season with a road victory over Ipswich. The Generals’ two top golfers on the day were Andrew Winch, who snared 25 points, and Tom Kaine (18 points).

For the Tigers (2-6), senior captains Andrew Gilligan and Bobby Grady each turned in 19 points.

Marblehead 43.5, Winthrop 28.5: Marblehead (4-4) evened out its record with a victory over Winthrop at Tedesco Country Club. Matt Weed was the medalist for the Magicians, shooting 41 and securing 7.5 points on the day. Jack Sontz and Drake Wyman both secured 7 points for Marblehead, while Gavin Lundgren and Jacob Nagel also won their individual matches.

Beverly 6, Winthrop 2: Jackson Erwin and Sam Phillips each scored a pair of goals to help the Panthers imrpove to 6-1-2 on the season. Danny Buzi and Carter Shepherd also scored, with assists going to Buzi (3), Miles Vollmer, Ian Visnick and Nick Braganca.

Peabody 1, Lynn Classical 0: The Tanners (4-2) snuck past their NEC rival thanks to a successful penalty kick from Edward Santos in the 19 minute mark of the second half. Peabody’s defense, led by Ben Kemp, Nick Sablone, Tyler Surman and Costa Prousalis, played terrific in the win.

Cambridge School of Weston 4, Waring School 1: Providing a bright spot in the three-goal loss for Waring was Gyani Wasp, who turned in his best performance of the season.

Pingree 5, Dana Hall 0: The highlanders cruised to a 6-0-1 record behind a hat trick from Lexi Garcia and two more goals from Jess Tonthat. Erin Barresi secured her sixth shut out in net in the win.

Waring School 3, Cambridge School of Weston 2: The Mavericks (2-2) came from behind twice on goals from Lumiere Kazadi, Amelia Wyler and Olive Sauder en route to the win.

Beverly 9, Winthrop 1: Cassie Jones (3), Isabella Sullivan (2), Ceirra Merritt, Meghan Block, Kayleigh Crowell and Haley Bello all scored to propel the Panthers (8-0) to another win. Sydney Anderson pitched a shut out in net before giving way to another keeper with 10 minutes left in action.

Bishop Fenwick 3, Arlington Catholic 1: Madison Csogi scored a pair of goals on assists from Allison Mitchell and Bella DelVecchio to help the Crusaders improve to 5-2 on the season. Mitchell also scored a goal while center backs Jenna Durkin and Amy Hatfield, as well as midfielder Isabella Fabio also played well.

Marblehead 3, Lynn English 0: The Magicians got goals from Anna Rigby, Emma Robinson and Carter Murray en route to the shut out victory.

Danvers 2, Salem 0: Arianna Bezanson and Reese Pszenny scored the Falcons (7-1) two goals on assists from Abby Cash while Gabby Chisholm was terrific defensively in the win.

For Salem (4-4), goalkeeper Ella Galante-Barrett played well in the defeat, as did defenders Marie McCarthy and Isabella Cunha.

Pingree 5, Dana Hall 3: Katelyn Clark scored twice while Caroline Kagan, Kendall Travis and Jackie Elward each scored once to help the Highlanders improve to 6-2 on the season.

Gordon 4, Eastern Nazarene 0: The Scots improved to 7-1-1 behind a pair of goals from Emily Rodriguez and individual markers from Sophia Mammana and Kyra Skurcenski. Assists went to Lexi Potter and Calla Ashley.

Salem State 3, Westfield State 2 (OT): The Vikings moved to 5-3 on the season thanks to Allison Couillard’s unassisted goal in the extra period. Coulliard also scored in regulation on an assist from Melanie Mason, while Cassie Curtin got Salem on the board early with a marker of her own.

Stonehill 7, Endicott 2: The Gulls dropped their season opener despite wins from Daniel Rinkert (7-4, 4-6, (10-4)) and the doubles tandem of Collin DiNardo/Cooper Walters (7-6).