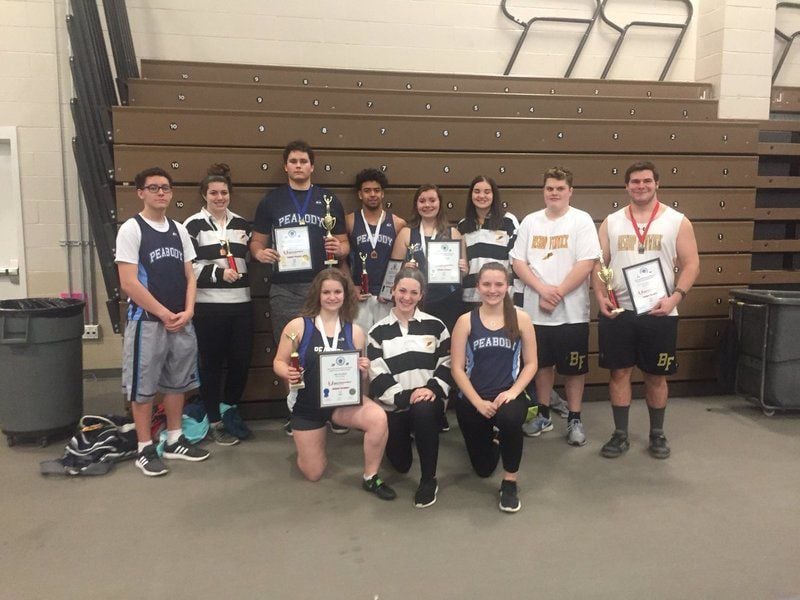 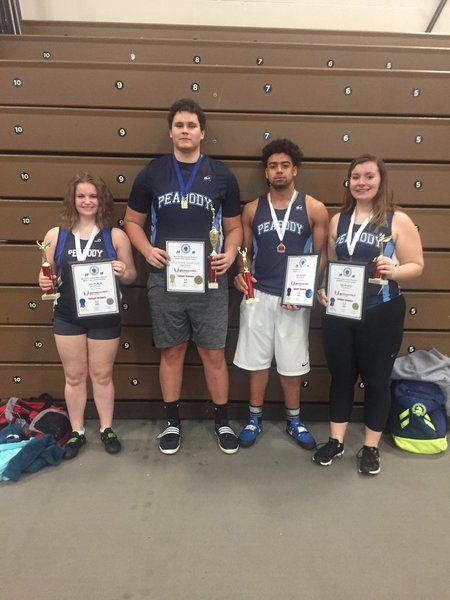 Peabody’s Ramos wins weight throw: At the 8th annual Massachusetts Scholastic Weight Throw, Peabody’s Connor Ramos was the third straight Tanner to take first place with a personal best heave of 59-feet-8 1/2 inches. Dariel Canela was fourth with a toss of 51-feet-10 1/2 and Bishop Fenwick’s Simon Vinci was the runner-up to Ramos’ national qualifying throw with a toss of 54-feet-11 1/4.In the girls event, Fenwick’s Taylor Saggese was sixth by throwing 33-10 1/4. Peabody’s Maddie Nerich was seventh at 33-7 1/2 and Courtney Kline threw a personal best 33-1 3/4.

Newburyport 49, Swamspcott 32: Emme Laundry earned a spot on the Ed Gieras All-Tournament team but Swampscott fell in the consolation game to dip to 9-11 and miss the state playoffs.

Pingree 64, Berwick 26: Senior Emily O’Sullivan scored 10 points on Senior Night and Pingree had a 27 point lead at halftime on their way to improving to 17-5. Colby Shea had a team-best 20 points and Maddy Mandaninci scored 13 for Pingree, which faces Beaver for the EIL title on Friday.

Melrose 4, Peabody 2: Junior goalie Abby Buckley was under siege, making 40 stops despite the regular season ending loss for the Tanners (11-7-2). Mae Norton and Jess Robert scored goals to make it 3-2 after two periods but the visiting Raiders notched the only goal of the third. Paige Thibodeau and Cassie Mirasolo played well for Peabody while assists went to Kaydee Purcell and Sammie Mirasolo.

Saugus 61, Essex Tech 31: The Hawks struggled offensively in their last regular season showing to finish at 10-10. Nick Irving had a team-best 14 points for Essex, which now awaits the D3 North seedings.

BC High 68, Marblehead 49: Sheamus Keaney scored a team-high 14 for Marblehead and Derek Marino scored 13 as the Magicians (12-8) lost their regular season finale.

Marblehead 9, Nantucket 2: Two goals each by Jacob Garfield and Zach Piersol were among the highlights for the high scoring Headers (5-12-5) as they ended their season on a five game unbeaten streak. Will Shull, Dan Kagan and Mike Kagan also scored and Gavin Dowley netted his first varsity goal.

Hudson 8, Peabody 1: Connor McCaron’s first period goal drew the Tanners even at 1-1 but Hudson scored the next seven unanswered to send Peabody to its 19th straight loss.

St. John’s Prep 3, Braintree 3: Brian Carrabes had a goal and an assist but the Prep (13-3-4) squandered a two goal lead and settled for a tie. Ryan Hart and freshman Zach McKennelly also scored.

Lynn 5, Hamilton-Wenham 2: The Generals fell in the championship of their division in the Newburyport Bank Classic tourney and now await the state tournament seeding this weekend. H-W finished the regular season 8-7-5.

Essex Tech 0, Northeast 0: Shane Ahlin posted another shutout in net as the Hawks (8-8-4) ended the year with a shootout win in the Mulloy Tournament that is recorded as a tie for official purposes.